Why the U.S. must invade Canada -- now

It didn't support the war, it's soft on pot and gays, its economy is rolling and U.S. troops are bored. Anyway, reasons to invade countries are no longer needed! 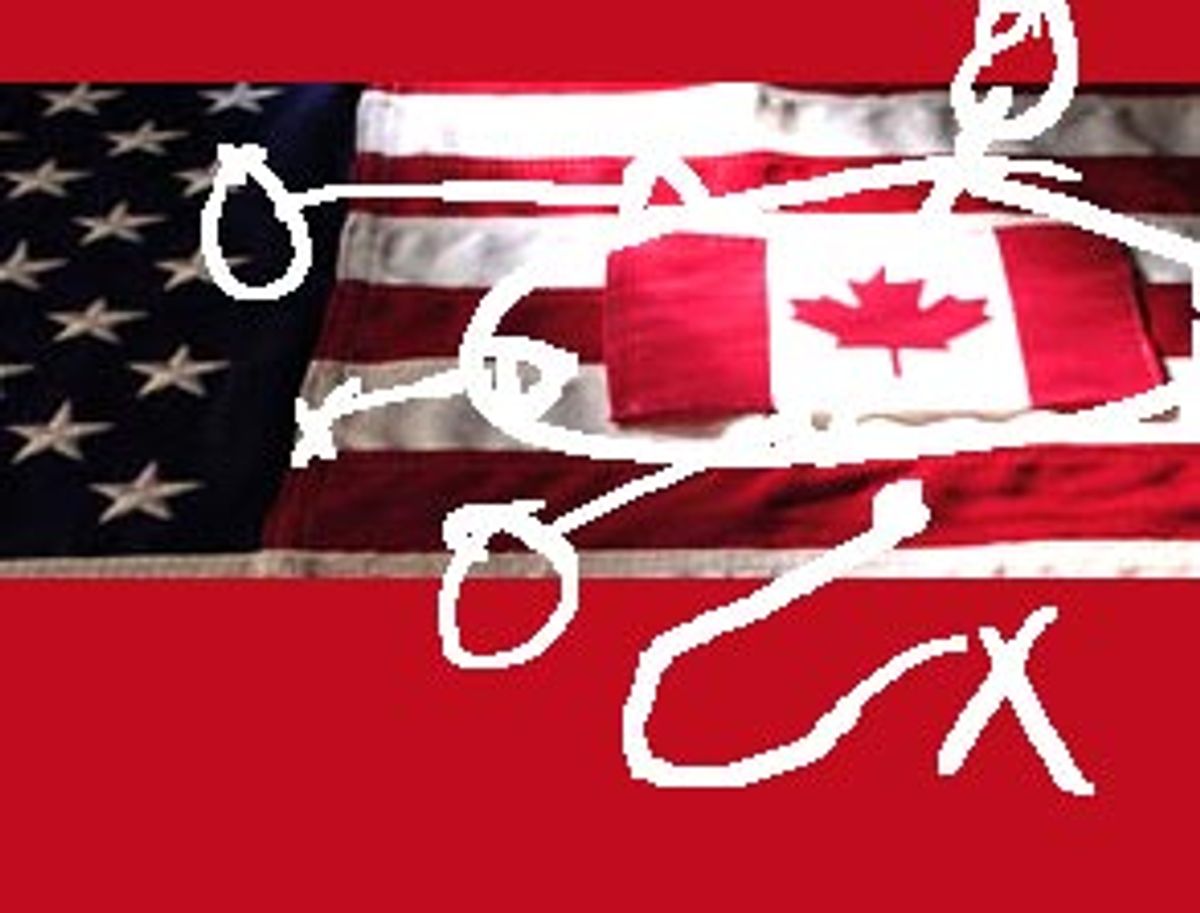 There's nothing like the deep, satisfying belch that follows a good meal. But hey America, what about dessert? Iran and Syria have both been offered up as succulent dishes to follow the Iraqi main course. May I suggest a simpler alternative, right next door? Invade Canada. Hell, we're asking for it.

Canada -- a ripe plum ready for the taking. And the plum was probably imported from Florida, which will make it all the easier. It's not like it hasn't been considered before -- Michael Moore's one stab at a fictional film (unless you count his documentaries) -- was "Canadian Bacon," in which President Alan Alda takes on Canada. The mere convenience of it is enough to justify it -- a regiment in Detroit could blitz Toronto from 9 to 5 and still go home to watch the CNN highlights with the kids every night.

There are plenty of reasons to invade your passive-aggressive northern neighbor. (Or "neighbour," as we spitefully choose to spell it. Doesn't that just piss you off?) But never mind -- thanks to the lessons learned in Iraq, reasons are no longer necessary. The Bush administration's labored justifications for the Iraq invasion, served up as convincingly as a chocolate-smeared 6-year-old's explanation of where the cookies went, proved to be utterly irrelevant. Most Americans, it turned out, were only too happy to kick some non-American ass and didn't really require an explanation. As a prelude to the invasion of Canada, Bush could merely produce satellite photos proving conclusively that American troops are bored. Good enough for most.

So why bother? An excellent question. The United States owns most of Canada already and, unless you're unusually fond of thick socks and earnest magazines, there's not much worth plundering. But the invasion of Afghanistan proves that when sufficiently provoked America will invade and conquer the most God-forsaken acreage imaginable. You might live in an Oklahoma trailer park in tornado season but if you flip America the bird, the troops will come.

Lately, Canada has been flipping America the bird with suicidal abandon. For those who haven't noticed (roughly everyone except Vegas bookies during hockey season), Canada has been acting rather snotty of late. After failing to support the invasion of Iraq, the Canadian government has been embarking on policies that threaten to turn our shared continent into a giant cesspool of sin.

Canadian Prime Minister Alex Trebek (trust me, it's easier this way -- at least you'll be able to picture somebody) has also been profligate in his criticism of America, and President Bush in particular. On his way to the recent G8 summit, with Canada-U.S. relations already severely strained, the prime minister treated reporters to hearty criticisms of Bush's economic and social policies. This after his director of communications had referred to Bush as "a moron" last fall and one of his party members was caught by a reporter's microphone saying: "Damn Americans -- I hate the bastards." Bush's planned visit to Canada, already postponed once in a fit of pique, has now been delayed again until after a new prime minister takes office. (Shania Twain, perhaps?)

Canceled visits are small beer of course, unless they presage a full-scale attack. Justifications are plentiful, if you want to be gentlemanly about it. Consider the moral issues.

Following a recent court decision, the Canadian province of Ontario has begun performing gay marriages. The Canadian government has indicated it will not fight the ruling, but will instead prepare legislation legalizing gay marriage nationally. The resulting influx of gay couples into Toronto is almost certain to spill over into Buffalo, N.Y. This could doom President Bush's chances of carrying the state of New York in 2004. Or, even worse, that giant sucking sound of gay Americans pouring over the northern border could lead to economic catastrophe. Broadway will go dark.

Recent moves to decriminalize pot in Canada may have disappointed Canadians who had been promised more drastic action (under pending Canadian legislation, possession of over 15 grams will still be criminal, less than that a misdemeanor), but they are still worrisome enough to have drawn dire warnings from Washington. During a Canadian speaking tour, Walters said Ottawa's push toward decriminalizing marijuana could "complicate" border security. "Frankly, I'm worried about Canada beginning to look like Mexico as a major supplier of drugs into the United States," he told one Canadian news program. Indeed, there are tremendous dangers here for the U.S. -- a potential Cheech & Chong revival is only the beginning. But never mind the smuggling issue -- that's merely a smokescreen.

Bush's real concern will be the state of the Canadian economy. It's currently outpacing the U.S. quite nicely. Canada's budget deficits are under control while America's soar; the once-pathetic Canadian dollar is climbing steadily against the U.S. buck. Once Americans realize that even a dope-addled nation enveloped in a giggling fog can do a better job of running its economy than the Republicans are doing, it will be curtains for Bush. America's next president will be Dr. Dre. An invasion must begin now.

Or how about a protective invasion for health reasons? A prophylactic invasion, a complete Canadian quarantine to prevent the spread of SARS and mad cow disease. Currently Canada is a festering cauldron of plague, our streets strewn with bloated dead. That's pretty much an accepted fact. Summer tourist traffic is down in Vancouver, B.C., due to fear of SARS. That the only reported SARS deaths (about 30 so far, none recently) have been recorded in Toronto, Ontario -- roughly as close to Vancouver as Los Angeles is to Panama City -- is apparently not important to the American traveler. (Nor does it seem to matter that even in Toronto, SARS poses less risk to visitors than the flying spittle of Mayor Mel Lastman.) The fear of SARS is real, as real as was Saddam's threat to the American way of life. Americans will cheer decisive action.

Mad cow disease could provide another pretext for invasion. So far, mad cow has been a singular Canadian experience -- it has been found in a single cow. (Even that cow may only have been disgruntled.) Still, one dangerous cow is something - tough to sneak old Bessie past Hans Blix.

It's not as if the fever for war would be entirely manufactured, either - certainly not for Canadians. Northerners express a litany of grievances against the U.S. -- for example, the annoying tendency of Bushites to make pious pronouncements about the sanctity of free trade while slapping specious duties on Canadian lumber and grain.

Mostly though, Canadians are galled by the fact that we can get as angry as we want and nobody cares. Our refusal to participate in Iraq drew a few of the usual protests. A Chicago competition for school choirs refused to accept a Canadian group on account of our nation's treachery. (Thank God you can always count on a few dedicated wingnuts.) But for the most part, no one noticed. Why would they? France was snubbing America too, and they have the bomb. Canada's ancient helicopters are more dangerous to their pilots than to enemy combatants; Canada's underpaid soldiers are mostly a threat to default on loans. Hold the "freedom bacon" -- nobody missed our help anyway.

It is this sense of our irrelevance that drives Canada's incessant whining about the States. We're better than you, goes the Canadian refrain -- nobler, more caring, more tolerant, given to smiles and hugs where Americans opt for assault weapons. And yet no one notices. What's the point of being good if Mom's not even watching? So we sit in a passive-aggressive funk and vote for leaders who exact our revenge by pissing in the Rose Garden and running away.