Reese Witherspoon's Elle Woods goes to Washington to valiantly fight for her Chihuahua. Meanwhile, her film's suffering from sequelitis. 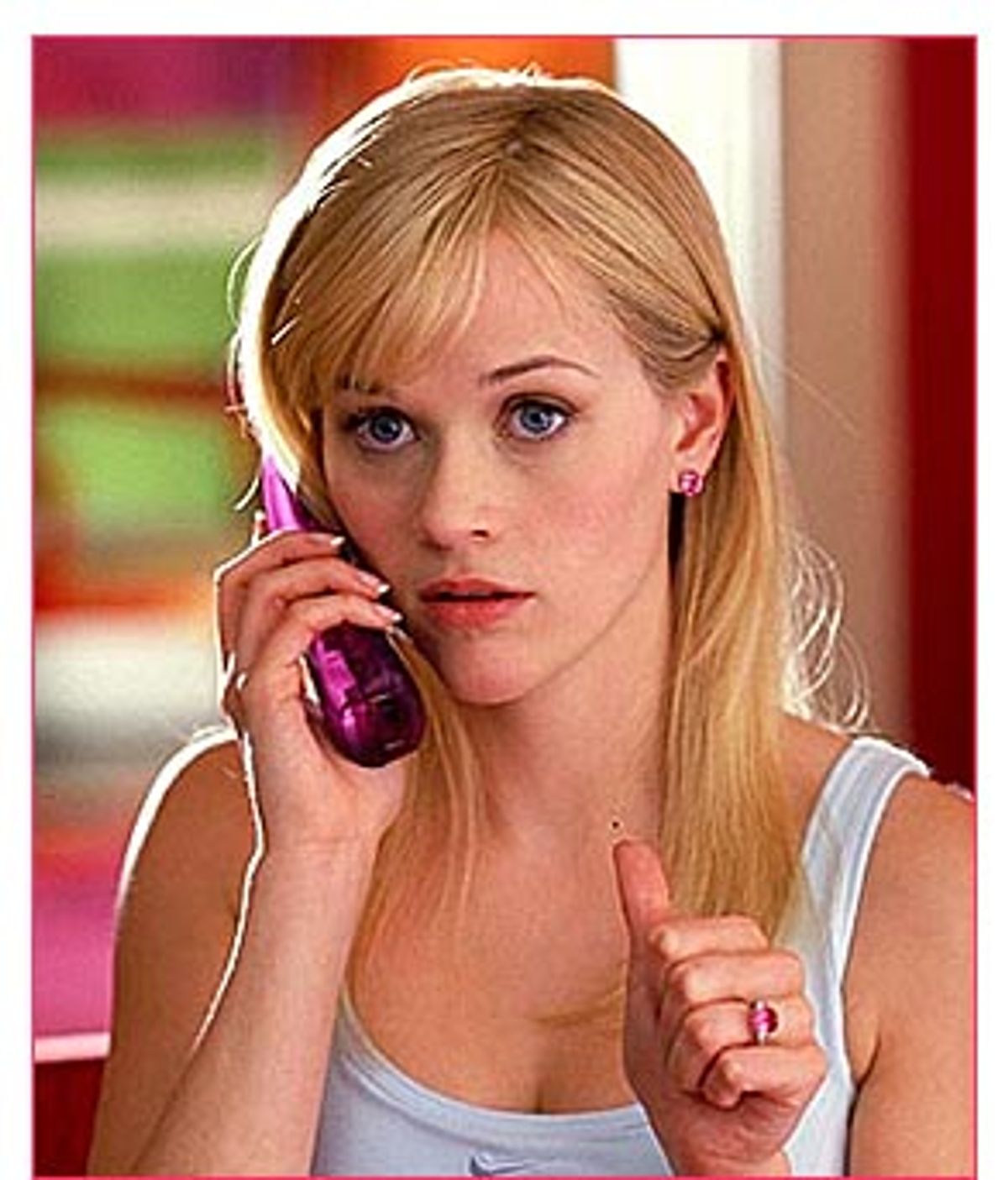 For sheer pleasure this summer, nothing is going to beat Lester Maddox and Strom Thurmond croaking within a day of each other.

The movies are a grimmer prospect.

Sequelitis is a disease that predictably affects big blockbusters, pushing them to be even more spectacular and noisy than the originals and invariably leaving you feeling disappointed. That explains the vague letdown of "X2" and the crashing thud of "The Matrix Reloaded."

For a while, at least, comedies seemed immune to the scourge. There was a period in the '80s when the sequels to big comic hits were looser and funnier than their more successful predecessors, giving more space to their stars to cut up and show off their comic talents. (I'm thinking of pictures like "Ghostbusters II" and "Bill and Ted's Bogus Journey.") But now there is so much pressure on sequels to outdo the originals that even a silly, sweet throwaway like "Legally Blonde" sacrifices its charm the second time around.

"Legally Blonde" wasn't a good movie, but it was funny and painless. The new sequel, "Legally Blonde 2: Red White & Blonde," calcifies everything that was enjoyable about the first movie. "Legally Blonde" was content to tickle you. The new one is something akin to a band that has a surprisingly successful debut deciding to rerecord all their originals and release a "Greatest Hits" collection for their second CD. It's both familiar and off.

In this one, the powder-pink powerhouse Elle Woods (Reese Witherspoon) sacrifices a promising career as a lawyer to go to Washington and work as a lobbyist attempting to stop cosmetics testing on animals. She's inspired by the plight of her beloved Chihuahua Bruiser's mom, trapped in a top-secret testing facility. Elle uses her sorority contacts to get a staff job with one of her sorors, a liberal congresswoman played by Sally Field.

You got it. The movie is "Ms. Woods Goes to Washington," and the comparison would be obvious even if the movie didn't include a clip of Jimmy Stewart as Frank Capra's "Mr. Smith." (Given the undue influence of that inspirational tub-thumper, I sometimes wish Joe Kennedy had succeeded in persuading Columbia chief Harry Cohn to quash it.) Elle has to learn that the real business of politics has nothing to do with her starry-eyed dreams of democracy in action, and that Washington is a hotbed of backbiting and betrayal. And so we're treated to 95 minutes of shots of Reese Witherspoon looking crushed and her wised-up tormentors gloating as she learns her lessons about the big bad world.

The tormentors include not just the partners at Elle's law firm and the lawmakers who won't give her a hearing on the need to save Bruiser's mom but also, regrettably, that sharp, grounded actress Regina King as Field's chief of staff. Regina King has been around the edges of movies like "Boyz N the Hood," "How Stella Got Her Groove Back," "Enemy of the State," "Daddy Day Care" for 12 years now. (She's probably best known as Cuba Gooding's wife in "Jerry Maguire.") She's shown the timing and sass and appealing directness that were prized in actresses of the '30s. There's a school of thought that believes critics are supposed to be circumspect and reserved. But I'm crazy about Regina King, and I can only guess that the reason she hasn't gotten the lead role she deserves is part of the ongoing difficulty black actresses have in getting substantial roles. (If a white actress could sing, dance and act and were as gorgeous as Vanessa L. Williams, she'd be a huge star.) It's no fun to watch her made into the dour-faced villainess here -- it cancels out her spark and her warmth. She deserves better and I hope it's not too long before she gets it.

"Legally Blonde 2" does include some fleeting moments from its talented roster of second bananas. On the New York stage, as in the recent revival of "A Day in the Death of Joe Egg," Dana Ivey shows a wicked sense of farce caricature. She works like hell to put some of that wit into a too-circumscribed role as a powerful congresswoman who becomes Elle's ally. And Bruce McGill, who has a talent for booming, unsubtle heartiness, livens things up as a conservative Southern congressman, one of those guys whose gruffness hides what a softie he is.

Best of all is the flabbergasting Jennifer Coolidge as Elle's beautician friend Paulette. When someone looks like Coolidge does, with a cuddly overabundance of everything (breasts, lips, behind), she's bound, as Coolidge often has, to get cast in the scheming vixen role. But in the Christopher Guest films "Best in Show" and "A Mighty Wind," and as Paulette, she shows something of the blithe obliviousness of Gracie Allen and Elaine May. Like the great moment on the "Burns and Allen" show when George asks Gracie what time it is and she tells him after pulling a clock out of a kitchen drawer and plugging it in, Coolidge's ditziness has an unshakable comic logic. Here, when Paulette puts her ear to a snowglobe and exclaims, "I can hear the ocean!" she damn near persuades you that she can. Coolidge is a va-va-voom siren calling us all to abandon common sense and see the world as she does. Harpo would have recognized her as a soul mate.

As a doorman who has the poop on every D.C. player, Bob Newhart doesn't fare as well, but then the movies have never known how to use his deadpan abashment. But even the performers who do score are operating under elbow-in-the-ribs direction from Charles Herman-Wurmfeld (he directed "Kissing Jessica Stein," though his name would have suited one of the bluebloods who harumphed their way through the first "Legally Blonde"). If you're an adult watching "Legally Blonde 2" you're liable to feel like someone is talking to you as if you were a 5-year-old. Herman-Wurmfeld apparently doesn't trust us to get any of the jokes. Nearly every one is followed by a reaction shot reminding us that what's just happened is really funny! And each time he uses the device, he kills the laughs.

The only performer who truly escapes that deadly approach is Bruiser. Granted I'm a sucker for animal gags, but each cut to this little yapper in an outfit made to match his doting owner's is a reliable laugh getter. In this movie, Bruiser embodies the spirit of chic frou-frou better than Witherspoon.

The humor in the first "Legally Blonde" came from the way Elle Woods' narrow cheerful view of the world, instead of making her the butt of the joke, was the key to how she got things done. It was a perfect role for Reese Witherspoon, whose chipperness can seem almost dementedly comical. She's not bad exactly in "Legally Blonde 2" (especially when she shows up for her first day of work in a hot-pink Jackie Kennedy number, complete with pillbox hat). But like the rest of the movie, she's forced, pushing a caricature that seemed effortless in the first movie. And as adorable as Witherspoon is, you can't help wondering if, at this point, she's going to make a career out of that. You wonder if we're ever going to see the tough, daring, frighteningly intelligent actress of "Freeway" and "Pleasantville" and "Twilight." Or if we're even going to get the tremulousness she found in the caricatured role of professional virgin in "Cruel Intentions." "Legally Blonde 2" is the first movie that Witherspoon has executive produced and she's clearly become one of the few female stars with the power to call her own shots. Let's just hope she doesn't settle for playing nice.