A Brooklyn entrepreneur prints shirts proclaiming that the wearer had sex with everyone from the Strokes to Anna Wintour -- and New York is eating them up. 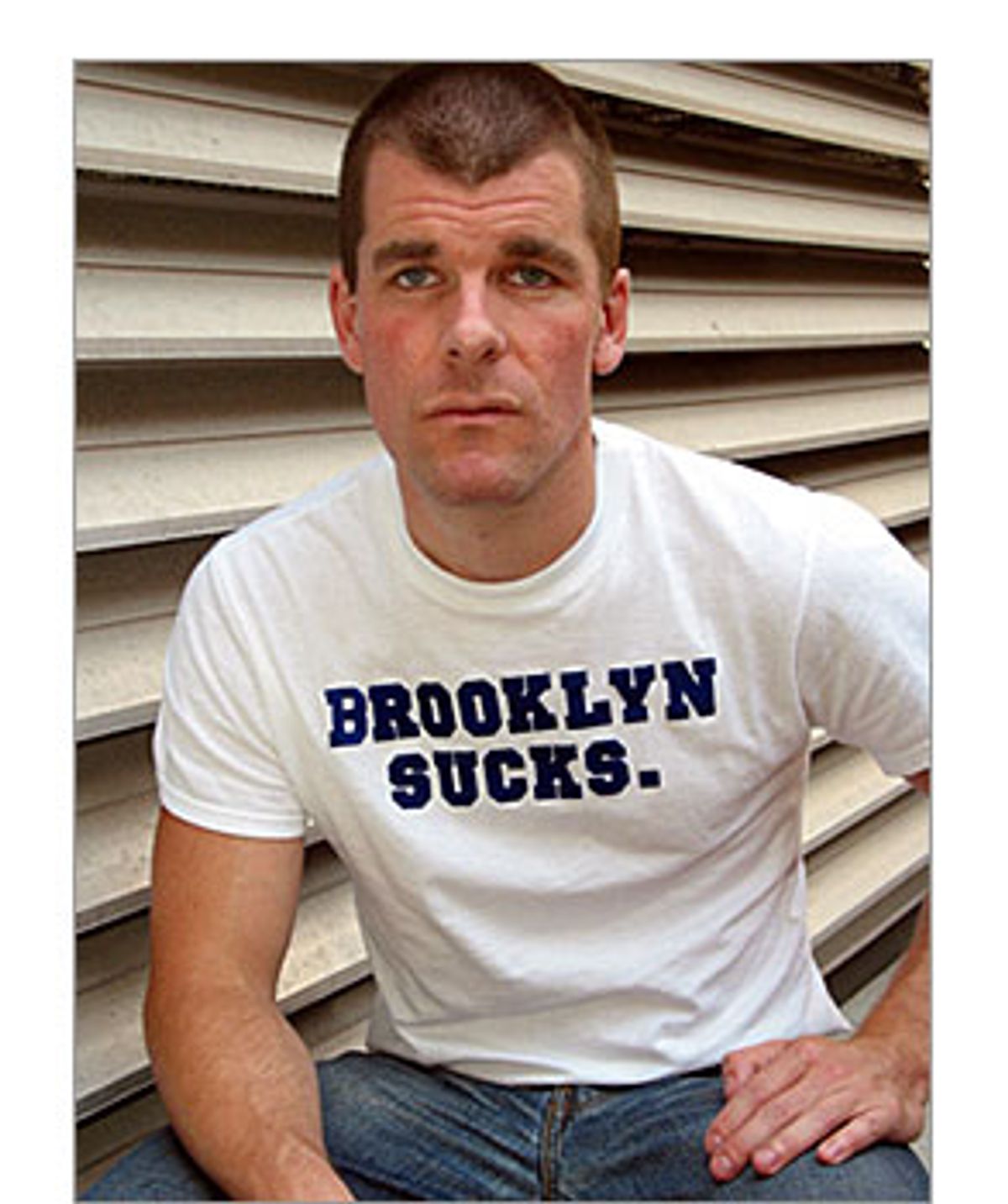 Against one wall leans a rack of 50 or so vintage shirts, almost all of which have been screen-printed with statements like "I Fucked Paul Sevigny" (the brother of actress Chloë Sevigny and a member of the Brooklyn band A.R.E. Weapons) or "I Fucked Anna Wintour" (the editor of Vogue) or I Fucked -- fill in the blank with any celebrity, media personality or downtown New York scenester whose name Courtney can fit onto a shirt. Most of the shirts bear their original logos and slogans with the occasional rugby or polo thrown in for variety. Courtney sells them through his company, Just Another Rich Kid for approximately $80 each, and they've become a hot item in New York, where the revival of '80s synthesizer music, Flock of Seagulls haircuts, leg warmers, and heavy black eyeliner have heralded the age of ironic fashion.

The combination of Courtney's text and the original logos is often intentional and the results can be amusing -- and at times, disconcerting. A black D.A.R.E. T-shirt -- a vestige of Nancy Reagan's drug wars -- sits beneath the text: "I Fucked Kurt Cobain," a heroin addict who killed himself. After hearing about the T-shirts from a friend, I ordered one that reads "I Fucked David Remnick" (the New Yorker editor), with the letters centered around a Champion logo.

To a casual observer, the lists and the T-shirts could easily be mistaken for the obsession of someone who has spent too much time watching MTV and reading US magazine. But as Courtney explains, it's all part of an art project he calls "The Commodification of Celebrity."

"Everyone's trying to be cool by name-dropping, associating themselves with celebrity," he says, rolling his eyes. "Instead of doing this slimy name-dropping thing, I was like, well, why don't you just put it on a shirt? Take it to, like, the nth degree. Not 'I sat next to Paris Hilton at a concert' or 'I saw Danny DeVito at a restaurant,' but 'I fucked Paris Hilton.' The literal interpretation isn't there. It's more just name-fucking, using this commodity of the celebrity name to buy coolness, or insider status, or whatever."

As Courtney explains his various "theories," he becomes more animated. Every time his athletic frame relaxes into his computer desk chair, his body tenses a few seconds later as he leaps up to find another vestige of a previous exhibit, a printed-out e-mail, or an article that demonstrates his point. His eyes widen and his tenor voice reaches a crescendo at the end of sentences, which he often punctuates with a "You know?" and a furrowed brow that indicate he's not entirely sure he buys his own explanations -- or that you do. Occasionally, he pauses in the middle of his discourse de la célébrité, letting his eyes wander to some invisible spot on the wall or ceiling, running his hand through his close-cropped brown hair, and wrinkling his nose as if searching for one last piece to tie all of his ideas together.

The walls of Courtney's apartment are decorated with large, Rothko-esque abstract paintings that he created over a year ago. Bright blocks of orange, yellow and black are arranged with precision on rectangular canvases interspersed throughout the living area and bedroom. The paintings, the lists and the shirts were recently part of a small exhibition at Duke University titled the "New American Dream." A friend of Courtney's at the university contacted him about exhibiting the paintings as a stand-alone project in a student center gallery, but Courtney took the opportunity to add the lists and shirts to the mix, to use all of his "art" to elucidate his philosophies about celebrity.

"I think our past heroes -- the people we used to be into -- were Nelson Rockefeller and Oprah, Bill Gates, Madonna," says Courtney. "People who had actually done something." (Lumping Nelson Rockefeller and Madonna in the same category? That's a new one.) His work, Courtney explains, is about instant, overnight celebrity -- celebrity for no reason and fame for simply existing. Reality TV stars, naughty White House interns, and party-girl hotel heiresses.

Every American? "I don't know that they want to deal with the reality of it," he says, "But even my mom. She'd want to be a Hollywood star. I feel like it's almost un-American to not want to be famous."

OK, I say. His shirts seem to illustrate this point. But where do the paintings come in?

"I had these three paintings," he says, gesturing to the abstract canvases on the wall. "One of them was called 'Eminem,' one of them was called 'Andy Warhol,' and one of them was called 'Lil' Kim.'" What do big blocks of color have to do with Eminem? Nothing, Courtney says. "Because people are so trained to recognize [Eminem's] name, it engages them in a dialogue, and they don't know why they're in it. They're trying to figure out why it's named Eminem." In other words, they're tricked into interpreting the painting through the lens of a celebrity ideal.

Warhol did something similar, says Courtney. "When Warhol did Marilyn Monroe, he used the commodity of her face to get attention for his paintings. If he'd just used me or you or his mom, no one would care. Not to devalue the fact that he did it in twelves or nines or silk-screened. Presentation was important. But it's still Marilyn Monroe."

As Courtney waxes poetic about Andy Warhol, my gaze drifts back to the lists on the wall. "What about the lists?" I ask.

"I went to a Web site and found out what the top eight plastic surgery procedures are," says Courtney. "What the top eight abused prescription drugs are. A list of high luxury brands -- Lear and Cartier and Rolls-Royce -- those unattainable things that only really rich people can get. And then a list of eight things that I think people want from fame -- sex, beauty, agency, wealth, access, control, happiness, validation..." The lists, Courtney says "show another side of being famous -- having to perfect oneself for the public." The media, he says, fabricates unrealistically pristine images of celebrities that make normal people feel inadequate, and as a result, normal people try to pursue the accoutrements of fame.

"I think people are getting really complacent," says Courtney. "We're getting really lazy and gluttonous, and everybody wants to make $2 million and have a Hummer and drink Cristall. I don't want to be a nihilist, but I feel like we're just pushing toward that point where the seams are popping."

The youngest of four children, Courtney grew up in what he describes as a "straight-up small-town middle-class family" in upstate New York, where his father worked as a salesman for R.J. Reynolds. He majored in psychology at Cornell before heading to New York in 1997 to try to make it as an artist. For all of his disdain for celebrity, Ken Courtney is currently enjoying a degree of it himself. Just Another Rich Kid shirts (Courtney says the name of his business was inspired by all the "kids in the city who portray themselves as struggling indie artists but when you delve a bit more you find out their godmother is Mary Boone or something") have appeared in several European fashion and art publications, and Courtney's name has appeared in bold on Page Six, the New York Post's notorious gossip sheet. "For some reason I was just flipping through the Post," he says. "And I looked at the highlighted names, and I saw 'Ken Courtney' and a reference to the shirts and I thought, That's so weird."

His own minor celebrity doesn't heavily affect Courtney's lifestyle, because as he points out, a press mention here and there doesn't necessarily mean he's minting money from the project. He runs the entire operation out of his tiny apartment and says he gets two or three requests a day for shirts, which he screen-prints in his apartment, often late at night. He has "two and a half" unpaid interns: art, design and fashion students who responded to an ad Courtney posted on Craig's List for help with an "indie men's shirt line." They help out with the business paperwork, button sewing, and assorted other shoestring-shop activities. "I spend a lot of time standing in line at the post office," he says.

Courtney isn't sure how many shirts he has sold or how much money he has earned, and it's not always apparent to onlookers that Courtney's operation is fundamentally an art project. "I like to think that everyone thinks like this. Then I remember that I'm living in New York," he says, laughing. "I'm making fun of all of us for being celebrity obsessed. But I don't like explaining it to people if they don't already get it."

And not everyone gets it. The Strokes' merchandising company, Blue Grape, recently issued Courtney a cease-and-desist letter for manufacturing "I Fucked the Strokes" T-shirts after spotting one in a fashion layout in Time Out New York and another in Vice Magazine. "They thought I was making a ton of cash from it," says Courtney. "I made two shirts! Neither of which sold!" Blue Grape is demanding that he recall the "I Fucked the Strokes" shirts and send all of them to the company's law firm, where they will be destroyed. Ah, the torments of being an artist!

Ironically, some of Courtney's other detractors think the T-shirts are a literal incarnation of the status-grubbing attitude they skewer. Courtney shows me his favorite piece of hate mail. It reads, "I saw your site and have this to say: I hate you and everything you represent. Your 'clothes' are a fuckin' scam. Whatever it is that you consider 'cool' fucking sucks. Anyone stupid enough to buy your bullshit deserves to wear it so that when they are seen in the street, everyone will know that they are retarded. You iron on ugly letters, inane artfag phrases, and wack images onto thrift store refuse, then sell it for a lot of money to assholes who think they are so fucking stylish. YOU HAVE NO SOUL. You and your ilk are a bunch of T. Rex lookin, Fraggle Rock rejects who need to bathe. You are wack enough to get off on this hate-letter. DIE."

Apparently, Courtney is wack enough to get off on the hate letter. Laughing, he pulls out an ad he created from the text of the e-mail. The phrase "T. Rex lookin, Fraggle Rock rejects" is circled in red.

Courtney acknowledges that he, and his popular "star fucker" shirts, will soon face the end of their 15 minutes of fame, but says that even as that moment approaches, he has other projects lined up. The shirts are only one part of the Just Another Rich Kid line, and Courtney says he has new designs in the works. He'd also like to install the "New American Dream" exhibit in New York "if I can find a gallery to show it."

As I cross back into the living area, I notice yet another list, carefully spelled out at eye level on the wall in black stick-on letters: "Mirror, Sell Shirts, Job, Steamer, Video Camera, Studio, Foam Core, Spoons, Tissue Paper." A statement about the accoutrements and pressures of life as an artist? "Oh, that's just stuff I need," says Courtney with a laugh.

Elizabeth Spiers is the editor of Gawker.com. She lives in New York.