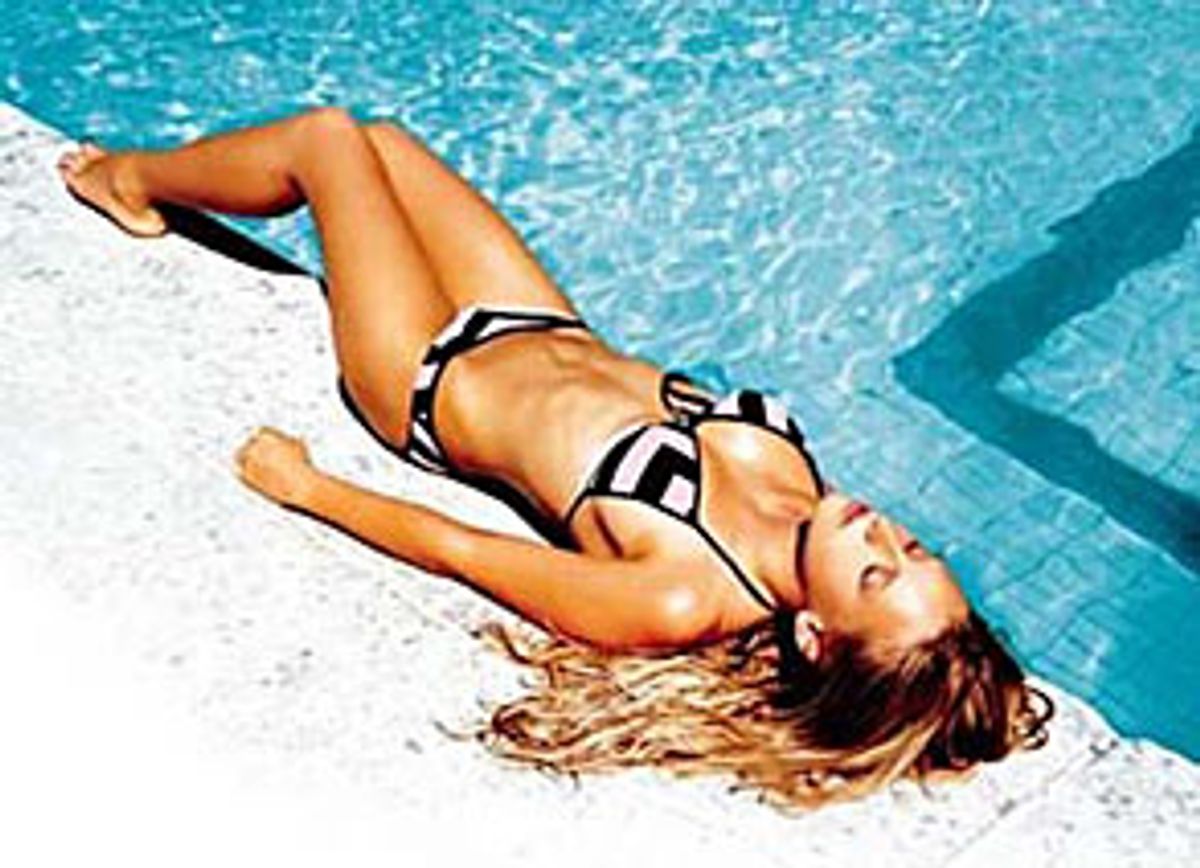 Americans may not understand the French very well, but one of the darkly glittering jokes of François Ozon's "Swimming Pool" -- at least in the places where it's funny at all -- is that the English understand them about as much as we do. Or, perhaps, the English understand them better and like them less. Charlotte Rampling plays Sarah Morton, a taciturn, attractive but passing-middle-age English mystery writer who has borrowed her English editor's French country house to get some work done. It doesn't matter whether you're French, English or merely from Ohio: Sarah isn't going to like you, because she doesn't like people much at all.

But Sarah does like her solitude, and she blossoms in her first days at the boss's vacation home, stopping in for routine comestibles at the local market or enjoying refreshment at an outdoor cafe where she even tentatively flirts with one of the waiters, a strapping, tanned, mustachioed holiday dreamboat named Franck (played by the appropriately named Jean-Marie Lamour).

And then, heralded by the clatter of high-heeled mules and the gentle swoosh-swoosh of her downy, sun-gold butt cheeks brushing against each other ever so slightly, the boss's luscious young half-French daughter arrives, taking up residence in another bedroom of daddy's splendid second house. Julie (Ludivine Sagnier) disrupts Sarah's routine, which of course makes Sarah very, very cranky. But Sarah also becomes fascinated by Julie: fascinated by her ever swinging moods, by her seemingly endless string of sexual conquests, by the sketchy, sad-sack tale she spins of her troubled, failed-writer French mother. Julie's appearance jump-starts Sarah's writing, and the two form an uneasy bond that's galvanized by an unexpected event -- the kind you dial "M" for.

Ozon co-wrote the movie's script with Emmanuèle Bernheim, with whom he also collaborated on the snoozy grief drama "Under the Sand." (Bernheim also wrote the screenplay, based on her own novel, for the lovely "Friday Night," Claire Denis' most recent movie.) It's clear Ozon is having some fun this time: "Swimming Pool" isn't nearly as dreary as "Under the Sand" (although Rampling, as a woman whose husband goes missing, did manage to infuse that picture with a sweet-edged melancholy that felt believable and real). And "Swimming Pool" is not nearly so pleased with itself as Ozon's Agatha-Christie-via-Jacques-Demy kitschfest "8 Women," with its bright but stiff colors and its numbingly static musical numbers. "Swimming Pool" is very funny in places, particularly when Sagnier and Rampling are rankling each other and yet growing, grudgingly, to like each other despite their differences -- which they conveniently label as differences between the French and the English but are really something else altogether.

Much of the action takes place around the country house's swimming pool, a bright blue rectangle that sets both the stage and the mood for the story. At one point, Rampling lounges in a poolside chair, practically buttoned up to the neck in a printed cotton blouse. Julie, topless after her swim, sidles up to her and launches into a chattery treatise about the difference between the ocean and swimming pools. It's impossible, both for Sarah and for us, to concentrate on what Julie's saying as her pert, gorgeous breasts flash at us like accusatory headlights. Those breasts are something of a recurring sight gag in the movie -- using a sort of psychosexual remote control, Julie knows that all she has to do is whip off her top and she can start or stop the story's action at will.

Rampling is interesting to watch as her catlike distrust of Julie turns into a kind of admiration. When she breaks down and finally shares a joint with Julie, there's something howlingly funny about the clipped, precise way she says, "I was around in swinging London" -- and Rampling knows it. Sagnier (who played the pixie Catherine in "8 Women"), in addition to looking pretty fabulous in very little clothing, knows how to do petulant, pouty and unstable, and she plays off Rampling's straight-arrow coolness nicely.

"Swimming Pool," done up in sunny blues and golds, certainly looks beautiful (it was shot by Yorick Le Saux). And yet, like other Ozon movies, it feels lifeless and freeze-dried -- in the end, it's more about its own ideas than it is about actual characters. The reflective surface of Ozon's swimming pool is probably supposed to show us hidden bits of ourselves, our foibles and follies and fabrications, the things we can't bring ourselves to admit we desire. But what really happens is that we walk away muttering to ourselves, "How 'bout them headlights?" So much for the nuance of cinema.