"Pirates of the Caribbean: The Curse of the Black Pearl" 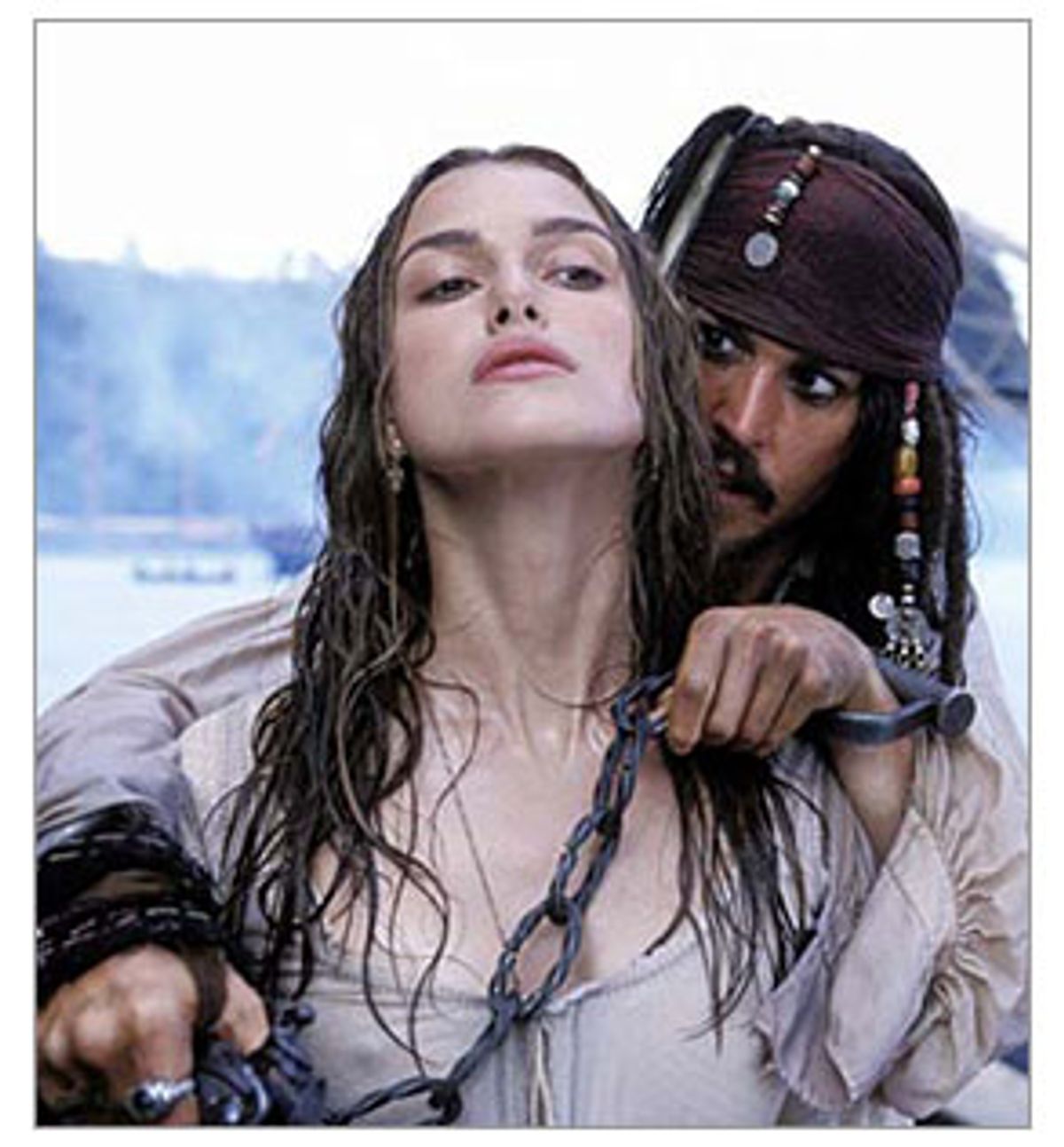 These days action movies are so ubiquitous, and generally so badly made, that many critics -- subconsciously or otherwise -- grade them on the curve. "Not as bad as it could be" becomes high praise for a picture when you can't help comparing it to the stinker you saw last week.

But "Pirates of the Caribbean: The Curse of the Black Pearl" -- a swashbuckler, which means it's an action movie in its purest form -- is so almost-good that it doesn't deserve the insult of being graded on the curve. Haul out the pitted but trusty old spyglass and you'll see that the picture's mood is all wrong in too many places: It feels overvarnished and forced when it should be disreputably exhilarating, and the action bullies its way from place to place so that, instead of moving the story along logically, it simply puts people in places where exciting things are likely to happen. (Does it cost more to give us a plot that makes sense? Or does it simply demand thought, which in Hollywood seems to be in shorter supply than money?)

One thing's for sure: "Pirates of the Caribbean" seems poised to give audiences something they're hungry for, and it's something they deserve. The movie strives for the mood and energy of an old-fashioned swashbuckler -- something along the lines of those marvelous Douglas Fairbanks pictures like "The Black Pirate" -- and sometimes its sails actually catch wind. Johnny Depp is Capt. Jack Sparrow, a notorious rogue of the high seas who is nonetheless ruled by certain codes of decency; his ambiguous intentions, shifting like the rays of the sun, are part of his charm.

The ruthless and wrinkled pirate Capt. Barbarossa (Geoffrey Rush) has made off with Sparrow's ship, the Black Pearl, ditching Sparrow on a handy deserted island. But Barbarossa has a problem: He and his crew have stolen some cursed gold (the pirate's equivalent of eating bad clams), which has turned them into living skeletons. What's a pirate to do if he's unable to sleep, eat, drink or enjoy women -- even in a PG-13 adventure? Barbarossa and his crew swoop into a British outpost known as Port Royal to capture the governor's daughter, a luscious lass named Elizabeth (Keira Knightley), who just may hold the key to the restoration of their vigorous lusts and appetites. Elizabeth's almost-boyfriend, swordmaker and cutie-pie Will Turner (Orlando Bloom), and Sparrow set out on a dual mission: Sparrow wants his ship back; Turner is determined to rescue his girl before her bodice is ripped (or worse) by someone else.

That's just the beginning. Plenty happens in "Pirates of the Caribbean" -- so much that it becomes a bit hard to keep track of what's going on and why. I felt a strong desire to be swept away by the picture, even as I was tugged back by the undertow of everything that's wrong with it. Director Gore Verbinski ("The Ring") tries to keep the story moving along swiftly, but it gets bogged down by a million and one cumbersome elements. (Barbarossa and his crew spend an inordinate amount of time trudging back and forth between their ship and an island cave loaded with glittering treasure -- you get the feeling they keep coming back to the same location just because it looks so damn cool.) The movie is patchy and uneven; it moves like a shot in some places and trundles laboriously in others, as if it were rendered spellbound by its own magnificent size and scale. "Pirates of the Caribbean" is a giant picture if ever there was one, with lots of massive, elaborate sets, not to mention some fabulous-looking sailing ships. Sometimes it seems blinded by its own dazzle.

But when "Pirates of the Caribbean" is good, it's certainly something to behold. Cinematographer Dariusz Wolski makes everything look clean and bright -- the sails of the good guys' ships are bleached and gleaming, a gorgeous contrast with the impossibly vivid blues of the sky and the sea. And this is an action movie with real action, in which computer effects are used judiciously. The fight sequences are nicely choreographed and reasonably well shot. (I'd have preferred more full-body shots and less cutting, but you can't have everything.) Bloom and Depp are adept at swordplay, and it's a pleasure to watch actors who are attuned to the beauty of real-life movement, as opposed to just coasting on whatever fancy effects might be sketched in later.

And "Pirates" features one extraordinary effect, which is used several times throughout the picture without ever losing its impact. The ghost crew of the Barbarossa look like normal men in ordinary light -- but moonlight reveals them in their true state. So by day we see a ragtag bunch of fellows in shabby clothes with warts and gingivitis; but in the moonlight they become clattering skeleton specters straight out of Ray Harryhausen. When any of these troubled, cranky fellows strays into a shaft of moonlight, we get a glimpse of him as part man, part skeleton, a sorry prisoner locked in the bony cage of his own greed. The effect is so beautifully rendered that you almost forget it's computer magic and not the real kind -- and that's the hardest feat for special-effects people to pull off these days.

Poetic as those moonlit skeletons are, though, the movie around them, despite how pretty it is to look at -- is too cluttered to summon the necessary aura of high-seas romance. The story, conceived by Stuart Beattie, Jay Wolpert, Ted Elliott and Terry Rossio, is something of a complicated mess. But the script, written by Elliott and Rossio (the team that gave us the sometimes overworked "Shrek," as well as the much more relaxed delight "The Mask of Zorro"), has a breezy, left-of-center feel, and some of the jokes, both the visual and the verbal ones, are pretty zingy. (There's some grisly fun with a pirate's fake eyeball, which becomes a running sight gag: It gets popped out and plonked back in repeatedly, not to mention speared with a speeding salad fork.)

Any scene here that features Depp is pure pleasure: He's true north on this movie's broken compass. As Jack Sparrow, Depp gives in to his craziest, boldest impulses. He goes over the top but takes us with him as his giddy, giggling accomplices. Depp wriggles his eyebrows seductively; he pouts like a starlet. Every one of his expressions is writ large: This is a great silent-screen performance, only with talking.

Depp carries himself with a delicate swagger, slinging his lines as if he were casually flinging a silk scarf around his neck. His velvet-brown eyes speak volumes even through all that Adam Ant eyeliner. Depp is a glamorous glam-rocker of a pirate, and he cuts a ridiculous and lovely figure. His beard descends from his chin in a waggle of stiff little plaits, each capped with a decorative bead; his hair is a mass of swinging dreadlocks, also trimmed with beads. He looks like Keith Richards on a good hair day. His brow is wrapped in extravagant but tattered silks, and sometimes the look is topped off with a beat-up but waggishly elegant tricornered hat the color of dust.

In case you think costume designer Penny Rose went totally overboard on Depp's outfit, note that its zaniness has at least some historical foundation: In his rip-roaring study of real-life 17th century pirate William Kidd, "The Pirate Hunter," Richard Zacks explains that pirates often went about in outlandish outfits they concocted themselves from plundered fabrics. They were also known to totter about in fancy, ill-fitting shoes, also stolen -- in the pirate world, vanity trumped comfort.

Depp prances through "Pirates of the Caribbean" as if it were a much lighter, less top-heavy movie than it is. When, engaged in a fight with Will Turner, Sparrow makes a less-than-gentlemanly move, Turner exclaims, shocked, "You cheated!" Depp replies, with a blasé shrug, "Pirate." That's the only word Sparrow needs to explain himself, and it's the only one that adequately describes how much Depp gets away with here. What about the superb special effects, the fancy script, the giant ships and the big fat plot? According to the sacred rules of summer blockbusters, shouldn't all those things add up to more than the tossed-off performance of one actor? How can one little guy steal a whole movie as if it were a rope of pearls that could be stuffed in his pocket?