While the rest of the networks' reality fare wilts in the heat, a mix of Bible thumping, boa constrictors and the evil genius of Tyra "Tyrant" Banks makes "America's Next Top Model" a refreshing surprise. 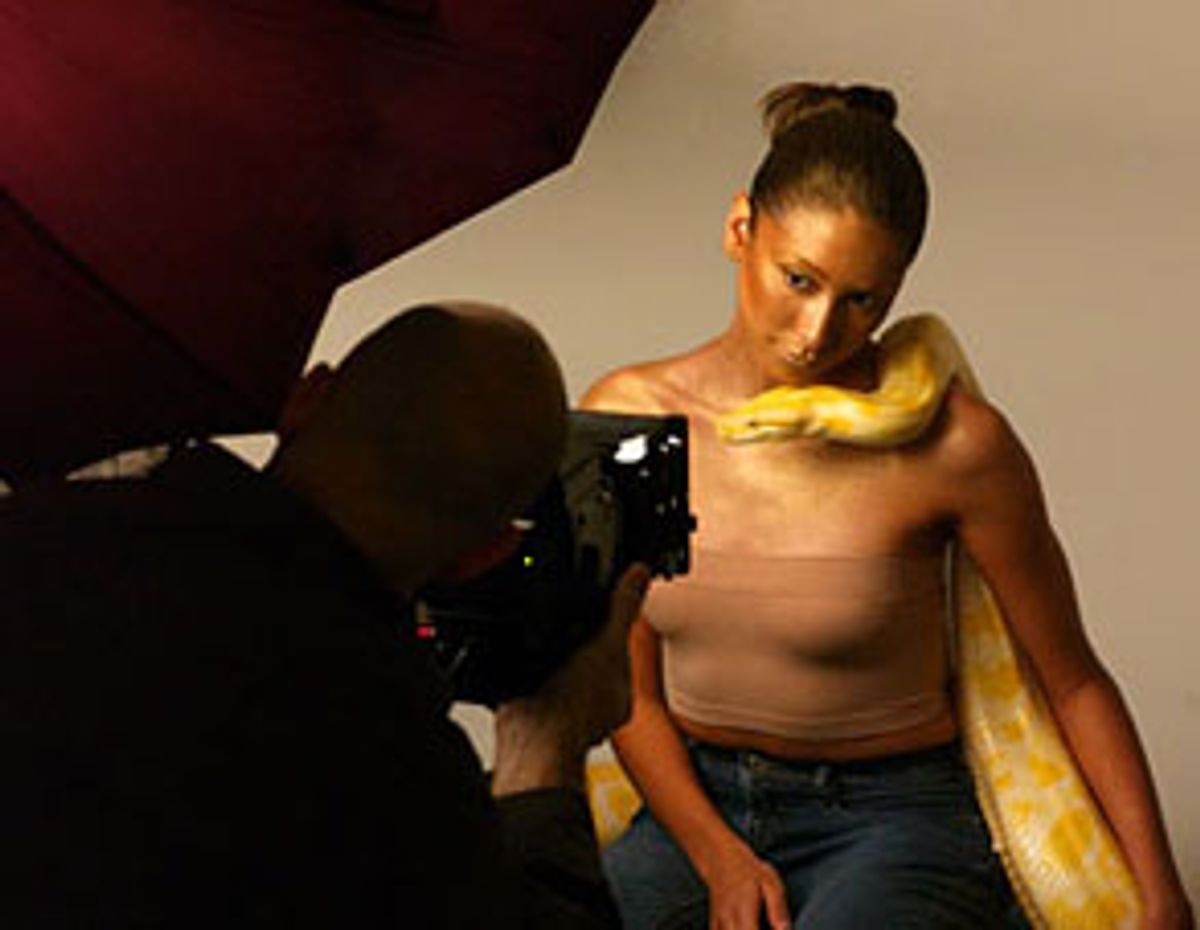 One early summer night about five years ago, I found myself at a small gathering in the Hollywood Hills populated primarily by models. My boyfriend was also there, unfortunately, with two of his oldest childhood friends, one of whom was dating one of the models. Since it was hot that night, and there was a pool at the house, and they were models, the women stripped off their clothes and jumped in the water. Did I mention that they were models?

Delighted, my boyfriend and his two friends got naked and also dove into the pool, which was now filled to the brim with naked models. As I bade my time by the side of the pool, my mind raced through all kinds of weak, pathetic thoughts. I wanted to rewind the night and drink several more glasses of red wine at dinner. I wanted to rewind the year and join a gym. I tried to will myself to strip off my clothes and frolic with the models, but I felt certain that someone would shout, "Who threw a lumpy mortal into our model soup? Would somebody please fish it out already?"

Models are scary. I don't mean that in a "they make me sick" way, or a "they're beneath me" way. I mean that models frighten me. It's not just that they're absurdly attractive. It's not just that they make tons of money and get to travel the world. It's not just that they tie their hair in a rough knot and wear pajama pants to dinner and look gorgeous while, dressed the same way, I look like William H. Macy. Models have some combination of premature world-weariness and a lifetime of being told that they're beautiful every four minutes that ferments into a calm confidence, a confidence that allows them to look you straight in the eye, chain-smoke, and send their pasta back because it's not really vegan, all at the same time.

Despite the obvious thrills of model-centric programming, "America's Next Top Model" (Tuesdays at 9 p.m. on UPN) was by no means a sure thing. First, there's that ridiculous title, which, as far as absurd claims goes, takes a close second to "Paradise Hotel's" repeated insistence that it's shot at "the most exclusive hotel in the world." Second, the E! channel already has plenty of model-related offerings, including countless shows that feature models in their natural habitat striding down runways, pulling their clothes off backstage, getting their makeup done, and discussing the creative genius of whoever's fashions they're wearing at the time. Such shows are addictive to the fashion-obsessed, and mildly amusing to the rest of us, but we'd never seek them out. Finally, so many of this summer's shows have been ineptly produced, shoddily edited leftovers from the regular season, that the outlook for a little UPN show was less than stellar from the start.

Little did I know that, under the borderline-sadistic tutelage of the show's creator, Tyra Banks, tempers would flare, claws would be bared and egos would bloat beyond recognition. Although Banks has a bad habit of tooting her own horn endlessly while the cameras roll, she may be justified in doing so, since, from the opening graphics to the hip-hop soundtrack, her show has been undeniably imaginative and engrossing.

Now granted, any program that features women this attractive dressing up like Barbies and stripping down and dressing up again can't be all bad. But one of the best moves by Banks was to hire some of the most elitist, outrageously bitchy fashion industry types she could find to torture the girls, from "runway diva" J. Alexander, who pranced down the runway in high heels, then berated Elyse, the sharpest by far, for wanting to go to medical school, to outspoken judge Janice Dickinson, a former model who, as she repeatedly reminded us, coined the term "supermodel" years ago, and who recently appeared on Dr. Phil to discuss her addiction to plastic surgery. In fact, all of the judges were entertainingly egocentric yet oddly charismatic, and none were afraid to state their opinions or lash out at the others when they felt so moved.

But Banks' excellent casting choices were most apparent when ultra-whipped Nicole refused a chance to go to a "major fashion event," because, according to the other girls, she wanted to stay home and call her boyfriend. Makeup artist Jay Manuel responded to the impending crisis in the only way he knew how: by insulting Nicole until she was near tears.

Nicole: "I'm not feeling that well, I have a little stomachache ..."

Nicole: "Well, if I'm cut because of this, then that's just silly."

Jay: "So then it's silly, and you go back home, and you do what? Work at Burger King?"

In Jay's mind, you see, if you're not a part of the fashion world, you're just another slob out there flipping burgers. Somehow his ruthlessness was contagious, though, because by the time they cut to Nicole on the phone with her boyfriend that night, we could almost picture her with a little orange and brown hat on her head.

Continuing in the same sadistic vein, each week the group was forced to pose in increasingly harsh conditions that ranged from uncomfortable to excruciating: on freezing cold rooftops in bikinis when it was 8 degrees outside, in lingerie on top of a hot male model, or half naked with a boa constrictor, culminating in a nude shoot in which Bible-thumping Robin refused to participate. But the fashion shoots were the least of their worries, since the women had to prance seductively in 8-inch stilettos, navigate the subways of Paris under a deadline in a scene straight out of "The Amazing Race," and subjugate themselves to a mandatory on-camera bikini wax.

Remarkably, at least one of the contestants kept her perspective given the arduous tasks before her. When asked about the hardships of modeling, Elyse told Steppin' Out Magazine, "There are hidden difficulties like refraining from cuticle picking, relaxing protruding neck tendons, and creatively concealing scoliosis. All in all, though, as you may guess, it's not hard labor. I suspect it is significantly easier to march back and forth 50 yards in high heels than it is to mine coal or build bridges."

Indeed, the women's worst enemy continued to be each other. First, the ever-preaching Robin was horrified by Elyse, a self-proclaimed "militant atheist," and expressed her tolerance by showing Elyse a verse from the Bible that read, "Foolish is the man who says there is no God." Next, Elyse lost her mind and attacked everyone in a private bitch session with the camera. A sample: "Giselle, you fucking worthless cunt. You are so wasteful, bitchy, stupid, you're worthless. Your parents must be ashamed of you." Soon thereafter, Ebony's girlfriend visited, and Robin loudly proclaimed that she "disagreed" with homosexuality. "Ebony is a lesbian, and I find this offensive," she sniffed. "Everybody has to deal with their own sin." Then, the group decided that Elyse had an eating disorder, and worked themselves into a lather over it without bothering to discuss it with Elyse.

Yes, these are the kinds of ugly, ridiculously petty battles that shallow freaks like myself live for. But what's truly amazing is that, through all their sniping and battles, most of the contestants became more and more likable. Elyse, who was entertainingly blunt but a little too harsh early on, proved to be remarkably smart, funny and good-natured, considering she had a severe disdain for the whole production. Adrianne, whose behavior alternated between goofy, melodramatic, naive and clever, wound up creating some of the best moments and tossing off the funniest one-liners of the show. Even Shannon, who was exceedingly strait-laced and dull, turned on the charm, loosened up, and managed to win the affections of the judges. Were there real, gradual changes in these women's attitudes, or was the illusion of the perfect character arc created by some seriously skilled editing? Only those tricksy postproduction editors know for certain.

The only contestant who became less and less bearable was Robin, who, by last week, found it impossible to contain her disdain for the sinners around her. Forced to cut the group down to three, Janice envisioned a tiny step up from Jay's fast-food job for Robin when she argued in favor of her elimination: "It's clear that Robin doesn't have the personality to be a top model. She should be working at Avis!" And so the judges sent Robin off, and wished her the best of luck with her future offering the Good Word to unsuspecting callers seeking little more than a midsize sedan with power steering.

Then, in the shocker of Tuesday night's finale, Elyse, widely favored to win it all, was eliminated halfway through the show, leaving shy blond Shannon and rocker Adrianne to battle it out for the title. Elyse's parting words were surprisingly humble: "Tyra told me that I was arrogant and condescending in my speech and in my interactions with others, and I think that she was right." Adrianne put it a little differently: "I would think I would go home up against Elyse, just because she's a genius, and I'm a high school dropout." Lucky for Adrianne, though, it seems that dropouts have a much easier time shaking that ass without smirking and rolling their eyes.

When it came down to the final fashion show, the judges agreed that "all-American virgin" Shannon had the edge despite weeks of appearing too blandly mainstream to make it in the world of high fashion, whatever that is. Still, Adrianne's pictures were undeniably better, plus the judges just seemed to like her a little more. So, Adrianne was awarded a modeling contract, a photo shoot and some other stuff, along with the dubious title. She was duly moved, and in her typical understated fashion, claimed that her life, plus the lives of every member of her family, would be happy and perfect from that day forward.

The rest of us, of course, are left to flip burgers and book rental cars, deriving what little joy we can from the promise of an eventual second season of "America's Next Top Model."