To my 3-year-old daughter, I am love incarnate. To my teenage sons, I'm nothing but a servant-jailer. Is it any wonder I feel schizophrenic? 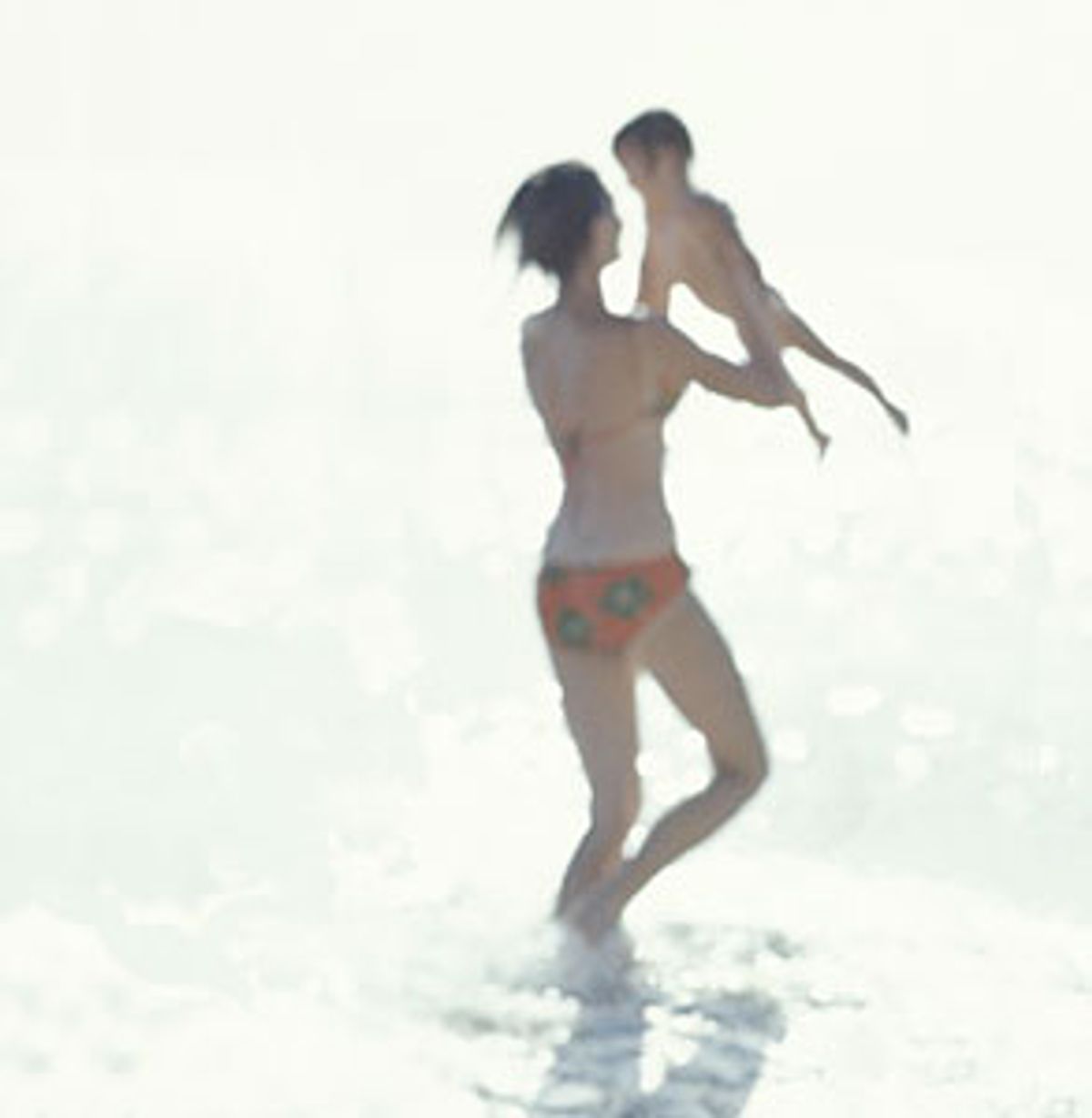 Everybody knows what a monstrous emotional burden it is to have a mother. Whether the mommy in question is angelic, asphyxiating, absent, or just annoying, it is the task of the child to endure her, escape her, and then explain her, to unload her like containerized cargo, perhaps in therapy. In our child-centric culture, we see the relationship from one direction, as if the child were the living thing, and the mother something tremendously powerful yet insensate, like the ocean, or the weather.

But this high-pressure system I'm in right now is hardly barometric. As the mother of two teenagers from my first marriage (I was widowed in my mid-30s) and a toddler from my current one, I am experiencing simultaneously two phases that really should be separated by a decent interval -- the wild tumble of falling in love with a baby and the bewildering pain of living with adolescents. As I respond to my daughter's dependence on me with a passion that is no less fearsome for being evolutionarily ordained, I'm also coping with my sons' break for the fence. Check out this bad love affair from my point of view, and you tell me who's being scarred for life.

To my barely 3-year-old Jane, I am the world, I am God, and I am love incarnate. She can barely stand to let me out of her sight. She cries my name as soon as she wakes up and anytime we are separated. She lights up like Las Vegas at my reappearance, often leaping into the air with joy. There is almost nothing I cannot fix with my embrace, very little she prefers to my attention -- sorry, Dora the Explorer, but it wasn't even close -- and she showers me with positive reinforcement at regular intervals. "You're such a good helper, Mommy," she tells me when I hand her the toilet paper. "That's beautiful," she says, when I put on a pink shirt. "I lub you," she reminds me every hour or so, in case I have forgotten, sometimes racing into the room and shouting it as she flies past me, sturdy legs churning, dark blond tresses flying, as urgent in her errand as a medieval messenger.

I am not the only person to bask in the light of this little love-machine. She adores her father, whom she calls "Honey" with imperial confidence. She responds to her older brothers and sister (my husband has two kids from a previous marriage who live with us on weekends) with pure delight. But I am Mommy, and I am No. 1. What do you expect? The germ of her had been stored inside me since my own birth; for 18 months she took her food from my body. To say I am her favorite means little in such a rigged competition, I know, but I am.

This isn't the first time this has happened to me. I remember the infancy of my son Hayes, now 15, as one long, golden afternoon, a swoon of nursing and cuddling and staring into his big dark eyes, the ceiling fan spinning overhead and the Dream Academy playing in the background. I had lost a baby, a full-term stillbirth, less than a year before he was born. Hayes washed over me like morphine for a person mangled, lying in the woods, waiting for medical assistance for quite a while. Then a couple of years later Vince came, so charismatic and radiant we called him the baby messiah.

But Jane is the last, and I know she's the last, and I thought I would never do this again; I thought I would have sons but never a daughter. Even as struggle and irritation find their way into my responses, even as she learns to say No and Get my shoes! to whine and hound, Mommy this Mommy that Mommy Mommy MOMMY! -- I am stunned to realize how connected, how consumed, how converted to a tool for her use I have become. (Again!) If anything were to happen to her, I think once or twice a day, and stop myself right there.

And something is going to happen to her even if none of my worst fears comes to pass and she grows normally to adolescence. At that point, I can expect to have precisely the inverse experience of the festival of love I am enjoying now. Torn from my pedestal like a statue of Saddam Hussein, I will be rejected as powerfully as I was once embraced. For just as a toddler is devoted to cathecting you, so a 12-year-old uses all the force of his being to tear free.

With emotionally muffled Hayes, it was a quiet junta, a revolution of rocky sullenness. He responded to less than a quarter of the conversation I directed to him, and to that fraction with icy rebuff or curled-lip scorn. The idea, it seemed, was that I would wait on him hand and foot while staying entirely out of his way, requiring nothing of him, and completely avoiding all public and private displays of affection. The summer he was 12, I remember, my mother asked him why he was being so mean to me. He replied simply, "Because I hate her."

With the more passionate Vince, things have been livelier. At age 11 when it began, he once seemed about to literally explode with rage because I asked him to put the ketchup on the table (a few dozen times), then accidentally bumped into him in front of the fridge while he was finally complying. This past year, seventh grade -- watch out, my friends, for seventh grade -- it got much worse. He cursed at me, he screamed at me, he ordered me to shut up and leave him alone; I was without question the worst thing that happened to him on any given day.

In the preposterously rainy spring of this benighted year, it came to pass that Vince was not doing his homework, his grades were dropping, and thus a scheme was inaugurated where the guidance counselor and I were both to sign off on an assignment sheet he completed every day. One afternoon, I had asked him several times to see the sheet, and instead of answering me he left the kitchen and went to his room. A bit later I was up there knocking and asking him to show it to me -- little Jane was right beside to me, I was on my way to take her to the bathroom, I think -- and finally he responded: Go away! Just go away! Stubbornly, I did not. So he came out on the landing and stuck his face in my face and put his hand on my chest and shoved me, and he said, "Fuck you, you dirty bitch."

My response to this was more profound and less coherent than anger. I was struggling to breathe. For three days, I would find tears welling up in my eyes on and off every time I thought of it. I could barely speak to him. Yet the infraction seemed virtually past punishment. When, the previous summer, he and friend had semi-accidentally set fire to a neighbor's hayfield, I grounded him for a month. But what to do about this? Take away his screen name? Talk to him, I told his stepfather, and I believe he tried. I believe there was an apology of some sort, a conversation. But it could not turn back the clock. My baby messiah had turned into a demon-child, and he was determined to drive me off.

He has to, right? He has to separate, to break the bonds of my milky mothering, my cloying care. I did it too, so I know. I remember how it was, I remember how I treated my mother -- though I stopped somewhere short of "Fuck you, you dirty bitch." Adolescence is poison, it is torture, it is unbelievable frustration. I didn't just hate her, I hated everything, which was her, and to escape her I wanted to molt my life like snakeskin and wriggle free to some unimaginable other world.

Even if I know this separation is necessary, it breaks my heart. And even if my heart is broken, I can't just skulk off and lick my wounds, because the little infidels still need me to love them, still want that tiny dot in the distance that used to be the whole world to receive them warmly on their occasional visits. All I can do is find some cooler place to stand, some way to let go but not leave -- so I can continue the task of caring about people who are conducting a vigorous multi-year exorcism of me.

But for God's sake, do I have to go through both of these things at the same time, the toddler and the adolescents? It is truly insane. It forces me to remember that this boy who cannot tolerate my standing next to him once sucked me in as if I were oxygen. It makes me envision the day my darling lover girl will see me as the toxic cloud that blocks the sun. I know I'm supposed to accept this as perfectly normal, part of the job and the process, that it too will pass. But imagine the indignity: The people you once took baths with, whose very tushies you tenderly cared for, will not even answer you when you speak. And nature -- that dirty bitch -- doesn't make you fall out of love with them the way it does them with you. They see your embrace as a chokehold; to you, it is still an embrace. They see your curiosity as a vile invasion; for you, it is still a natural act of care. And so I teach Jane to cut her food, to ride a bike, to say her phone number and address, knowing full well what I am pushing her toward.

Of course every day is not the same. Just last week I spent over an hour chatting amiably with Vince as we bodysurfed together at the beach. Not long from now, they will leave adolescence behind and become fresh-minted grown-ups, and I will fall in love all over again with these friendly, busy people who carry my whole beating heart in that back jeans pocket sagging below their asses. Then they will move on into their lives and patronize me, remind themselves to call me, brush aside my queries about their classes, their careers, their marriages. They will dread my death, but they will also dread the sound of my voice on the phone, like an old flame who won't go away.

And like a billion mothers before me, I will make my peace with it. I will play cards, read novels, and make the favorite pie when asked. I will take my crumbs and hide my scars. I will smile a serene and knowing smile when they hand me my grandchildren.