Bravo's "Queer Eye for the Straight Guy" offers a whole new flavor of wicked fun for the makeover genre -- and brings the shame of being hetero out of the closet once and for all. 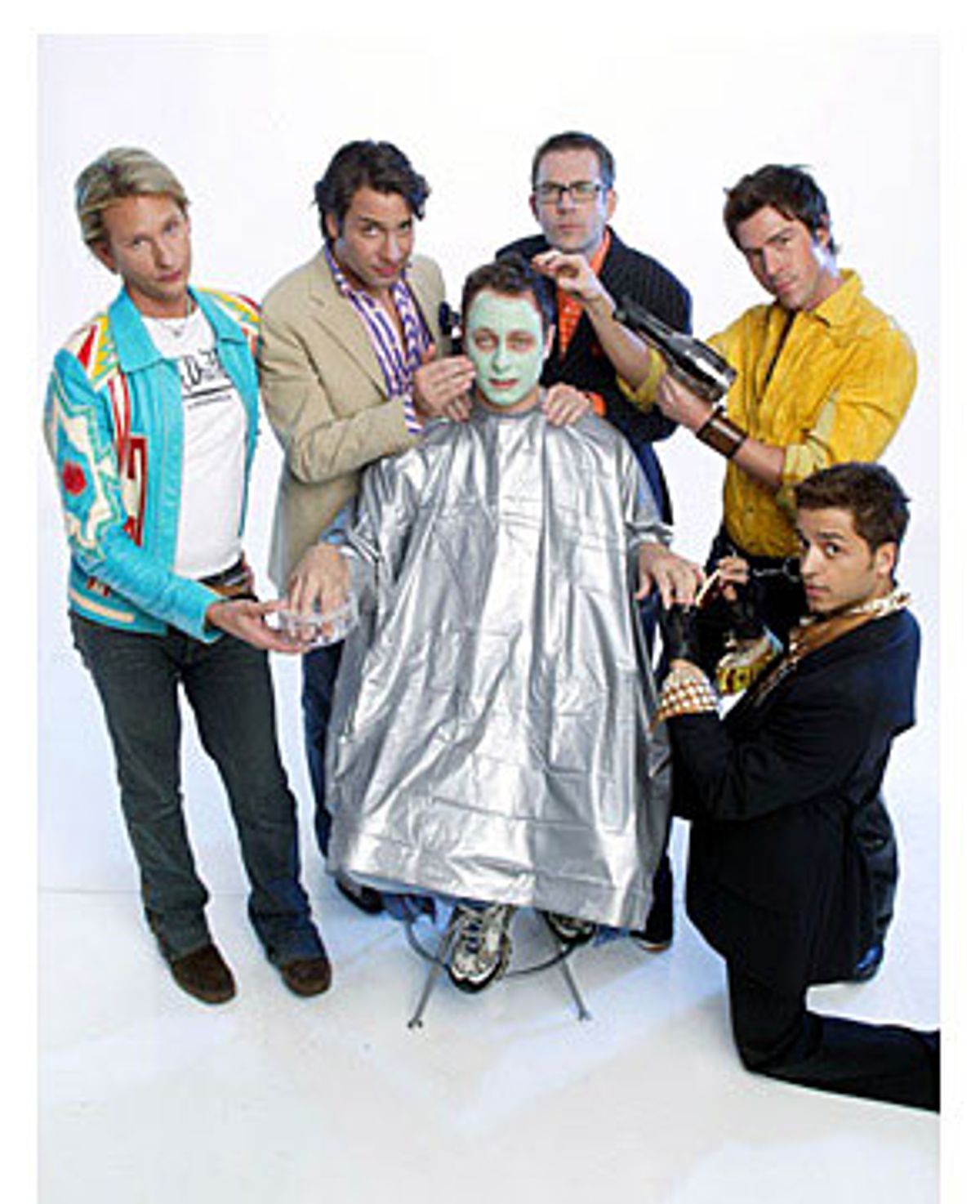 "It's so ugly! Everything is so ugly!"

"Do you buy all your clothing at the Home Depot?"

Either Butch Schepel is hallucinating, or there are five gay men in his apartment, insulting everything from his crumpled mattress to his dirty jock strap.

Even a hole in the wall doesn't go unnoticed. "It's a glory hole!" one of the men cries, delighted. Then, soberly, he turns to Butch, determined to educate him. "Do you know what that's for?"

Like an upbeat, West Hollywood version of "What Not to Wear" that's both wildly entertaining and unexpectedly earnest, "Queer Eye" seems destined to incite even more awe and envy than happily married gay cover boys Chip and Reichen on "The Amazing Race." But, exciting as it is to imagine unleashing the wicked wit and whimsy of gay culture onto Middle America, will the less informed imagine that all gay men are exactly like Jack on "Will & Grace"? Is the snarky gay man the wisecracking little black boy of the 2000s?

"Queer Eye" certainly offers banter that's a little more inspired than Gary Coleman's "Whatchoo talkin' 'bout, Willis?" Indeed, a steady stream of quips flows from the mouths of our experts as they assess the severity of the straight male crisis at hand, discarding empty shampoo bottles and irrevocably soiled boxers along the way. Within minutes, they have Butch's jock strap boiling in a pot on the stove. "Would you like some soy sauce with that?" Butch asks, getting into the spirit of things. "There was already soy sauce in it," fashion expert Carson Kressley responds, and then pauses to think. "Was it soy sauce or boy sauce? I can't remember."

The chaos and disarray of Butch's apartment has propelled interior designer Thom Filicia to the verge of an existential crisis. "There's nothing," he mumbles, shaking his head. "There's no thought in anything!"

But Carson seems to savor ripping Butch's fashion sense to shreds. As he removes sloppily folded clothes from the closet with a pair of tongs, he cracks, "Remember the Gap in '85? If you don't, here's a visual. Gap in '86. Gap in '87. Oh, and '88, what a year! What a year for 'oatmeal.'"

The next segment opens with testimonials from Butch's friends and family. "Butch's sense of style is very limited," says one friend. "His type of a work outfit is interchangeable with a farmer," says another. "That's actually kind of Butch's 'Let's go out' attire as well."

In another episode of the show, straight guy Adam Zalta's family is even less reserved. "Adam is hairy," says his wife. "He's got one eyebrow," says a friend. "It would be very nice if there were two."

In fact, the show seems designed not for straight men but for the exasperated women who love them -- and hate their acid-washed jeans. There's something undeniably gratifying about seeing these men -- who, so far, seem to be selected for their swarthy, hobbit-style looks -- getting shaved, buffed, waxed and, best of all, derided within an inch of their lives. No matter how loudly a wife or girlfriend bemoans the unshaven neck or the shirt with the pit stains, it doesn't have quite the impact of a gaggle of men who are this fervent about the rules of maintaining a lifestyle that is both sanitary and aesthetically pleasing.

At times, though, the Fab Five's conviction borders on the religious.

"That's a monobrow. It's never a good answer unless you're Frida Kahlo or Groucho Marx," says grooming expert Kyan Douglas.

"You never want to match your denims," proclaims Carson. "It looks like some crazy coordinated armor."

The solemn edicts just keep coming. Work that hair product in from the back. Keep those cookbooks in the kitchen. And who knew that, if you're using self-tanning products, you should exfoliate first, or that, if you're wearing an old-fashioned wingtip with a vintage flair, sockless is "the only way to go"?

Helpful as such tips might be, inevitably some straights will feel that "Queer Eye" is more an attack on the habits of the heterosexual than it is an embrace of gay culture. By unabashedly trumpeting the superior fabulousness, meticulous organization and impeccable grooming of gay men, is the implication that straight men are pathetic slobs by comparison? Should straight men feel shame at having eaten bean dip out of the can all these years?

Of course they should. After years of being ribbed for letting an extra day or two pass between bikini waxes, straight women in particular will enjoy watching as the curses of personal hygiene paranoia are hurled at an unsuspecting straight male population.

But are men today too focused on their looks, too primped and polished? Would we really feel comfortable knowing that our boyfriend self-tans, gets his back waxed, and has his hair professionally highlighted? And if these gay men show him how to shine his shoes, tie his ties, and style his hair, what fun is left for us, the women behind -- or in front of -- the man? Will we feel comfortable climbing into bed with a manicured, moisturized pretty boy every night?

Apparently so, if the results of the makeovers on the "Queer Eye" are any indication. In the final segment, the straight victim emerges as a cleaner, prettier version of his old self, interacting with friends and family while the Fab Five share cocktails and watch the whole thing on a big-screen TV. Butch looks vastly better after he says goodbye to his ponytail, beard and overalls. And he seems to feel better, too, walking confidently through the crowd at the art opening his "Queer Eye" consultants have arranged for him. His friends seem impressed to the point of awe, and a few of the women can't stop looking at him.

"Oh, we've got a gasper!" coos Carson, an apple martini perched in his hand. "She is so into him!"

"That guy is hot." Carson agrees. "I think he just touched his ass."

At the close of the next episode, Adam shows off his redecorated house, organized closets and fancy appetizers to his guests. The missing tiles in his front hall have been replaced, his children's toys have been relocated to the closet, the unibrow has been vanquished, and he really does seem like a new man as he breaks out a pair of pearl earrings for his wife -- you know, the ones that culture expert Blair Boone picked out for her? You can almost feel Adam's pride, after years of being chided for slacking off, in getting every detail just right. Sure, these are the details that women and gay men generally care a little bit more about, and it's not hard to imagine this guy failing to tie his tie or shave his face quite as effectively the next day. But with that proud grin Adam is sporting, it's tough not to feel that he's actually thrilled to have had some help.

The final scenes of "Queer Eye" are so absurdly funny and oddly touching, and its stars are so consistently boisterous and funny, I began to develop delusional thoughts about the show's far-reaching impact. The charms of the gay male will be spread far and wide, thanks to one show! Just imagine all of those regular folks across the country who just love "Will & Grace" without understanding that many, many gay men are just as witty and charming and acerbic as Jack and Will are! "Queer Eye for the Straight Guy" will unveil the originality and flair of gay culture for bland heterosexuals across the globe!

Sharing my vision of a gay culture explosion, all thanks to one show, elicited a less enthusiastic response from a gay friend. "It depresses me when they play up the 'Jack factor' like that," he said. "It's so one-dimensional. All gay men aren't like that."

And he's right. Obviously, the stereotype of trendsetting, fabulous pretty boys hardly sums up the entire gay male population. The fact that "Diff'rent Strokes" suddenly made middle-aged white people across the country walk around exclaiming how adorable and clever black children were certainly didn't win them many fans. How enlightened and special can you feel when you're merely embracing a stereotype, falsely assuming that it's an accurate representative of such a large segment of the population?

But then, not all straight women are exactly "Stripperella" either. Whether it's enlightening or just a lot of fun, "Queer Eye for the Straight Guy" is destined to have you cackling with evil glee one minute and vowing to exfoliate the next.