Say it ain't so, Willie

Gentle, gray-bearded Willie Nelson comes out as a post-9/11 vigilante with his and Toby Keith's creepy new hit "Beer for My Horses." 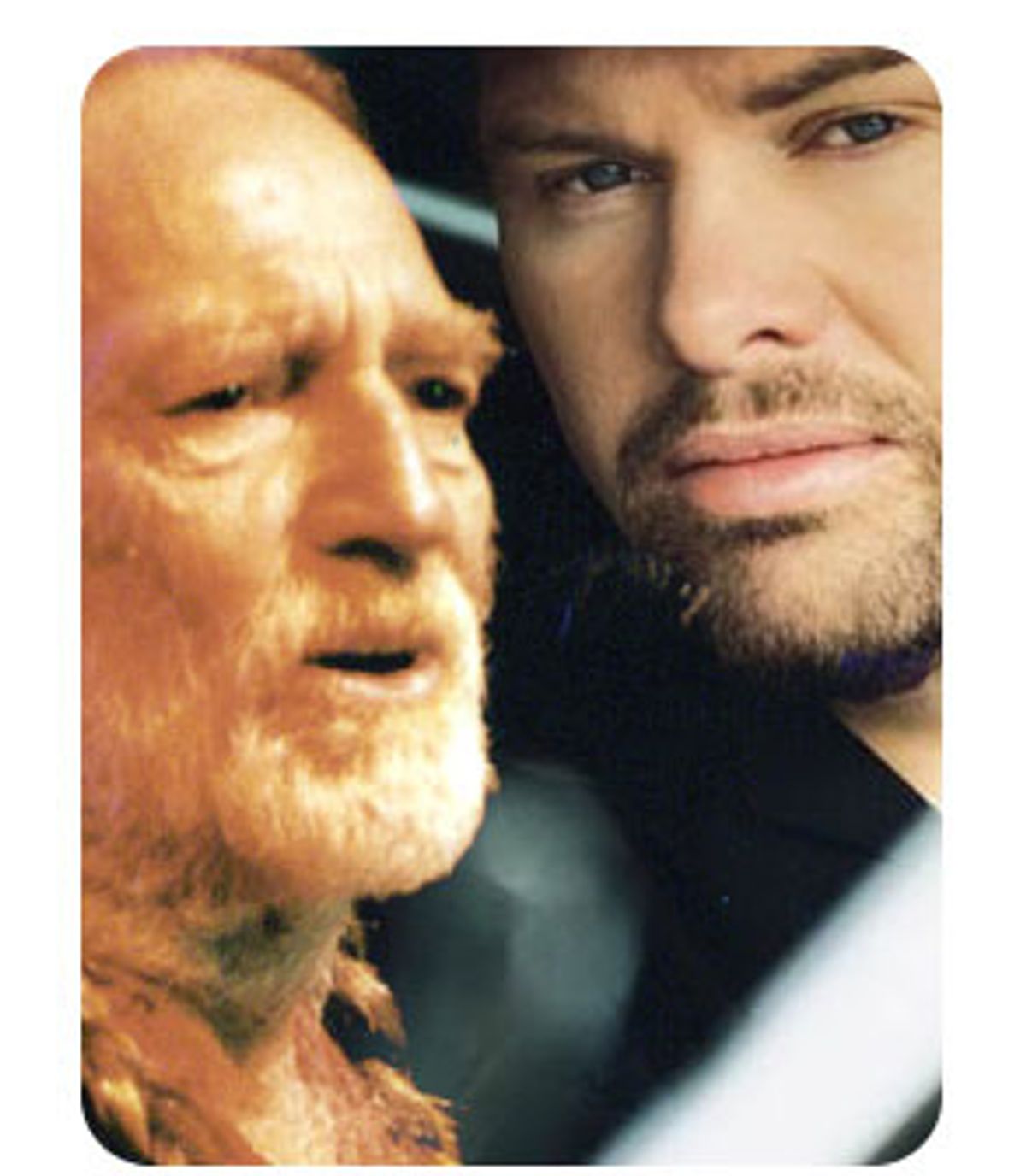 I heard it again in the car the other day as I drove along state roads from north Florida into southern and then western Alabama -- "Beer for My Horses," the No. 1 country music single for the fourth straight week. Station browsing, I paused to listen and sing along each time my tuner found the song, which it did quite often on this Sunday, countdown day. You couldn't pass a backhoe without some radio personality introducing the chart-topper.

I first heard "Beer for My Horses" a few weeks back during another bout of channel surfing. Holed up in a Hampton Inn, I stumbled across a tribute to Willie Nelson in which various contemporary country artists sang duets with the grand old man. Toby Keith of American-boot-in-the-ass fame strode onto the stage, and as the two performed the song I thought, "Is this an old Willie tune unknown to me? It's catchy; I like it." (I also imagined PETA having a field day with the prospect of inebriated farm animals.) Two of the best male voices in country music today, Keith's rich baritone and Willie's contrarian twang, made an unlikely but oddly charming pair.

And then I listened to the lyrics.

You'd be hard-pressed to find someone less inclined to agree with Toby Keith generally, or with the sentiments expressed in "Beer for My Horses," than I. The song appears on Keith's new album "Unleashed." (When, I ask, was he ever leashed?) It's a paean to vigilante justice, a cry for the good ol' days when a man had to pay for the "wicked thing he done," usually by swinging from a "tall oak tree." The song opens with Keith reciting all the wicked things that happen right in our own communities, the crimes that strike uncomfortably close to home and deface the social landscape of Anytown USA:

And, for menacing emphasis:

They didn't get too far.

In the next stanza, Willie contributes a nostalgic voice from the past, his "grandpappy's" description of life in Texas, rife, to any student of American history, with specters of lynching. When folks ran afoul of the law, the regulators would "Round up all of them bad boys/ Hang 'em high in the street for all the people to see." Then Keith rejoins with a racially loaded admonition to "gangsters" and a God-wouldn't-that-be-great prescription for today's society in which the government has replaced vigilantes:

It's time the long arm of the law put a few more in the ground.
Send 'em all to their maker and He'll settle 'em down.

You can bet He'll set 'em down.

The text speaks directly to people's fears, hatred and sense of righteous indignation; the subtext, of course, is pure post-9/11. Somebody blew up a building -- gee, to what could that refer? When Willie and Toby sing the refrain's first line in glorious unison, "We'll raise up our glasses against evil forces," it's as if they're directly channeling George W. Bush's mindless mantras about smoking evildoers out of their caves. In message, the song amounts to masculinist, parochial-cum-nationalist, evangelical eye-for-an-eye, pro-death penalty drivel devoid of social context, lacking any awareness of the systems and structures that induce people to commit crimes on a local level or that make the world look as it does today. It's nauseating.

And then I saw the video.

Those sneaky suckers opted for a modern-day Jack the Ripper tale in which a sicko who preys on prostitutes finally gets his due. Perhaps they meant to send a gendered message by choosing the oldest profession -- women should behave sexually or face a violent and untimely death -- but I couldn't really discern one. If anything, the video expresses disgust for the senseless misogyny of the perp and displays a cheeky ease with gender-bending. One of the characters dresses in drag as part of the ploy to catch the killer, then strokes his blond mane of a wig before coming to his macho-man senses.

Still, catchy tune and pseudo-feminist video aside, the song offends my lefty sensibilities on virtually every level. But what do you do when you like something -- be it a painting, song, film or fashion -- but reject all that the thing signifies? Can music or art or dress speak to a person or be appreciated in a contentless manner?

Usually I want to throttle Toby Keith, but toward the song's end when he sings "hosses" for horses I smile a little, reminded of the guys I went to high school with who spoke of their car engines in such terms. Sure, "Beer for My Horses" is imminently sing-alongable, but so was "Carry Me Back to Old Virginny," and Keith's "Courtesy of the Red, White and Blue (The Angry American)" certainly didn't hurt the case for invading Iraq. Can you embrace something without endorsing its intended meaning? Culture is politics and vice versa, but what does that mean on a case-by-case basis?

Until I divine the specific relationship between the two I must be content to A) enjoy the song as guilty pleasure when it crosses my path; B) refuse to financially support the enterprise by purchasing the CD or patronizing advertisers on stations that play the song; and C) appropriate it.

That last, I think, is crucial if one hopes to drain powerful cultural forms of their totalizing political punch. It's an age-old American strategy, dating from the days when Continental soldiers lifted "Yankee Doodle" from the mouths of mocking British troops, stealing some of their cultural, and perhaps military, thunder. Appropriation was also at work when slaves made the heaven in Methodist hymns into a specific vision of freedom from bondage. Republicans attempted a watered-down version of it when they chose Sting's "Brand New Day" as the theme song for their 2000 convention. They even got to play it once or twice before he pulled the plug. So I'm claiming the chorus of "Beer for My Horses," which is pitched right in my range, for the Howard Dean campaign:

'Cause justice is the one thing you should always find
You gotta saddle up your boys, you gotta draw a hard line.
When the gunsmoke settles we'll sing a victory tune
We'll all meet back at the local saloon.
We'll raise up our glasses against evil forces,
Singing, "Whiskey for my men, beer for my horses!"

The election of 2004 will have to be about drawing a hard line, about taking a stand against deception, warmongering, anti-feminist moralism and personal and corporate greed. Coincidentally, the very week Bush announced that the world could kiss his ass (though I think his actual comment, ostensibly directed to the Iraqi resistance, was "bring 'em on"), my boy Dean issued a "bring it on" declaration himself. Politicians from left to right are talking tough, and why not? Maybe it takes one kind of cowboy to fight another; this way I can have my song and sing it too. For me, the person who speaks truth to power wears the white hat. Here's where Toby Keith and I agree: Justice is the one thing we should always find. And I'm all for a celebratory toddy or two.

Kate Haulman is a historian whose work examines the politics of fashion in early America. She lives in Tuscaloosa, Alabama.