It was billed as a blazing attack on the president's national security policies. But the Democratic contender's New York speech was tougher on Bush's firefighters budget than on his growing Iraq debacle. . 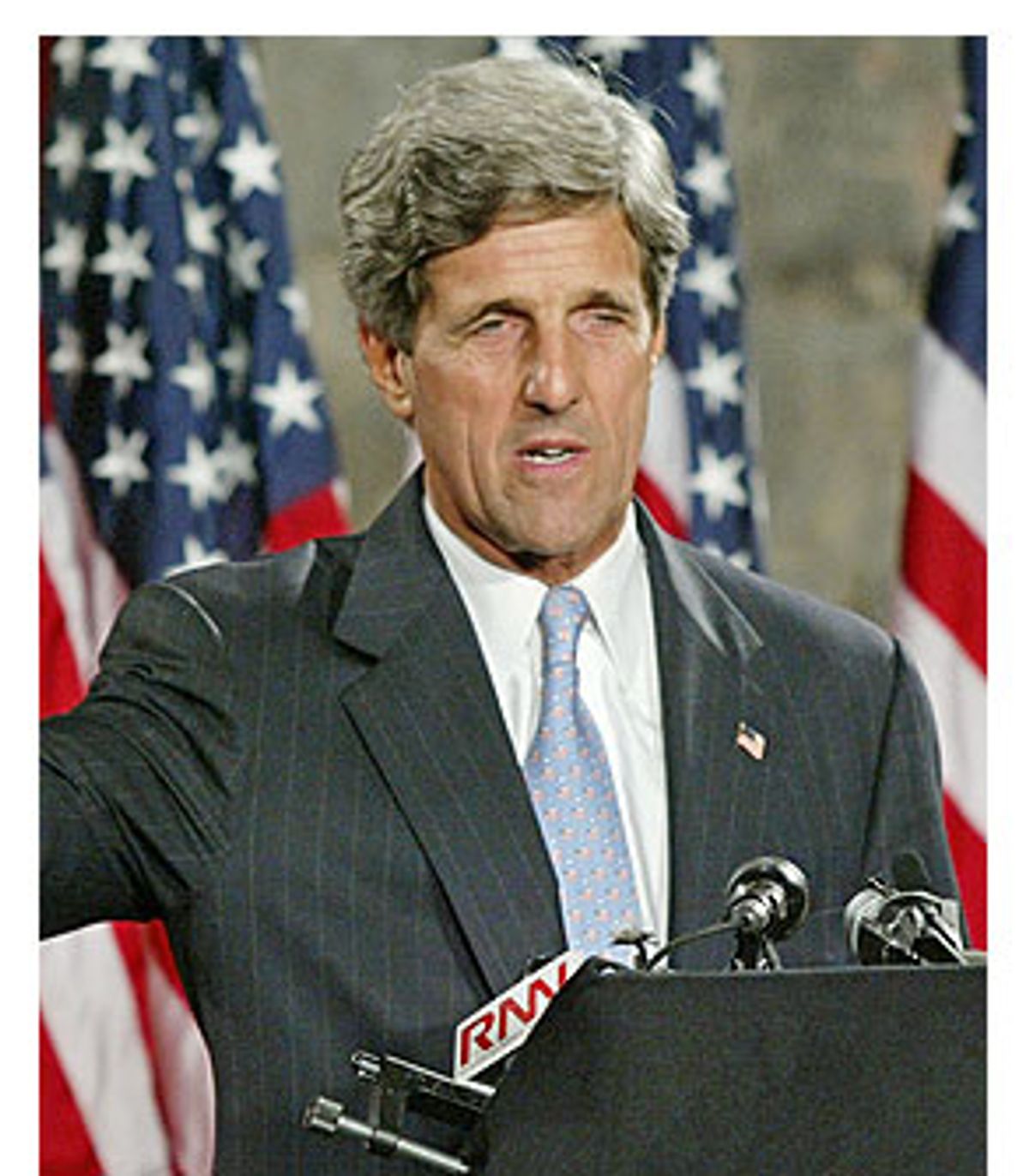 John Kerry strode into a much-hyped national security speech today in the Bronx like a slugger ambling to the plate with two runners on base and the opposing pitcher fading.

Kerry then laid down a bunt.

Kerry's aides and the gods who time political cycles had seemingly set the stage for a powerful and biting critique of the Bush administration's recent intelligence debacles. The Massachusetts senator and presidential hopeful is a decorated war hero and he was coming in to give a speech in the Veterans' Memorial Hall. President Bush, on the other hand, skipped out on Vietnam and is now -- saddled with his highest disapproval ratings ever -- struggling mightily to explain how faulty intelligence on Iraq's nuclear ambitions made its way into his State of the Union address.

"Because of his unique national security credentials, [Kerry] can make a credible case that the others can't," said former New York public advocate Mark Green right before the speech. "He's not just a war hero, he's a warrior."

But then the warrior came out, flanked by 12 flags and some sharp-looking police and fire department brass, and mostly changed the subject.

Kerry came to national attention as a 27-year-old Vietnam vet asking Congress, "How do you ask a man to be the last man to die for a mistake?" Today, as comparisons to Vietnam swirl and seem to be sticking to Bush, Kerry devoted most of his speech to arguing that we need to give more money to the New York police and fire departments. He added almost nothing to the attacks that have given the Democratic candidates sudden momentum against Bush and led normally staid Washington Post columnist David Broder to describe the evening news as "Karl Rove's worst nightmare" in his Tuesday column.

The headline chosen for the speech today, "Kerry challenges Bush to 'tell the truth' about America's security needs," didn't mean that the Massachusetts senator was going to fiercely challenge Bush's nuclear fibs, or ask where the WMD have gone. It rather meant that Bush hasn't fulfilled his promises to give cities enough money to defend against terrorism, a problem Kerry describes as the "preparedness gap," a phrase with plenty of syllables but not a lot of sting. Yes, it's bad that lies appeared in the State of the Union address. It's worse that we're not screening enough shipping containers.

The one time Kerry invoked George Bush's full name for emphasis, it was to say, "One of the first things I'll do as president is reverse George Bush's wrongheaded rule change that is going to take overtime pay out of the pockets of fire and police sergeants and paramedics." Kerry's speech also called for putting 100,000 new police on the streets along with 100,000 firefighters as part of the Father Mychal Judge Fund, named for the New York Fire Department chaplain who died in the World Trade Center.

Much of the audience approved. "We're not into this for politics," said Stephen Carbone, vice president of the Uniformed Fire Officers Association and one of the men seated behind Kerry on the stage. "We're really excited about getting some money to the fire department." He then added that the government had given the police department 3,000 high-quality respirators without his people getting a single one.

Kerry wasn't silent on the debates buzzing all over Washington -- and New Hampshire, Iowa, and everywhere presidential candidates go. He threw in a line about the White House giving "presidential sanction to misleading information," criticized the administration for going to war "without a plan to win the peace," and called for an independent commission to investigate intelligence mistakes. But he stopped well short of his competitors and numerous other administration critics.

Ohio Rep. Dennis Kucinich gave a press conference Monday with a former intelligence officer who has written a letter calling for the resignation of Dick Cheney. Howard Dean, Kerry's main New Hampshire opponent right now, resurrected a line from Watergate last week to hammer Bush with. "What did the president know and when did he know it?" And he has a whole Web page devoted to "Uranium and Niger: Pattern of Deceit." The Democratic National Committee is also running extremely critical advertisements focusing on Bush's uranium claims.

Kerry didn't say anything remotely new and critical about the president's intelligence imbroglio, and his biggest crowd-pleaser was a bit perplexing. "We should not be opening firehouses in Baghdad while closing them in Brooklyn," he said to much applause.

Does that mean that we shouldn't be in Baghdad to begin with or that we should withdraw? No. Kerry voted for the authorization of war in Iraq and told the Washington Post last week that he was "absolutely convinced [that] vote was the right vote."

Does that then mean that, given that Americans are going to be there, we shouldn't be opening firehouses? It's hard to believe that Kerry wants that. More likely, the line was just a way of appealing to the audience at hand in a colorful way that didn't require Kerry to say anything contradicting his prior statements on Iraq.

Jeff Cohen, spokesman for Kucinich, wouldn't say anything specifically about Kerry. But he did say, "It's hard for candidates who went along with the war resolution to cast stones." In fact, the rap on Kerry is that he has repeatedly refused to say anything bold about Iraq. Last winter, he said that he would be against the war if Bush continued to proceed unilaterally (which he did), and for war if there was "an imminent threat" (which even Kerry said he believed there was). When the laptop of one of Kerry's top aides was stolen in March, jokes circulated that it might reveal the campaign's biggest secret: Kerry's position on the war.

David Wade, a campaign spokesman, answers the criticism by saying that the senator's stance was nuanced and diplomatic, adding, "John Kerry approached this decision as if he were commander in chief, not like he was running to be commander in chief."

In a way though, Kerry can be justified for bunting and giving a speech that seemed more intended to get him elected mayor of New York than president of the United States.

For one, Kerry has standing in the battle over national security, no matter what he does or says. Wade points out that the focus of the speech was to get Kerry into the fray on an issue of truth and national security, exactly the area where Kerry has starred before, starting with the senator's criticism of Vietnam policy and moving through battles over Oliver North, Manuel Noriega's drug trafficking, and prisoners of war. In each of those, the senator played a leading role; the current wrangle over intelligence, says Wade, "is so very Kerry."

But maybe more important, six months from now, few people are going to remember who was toughest on Bush during the yellowcake scandal. They are only going to remember if one of the candidates blunders and says something over the top or that turns out to be dramatically wrong. Moreover, there isn't that much additional damage that any one candidate, even the decorated Kerry, can do to Bush on this issue. With scores of pundits and papers already speaking out, a candidate can only move the debate on the margins.

However, what will matter six months from now is who has support from the unions and other fieldworkers. The police and fire department unions will be good for a lot of photo-ops and a lot of door knocking come primary season. Kerry has already built up an impressive party machine that he's been building since he raised millions that he knew he wouldn't have to spend for a 2000 Senate race against a no-name challenger. He's snagged key staff from Al Gore and Bill Bradley's campaigns, not to mention getting former state party heads to run his New Hampshire and Iowa campaigns. He also has nearly $11 million on hand, more than any of his rivals.

In other words, John Kerry doesn't seem to believe that he needs to hit home runs when it comes to national security.

Nicholas Thompson is a fellow with the New America Foundation. He lives in New York.