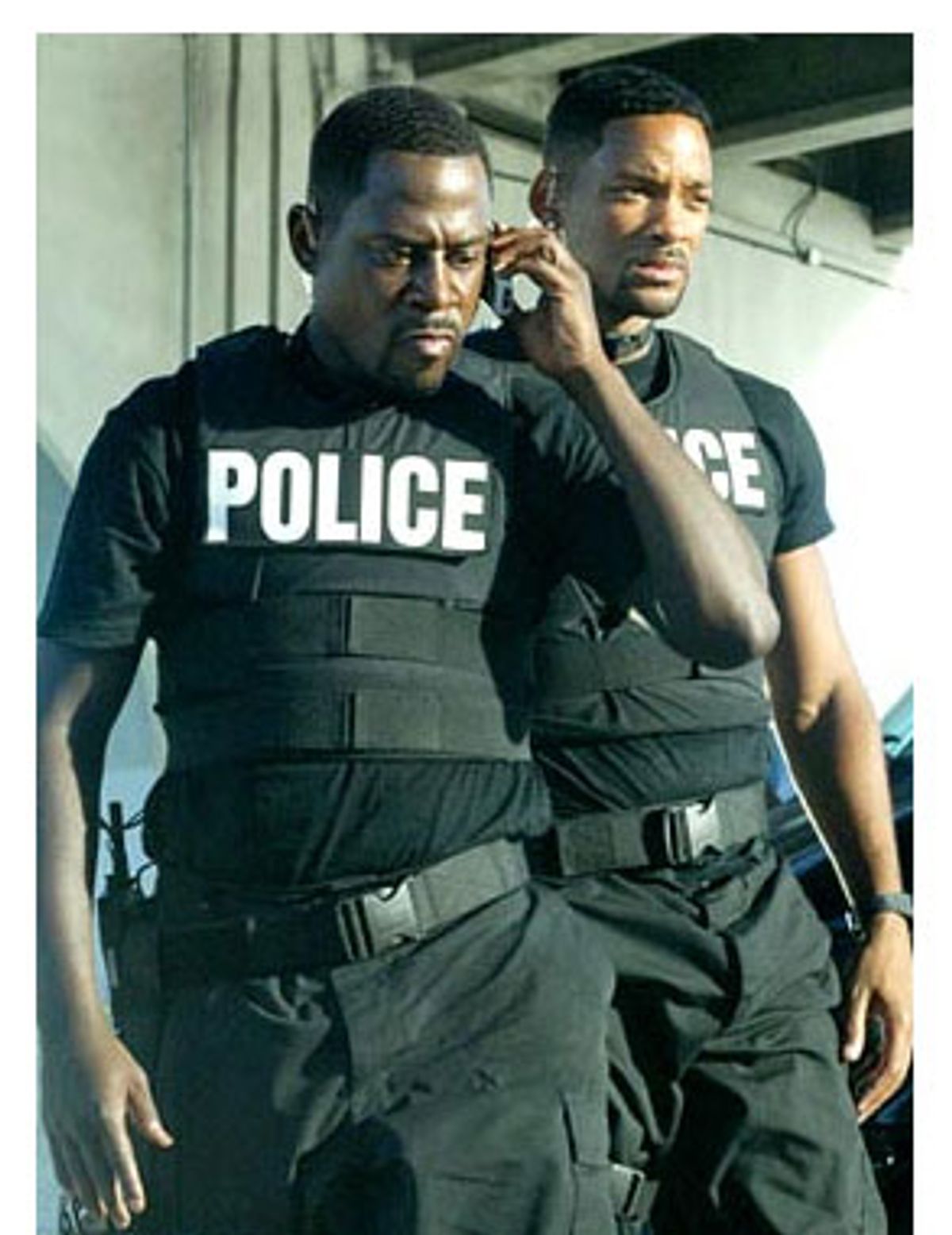 If Michael Bay's movies are characterized by rapid, Cuisinart editing, why is "Bad Boys II" 146 minutes long? Though three editors are credited -- Mark Goldblatt, Thomas A. Muldoon and Roger Barton -- the film has no more been edited (i.e., assembled in a coherent fashion) than it has been written (by Ron Shelton and Jerry Stahl) or directed.

What it has been, though, is packaged. "Bad Boys II" is another Jerry Bruckheimer-Michael Bay demonstration of spectacle -- noise, stunts, the aforementioned incoherent editing -- taking precedence over story and character. Along the way there are ads for Skyy vodka and Miller Genuine Draft and Pepsi (in a Columbia movie?), along with shootings and beatings and dismemberments, presumably to break up the monotony of the crashes and explosions. "Bad Boys II" (the sequel to Bay's equally regrettable 1995 original) is by far the most brutal American picture released this summer.

It's not enough for a bad guy holding onto the side of a speeding Jeep to fly over the edge of a parking garage; his body has to crash into a glass booth below. It's not enough for a villain to go down in a hail of bullets. He has to land in a minefield so we can see the blown-apart bits of his carcass fly up in the air. And when a mortuary van is engaged in a high-speed chase, not only do the back doors fly open so bodies go sprawling all over the highway, we get to see the speeding cars running over them and, in one case, severing a head.

Michael Bay's career (which includes "Pearl Harbor," "Armageddon" and "The Rock") is some sort of reverse triumph, the whomping emergence of illiterate filmmaking. By that I don't mean that the film is made for illiterates, but that his movies are put together seemingly without any grasp of how to construct a story or even a scene. The editing is so manic that during the chases or gun battles you can never tell where the opposing factions are in relation to each other. Whenever something isn't exploding or crashing, whenever Bay has to show two people talking to each other (oh, those boring old things), he has no idea how to shoot the scene except in close-ups. Bay's success is proof that sheer incompetence need not deter anyone from becoming a commercially successful director. He doesn't have the basic grasp of craft that even hacks were once expected to possess -- and since he's not making movies but demolition derbies, the idea of craft is irrelevant.

Perhaps, though, there is one unexpected movie antecedent for "Bad Boys II." The end of Michelangelo Antonioni's "Zabriskie Point" was the director's fantasy of the destruction of America, except that instead of people dying we saw only consumer goods blowing up -- a shallow piece of Euro non-thought about U.S. In "Bad Boys II," we see a long chase sequence along the Florida freeways with cars flying and crashing into one another, being squeezed into tinfoil along a guardrail, running over each other, bursting into flame. But we see no casualties. That's fitting, because in Bay's movies people do not exist. If they are present at all it's to provide connecting footage between the action set pieces.

The two human props here are Will Smith and Martin Lawrence as a pair of Florida narcs going after a Euro-scum drug dealer. Romance and dramatic complication are meant to be supplied by a wasted Gabrielle Union as Lawrence's sister, a DEA agent working the same case undercover. (Lawrence frets that the job is too dangerous for his little sister; Smith assures him she can handle herself. And of course she winds up needing to be rescued.)

Smith and Lawrence's relationship has been conceived of as a black buddy-movie version of Abbott and Costello, with Smith as the cool straight man and Lawrence the sputtering comic relief (except where Lou Costello played a scaredy-cat, Lawrence plays someone who "has problems with anger"). But Abbott and Costello comedies were straightforward affairs, and in a movie of this consistently inhuman tone and scale, all the stars can do is engage in cutesy-poo buddy-movie banter. Do the people who make buddy movies ever notice that for all the testosterone on display, the two heroes always wind up playing coy with each other in a way that would make drag queens blush? Perhaps someone making the movie realized this, because we get the requisite scene where the pair are mistaken for gay lovers (and a shot of a pair of actual gays to get an ever bigger laugh).

Maybe Bay's movie wouldn't seem so crummy if he abandoned the pretense of giving his movies an A-list sheen and embraced being a cheesy exploitation filmmaker. They'd certainly be more honest. A hack who wanted to get some T&A into his movies wouldn't set up the justifications Bay goes to here for the same thing. There's a scene in a dance club where wet, nubile young things erotically feed each other Ecstasy. (If the movie is to be trusted, Ecstasy turns women into lesbians. In that case, can someone slip some to the Olsen twins?)

A scene in Cuba (yes, our heroes not only get to kill bad guys, but commie bad guys, too) is an excuse to send the camera up the skirt of a street hooker, who has no function in the plot. And in the movie's most repulsive scene, Smith and Lawrence, breaking into a mortuary, get to leer over the breasts of a young woman's corpse. Who is this supposed to turn on? Is Columbia now catering to the necrophiliac market? Or is Bay perhaps intending to demonstrate that rigor mortis has no effect on implants?

"Bad Boys II" opens with shots of Ecstasy rolling off a drug manufacturing line. Couldn't Columbia, with all of Sony's riches at its disposal, have distributed tablets to the press before they showed us the movie? I mean, if you wound up feeling some love for a Michael Bay movie, you'd know you were dealing with some killer dope.