Loose-limbed ostrich Rowan Atkinson has his moments in this undercooked British spy farce, but it's mad king John Malkovich who steals the show. 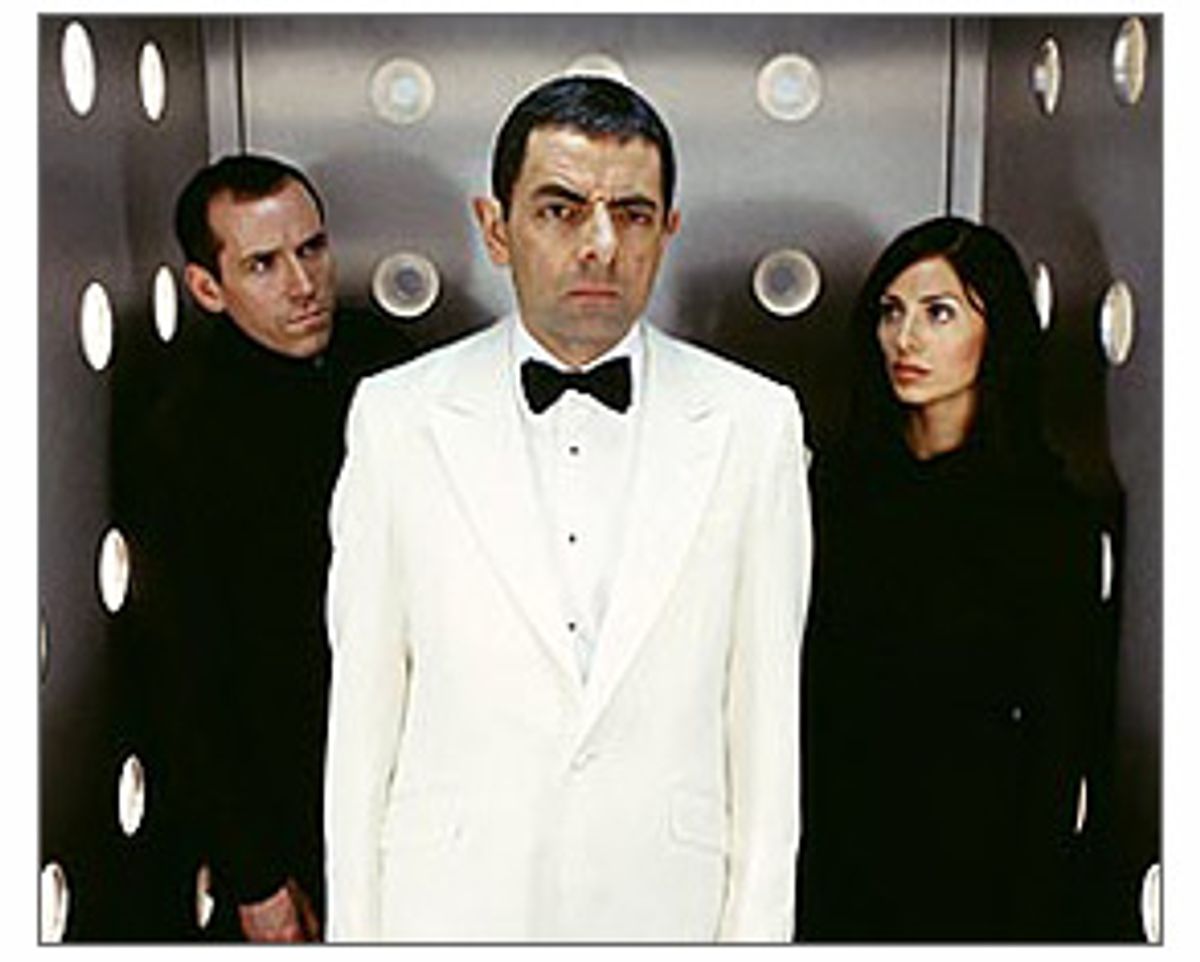 Physical comedy just can't get a break. When an actor is great with a comic quip, we laud him without missing a beat. But a good pratfall? That's just comedy for the masses. Or at least an occasion to launch into a diatribe about what, exactly, the French see in Jerry Lewis.

But like all other types of funny business, physical comedy has to be framed properly -- a director has to move the action along at a perfectly calibrated pace, putting the emphasis on just the right moves. It's frustrating when a movie ostensibly has everything in place to be roaring good fun, and yet somehow, through the fault of no one in particular, stumbles on its way out of the gate.

That's the case with the James Bond spoof "Johnny English," starring the extraordinarily gifted Rowan Atkinson, and it's a bummer. Atkinson plays English, a hapless (and sometimes, seemingly boneless, considering the physical scrapes he gets himself into) British secret agent in training who suddenly finds himself assigned to a hot case. He has to catch Pascal Sauvage (John Malkovich), a rich French prison entrepreneur (that means he owns a network of incarceration facilities worldwide -- I suppose they're run like Dunkin' Donuts franchises) who hopes to steal the British crown jewels, kidnap the archbishop of Canterbury and have himself crowned king of England.

It could happen, you know. For a spoof, the plot of "Johnny English" is beautifully worked out. And the harshest thing you can say about it is that it's mild, silly fun. "Johnny English" isn't badly made (the director is Peter Howitt, who also made the very pleasurable "Sliding Doors"), or even badly written (the script is by Neil Purvis, Robert Wade and William Davies). Many of the jokes seem funnier in retrospect, which suggests that there's something going on there. It's simply a matter of the gags not connecting properly -- somehow they're an eyelash shy of hitting their mark.

So much of "Johnny English" should be funnier than it is: For instance, Atkinson's English spook bumbles arrogantly into a funeral, convinced the mourners are disguised thugs, and has to be dragged off by his faithful and much brainier assistant, Bough (Ben Miller), posing as a doctor from a mental institution. You find yourself wanting to laugh, but by the time you've talked yourself into it, the moment has passed -- you're left feeling as if you've simply missed the boat, but you're still clutching your ticket.

That's a shame, because Atkinson is generally such a pleasure to watch, not just in the "Blackadder" series on British TV, but in the bit roles he's had over the years -- from the fawning Nigel Small-Fawcett in "Never Say Never Again" to the babbling priest in "Four Weddings and a Funeral" (in which he identified the Holy Trinity as the "Father, Son and Holy Spigot"). One of my favorite Atkinson roles is the gynecologist in Ben Elton's droopy "Maybe Baby": I can't help laughing when I think of the intense concentration he applied to squeezing some lubricating goo onto a speculum, or his jazzy nickname for uterus ("yute").

Atkinson does have some bright moments here: His facial expressions, for one thing, speak of a delightful mixture of arrogance and complete dunderheadedness. (Most of us who have held office jobs, or any other kind of job for that matter, have known guys who act the way Johnny English looks.) Even Atkinson's ears are funny -- they're perfectly shaped pitcher handles. And a sequence in which he gets his tie caught in a revolving sushi bar (it drags him along like a tin can tied to the back of a car) gives him a chance to show off some of his ostrich-ballet grace.

But somehow, I found myself laughing more, and harder, at John Malkovich's Pascal Sauvage. Malkovich is usually such a numbingly self-serious actor. But he cuts loose here in a way that's outlandishly brilliant: It's his best performance in years. His Pascal is filled with hatred and contempt for the English, which he expresses freely in a hijacked French accent. "Meestair Eenglish, I am gob-smacked!" he declares at one point, with a look of deliciously crazed intensity. With his hair in a longish supermodel Euro-mane, he looks like a leonine lunatic. I savor the image of him as he seizes one of those silly-looking jeweled crowns (the kind with an ermine brim) and places it on his head, like Louis XIV reinvented as a mad margarine king.

Well on his way to stealing the English throne, Pascal takes the liberty of having his image, complete with ridiculous crown, printed on the nation's currency and postage stamps. We see those notes and stamps zipping off the presses, millions of little Malkoviches whizzing by in a blur of egomania. It's a wonderful touch, and a hint that whatever's wrong with "Johnny English" may not be attributable to lack of care or skill on the part of the filmmakers or the actors. It may be a simple case of the stars in the moviemaking heavens failing to align. Or simply declining to obey the orders of the margarine king.