Photographer Ellen von Unwerth talks about her new S/M fantasy book, "Revenge," in which the wicked baroness finally gets what's coming to her. 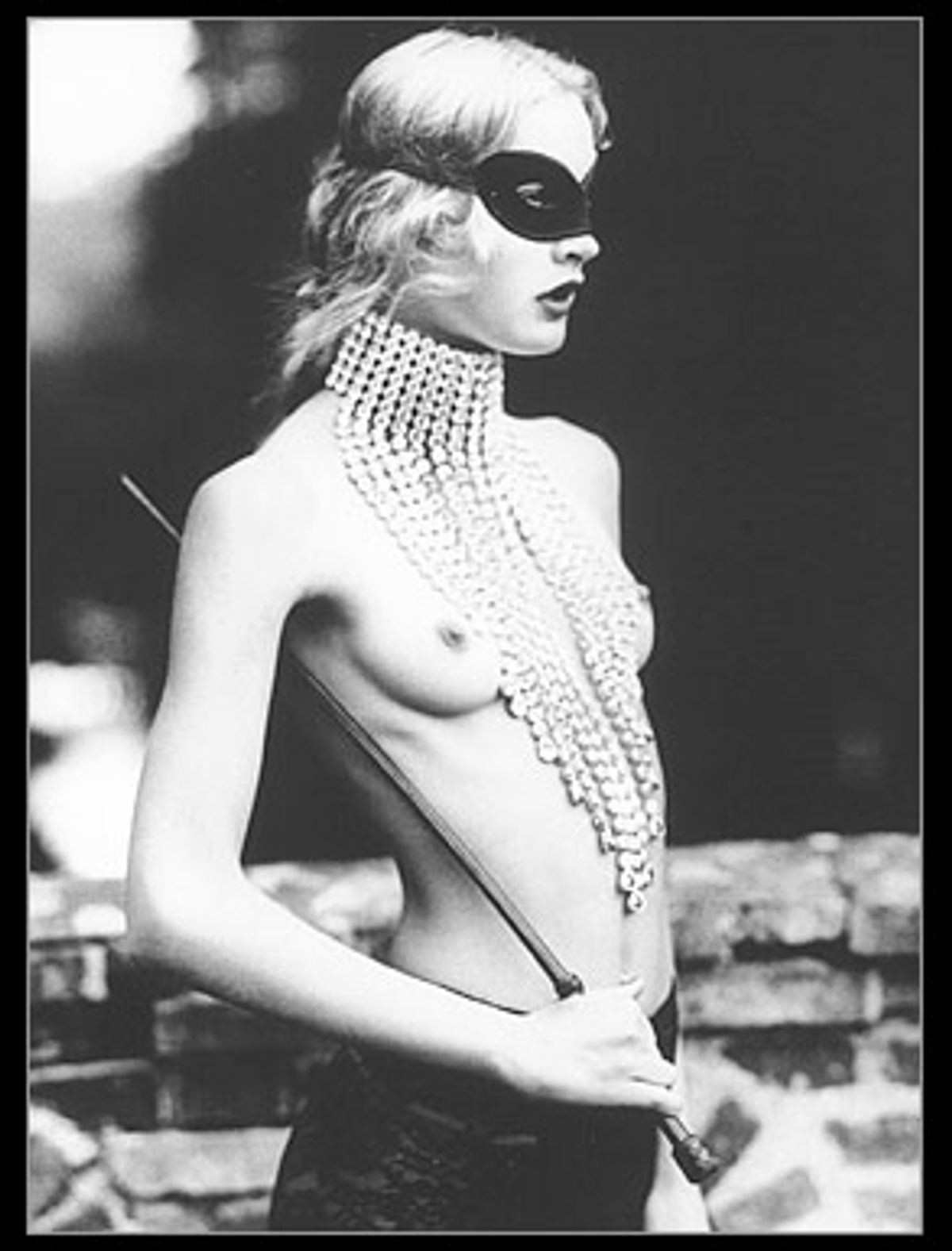 Ellen says it was hot at the chateau. At least the air was hot -- hot enough to make the three rich femmes from the city strip down to their garters. While Ellen watched, the girls French-kissed on the grass. They wallowed in the wet garden mud. Ellen raised her camera and captured the mud caking their breasts, the mud slopping down their butts.

Then she photographed how the maid hosed each girl down.

Don't think I'm taking Ellen's word for any of this. I have seen the pictures. You can too. They're in a book. In the old days, one would have had to slide into some fake "rare" book store, and sneak out with this volume wrapped in brown paper on loan for 50 bucks a week. But these are modern times. You can buy this book at Borders and place it on your coffee table. Your guests will be free to page through it. No one will get arrested. No one will think bad thoughts about you. Not even when they turn to Page 75 -- Eric the chauffeur has "lured the girls into captivity." He ties one to an "old flogging post." Later, the wicked baroness -- of course a "wicked baroness" is involved -- chains one of those coy mademoiselles to a radiator. It would be a shame if the distressed girl soiled her underpants. Later still, the Baroness' maid flogs a rich man's daughter in the pony stable -- the pony himself not particularly curious as the hieroglyphs of pain are raised on the poor girl's rump, welts which will later be referred to in the book's slight text as "fiery Braille."

Ellen von Unwerth's sadomasochistic book (is the "von" real or fake?) could be called "The Story of E." Or "The Story of I," "The Story of M," or "The Story of C, M, I, and S." The names of shapely girls disheveled and degraded are Emily, Isabelle, Marie-Louise, Francoise, Charlotte, Mimi, Ivy and Sarah. The book is titled "Revenge." However, because in the end, Emily, Isabelle, Marie-Louise, Francoise, et al., punish the wicked baroness, the wicked maid, as well as the wicked, wicked chauffeur. That last poor sod is left tied to the chateau's gate with his pants bunched at his knees while the liberated rich girls beat him with riding crops and whips.

If Ellen von Unwerth sounds wicked as well, she is. Her last book was even titled "Ellen von Unwerth's Wicked." As sadistic as these pictures sound when described in words, they are all just sinisterly playful, as if they were taken by a naughty girl, instead of an ex-fashion model who must be sleeping with the devil. Salon talked to her by phone.

Can you tell me your life story quickly?

I was born in Germany. Then I moved to Paris when I was 20 and worked as a model for 10 years. I started to pick up photography. This is my fourth book. I work in fashion. Portraits. Everything.

How did "Revenge" come about?

Where did you shoot?

At a chateau one hour outside of Paris. I booked the girls like a movie cast. Everyone had a character. The guy also. I showed them a script, little drawings. And had them play out little scenes.

Was it fun being so wicked?

It was very much fun, for the girls and for me. [Laughs very long.]

Did the chauffeur really get beaten?

How did you get it published?

How did I get it published? I called Twin Palms because I've already done a book with them. I thought they might be really interested. [The publisher] called me back a couple of days later. He loved it and wanted to do it.

What kind of modeling did you used to do?

Have you ever taken self-portraits?

To be honest, I don't really like it. It's not my thing. I decided to take pictures of other people.

How did you make the transformation?

It was really easy. I was living with a photographer who, he didn't really teach me to take pictures, but I learned unconsciously because I was around him so much. He taught me how to print. He took many pictures of me, but only developed one, and I wanted to see all the others. So I learned how to print. Then a couple of years later, he bought me a camera and showed me how it worked, and then I started to take pictures of my modeling friends and I did reportage. First thing I did was reportage in Africa. I took pictures in a little African village of children. The pictures were published straight away in a very trendy [French] magazine that was called Jill. It was a surprise to everybody, especially to me. I didn't know that I had talent.

Those first picture seem like the antithesis of fashion.

Yeah, yeah, but I kind of photographed fashion in a big reportage style. Lots of movement. I try to snap people more than have them posing.

Do you have a repartee with models because you were once one yourself?

I think so. I know when they feel bad. I always felt bad when people expect something from you and don't give you anything to feel inspired. They just want you to pose. "Look to the left. To the right." I felt like an object. Models have personality. I have them express themselves in front of the camera. I think that is so much more interesting than models who are beautiful and just sit and "don't move." I'd much rather have somebody with personality.

If you're taking a fashion shot of a model wearing a hat, do you direct the shoot like a movie director?

I always try to get them to think of something else. "You see something. You're jealous. You're in love." Mostly it's jealous or in love. It's not very complicated. "Are you a spy?" I like them when they scratch their forehead. I like the spontaneity. I just like to have some emotion coming out in the picture.

Is there any difference during the shooting?

Did you model nude when you were a model?

Was it because you were never asked or you just didn't want to do it?

How does a model let you know that she doesn't want to be nude?

It's not the first question I ask them, but sometimes I do. Sometimes I do casting and I ask them, "Do you do nudes?" And they have to answer straight away. You notice when girls are inhibited. Or when they don't like a décolleté dress. You just feel it.

But everyone had fun on the shoot for "Revenge" ...

Very much. It was a very warm day. It was very easy and joyful [to get naked].

Are there outtakes that are too revealing to be used?

There are some pictures that I didn't use. I had an exhibition in Paris, and I had a slide show of some of the outtakes. There were lots of pictures which I loved because as I say it was a bit like a movie so there were lots of beautiful pictures of spontaneous things. It was very hard to edit them down. I don't know how many days it took.

One hundred and twenty days like "120 Days of Sodom"?

Women being tied up and beaten isn't politically correct. In France do you have political correctness?

Does this reflect your fantasies?

Are these picture homogeneous to your fantasies?

It's something I'm fascinated by, for sure. I love the kind of bondage theme. I was always fascinated by Betty Page and all those naughty pictures of the 1920s, and the beginning of the century. I love those pictures.

What's great about Betty Page is that she always looked so innocent no matter whether she was being spanked or finding herself tied up like origami.

Betty was innocent but she did the shoots with so much self-confidence. There was nothing degrading about it. She looked very strong. The photos were just sort of beautiful.

Have you yourself ever been handcuffed naked to a radiator?

I'm not into that at all. That's why I did the book in black and white. I'm not really into hardcore bondage. It frightens me, too. It's shocking that people really do this kind of thing. But then everyone has their own thing.

What is your next project?

I have some ideas that I'm working on. It's something different than this. Probably still about beautiful sexy women. It's a secret. I don't want to talk about it yet.

This is the most personal question I will ask you: "When were you born?"

I'm not going to answer that.