Congress to bikers: Get a car

A house subcommittee has voted to cut all funding for bike paths and other pollution-free transportation programs. 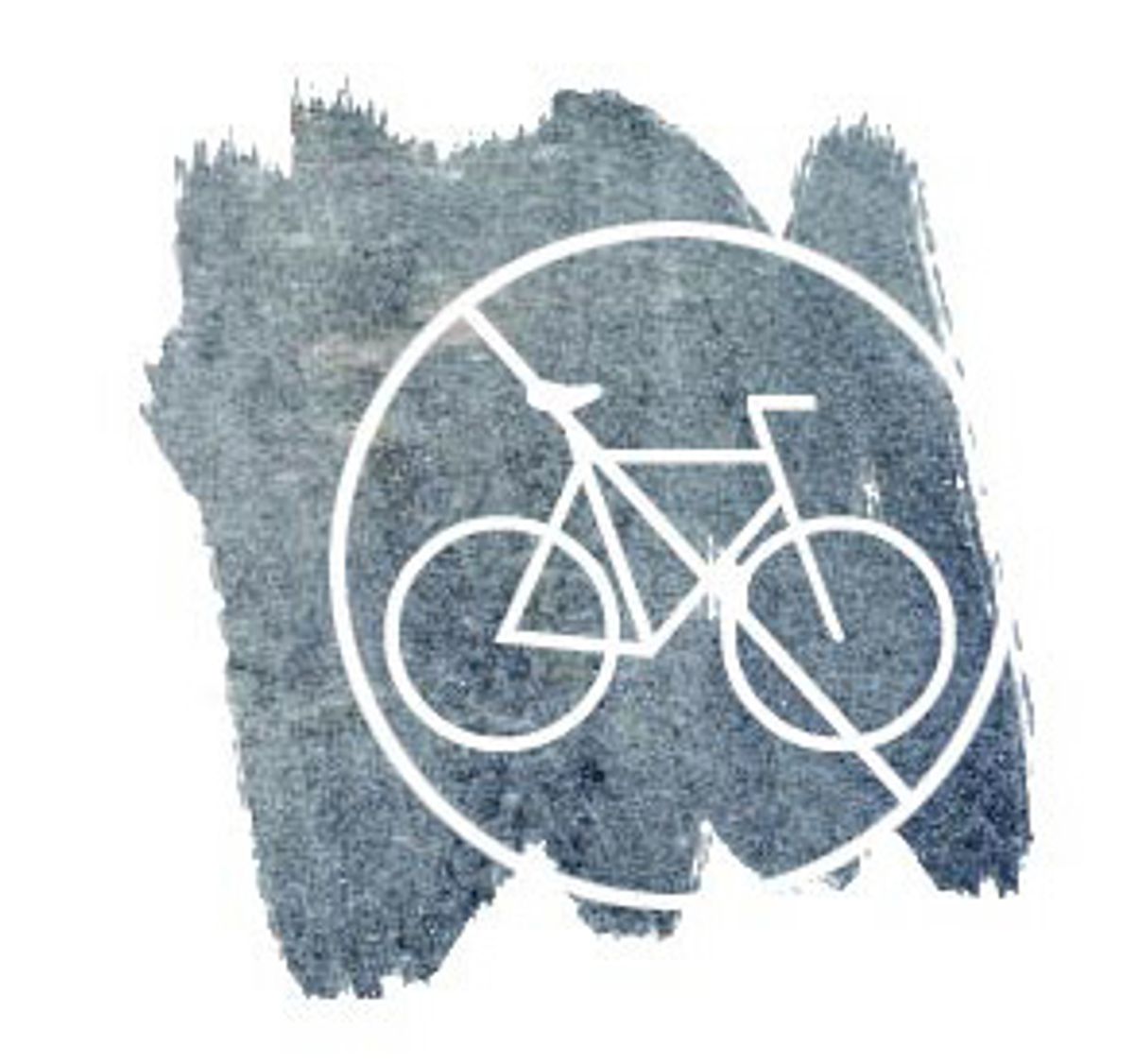 For every bike commuter who proudly pedals to work under the mantra "one less car," Congress has a message for you: Get back on the highway where you belong, burning fossil fuel like a real American. That goes for you, too, you traffic-hazard pedestrians.

Fresh out of subcommittee, a new congressional transportation appropriations bill will entirely eliminate some $600 million worth of annual federal funding for bike paths, walkways and other such transportation niceties in fiscal year 2004.

Never mind the political fallout of U.S. oil dependency on the Middle East, or the fact that the average mileage per gallon for new cars and trucks in the U.S. is at its lowest level in 20 years. Members of the House's Appropriations Subcommittee on Transportation, Treasury and Independent Agencies know that what America needs now is fewer bike paths and walkways -- but more highways.

Defenders of the bill argue that, in light of huge federal deficits, something has to go, but for bike activists and environmentalists who have been pushing for decades for alternatives to driving, the cuts are a giant step backward.

"The irony of trying to make it easier for people to drive when we're clearly running up against major roadblocks on providing oil for driving is just too much," says Leah Shahum, executive director of the San Francisco Bicycle Coalition, a nonprofit that promotes bikes for transportation.

Under the new bill, which the full Committee on Appropriations is likely to consider this week, before it goes to the House floor for a vote, highways would receive $34.1 billion in fiscal year 2004, which is $2.5 billion more than this year, while the Transportation Enhancements program that funds bike paths and walkways would get nothing. The bill would also significantly reduce funding for everything from Amtrak to reverse-commute transportation programs that connect low-income urban workers to jobs in the suburbs.

"It's saying: 'We're not really that interested in community restoration or improvement. We just want the money going toward highway development,'" says Susan Prolman, government relations counsel for Defenders of Wildlife. She points out that the bill puts $4.8 billion more into highway projects than President Bush asked for in his 2004 budget.

"Draconian," "cynical," "nonsensical," "grave" are some of the words that congressional lobbyists for environmental, conservation and historical preservation groups had for the legislation, which will cut funding specifically aimed at supporting pollution-free modes of transportation.

"They essentially gutted funding for sensible alternatives in favor of more road building," says Eric Olson, who works for the Sierra Club's Challenge to Sprawl campaign in Washington.

After 40 years of funding highways, in 1991 the Department of Transportation started the Transportation Enhancements program to develop a more "modally balanced transportation system by encouraging projects that are more than asphalt, concrete and steel." Environmentalists and historical preservationist groups viewed its creation as a watershed in federal transportation policy -- an acknowledgement that the U.S.'s vast federal highway system can do more than just seamlessly move cars and trucks.

"So much of the devastation to the historic fabric of our cities and communities was due to the barreling through of highways in our neighborhoods," says Susan West Montgomery, president of Preservation Action, a group that's among those fighting the cuts. The creation of the enhancements program countered that with "symbolic meaning, as well as practical money."

From 1992 to 2002, the program invested more than $2.4 billion in some 12,000 projects, with about half of that money going directly to benefit cyclists and pedestrians. It has provided funding for bike paths, pedestrian bridges, sidewalks, as well as scenic overlooks on highways and wildlife underpasses under roads. The program has helped pay for rehabilitating historic train stations, removing illegal billboards and mitigating pollution runoffs from highways.

In San Francisco, the birthplace of the global bike activist movement Critical Mass, urban cycling has doubled over the last decade. And like many other local governments, the city has won federal funds to keep up with the increase in bike transportation.

"To lose these federal transportation dollars would be a huge blow to San Francisco's growing bicycle infrastructure," says the San Francisco Bike Coalition's Shahum. "We've seen tremendous change in the last 10 years from striped bike lanes to better signage to bike access to transit and safety promotional campaigns that wouldn't have been possible without the funding." On July 24, San Francisco Mayor Willie Brown will unveil a new educational campaign, underwritten by the currently threatened funds, that aims to encourage cyclists and motorists to "coexist" better.

"What we've got now in San Francisco and many cities across the country is the beginning of a good system," says Shahum. "But we're really kind of on a precipice of making a sea change in the city, because what we're close to building is a complete connected network of bike lanes and passages, a chance to ride in dedicated space."

It's not just the pedaling urbanites in San Francisco who have benefited from the monies under the program. Elementary school students who ride on the Shannon Park-Ladd School Bike Path in Fairbanks, Alaska, and bird-watchers in Texas on the Great Texas Coastal Birding Trail, also enjoy the fruits of the program.

Among the thousands of projects the program has supported are Denver's Bike-and-Ride Project, which retrofitted buses with bike racks and provided bike parking at bus stations. It also contributed $815,000 for the creation of a new pedestrian plaza as part of the revitalization of Journal Square in Jersey City, N.J. (To look up what the program has helped finance in your state, go here and click on the "projects" link.)

Micah Swafford, press secretary for Rep. Ernest J. Istook, R.-Okla., who chairs the subcommittee that wrote the bill, argues that, with the prospect of a $455 billion federal budget deficit and anticipating declining revenues in the highway taxes that fund transportation programs, the committee had to cut something.

"It's more important to provide the basic funding for roads, before you provide money for enhancements whenever you're facing a shortfall," Swafford says, citing Department of Transportation statistics that there are 6,476 structurally deficient bridges on the national highway system as one of the reasons that highways were the subcommittee's priority.

But Rep. Istook put out a press release on Friday, July 11, the day the bill made it out of the subcommittee, bragging that "$518 million is headed to Oklahoma!" leading one environmental lobbyist to attribute the whole issue to "parochial Oklahoma politics."

"Actually, it's kind of sad. He's basically eviscerating these programs that are important to a lot of other states for the sake of benefiting Oklahoma," says Deron Lovaas, a lobbyist for the Natural Resources Defense Council, another group fighting the cuts.

The move by the transportation appropriations subcommittee also represents a turf war between the congressional appropriators and authorizers. The current law governing all U.S. Department of Transportation funding expires Sept. 30. But the congressional authorizers, in charge of setting the agenda that the appropriators then enact, have yet to decide if they will extend the previous authorization for another year, or revamp it entirely for the next six-year term. In the ensuing vacuum, Rep. Istook and crew have just gone ahead and set the transportation agenda for fiscal 2004.

Groups opposed to the measure are lobbying members of the larger Appropriations Committee, as well as other members of Congress. But they think they'll have better luck making the case in the Senate for spending a fraction of highway dollars on bike paths.