The president's 16-word stretcher about African uranium was nothing compared to his lie about the links between Osama and Saddam. 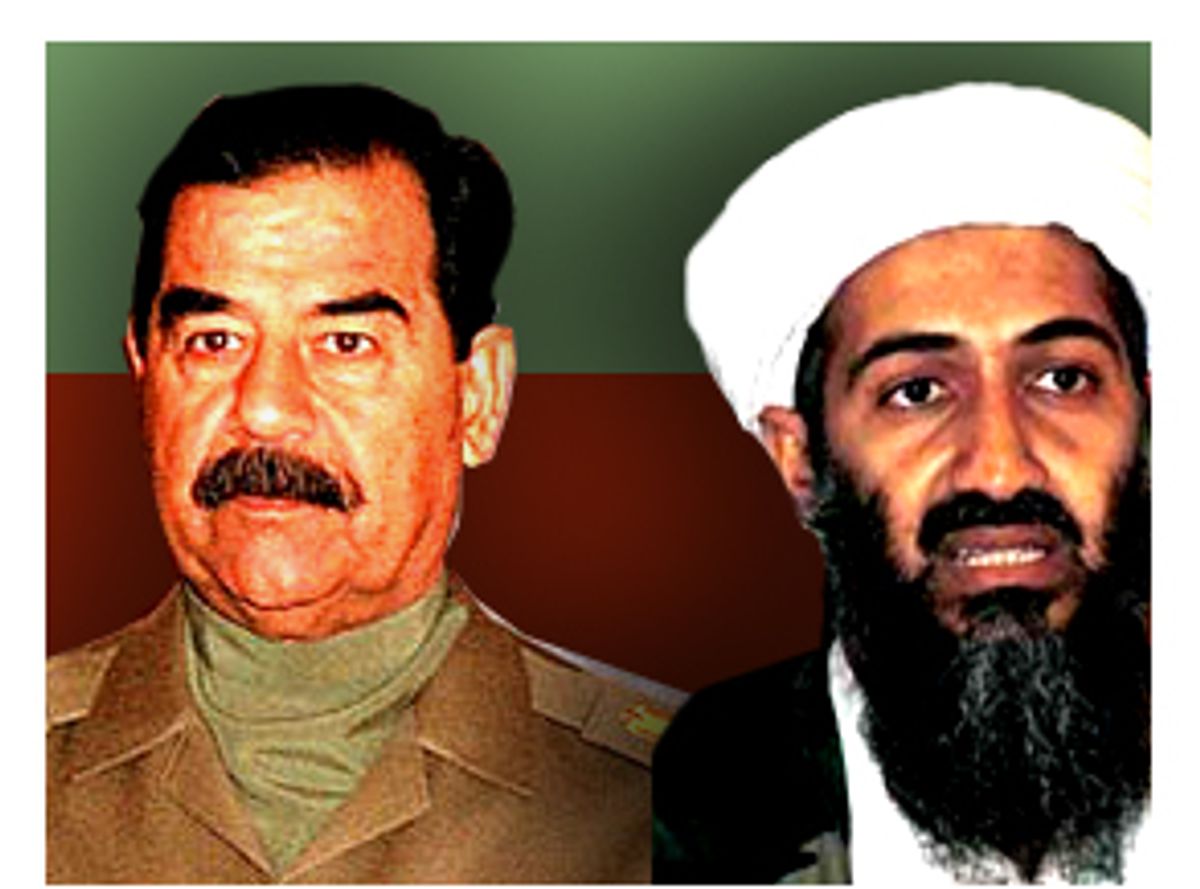 The White House is correct. The fuss over a 16-word sentence in the president's State of the Union speech has been overblown. Bush did maintain that Saddam Hussein was shopping for uranium in Africa -- a charge partly or entirely based on wrong or unproven intelligence -- to bolster the case for war. But this was a small slice of Bush's argument. Troops did not invade Iraq shouting, "Remember the yellowcake." It's a safe bet that when Bush read that one line, he believed it to be true and assumed it was based on reasonable evidence. That's what staff is for. This doesn't mean he ought to escape criticism. Bush condoned, established or ignored an atmosphere in which administration officials felt quite comfortable placing their thumb on the scale when presenting evidence against Iraq. The latest revelation is that deputy national security advisor Stephen Hadley ignored a CIA warning about the uranium-in-Africa charge sent to him and national security advisor Condoleeza Rice. But fixating on Nigergate is sweating the small stuff. There are other instances when Bush told bigger and more substantial untruths for which he has much less of an excuse.

In arguing for war, Bush for months claimed that Saddam was in cahoots with al-Qaida. This was a powerful charge. Bush did not merely say there were links between the Iraqi government and Osama bin Laden's murderous outfit. He declared there was an alliance. During a Nov. 7 press conference, Bush referred to Saddam and exclaimed: "He's a threat because he is dealing with al-Qaida." While it is unrealistic to expect that Bush, on his own, examined the supposed evidence underlying the uranium-from-Africa allegation, it is not unreasonable to believe that Bush, prior to charging that Saddam and bin Laden were in league, would have made certain he was speaking accurately.

Yet weeks earlier, the CIA had released findings that noted it had gathered evidence of a few contacts over the years between the Iraqi government and al-Qaida but nothing pointing to a current partnership. Recent news reports revealed that the October 2002 National Intelligence Estimate on Iraq, most of which remains classified, conveyed an unclear picture of whatever contacts might have existed and warned about the reliability of the intelligence on this subject. So how did Bush reach his no-question-about-it conclusion that Saddam was "dealing" with bin Laden? In this case, he cannot blame an aide for inserting a line into a speech.

That was not the only time Bush or top administration officials made an unfounded claim of connections between Iraq an al-Qaida. During a Feb. 5 presentation to the United Nations, Secretary of State Colin Powell asserted there was a "sinister nexus" between Iraq and al-Qaida. He maintained that a terrorist named Abu Masab al-Zarqawi, who had allegedly helped establish a poison-training camp for terrorists in the Kurdish-controlled territory of northern Iraq, was collaborating with al-Qaida and being supported by Saddam's government. Powell suggested that bin Laden and Saddam were doing business through this middleman. After his speech, terrorism experts and government officials said the evidence of this A-to-B-to-C relationship was spotty. CIA director George Tenet, in congressional testimony, noted that Zarqawi and his network were "independent" of al-Qaida. Yet none of this stopped Bush from saying, two days after Powell's presentation, that Saddam was "harboring a terrorist network, headed by a senior al-Qaida planner."

Not even Powell had described Zarqawi as a "senior al-Qaida planner." And since the fall of Baghdad there has been no public indication that Zarqawi was indeed the missing link between al-Qaida and Saddam. In fact, some evidence has emerged in a German court case that Zarqawi's outfit was a rival to al-Qaida.

Linking Saddam to the evildoers of 9/11 was key to Bush's case for war. After a terrorist explosion in Bali killed more than 180 people, he asserted that Saddam intended to deploy al-Qaida as his own "forward army" against the West. It seems the National Intelligence Estimate missed that, too. And Bush repeatedly warned that at any moment Saddam could pass weapons of mass destruction to his pals at al-Qaida. (In fact, al-Qaida might now have a stronger presence in Iraq than before the war. Reuters reports that some of the anti-United States resistance groups in Iraq have been adopting the slogans of Osama bin Laden.)

Did Bush have cause to believe that Saddam had WMD to give to al-Qaida? In his speech to the nation two days before launching the war, he said: "Intelligence gathered by this and other governments leaves no doubt that the Iraq regime continues to possess WMDs." Yet both U.S. Rep. Jane Harman of California, a moderate and pro-war Democrat on the House Intelligence Committee (which is examining the prewar intelligence), and Richard Kerr, a former deputy CIA director who is conducting an internal CIA review, have said that the intelligence on WMD in Iraq was full of caveats and qualifiers. In other words, it was not no-doubt stuff. They also have reported that U.S. intelligence had not unearthed any evidence of operational ties between Saddam's government and al-Qaida. If so, might that mean Bush lied?

The record is becoming increasingly clear: Bush, to be polite about it, dramatically overstated the central elements of his case for war. The yellowcake screw-up was a minor matter, hardly the direct fault of the president. But when it came to unconventional weapons in Iraq and the relationship between al-Qaida and Saddam, Americans should have been able to assume Bush was monitoring these crucial issues closely and vigilantly and speaking about them carefully and truthfully. In defending Bush on the Niger business, the White House has said that the president is not a fact checker. True enough. But a president ought to be sure he possesses the basic facts before going to war, and he ought to convey them honestly to the public and to the troops that will be acting -- and dying -- on his orders. The outrage over the Niger affair is misplaced, and it is possible that the controversy over this single sentence might divert attention from Bush's more significant prewar assertions. As Bush White House aides say, it is time to move on -- but it is time to move on to scrutinizing the misleading Bush statements that were essential to bringing this country to war and occupation.