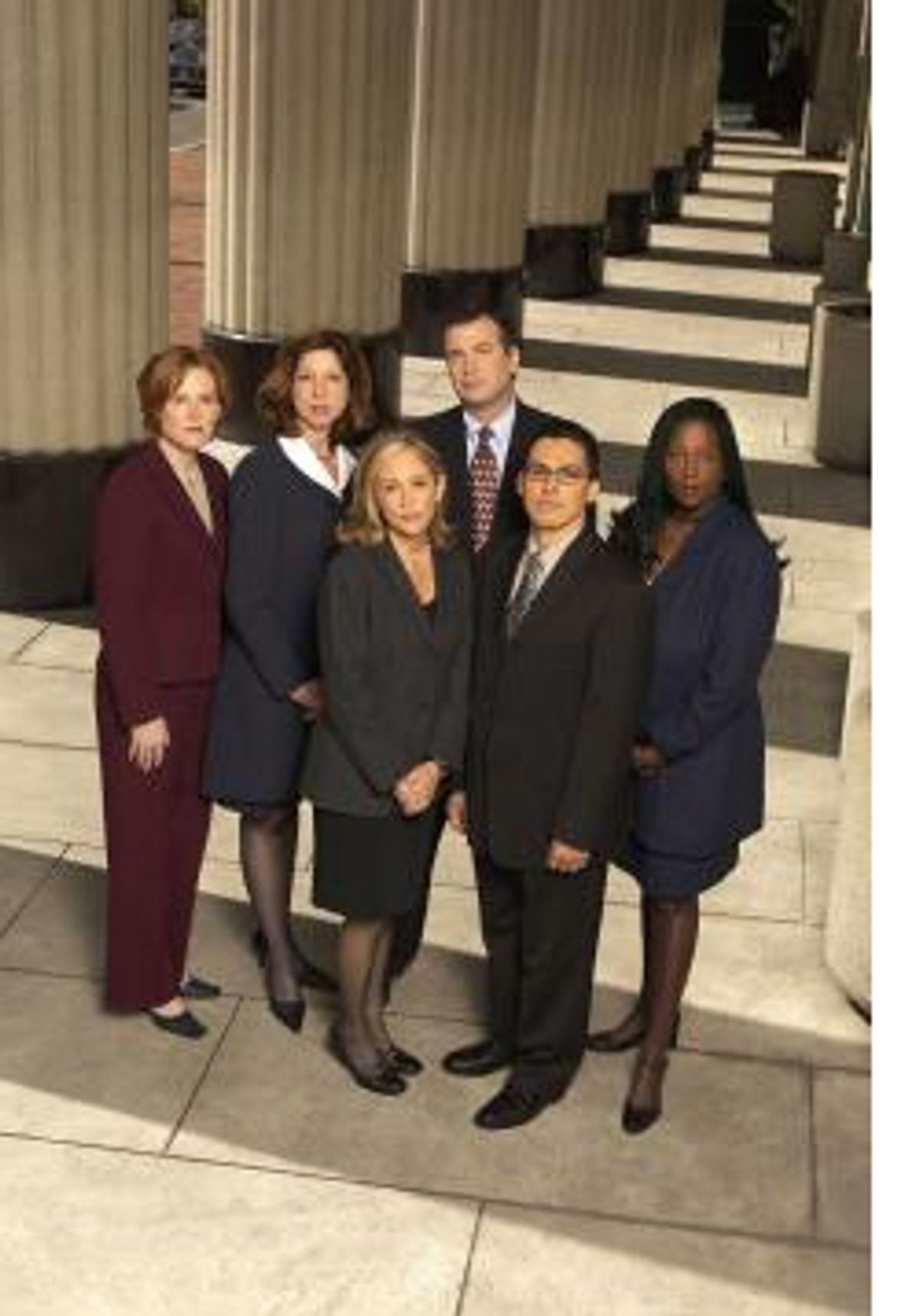 Cop: "How'd you get so criminally sophisticated?"

Suspect: "Ah, [I] watch a lot of TV movies and stuff. You know, I mean, you watch FBI cases and stuff on Discovery Channel."

There's nothing quite like watching a criminal on TV describe how he learned to be a criminal from watching criminals on TV. Yet Dick Wolf's courtroom docudrama "Crime & Punishment" is so sure-footed in its righteousness that it doesn't shy away from murder suspect Ronald Barker's comments to the cops, in a taped confession, that he got some of his bad ideas from TV programs just like the one currently broadcasting his image across the country. (The NBC miniseries just completed one set of episodes, with another to come later this summer.)

Criminals aren't really worth understanding anyway, as we learn from the second season of this unscripted addition to the wildly successful "Law & Order" franchise. They're evil people who do evil things because ... they're evil. Forget that murder suspects Barker and his mistress Ny Nourn shared a dangerous combination of traits: a flair for the dramatic and a simplistic view in which one rash move might be erased by another. For them, no action was worthwhile without an audience.

So when Nourn slept with her boss, she told Barker about it immediately. Barker then concluded that they would either have to break up or Nourn would have to make it up to him. With the kind of melodramatic conviction scraped straight out of a bad '80s suspense thriller, Nourn said she would do anything, anything Barker asked of her! She might just be willing to kill her boss, in fact! Naturally, this option appealed to Barker, as it was both tragically stupid and thrillingly unwarranted.

But what teaches regular -- albeit confused and morally unsound -- people to be attracted to such high stakes, or to contemplate first-degree murder as a solution to the problem of having such an excess of stupidity between them? These two had no backgrounds in crime. There was no practical reason for Nourn's boss to die. Where did they learn to even consider such a thing?

Such questions aren't the concern of "Crime & Punishment" which, as its title suggests, focuses on the crushing wrath of the criminal justice system. Casting prosecutors from the San Diego district attorney's office as real-life heroes who brandish their knowledge of the law for the common good, Wolf sets out, along with documentary filmmaker Bill Guttentag, to create a narrative as compelling as those featured in his fictional "Law & Order" empire. Only this time, instead of piecing together clues to get to the truth, we begin by placing the clearly guilty suspect at the scene, then cheer the prosecuting lawyer on until justice prevails, and the criminal -- who we knew was guilty all along -- is led away in handcuffs. Yet another instrument of evil plucked from the streets and put in jail where he belongs! Clink glasses, smoke celebratory cigarettes, roll credits.

Who knew anyone could make real crimes look so simple? Not that the basic ingredients stretch credibility too much. Loathsome criminals do exist, and presenting criminal prosecutors in a positive light isn't difficult. After all, those who forsake the huge salaries of corporate law firms to take on the difficult work of prosecuting crimes for a D.A. come armed with a strong set of ideals and more than a little concern for others. The prosecutors we meet are without question admirable, dedicated human beings.

And the built-in drama of "Crime & Punishment" is tough to deny, with each scene one-upping the stakes of the last. A prosecuting attorney prays with a murder victim's family before a trial; the now-adult victim of a child molester cries on the witness stand 12 years after the crime was committed; the mother of a drunk driver's victim flinches as a witness describes the scene of the accident. Such moments naturally appeal to the shameless rubbernecker within all of us, not to mention the enraged, morally offended citizen who relies on the judicial system to bring vile offenders to justice.

But no courtroom drama is complete without a snapshot of our determined hero behind the scenes: A studly prosecutor plays football with his lawyer buddies in the park, pausing to sweat attractively and chat matter-of-factly about the Big Case, while another, a red-headed Marcia Clark type, dons boxing gloves and throws punches at her personal trainer. Later, the stud has beers with the boys, laughing incredulously, while the feisty she-lawyer discusses her case at home with her husband. Sure, we might've placed the boys at a strip club for dramatic effect or changed the she-lawyer's husband to a fellow prosecuting attorney, a strapping black man whom she also happens to be sleeping with ... But, oh yeah, this is reality, not the O.J. trial. At least these two are a lot more interesting than Dylan McDermott and Camryn Manheim.

So, as we follow the dramatic arc, our sympathy for the good guys takes over. By the midpoint of the show, we're disgusted with the defense attorney's tactics, we loathe the wide-eyed child molester and we want to strangle the back-talking expert witness with our bare hands. Who would dare cast a shadow of doubt on the tearful incest victims' testimonies, when they're so obviously traumatized by what they went through? And look at that sneaky-looking defense lawyer! What kind of animal would represent someone who sexually abused so many children?

But our judicial system depends on such people, just as it depends on the principle that suspects are innocent until proven guilty, a concept that flies out the window when the tricks of plot and suspense are applied to a real crime. By selecting conveniently clear-cut cases and showing them entirely from the perspective of a heroic prosecutor and a tear-stricken victim's family, the show's producers quickly abandon both the presumption of innocence and any attempt at a nuanced, even-handed approach to the courtroom, undermining the principles on which our system of evaluating the guilt of an individual was founded.

Not surprisingly, when friends and family start grappling with confusing questions, our tireless prosecutors have cut-and-dried answers at the ready. "How can he live with himself after what he did?" asks Heather Olafson, whose husband is on trial for killing her brother and attempting to kill her.

"But you're trying to portray his feelings as if he were you, or if he were some normal person," responds the prosecutor. "He's a killer."

Such talk might be the healthiest thing for the victim of a crime to hear, to avoid torturing herself for things that aren't her fault, but oversimplifying the complexities of domestic violence doesn't necessarily serve the common good. After all, how many women, no matter how high their risk of being battered or killed, believe that they're married to a killer?

I have no doubt that Wolf's heart is in the right place -- flashing the number for a national domestic-violence hotline at the end of the show is certainly helpful. But for someone who regularly asserts the importance of refusing to underestimate the American public's intelligence, his flat portrayals reduce the complexities of criminal behavior to a simple matter of good and evil -- exactly the kind of childlike, black-and-white perspective that lies at the root of most compulsive and sociopathic behavior.

If "Crime & Punishment" bothered to investigate both sides of a case, the show might manage to bring more of the complexities of criminal behavior -- and the pitfalls of the criminal justice system -- to light. Is evil a trait we're born with, after all, or does it grow out of an unacknowledged desire for other things, such as love and respect, both of which are so often confused with attention of any kind, good and bad?

Recognizing the psychological and societal roots of a criminal's actions doesn't make him or her any more sympathetic -- in this case, Nourn and Baker's love of attention somehow makes them even more pathetic and loathsome. But by coloring them bad to the bone, instead of recognizing the point at which their self-centered insecurity mutated into a horrible crime (a crime we're more than happy to see them punished for), "Crime & Punishment" not only turns its back on the central cause of the tragedy these two inflicted, but it pretends that such tragedies only happen when some rare, supernatural, evil force comes into play. Reality is far more frightening and complicated than that.