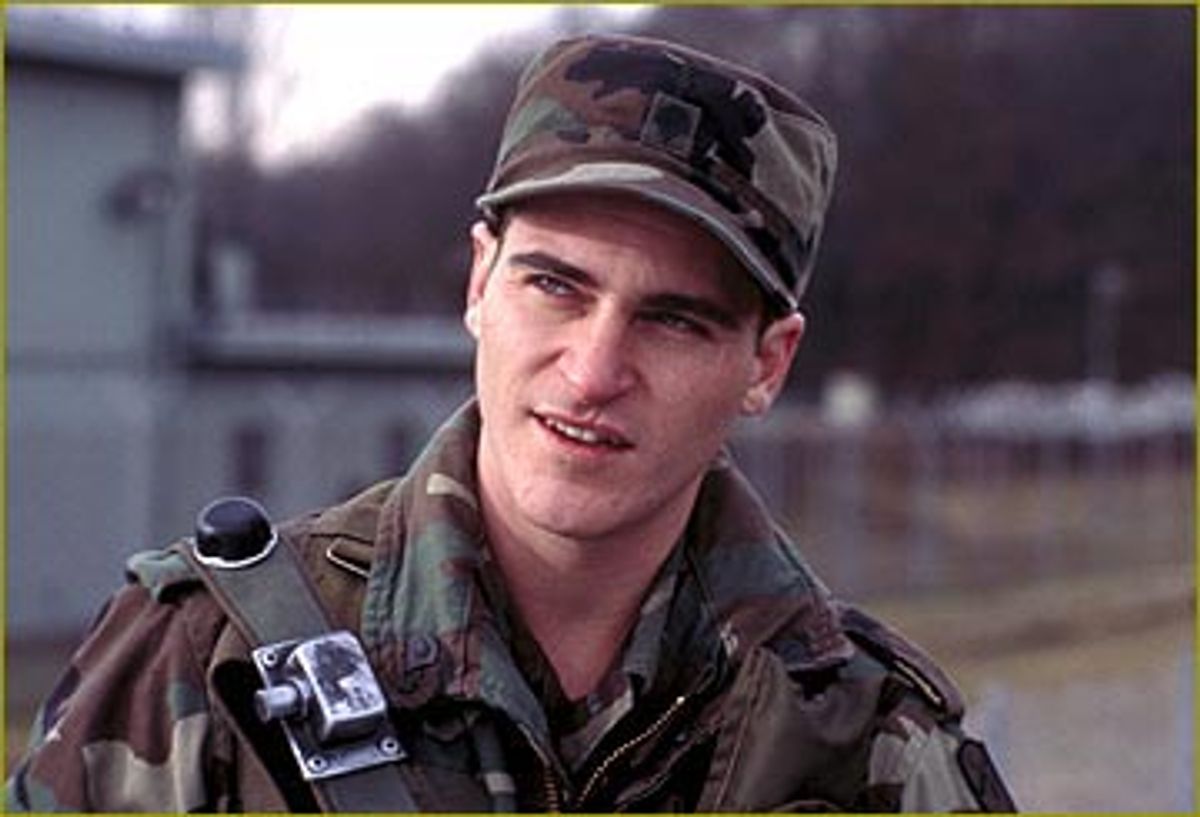 The Australian director Gregor Jordan's "Buffalo Soldiers," about a group of likable, ne'er-do-well U.S. Army recruits stationed in West Germany just before the fall of the Berlin Wall, has been completed for nearly two years. It was delayed first because of the Sept. 11 attacks, and later because of the ensuing wars with Afghanistan and Iraq. Because the picture presents an unflattering view of the American military, its distributor, Miramax, purportedly wanted to hold the picture until the time was right.

Those delays might help the movie more than hurt it -- that noise you hear resounding from the Northeast all the way to Berkeley is the jingle-jangle of counterculture cred in the bank. "Buffalo Soldiers" is a pleasingly disreputable trifle, a picture in which scamps and scalawags come out on top, in which the true bad-asses are duly punished and in which military guys are not necessarily good or evil simply because they're military guys -- like most human beings, they're not wholly defined by their job, even if their job is (roughly speaking, at least) defending their country.

I suppose "Buffalo Soldiers," in which American soldiers stationed abroad during peacetime try to allay their boredom (and make some money) by cooking up massive beakers full of heroin, is anti-military in the broadest sense -- in other words, it's more "M*A*S*H" than "Patton." Still, it's important to note that this isn't a movie about the military per se. Based on a novel by Robert O'Connor, the story deals with a fictional subculture of soldiers who are mostly would-be cons and high school dropouts -- guys who would be rough around the edges whether they were in the armed forces or not.

But the movie's cheery message is that redemption through capitalism is always a possibility. Joaquin Phoenix is enterprising Army clerk Ray Elwood, who has learned to make a quick buck selling giant plastic tankards of Army-issue Mop'n'Glo on the black market. He also occupies a comfortable niche in the base's illegal-substance supply chain, but he's wholesale, not retail. He'll get the heroin ready to go, but he leaves the selling of it to tough guys like Sgt. Saad (Sheik Mahmud-Bey), a member of the base police force and a thug whom Elwood tolerates but clearly dislikes. Elwood is a businessman, not a hard-ass, and he has contempt for people who get things done simply by throwing their weight around.

In short, Elwood is a thief, a wheeler-dealer, and a morally culpable cog in the drug-peddling machine. And as Phoenix plays him, he's likable as hell. Elwood is a charming miscreant in the American tradition, an ambitious upstart who believes wholeheartedly in the spirit of free enterprise, a rapscallion on the surface who's nonetheless able to get in touch, at least occasionally, with his own basic human decency. How can something so quintessentially American be unpatriotic?

Maybe it takes an Australian director to recognize that. Jordan, whose first picture was a gangster comedy called "Two Hands," has put "Buffalo Soldiers" together in a way that feels confident and assured, but his approach isn't so polished that it buffs all the grit out of the story. Jordan's irreverence is surefooted, perhaps too much so -- there are times when the movie feels a bit too pleased with its own naughtiness, particularly in Elwood's needlessly explanatory voiceovers. "War is hell, but peace? Peace is fucking boring," he tells us, a line that sums up the whole movie in a slightly too-tidy package.

But Jordan genuinely cares about most of his characters, and that offsets the occasional brattiness of "Buffalo Soldiers." The script, adapted by Eric Axel Weiss and Nora Maccoby, gives even the story's minor figures some meat. Ed Harris plays Elwood's supervisor, Col. Berman, who barely believes in his own vague ambitions for professional advancement; what he really wants to do is cash it all in and buy a California winery, and when Harris cranks that special faraway blue in his eyes up to 11, your heart goes out to him. His bored, socially ambitious wife is played by Elizabeth McGovern, who seems to have had some fun playing a spoiled, attractive, middle-aged schemer: She and Elwood are two of a kind, so it makes sense they'd be bedmates as well. But she's tougher than he is, and much more manipulative; Elwood is much better suited to Robyn (Anna Pacquin, in a relaxed, appealing performance), the half-sensible, half-wild daughter of Sgt. Lee (Scott Glenn), Elwood's strict new top sergeant.

Lee is a Vietnam vet who's so obsessed with playing by the rules that he shoots right past them, and as Glenn plays him, he's so wry that it takes us a while to realize how terrifying he is. Glenn has the smile of a Mexican Day of the Dead figurine, and the body of one, too, except he's all muscle and bone instead of papier mâché. We get our first big clue into his psyche when he smashes Elwood's fancy Japanese TV set (ill-gotten, of course) with a single karate kick. But Glenn takes the performance much further as the movie progresses; his cruelty becomes quietly symphonic. "Buffalo Soldiers" isn't the sort of movie to keep you awake to all hours, but there's something about Glenn's performance that just might.

Phoenix never makes the mistake of playing Elwood as the lovable rogue -- we like him, all right, but part of our enjoyment of the movie depends on our refusal to trust him completely. Elwood may be blasé about important things, but at least he notices them in the first place: In an early scene, a soldier cracks his skull on a table during a rough impromptu indoor football game; the other guys move away from him, bickering, and Elwood is the one who takes the trouble to step up to the poor guy and pronounces him a goner. Later, when his roommate Knoll (Gabriel Mann) is beat up by some goons who are really trying to get to him, he bandages up Knoll's wounds as if he almost gave a damn. Phoenix never quite lets us inside Elwood's head, but he at least keeps us wondering just what's going on up there.

In an early scene in "Buffalo Soldiers," a tank whose course is being navigated by an out-of-it junkie soldier smooshes a Volkswagen (among other things). The movie is a lot like that tank, rumbling blithely over things that would make anybody with a conscience pause to reflect. Guys get blown up for no good reason, and while Jordan doesn't exactly make light of it, he doesn't belabor it, either. Cinematographer Oliver Stapleton gives the movie a slight graininess that's both muted and a little tawdry -- there's something not quite clean about the look of "Buffalo Soldiers," and given the picture's tone and subject matter, that's an honest visual choice. "Buffalo Soldiers" may not be a nice movie, but at least it's a forthright one. It wears its cynicism on its sleeve; you'd never mistake it for either an officer or a gentleman.