Director Gary Ross yearns to make this saga of the racehorse who transfixed Depression America into a Hollywood classic. But unlike the awkward real-life Seabiscuit, his version is pretty -- and lacks a soul. 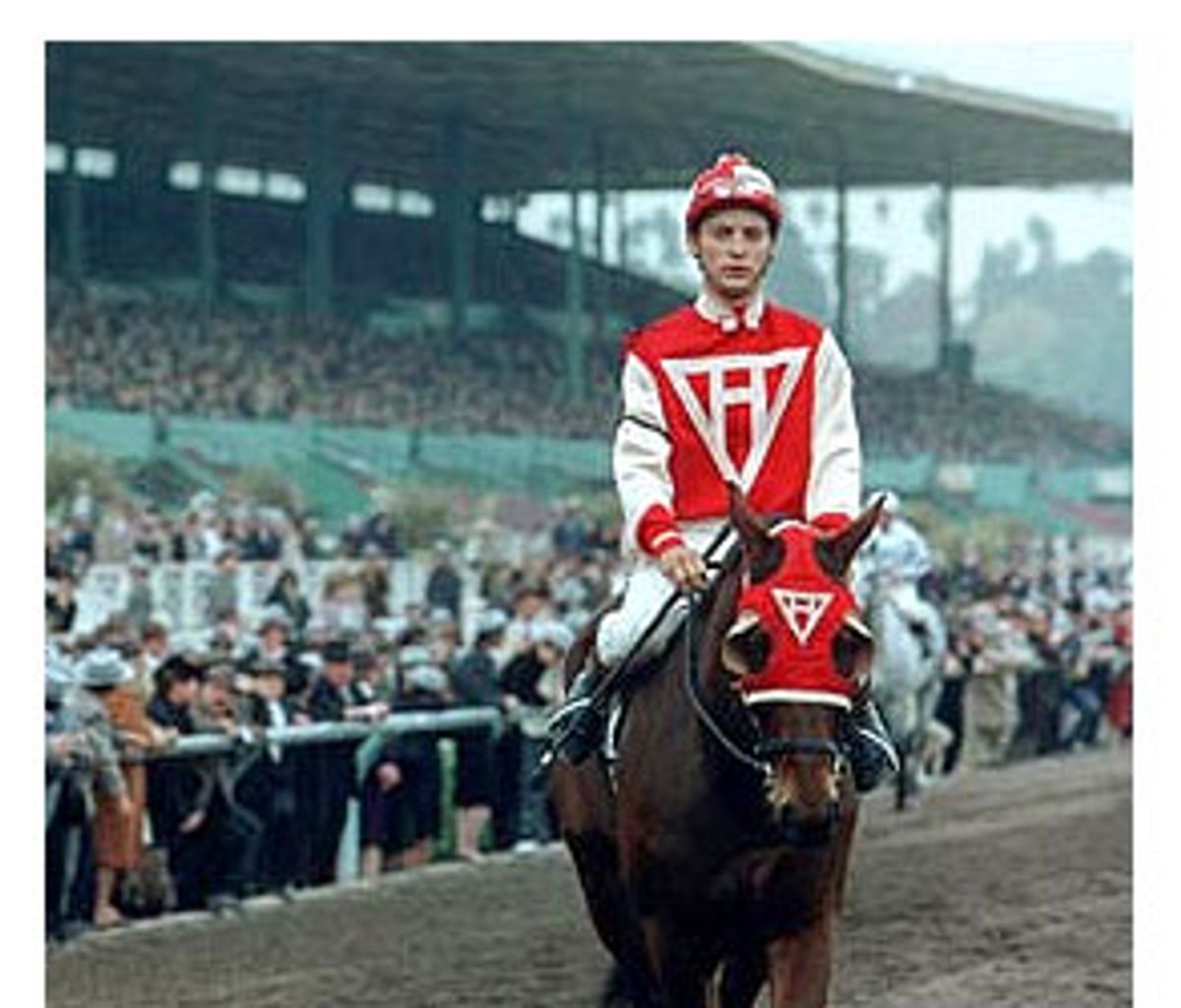 Reading Laura Hillenbrand's wonderful "Seabiscuit" was like finally discovering a standard song you'd heard about but had never actually heard. A love song that drew a firm line between well-deep emotion and sentimentality and never strayed, the book had the mellow, melancholy beauty of a great Nat King Cole side. Hillenbrand earned every tear readers shed over her book.

Watching Gary Ross' film of "Seabiscuit" is like hearing a fully orchestrated version of the same song. It's deluxe and handsome and has no soul. The movie is a special sort of betrayal. Ross, who adapted the book as well as directed, takes everything that Hillenbrand trusted her audience to understand and makes it explicit. He calcifies the emotion of the book into standard Hollywood prestige-movie tropes. Shafts of dusty sunlight pour through the immaculately appointed period interiors. Triumphal music (composed by Randy Newman -- the bad Randy Newman) swells on the soundtrack.

The dialogue, which runs to lines like "Sometimes all somebody needs is a second chance" and "We didn't fix this horse. He fixed us -- and we fixed each other," spell out the meanings with topic-sentence baldness. Just in case we miss the import of what we're seeing, there are montages of archival photographs narrated by historian David McCullough to lend an air of gravity. The movie makes a show of being modest and sober and well-crafted, which is to say it's none of those things.

"Seabiscuit" is an imitation of classic Hollywood filmmaking that wants to proceed directly to moments of surging emotion without providing the things that get us there -- a well-constructed narrative, scenes that allow the cast to interact with each other and develop characters and relationships. Ross ("Pleasantville") is too busy reminding us that we're watching a story of Quintessential American Themes. But the most quintessentially American thing about "Seabiscuit" is that it wallows in Hollywood bushwah.

The subtitle of Hillenbrand's book was "An American Legend," and it was clear that the story of Seabiscuit, a horse written off as a failure and then guided to success by three men who'd had more than their share of bad luck, resonated particularly among Americans brought low by the Depression. But Hillenbrand was content to stick to the particulars of her story and let that meaning emerge implicitly. For all her feel and affection for the past, she never gave in to nostalgia. You couldn't feel nostalgic for the world Hillenbrand described, where horses were often raced to exhaustion, where jockeys were horribly injured or killed in races and decimated their bodies to keep their weight down. Ross gives us one discreet off-screen moment of jockey Red Pollard making himself vomit to make riding weight, and it turns his minuscule food intake into a running joke. (There's a forced politeness throughout the movie. When we see a gaggle of Tijuana whores, McCullough refers to them, unironically, as "companionship.")

Nostalgia is very much the point of Ross' movie. That's apparent not just in the fussed-over period costumes and sets. He wants us to see the '30s as a better place, or at least, in a post-Sept. 11 context, as an inspirational example for how America battles back from adversity. So instead of characters, the three men who came together with Seabiscuit become iconic representatives of the country's past, present and future. Charles Howard (Jeff Bridges) the auto tycoon who owned Seabiscuit, stands for the American entrepreneurial spirit that puts its faith in the future. Tom Smith (Chris Cooper), the quiet trainer who first spotted something special in the horse -- a horseman who had ridden in the last great cattle drives -- represents the country's vanishing frontier past. And Red Pollard (Tobey Maguire), the half-blind journeyman jockey, stands in for all the Americans thrown back on their own resources by the Depression.

It's not that Ross is wrong about what these men represent. It's that he's made them symbols first and characters second. The opening scenes hopscotch back and forth among the three, giving us bits of information but never getting inside them. (Seeing Tom Smith stoically riding in a boxcar with unemployed men is meant to tell us everything we need to know about him and the era.) By the time the three come together, they are too locked in to their thematic functions to develop the intricacies of breathing characters. Everyone I know who loved the book was ecstatic when they heard who had been cast in the three lead roles. (And the moviemakers have done a good job of getting an appropriate Seabiscuit -- a horse who, like the real Seabiscuit, looks about half the height of other horses, with an elongated front and a stubby rear end and crooked legs that fly out to the sides when he runs.)

It's a superb job of casting, but the actors don't deliver on the anticipation of seeing them in these roles. It's not their fault. None of the three leads are bad. It's just that they really don't get to give performances. Bridges plays the authority figure determined to be a decent man, Maguire plays boyish astonishment, and Cooper plays taciturn knowledge. Cooper fares best, maybe because Smith was so quiet that it's possible for Cooper to convey the way Smith had of assessing Seabiscuit in the way he narrows his eyes. And Cooper has made the canny choice of adopting a thin, somewhat high voice, the voice of a man not used to speaking to anyone but horses.

There are moments you can't help but be affected by, like the scene in which Pollard and Seabiscuit, both injured, are reunited and stumble toward each other like long-lost lovers. But that only highlights the discrepancy between what the movie wants you to feel (and what Hillenbrand makes you feel so effortlessly) and what you do feel. We see Howard and Smith and Pollard working together and eating together, but we never get a sense of the bond or community that developed between them.

The actor who comes off best isn't an actor at all. Real-life jockey Gary Stevens has been cast as George Woolf, the legendary jockey who took over from Pollard and rode Seabiscuit to some of his sweetest victories. Stevens, whose long face is strikingly handsome with eerily bright eyes, has the easy charm that some untrained actors are able to project in the movies. His slight awkwardness only serves to make him more appealing, and Stevens has apparently learned one of the most important things for any actor: the ability to listen. If Stevens isn't handicapped by the mythic weight that sits on the rest of the movie, it may be because as a jockey, he connects with the tangible reality of the story.

It must be a tremendous burden of responsibility for a jockey to take on the role of a figure as beloved in the sport as George Woolf. The son of a circus acrobat and a stagecoach driver, Woolf was the most famous and successful jockey of his time, known for his peacock dress and his unblushing candor. The movie doesn't allow Stevens any of that candor and only a flash of that style, but Stevens approaches the role respectfully, without being crippled by reverence. (Sick from diabetes and the cruel dieting jockeys engage in, Woolf slid unconscious from a horse during a 1942 race at Santa Anita and died. Gene Autry sang at his funeral.)

For a movie that wants to present itself as being in a classic Hollywood tradition of well-crafted storytelling, "Seabiscuit" feels in some basic way as truncated as a movie adopting music-video technique. The scenes are short, broken off, never staying in one place long enough to settle in or allow the actors to develop a rapport. When Maguire and Stevens get to trade some dialogue while they're standing side by side, working together to tear down a racetrack, you're grateful for a few snatched seconds of actual give and take. Charles Howard's courtship of his second wife Marcela (played by Elizabeth Banks -- she was the teller who let out a big goofy laugh when Leonardo DiCaprio came on to her in "Catch Me If You Can") is presented as a montage, at the end of which they marry. Couldn't Ross have been bothered to write a scene of dialogue showing the two of them falling in love?

The horse-racing scenes are similarly chopped up. There are a few shots from the rider's point of view that convey what you would never see watching a race: The danger of easing a huge animal through a narrow opening that opens up in front of you. But these shots never stay in one place long enough for us to settle into the rhythm of a race (which, to spectators, can appear steady and stable until one horse makes a move and suddenly you can't breathe), and they don't give a sense of the beauty and terror of a horse race, the way all the strength and speed of the animals lie in their most fragile parts, their legs. They aren't a patch on what Carroll Ballard and Caleb Deschanel achieved in the race sequence of "The Black Stallion" (1981), and they can't touch the racing scenes of Hillenbrand's book, which were so unbearably suspenseful they made me feel as if my heart would stop before the horses did.

Americans are never at our best when we're proclaiming the virtues of the American character. We do much more service to those virtues when we put them into action without the speechifying. In dramatic terms, that means show, don't tell. The inspirational speeches and swelling music that keep rearing their heads in "Seabiscuit" are tinny proclamations. The movie unintentionally undercuts all that when McCullough's voiceover informs us that, when Tom Smith first laid eyes on Seabiscuit, he felt the horse looking through him as if to say, "What the hell are you looking at?" There's more of our native feistiness, our disrespect for authority, our prickly individuality, our conviction that we can take whatever comes our way, in that one tossed-off line than in all the rest of "Seabiscuit." It's that combination of independence and confidence and casual arrogance that led Smith and Howard and Pollard to believe in this funny-looking horse.

Reporting that "Seabiscuit" is a botch is about as much fun as being sent behind the barn with a rifle to dispatch an injured colt. I wanted the movie to do what Hillenbrand's book did: I wanted it to break my heart. (Though I can't be the only racing fan whose heart has already been broken this year, when Funny Cide lost the Triple Crown at Belmont Park.) The movie is already getting rapturous reviews that accept it on the mythic terms in which it presents itself. But next to its source, it's a glorified show pony. Hillenbrand's "Seabiscuit" is for the ages. Ross' version is designed to last only until the next Oscar season rolls around.