"I don't believe in the American dream"

Spanish director Carles Bosch talks about his epic documentary "Balseros," which follows seven Cuban refugees who came to the U.S. by raft in 1994 -- and found their new homeland to be something less than paradise. 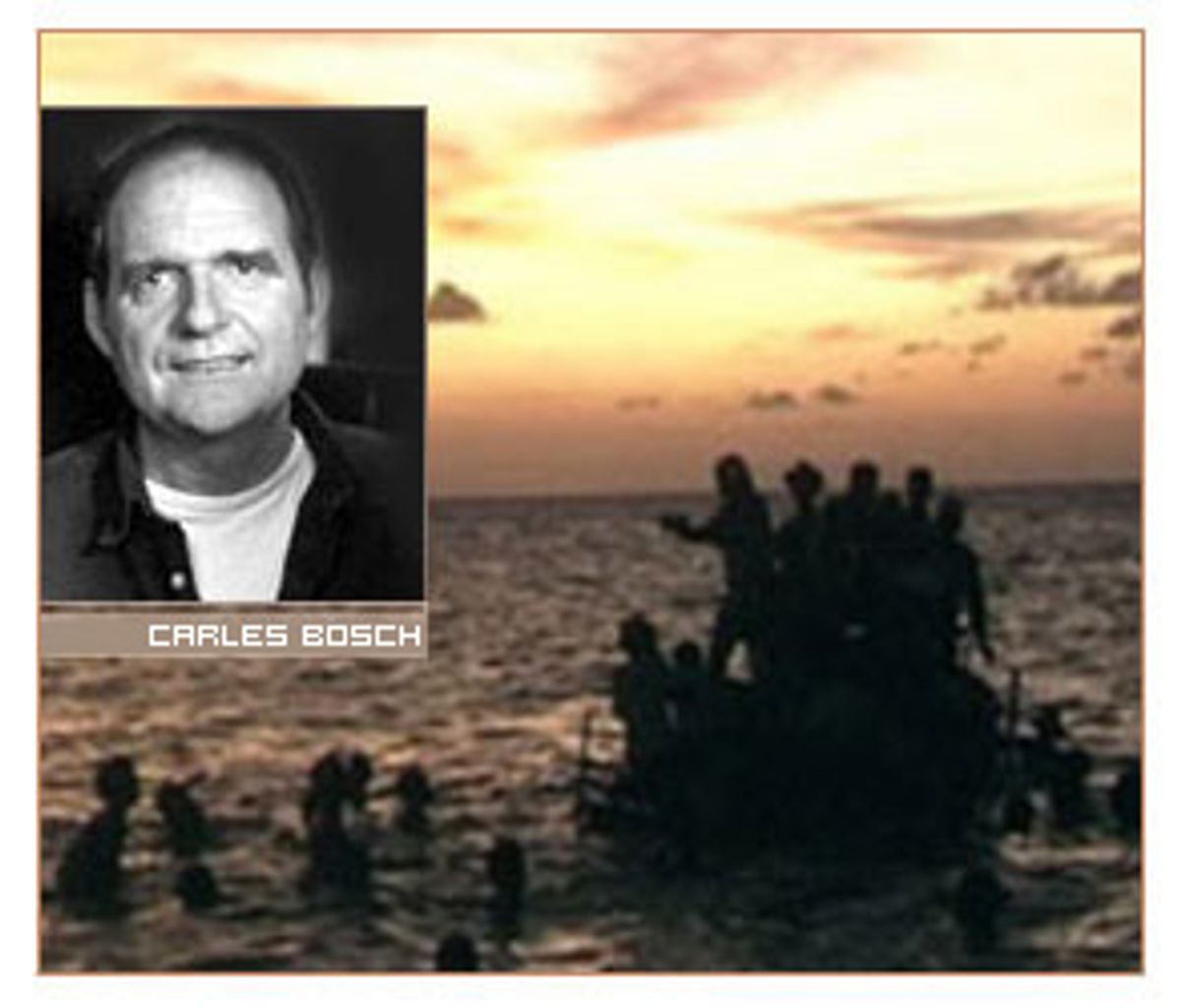 Embarking on the treacherous voyage from Cuba to Florida aboard a flimsy raft would make rich material for any film. But in the new documentary "Balseros (Cuban Rafters)," the 90-mile sea journey represents just the first leg in a series of ever-hopeful and ever-maddening migrations toward that most alluring of holograms, the American dream. The story begins with the historic mass exodus of August 1994, when, in response to a worsening economic crisis and a standoff with the U.S. over refugee policy, Cuban dictator Fidel Castro opened his country's coasts for an unprecedented 15 days. More than 50,000 Cubans seized the opportunity, launching a virtual armada of ragtag optimism and threadbare determination. Following the stories of seven individual balseros, filmmaker Carles Bosch locates a battered humanity amid the chaos, delving into the acutely personal while somehow maintaining a respectful and oftentimes merciful distance.

A veteran war journalist for Spanish television, Bosch did not set out to make a feature documentary. His crew (including co-director Josep M. Domènech) arrived in Cuba that summer of 1994 to shoot a program about the balseros for the Catalan news show "Trenta Minuts" ("Thirty Minutes"). Bosch ended up following his subjects for two years, shadowing them with a video camera as they morphed from refugees to detainees (held, ironically enough, at the United States military base in Cuba's Guantánamo Bay after being intercepted by the Coast Guard) and eventually to full-fledged American residents -- at first in Miami, and then dispersed throughout the country, some in places as far away as Omaha, Neb., and Albuquerque, N.M.

Bosch's completed, hourlong documentary won awards worldwide, but it was not the end of the story. In 2001, he revisited his subjects, now five years into their new lives. This final chapter evokes equal parts heartache, promise and disillusionment. In the words of Misclaida, a balsero who has turned to selling drugs: "I'd like to go anywhere in the world but I'd much rather go home. My country is my country."

For a documentary initially conceived for television, "Balseros" often verges on the epic. Indelible images surface like found commentary: An inflatable tube with the words "In God We Trust" scrawled across it; a T-shirt that reads "Proud to be a Cuban Rafter"; and in a touch of irony that comes near the end, a work uniform that proudly bears the Office Depot logo. But the most stunning sequence remains the exodus itself. In one shot, a balsero holds aloft a plaster Madonna as she plunges into the waves. Another shows an overcrowded vessel spilling over with half-naked passengers, suggesting a contemporary version of Théodore Géricault's 19th century painting "The Raft of the 'Medusa.'" It's an apt distillation of desperate flight: For these drifters, life will always be a matter of sink or swim.

Salon recently spoke with director Carles Bosch. "Balseros" is now playing at Film Forum in New York, with other cities to follow later this year before an eventual air date on either HBO or Cinemax.

How did you manage to find your seven subjects when you first arrived in Havana in 1994?

At first, I was filming anyone who would talk to me, which seemed like everyone, because the city was in a crazy moment. At the same time, I had to be respectful of the situation since so many people were leaving their families behind. It was really not so much that I picked the seven of them, but these were the seven people I somehow managed to portray during those crazy 15 days. There were many others, but I didn't know their names or someone was too similar to another, or I just couldn't find someone by the time we reached Guantánamo.

Did the people you spoke to think they would find a better life in the U.S.?

Yes, but what does "a better life" mean? I don't think someone who goes, for example, from Morocco to Spain thinks that life will be better in Spain. What they think is that maybe they have to do this because of their families back home. The "better life" doesn't always mean a better life in the country where you're going. It could mean a better life for the people you're sending money to. The American dream, the European dream -- I don't believe in those dreams. And I don't think the immigrants believe in them. I think they know perfectly how hard it's going to be.

The scenes of the rafters at sea are powerful. What was going through your mind as you were filming these people at such a vulnerable moment? Were you able to help them in any way?

We were not allowed to help them because the only boat available in Havana that we could use to film belonged to the state. There were many conditions for us: To go back before dark; to start after the sun rises; to never get too close to the rafts; and to never go beyond Cuban territorial waters. I was throwing them bottles of water but that was the only thing we could do. If I had seen someone who was ill or wanted desperately to go back, I would have let them on the boat. But these people just wanted to keep going. What could we do?

What were conditions like for your subjects once they were detained by U.S. authorities at Guantánamo?

I remember one person I was following who didn't make it into the finished film -- he is the brother of Misclaida and Méricys. We see him in the early scenes in Havana and then all of a sudden he disappears from the movie. He made it as far as Guantánamo but was not accepted to the U.S. because he got into a fight in the camp, which I learned was a very common thing. Many people became ineligible just because of little crimes like that. So there was definitely a lot of frustration.

How did you get the idea of showing the footage from Guantánamo to the refugees' relatives back in Havana?

In Guantánamo, people were not able to receive or send letters and there was no telephone. So when we were there and told them that the following week we would be visiting their relatives in Havana, naturally they wanted us to show them the tapes we had made. The families' reactions to the video were much stronger than I could have imagined, and I knew I wanted to film that. It conveys the feeling of being away from the people you love. For Cuban-Americans, exchanging videos with relatives back home is actually quite common. When they visit Cuba, they often bring gifts for the whole family, including pictures and videotapes.

All your subjects eventually reach the United States, but for many of them, their troubles were just beginning. Did you think your portrayal of the U.S. would end up being this unforgiving?

When you say "portrayal" it sounds as if I wanted to make the United States look a certain way. I didn't do that -- I didn't choose Omaha or Albuquerque. I just followed my subjects wherever they went. In fact, I had to hide some things in order not to jeopardize them. Some were working part-time jobs that you don't see, or they were doing illegal things that I couldn't show. There are things you have to hide sometimes as a filmmaker. And as a journalist, you always have to protect and respect your characters.

Did you work differently once you knew you were making a feature documentary?

I worked differently without knowing it. There are books on how to make documentaries, but I haven't read them. I did learn that you cannot make a documentary using the rhythm of pure journalism. I think it helps audiences follow the story if you enter into the atmosphere of fictional cinema, where every minute of the movie pushes the story forward and where the audience learns things little by little. That's why I hired someone to conduct the interviews, because I needed the subjects to be expressive. I didn't want them to be talking directly to me because they knew I already knew their stories. So I was often behind the camera whispering, "Ask him again, I didn't like the answer," or "Please, Oscar, you forgot to tell him something that I remember you told me." We also decided not to use a narrator. That made things more difficult because it meant that every detail you see has to give you a clue about what the person is feeling.

When you visited your subjects again, five years later, what about them surprised you the most?

The obvious things at first -- their clothes and even their accents. But in terms of making the movie, the difference is that instead of the stories constantly moving forward in a vertical direction, they were now spreading out horizontally. So it was a completely different rhythm. The audience has to learn not only how these people are now, but how it was for them for five years. In the case of Méricys, it was a special case. She's the last one to come to the U.S. [on an official U.S. visa] and so she reintroduces the vertical movement when she tries to find her sister, who arrived before her.

In this country we encounter immigrants all the time and we think they've been immigrants all their lives. When you see a documentary about Rwandan refugees, for example, they look like people who were always refugees, when maybe two months before, this person was a goalkeeper of the local soccer team, or a D.J., or maybe a husband who was beating his wife.

When American audiences watch this movie, how do you want them to see their own country?

I want them to see that this isn't a paradise, in much the same way that I don't want the French or the Spanish to think their country is a paradise. I think we have to be very honest with ourselves. When my co-screenwriter [David Trueba] returned to Spain after traveling with us in the U.S., he wrote a column for a Spanish weekly. He wrote that his experience in America was like being invited to someone's house for dinner and all of a sudden, you move the carpet because you want to find something you've lost, and you see that it's full of shit. I'm not saying the U.S. is necessarily full of shit, but I'm saying how incredibly hard life is here for the middle class down to the working class. I don't want to sound anti-American, but that's the way it is. And I criticize my country 10,000 times more than I criticize the U.S. It doesn't mean that I hate my country, or your country. I didn't want to move the carpet.