If Democratic centrists want to repeat Bill Clinton's success, they should stop attacking fellow Democrats as "far left" and concentrate on uniting the party against Bush. 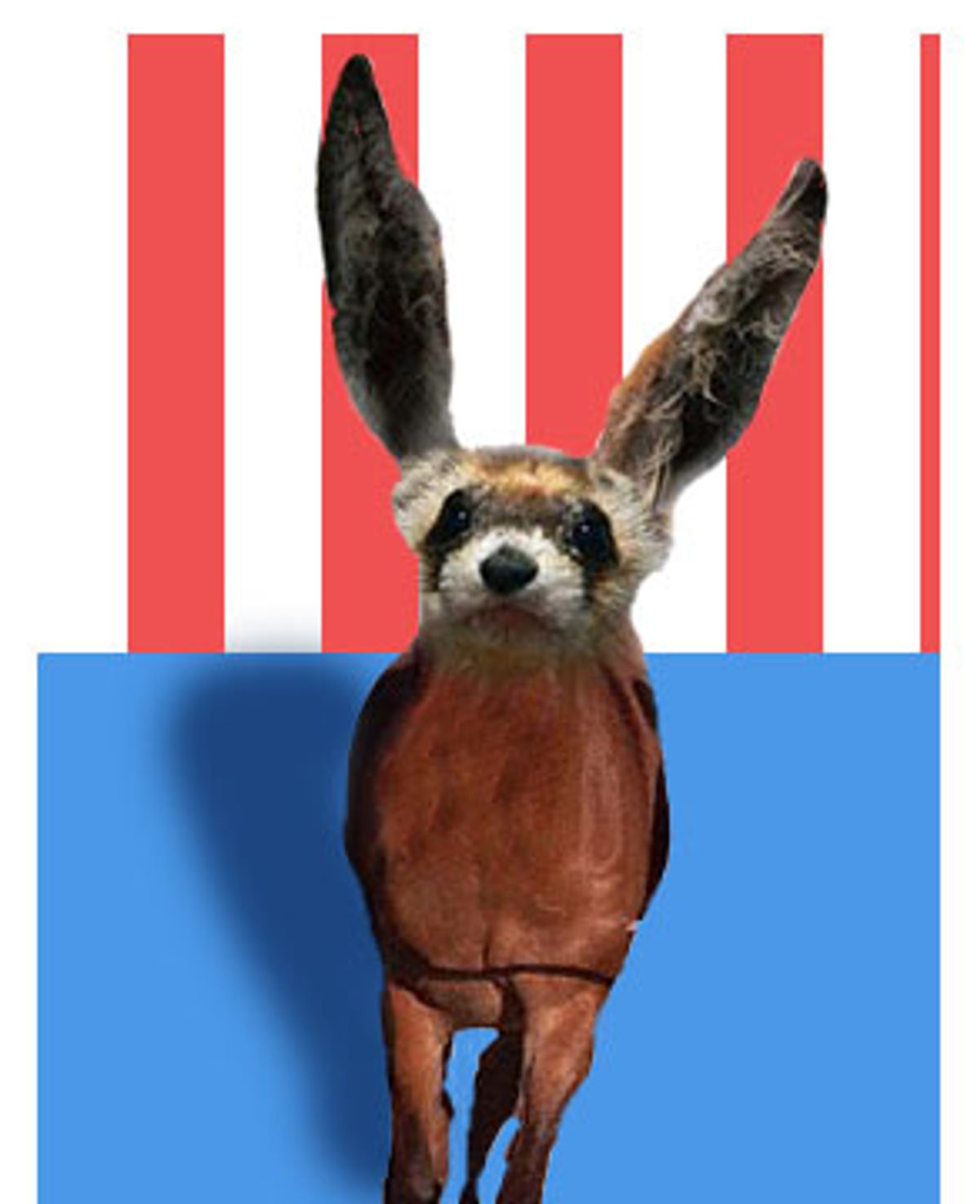 Has Karl Rove taken over the Democratic Leadership Council? I can't think of another explanation for the centrist clique's destructive guerrilla war against fellow Democrats. Tuesday's New York Times outlines the latest assault: A DLC conference this week devoted to blasting the party's presidential hopefuls for their "far left" critique of President Bush's budget-busting tax cuts and his dishonesty in leading the nation into war. If hitting Bush on those blunders really makes Democrats unelectable, the nation is in worse trouble than the DLC thinks.

No one knows right now which issues will carry the day come November 2004. Bush is stumbling lately, but an economic rebound and some success in pacifying Iraq could send his poll numbers soaring again. The left's perhaps-fatal weakness is wishful thinking about Bush's vulnerability. Yet two facts are and will remain politically crucial: The economy is a shambles at least partly because of Bush's wrongheaded, reward-the-rich tax cuts, and the nation still doesn't know the truth about why we started a bloody, costly war that's a long way from over. Democrats can and do disagree about how to deal with both sets of issues -- how to repair the economy as well as Iraq -- but saying the party shouldn't criticize Bush's approaches is dangerous and delusional.

I live in California, though, and this behavior is familiar to me: It's the standard M.O. of the state Republican Party, whose annual conventions always feature a circular firing squad as part of the entertainment. Decades of ideological infighting and far-right litmus testing has ensured that only the least electable GOP candidates survive in California. Of course there's a key difference between the DLC and California Republicans, in that the centrist group insists it's opposed to extremism, and only wants to make the party more palatable to mainstream voters, while the state GOP seems determined to advance only the most extreme politicians to its top ranks. But the Democratic centrists seem in danger of adopting a political terror strategy that resembles the California GOP's, and it involves doing the enemy's work for them: damaging your own party's candidates by declaring them ideologically flawed and unelectable before the other side has a chance to.

Now all that can save California Republicans, of course, is strongman Arnold Schwarzenegger jumping into the freak-show election to recall Gov. Gray Davis (which is looking less likely by the hour). Likewise, the DLC needs its own miracle to win back the White House -- the second coming of Bill Clinton -- and that's not going to happen. Clinton, like Schwarzenegger, did the politically impossible: He took the DLC's shelves of policy-wonk manifestoes and dark warnings about special-interest politics, and turned it into an agenda for winning elections and governing, with his own charm and his own brand of compromise and conciliation, not DLC founder Al From's. The DLC thinks it made Bill Clinton, but in fact Clinton made the DLC. Without his charisma and political smarts, its earnest, castor-oil approach to politics and policy would never have won a national election.

Let me be fair and admit that the DLC did several crucial things for the Democrats. The DLC critique forced the party to face up to the terrible failure that went along with being a whiny collection of special interests -- labor, blacks, gays, women, assorted malcontents -- a dysfunctional amalgam that was weaker, not stronger, than the sum of its parts. The DLC compelled the party to acknowledge that more government spending on welfare, on schools, on public services, hadn't wiped out poverty or improved public education, and that innovation, accountability and results had to be what Democrats demanded, not merely new programs and funding.

And the DLC may ultimately be right that the candidates on the party's left, most notably Internet darling Howard Dean, are ultimately unelectable in a national race. John Judis is one of the smartest political thinkers in the country, so when he says the numbers don't add up for a Dean candidacy, I take that very seriously. But as Garance Franke-Ruta argues, the numbers aren't adding up for DLC darlings Joe Lieberman and John Edwards, either. I think Lieberman has about as much chance of getting elected president as Dennis Kucinich does, frankly. Neither of them can pull together a large enough coalition of Democrats to win the nomination, let alone the election.

I voted for John Kerry in the MoveOn.org primary, because I currently think Kerry's the most electable Democrat in the race, and I wanted to ensure he got enough votes from the left that he won't be able to afford to write it off. I don't know why the DLC doesn't pursue a comparable strategy with Dean -- maintain a respectful relationship and mobilize its own constituency to show there's victory in a coalition that includes centrists. The problem is, the DLC doesn't have its own constituency, outside of Beltway think tanks and the Op-Ed pages. The DLC does ideas, it doesn't do retail politics. So it has little to offer Dean besides a good scolding.

I don't know what combination of left, right and center will be necessary to beat Bush in 2004. All I know is that branding the Democrats' opposition to Bush's tax cuts and Iraq debacle "far left" does Karl Rove's work for him. For a bunch of guys whose appeal is supposed to be their smarts, that's awfully dumb politics.

The DLC's hero Bill Clinton won two presidential elections by pulling together the party's left and right wings. If the DLC -- and Howard Dean supporters -- want to win back the White House, they've got to do the same.