At a meeting of Hollywood and progressive supporters in her West L.A. home, Arianna Huffington gets ready to run for governor. Her goal: Take Sacramento and shake Washington. 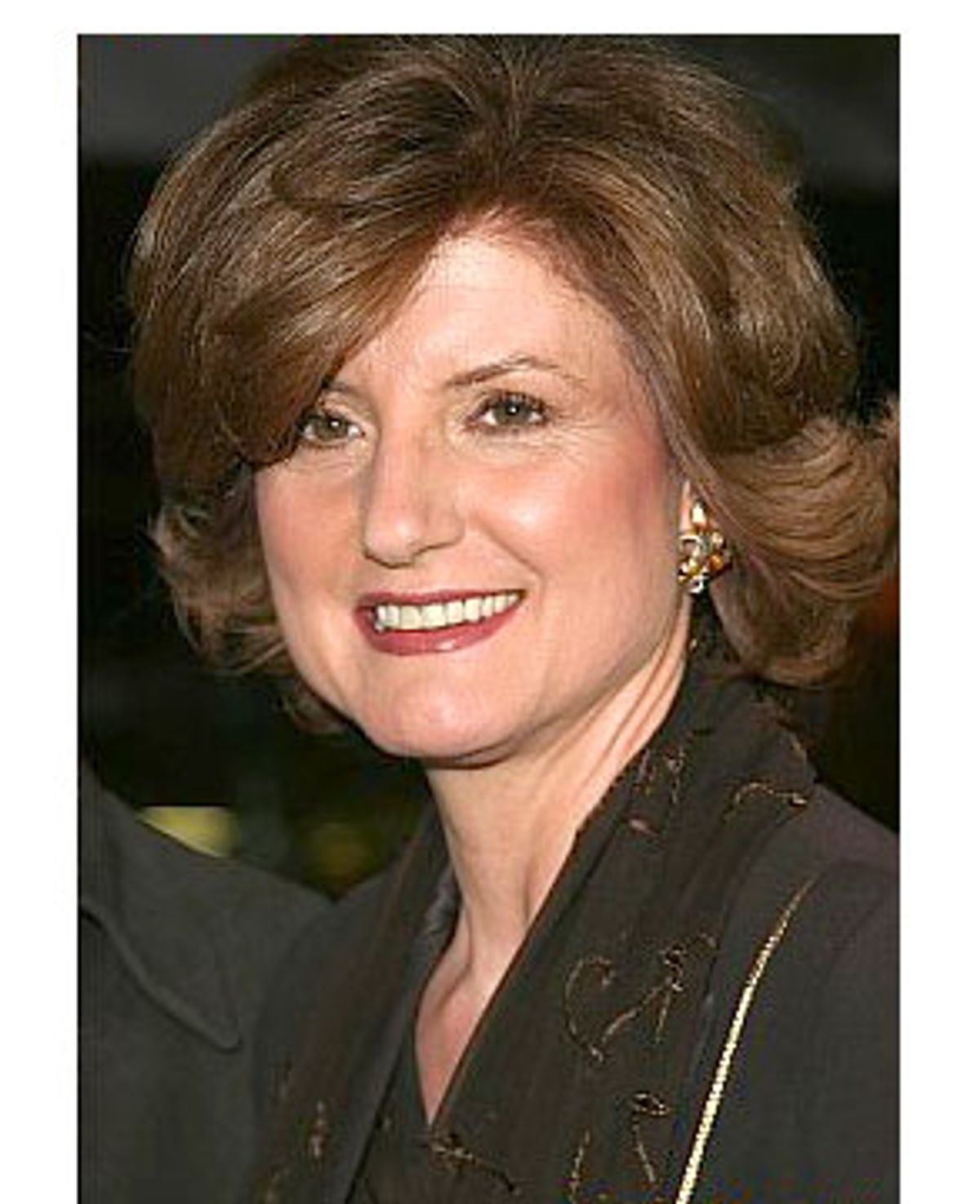 It's not official yet, but she's off and running. That was the message at Arianna Huffington's home in posh Brentwood, Calif., on Sunday afternoon, where several dozen political activists and advisors gathered to hear the author and Salon columnist make her case for jumping into the race to recall California Gov. Gray Davis. The only thing that would keep Huffington out of what is shaping up as an electoral free-for-all would be the sudden entry of a major Democratic rival to Davis -- and Sen. Dianne Feinstein, the only likely such 800-pound gorilla, is still rejecting entreaties to rescue the party from the rapidly melting Davis.

"If Feinstein runs, I won't," Huffington told the Sunday gathering. "This campaign is to win, not to be a spoiler and hand the state over to the Republicans."

This is the burning question for California progressives as they contemplate a Huffington run: Will it wind up as a horrible replay of November 2000, with the populist columnist cast in the Ralph Nader role, handing a crucial victory to the GOP? Bill Zimmerman, the veteran California campaign strategist who has agreed to manage Huffington's race, says no. Zimmerman points out that under the rules of the Oct. 7 recall election, voters can cast their ballot against the recall initiative and still vote for an alternative to Davis on the same ballot in case the recall wins. If Davis, whose approval rating languishes around 20 percent, continues to fade in the polls -- and a new internal poll by the California teachers union reportedly shows him sinking fast, with a recall winning by a 57-43 margin -- it would be "irresponsible not to have a progressive alternative on the ballot," Huffington said on Sunday.

With her high media profile and access to money, Huffington's backers say she's the only progressive candidate who could mount a challenge to big-spending Republicans. If Arnold Schwarzenegger decides to take a starring role in the race -- and on Monday he denied reports that he was out, although his camp apparently told one national newspaper he was "leaning strongly against" running -- he would likely crush any lightweight rivals in his path. Huffington, who would run as an independent, might be the only candidate who could stand between him and the governor's mansion, her supporters argue.

Standing in her living room, next to a piano with framed photos of her two daughters and celebrity friends like Bill Maher, who has made her a regular on his TV shows, Huffington hit all the progressive chords at the Sunday meeting. She vowed to "nationalize" the campaign, turning it into a referendum not just on Davis' governorship but on the Bush presidency and the corporate looting of the state and nation.

"If, as [Republican challenger] Bill Simon says, Gray Davis is fiscally irresponsible, then George Bush is fiscally insane," she told the group. One of Davis' chief mistakes, Huffington argues, was his failure to explain to California voters why the Bush White House -- and its old friends at Enron and the energy industry -- are largely responsible for the state's budget woes. Huffington, whose recent bestseller "Pigs at the Trough" savages the reign of greed, corruption and environmental plunder under Bush, said she can't wait to take on the president's buddy Schwarzenegger. "It will be 'the hybrid vs. the Hummer,'" said the near-candidate, who launched a media campaign last year against gas-guzzling SUVs.

"I want to build a progressive coalition that transcends this campaign," Huffington said, "not just to make sure we beat Bush in California next year, but to provide a template for how other states can beat him too. We've all seen a lot of waves break on the beach and not amount to anything. But a campaign that energizes people creates the possibility of a tidal wave."

Many of those crowded into Huffington's living room were clearly ready to be swept up into something big. Among those gathered were friends and relatives with Greek accents every bit as thick as Huffington's (she is the daughter of a Greek newspaper publisher), environmentalists, drug policy reformers, civil rights activists, antiwar veterans and Hollywood money-tree shakers. Holding a copy of Joseph Palermo's book on Bobby Kennedy's political evolution, "In His Own Right," which contains a chapter on Kennedy's 1968 California primary campaign, Huffington invoked that legendary race, which still has a sacred meaning for the state's baby boomers. "Bobby was also attacked as a party splitter by the LBJ wing," she observed. "But he won the primary by linking progressive groups like the farmworkers with Hollywood money."

But even Huffington cannot count on wresting Hollywood away from Davis. Indeed, some of the entertainment industry friends she gathered in her home Sunday expressed concerns about her deflecting energy from the effort to beat the recall, which one characterized as "little different than a Third World coup engineered by Republicans." The national Democratic Party is promising a big campaign to support Davis, with a dream team of political stars, including both Clintons, dispatched to make the case that the recall is just a replay of impeachment and the Florida debacle -- the sore-loser ploy of Republicans who play nasty when they can't win elections fair and square.

And some friends at the Sunday gathering worried about Huffington herself, and whether her stature as a political commentator would be diminished if she ran a losing race in which she will surely be ridiculed by the media as well as by her political opponents. One Republican strategist told Salon last week: "We've talked about Huffington more as a joke than anything else. With Arnold and Arianna, nobody would understand what either of them is saying."

Nor is it certain Huffington can move beyond her glittery base. Two veteran Latino activists, Joe Benitez and Joe Sanchez, attended the meeting, and both of them told Huffington she had no chance of winning unless she built a following in the state's Latino and black communities. Van Jones, an African-American activist from San Francisco who has led a "Books Not Bars" campaign to shift state funds from prisons to schools, kicked off the draft Huffington movement with a new Web site and has signed on to run her grass-roots campaign. Environmentalist Julia Butterfly Hill, the young woman who protected an ancient California redwood from loggers by refusing to move from its limbs, also attended Sunday's meeting. She told Huffington that she was inspired by her "creativity and humor," reminding the group that "we need to put the party back in party politics" as well as widen the political dialogue beyond "how many bombs should we drop and how many people should we throw in prison."

Huffington told the gathering that she has also won key Green Party support, with Peter Camejo, the party's recall candidate, agreeing to drop out and back her after she announces. "He told me that now is the time for the Green Party to be part of a winning campaign to change the political structure." Camejo won 5 percent of the vote running against Davis last year, and with some analysts predicting the next governor could be elected with a mere 20 percent of the vote, that's a significant base for Huffington.

Asked about her standing with gays, Huffington quipped, "My husband is [gay]," to a burst of laughter from the group. Adding to the carnival aspects of what the national media, always eager to lampoon California, is already billing as the political freak show of the year, was the announcement by Huffington's ex, Michael, that he too was seriously considering throwing his hat in the ring. A former Republican congressman turned Hollywood producer, Michael Huffington spent a record $30 million of his oil fortune in a losing 1994 Senate race against Feinstein, before divorcing Arianna and announcing he was gay. Huffington, who lives just a few blocks from Arianna in Brentwood, claimed that his decision to take out filing papers on Friday had nothing to do with his ex-wife's plans. But their 12-year-old daughter reacted negatively, said Arianna with a laugh on Sunday: "She told him, 'Don't run, Daddy, you have no base.'"

Huffington said she was not concerned about her ex's possible challenge, which Republican strategist Dan Schnur is already gleefully billing as "Michael and Arianna -- the hit new reality show of the fall." At the least, said Huffington, it will assure those progressive voters who remain skeptical about her political evolution that she has genuinely changed her views since her married days: "It will make clear the two Huffingtons are not on the same side of anything."

Zimmerman estimates that Huffington's race, a two-month burst to the Oct. 7 finish line, will cost about $10 million to compete effectively in the state's vast media market. Much of this, he predicts, can be raised on the Internet, in the manner pioneered by groups like MoveOn.org, with whom he has worked. Zimmerman told the Sunday gathering that one progressive group he worked with made a whopping $220,000 in three hours after putting its commercial on the Web. "But this campaign will be won primarily with passion, not money," he said. "If Arianna succeeds, you'll see a transformation of California's politics on the order of what Hiram Johnson accomplished when he was elected governor in 1910, driving the Southern Pacific railroad lobby from the halls of the Capitol and turning California into a beacon of progressivism for years."

Huffington told the group she will announce her final decision sometime next week, before the Aug. 9 filing date. "I want to wait just a few days to see if any political reasons emerge for me not to run" (read: a last-minute entry by Feinstein). But she has clearly girded herself for the rigors of a campaign. "I've always been a risk-taker, except with investments," she told the Sunday gathering. "I'm very comfortable with uncertainty."