Was Led Zeppelin really a proto-punk outfit in hippie garb? With the million-selling live box set "How the West Was Won," Jimmy Page wants you to think so. 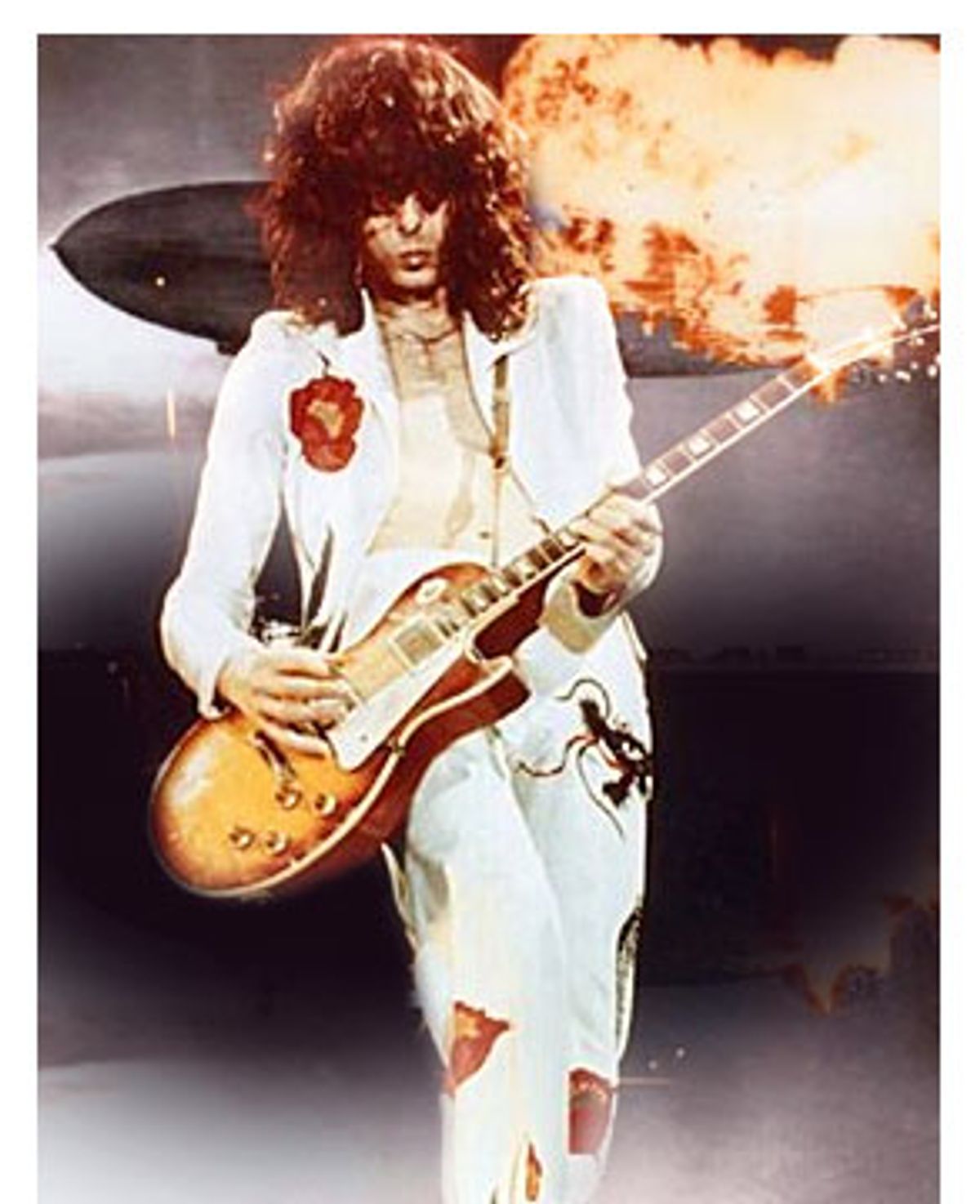 Like just about everyone else who came of age in the punk era and embraced the music's loud-fast rules, I despised Led Zeppelin as a kid. I mean, who needed their blustering, Tolkien-inspired epics, their interminable guitar wanking or, especially, their loathsome drum solos? Musical nirvana was just an adrenaline shot away, after all, and it was powered almost exclusively by poorly played power chords. As Greil Marcus explains in his seminal punk history, "Lipstick Traces," for the three minutes that it's on, every good punk song is the greatest thing you've ever heard.

Led Zeppelin, of course, was the antithesis of punk: excessive, self-indulgent, and -- worst of all -- wildly popular even after the band's timely demise in 1980. As far as your typical Pistols-lovin', hippie-hatin' 15-year-old was concerned, Led Zeppelin was a relic from an embarrassing past that didn't know when to shut up. And that was a huge problem: With AOR airwaves clogged with the likes of "Kashmir," "The Rain Song" and -- ugh -- "Stairway to Heaven," how on earth were punk worthies like the Ramones and the Buzzcocks ever supposed to get their due?

Well, be careful what you wish for. Nowadays the airwaves are lousy with bands like blink-182 and Good Charlotte, perpetual teenage boys who've discovered how to profit mightily from the successful business model that Green Day based on the original punks' R&D. And speaking of those old fogies, outfits like the 'Cocks and the Clash -- God bless their proletarian hearts -- have made more money in the last few years as car-commercial soundtrackers than they ever did back when they were the best bands on the planet. The times, in other words, they have a-changed.

But maybe they're about to change back. Released in May, Led Zeppelin's three-disc live set, "How the West Was Won," debuted at No. 1 on the Billboard 200 and, a mere two months later, has already surpassed the million-sold mark. A companion-piece DVD (cleverly titled "DVD") has racked up mega-success, too.

And you know what? The group has never sounded better. In the same way that a dreary sonic landscape of pompous classic rock made the Sex Pistols sound so transgressive, the Paxilated, perky stuff that radio can't get enough of these days makes Led Zeppelin sound like a gang of genuine subversives. Plus, the band could play real good, too.

"How the West Was Won" finds Led Zeppelin at the peak of its powers and in the milieu for which it was justifiably most famous: the concert hall. Culled from two shows performed in California in the summer of 1972, the set list runs the gamut from the pithy (an elastic take on "Over the Hills and Far Away") to the bloated (25 minutes and change of a thoroughly debauched "Dazed and Confused.") But even at its most bombastic, the group is effortlessly on-the-one throughout, nearly spring-loaded even. To quote Robert Plant's economical estimation, at this point in its career, Led Zeppelin was "shit hot."

Indeed. The dearly departed John "Bonzo" Bonham practically bolts would-be pop tunes such as "Dancing Days" and "The Ocean" to the ground and, along with bassist extraordinaire John Paul Jones, lays the foundation for Plant and band architect Jimmy Page's haunted house of blues. Proud purveyors of a strange brew of psychedelia, American R&B and heavy-metal thunder, Led Zeppelin -- like the Beatles and, maybe, Prince -- achieved a peculiarly rarified status in rockdom: The band got to be both hugely popular and as weird as it wanted.

Take, for instance, the mighty "Black Dog." Even in its famous studio incarnation, the song is a blur of slurred, off-kilter rhythms and Page's malicious axe grinding. Here, absent the studio sheen of "Led Zeppelin IV" and the opportunity to slather on umpteen layers of additional guitar, the track is a bare-knuckled monster. Frantically paced but lumbering, it's like Frankenstein's creature on a cocaine bender. And that goes triple for the band's body-slamming version of "Whole Lotta Love," which, for the 23 minutes and eight seconds that it's on, may be the greatest thing you've ever heard.

That lengthy stretch of time isn't exclusively devoted to "Whole Lotta Love," however. Led Zeppelin was a band of genuine music obsessives, and so the group takes the opportunity to pay tribute to its cherry-picked idols, medley-style. Snippets of John Lee Hooker's "Boogie Chillun," Jerry Leiber's "Let's Have a Party," and even Gene Pitney's "Hello Marylou" are sandwiched in between neck-cracking takes on "Whole Lotta Love's" strutting crunch. As Led Zeppelin delivers it here, in fact, the song is pretty much a musical history lesson.

For that, we probably have Professor Jimmy Page to thank. Sure, as anyone even vaguely familiar with Zeppelin mythology knows, the man in his prime was a rock 'n' roll demigod, a debauched Aleister Crowley acolyte with an outsized capacity for substance abuse and a taste for younger women. Yet Page is also the band's nerdy archivist -- it took years of nervous hand-wringing, after all, before he finally deigned to release the shows that make up "How the West Was Won." During Led Zeppelin's heyday, Page was the band's resident musical historian, too, crafting riffs that paid sly (and sometimes litigious) homage to the likes of Little Richard, Willie Dixon and Howlin' Wolf.

But Led Zeppelin at its best fused disparate influences into something huge and brand new, and on the first disc especially, "How the West Was Won" attests to the raw power of the band's alchemy. The track list reads like a greatest-hits collection: "Immigrant Song," "Heartbreaker," "Black Dog" and "Over the Hills and Far Away" kick-start the set.

But what's truly thrilling here is the way this band of supposed dinosaurs attacks each and every one of the tunes like a hardcore act. Page's guitar snarls, Bonham lays thunderous waste to his drum kit, and -- particularly on the set's corrosive rendition of "Immigrant Song" -- Plant's maniacal wail is genuinely frightening. Every single one of these songs, moreover, is played at lurching, light-speed tempos and with Gatling-gun ferocity. All that's missing is Dee Dee Ramone counting off "One-two-three-four!" at the top of each tune.

Punk ideology, of course, required not only that you love certain bands but also that you hate certain others -- and Led Zeppelin was the very definition of the band you just had to hate. But "How the West Was Won" reconfigures the Zeppelin canon. Judging from the tight, feral sound the band uncorked over two nights in 1972, it turns out that these guys might've been proto-punks in hippie clothing all along. Maybe Jimmy Page has known this for a while; in 1998, after all, he and Plant did make a record ("Walking Into Clarksdale") with punk-rock poster boy Steve Albini at the studio controls.

For the rest of us, though, "How the West Was Won" is an ear-opening experience. Who knew they had it in 'em?