The latest in the "American Pie" franchise is exactly the kind of movie that gives sequels a bad name. 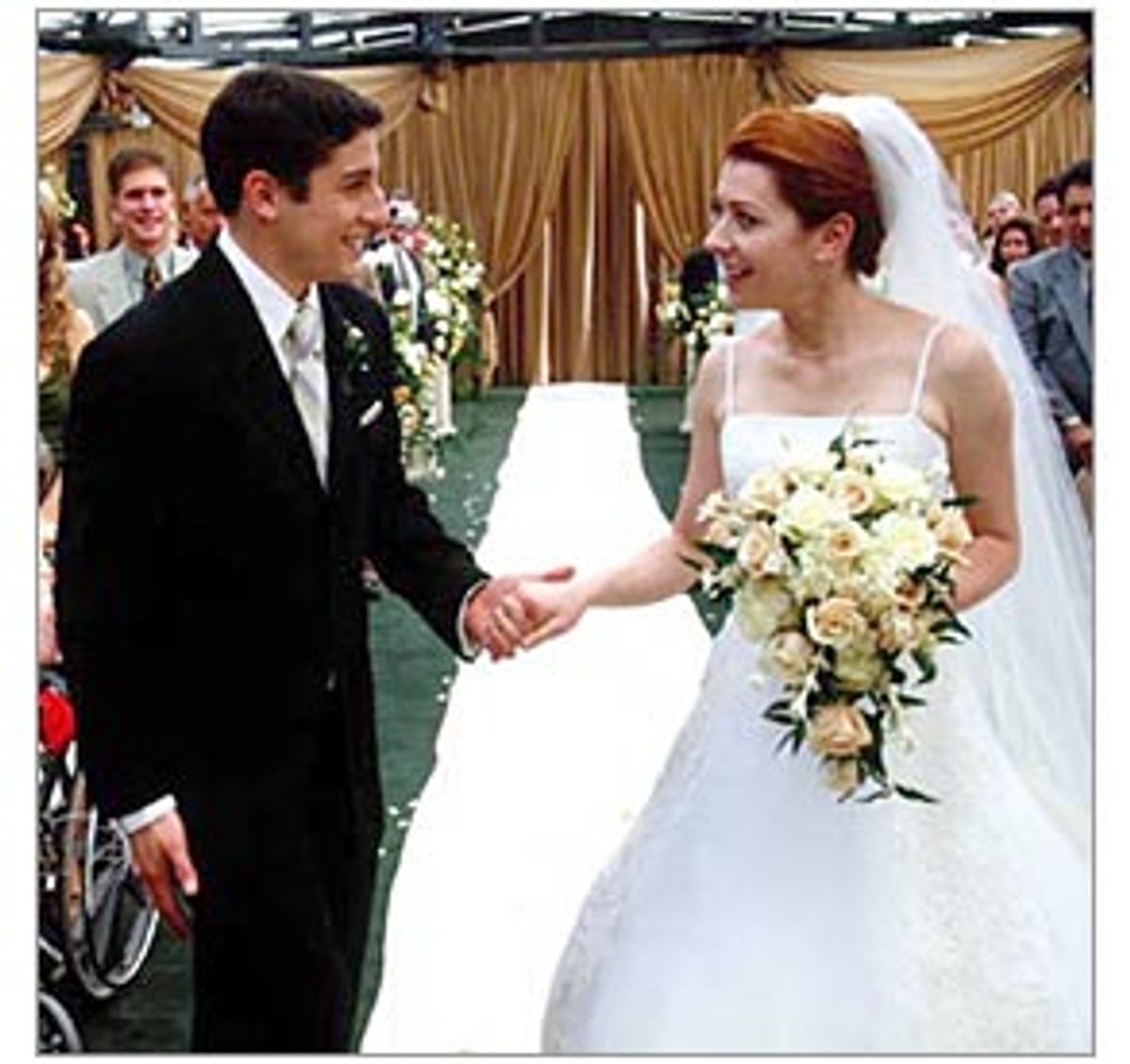 All those Sunday newspaper features to the contrary -- the ones with headlines like "Attack of the Summer Sequels" and so forth -- sequels aren't inherently bad. Sometimes a II actually improves on a I: "Bill and Ted's Bogus Journey" is much more enjoyable than "Excellent Adventure." And as much as I love "Babe," I confess a strong preference for "Babe 2: Pig in the City."

But if there was ever a case of Hollywood's over-stroking a formula to squeeze every last drop out of it, "American Wedding" is it. The first movie in the franchise, Paul and Chris Weitz's "American Pie," was a surprise hit for some not-so-surprising reasons: The movie posited itself as an unapologetically raunchy sex comedy, but it was also astonishingly intelligent, sensitive and sweet in its approach toward teenage sexuality, particularly that of young women. "American Pie II," which reunited nearly the whole gang from the first movie, including Jason Biggs' shambling but sexy Jim and Alyson Hannigan's randy band-camp nerd Michelle, felt forced and strained, and whatever sweetness it had felt glued-on after the fact.

But for sheer ineptitude, crassness and unwatchability, "American Wedding" takes the cake, and you don't even want to know what it does with it. Hannigan and Biggs are back, and at first it's a pleasure just to see their faces -- to anyone who loved the first movie, these characters are like old friends, and the actors seem to be struggling to do the best they can with the material. But Jim and Michelle are almost immediately swallowed up by the movie's hyperkinetic swirl of gags; before long, they cease to seem like people at all. Jim and Michelle have just graduated from college and, for ungodly reasons that are never explained, they've decided that the next step is to get married. Their friends Kevin (Thomas Ian Nicholas) and Finch (Eddie Kaye Thomas) are reasonably supportive, but everyone is trying to keep the whole affair a secret from Steve Stifler (Seann William Scott). The movie gets one thing right: Stifler is the sort of guy whose adolescent antics are fun when you're a teenager or college kid, but they don't transfer well to the adult world. Jim and Michelle have had enough of him, and they don't want him spoiling their big day.

Which of course means that he almost does, first by crashing their engagement party, in which there's a big hardee-har-har involving his crotch, the party cake, two dogs and his buddy Jim, as Jim's straitlaced WASPy in-laws-to-be (played by Deborah Rush and Fred Willard, who have disappointingly little to do) look on in horror. Later, the boys end up in a gay bar, where the ever-smirking Stifler first alienates, then befriends, the clientele. (The "straight guys in a gay world" routine isn't handled as offensively as it might have been, but the setup is remarkably unfunny.) Later still, Stifler poses as a well-mannered prepster (the lavender sweater tied around his shoulders is, admittedly, a nice touch) in order to bed Michelle's foxy-innocent sister Cadence (January Jones). And even later, he ends up eating dog poop out of a ruffled paper cup -- it's all in a day's work for the Stifmeister.

The movie's jokes pile up, but they never add up: The script is by Adam Herz, who worked as a writer on the first two "American Pie" movies. But while "American Pie II" was just lackluster, "American Wedding" is stultifying. The scenarios become increasingly outrageous until they're simply exhausting. Director Jesse Dylan ("How High") has no knack whatsoever for guiding actors or capturing the exchanges between them in a way that makes any sense: The actors all feel detached from one another, and there's a desperate lassitude about their performances, as if they're trying very hard to recapture some of the old magic and yet, deep in their hearts, know that they can't be bothered to care.

Eugene Levy returns as Jim's dad, Mr. Levenstein, dispensing more awkward but loving sex advice to the young 'uns. Levy is as charming as ever, but the role feels patched into the movie -- then again, if he weren't there, it would have no heart at all. And Fred Willard, whose zonked-out genius was dazzling in both "Best in Show" and "A Mighty Wind," gets one funny line. At the pre-wedding festivities, he does his damnedest to prove that he's glad to be joining the Levenstein clan, proclaiming, "Here's hoping we can sit many happy shivas together." And if you're sensitive to spoilers, please read no further, but I must note that the always-wonderful Jennifer Coolidge (also known as Stifler's mom) makes a cameo toward the end -- her small but nicely played scene with Eddie Kaye Thomas is one reason not to walk out early.

But nearly everything else about "American Wedding" is overcooked and sloppy. As the movie hurtles toward its windup, Michelle flings an accusation at Stifler, who has carelessly turned up the heat on the wedding flowers, frying them to bits: "You don't care about this wedding or anyone in it." He's not the only one.