Queer eye for the queer mom

What can Bravo's hit makeover show do for a straight man who already drinks Gewurztraminer -- or his lesbian mother who worships "The Nanny"? 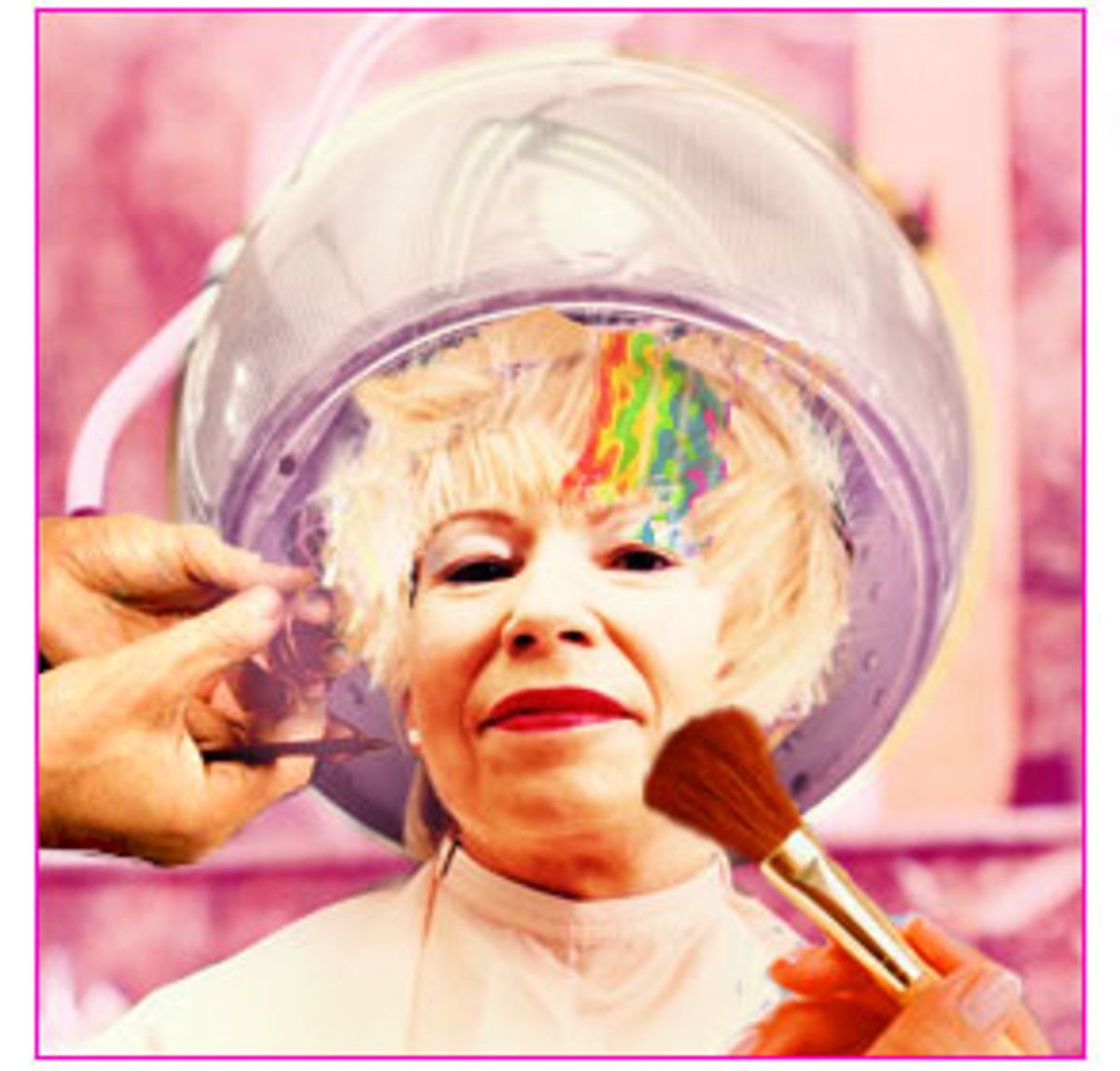 When the scientists at the National Institutes of Health finally discover the elusive "gay gene," they're sure to find it intimately entwined into a double helix with the chromosomes that predispose proper coordination of accessories. At least that's what TV would have us believe. This month's case in point: Bravo's overnight smash, "Queer Eye for the Straight Guy" -- the makeover show in which a team of five quip-spouting gay men take some poor hetero schlub and transform him into a beacon of style, taste and savoir faire that would make Rupert Everett jealous.

The show's makeover artists, or the "Fab Five" as they call themselves, are performing an invaluable service to heterosexual America. I, unfortunately, will never be one of their straight-to-great success stories; too many people assume I'm gay already. I own shiny shirts; I cry at chick flicks; I have a favorite kind of goat cheese. Besides, the number of Kiehl's products in my bathroom cabinet would disqualify me immediately.

My mother, however, a bona fide gay woman, is in serious need of some lesbian lessons, because she's just not doing it right. Her remember-the-'80s hair, so-long-they-look-fake fingernails, and puppy-appliqué sweatshirts are all wrong. The Fab Five may be inspiring legions of straight folks to new heights of fabulousness, but what about a woman who's already "one of them" and doesn't seem to get it at all? Where is the show for her? Where is "Dykes for Dummies"? She needs some kind of help, because in just about every possible way, despite my attraction to the opposite sex, I'm far more gay than she is.

Throughout my life, people have been secretly -- or in some cases, not so secretly -- expecting me to come out. I think even my Roman Catholic grandparents were a bit surprised when I actually married a woman. And it's not just the uninitiated who'll make the mistake; I can't walk down the street in Chelsea without setting off gaydar left and right. Sometimes I wonder if my wife gets tired of the sympathetic head shake she gets from male couples who see us at restaurants, the one that always comes with the unspoken intonation of "oh, that poor deluded woman." After we first met, it actually took my wife herself several weeks to come to the conclusion that I liked girls.

Is it all because I tucked in my shirts?

Whatever the reason, there's no drama in having one of the "Queer Eye" makeover artists open my closet and say, "Wow, everything's organized!" Or having their food and wine connoisseur say, "We need to spice up your menu," and having me respond with, "OK, should we use my Thai basil marinade or my chipotle-lime salsa."

My mother, however, would be a different story altogether. The "Queer Eye" crew would probably shudder at her obsession with reruns of "Home Improvement" and "Full House," or her nonironic love for Dollywood. I have no idea where her status as a screaming, middle-aged Backstreet Boy fan fits in. ("Brian smiled at me!" she gushed after seeing the Boys in concert in 2000.) She doesn't even worship the correct icons; to her, Marlene Dietrich is a gnat on the ass of the all-powerful god that is Fran Drescher.

Although, admittedly, my mother did run off to buy a Melissa Etheridge CD a week after coming out to me, sometimes I think she has the rainbow flag sticker on the bumper of her car just to remind herself that she's gay.

Television has spelled out homosexuality pretty neatly for us. Basically, there are two types of gay men: the sassy, snappy, ultratrendy ones (Jack from "Will and Grace") and the ones just like that, only a bit more repressed (Will from "Will and Grace"). And there are apparently three types of lesbians: the Bart Simpson-haired, the patchouli-scented, and the power-suited. Any of the above would have seemed a more natural fit for me, parentwise. Instead, I got Pinky from "Grease."

There has always been an innate cultural difference between me and the rest of my family that made me feel like something of an outsider among them. And it started long before I majored in theater and spelled it "theatre." My mom was a teenage parent from an old-school, red-sauce Italian family in Queens, N.Y. College wasn't an option for her; only daytime TV and coffee klatches with the landlady. She wasn't the one who seemed out of place in her environment, I was.

That's why when my mom came out to me almost a decade ago, I secretly hoped she was going to suddenly change and become a bit more like me. Some naive part of me half-expected that after announcing her lesbianism, she would envelop herself in some sort of magical gay chrysalis, only to burst out a few days later with a pixie haircut and a bottle of Chilean merlot. Or at least a chain wallet and membership passes to Gold's Gym.

But nearly 10 years later, she still drinks Natural Light beer, douses herself in off-brand body sprays, and limits her definition of "ethnic cuisine" to sweet and sour chicken. And she still often seems somewhat perplexed by her son who buys organic produce, regularly gets things dry-cleaned, and shows no fear in the face of subtitles. The only difference is that now she happens to live with another woman.

Somehow, being gay didn't make my mother a different person -- an outcome that I at first found not only disappointing, but perplexing as well. Even Rosie O'Donnell, immediately after coming out, showed up on magazine covers sporting Official Lesbian Haircut No. 8. Years went by and I eagerly waited for my gay mom to appear. I was ready to go on pride marches with her, to head off for weekends in Provincetown, Mass. Sadly, the gayest thing we've yet done together is watch an episode of "Frasier."

My mother might have changed her sexual preference, but she wasn't "gay" -- at least not in the way I understood the word. Gay people didn't serve Hamburger Helper unless they were hosting a theme party.

When all was said and done, I was still the odd man out in my family, still the "strange" one because I choose to grind my own coffee and alphabetize my CDs. My younger brother has found himself woven into our mother's life to a far greater extent than I have. This is a man who braids his beard, wears profanity-laced T-shirts, and uses cross-country buses as his preferred mode of transportation. Our mother may not do those things herself, but she gets that, she can understand that. She cannot understand choosing an art-house documentary over anything starring David Spade.

So could the "Queer Eye" Fab Five turn her around? Could they burst into her rural Carolina mountain home, toss around a few mod lamps with silver-tipped light bulbs, layer her in designer pantsuits, and force-feed her fois gras, thereby transforming her into the kind of Proper Lesbian who could be seen dating Ross's ex-wife on "Friends"? Or what if there really were some group of roving makeover lesbians? Could they stop by my mother's house, hang up some Audre Lorde sayings, throw away her razors, and make her start baking macrobiotic blondies? When we're talking about a woman whose idea of being label-conscious means looking for the "As Seen on TV" sticker, I doubt it.

In the end, though, it's probably all for the better, because I'm sure I would end up horribly missing the mom who weeps over each new addition to her collection of Franklin Mint doggie figurines. Her earnestness is something I've always found incredibly endearing.

I'd never actually wanted a different mother; I'd just been excited about the fact that mine was entering into a subculture that I felt more comfortable in, regardless of my own straightness. Accepting my mother's sexual preference was never a problem. The fact that the stubborn woman simply refused to conform to a media-driven stereotype was. I hoped that being gay could, for her, shed new light on who I am.

Not that I'm a perfect metrosexual by any means. I'm no stranger to the Gap and many a day goes by where, out of pure laziness, I don't bother to shave. ("Queer Eye's" resident grooming guru would have me flayed.) And during the premiere episode of "Queer Eye," when one of the Fab Five sighed and commented about "straight boys and their games" after spotting their makeover subject's PlayStation 2, I grew a little red-faced thinking about the fact that I had a PS2 sitting right below our TV. And an Xbox. And a GameCube.

But it's important to me to be able to come home from a pleasant pan-Latino brunch and play a few rounds of Dead or Alive Extreme Beach Volleyball. So when it dawned on me that I was sitting there worrying about not being gay enough, I had to laugh. I picked up the phone and called my mother, who was predictably horrified when I informed her that our 18-month-old daughter absolutely loved paprika-dusted hummus and vanilla soy milk. Being as gay-centric as I am, I'm just catty enough to enjoy that.