Paul Giamatti talks about his breakout performance playing Harvey Pekar in the much hyped "American Splendor" and about portraying schmucks in movies like "Big Momma's House." 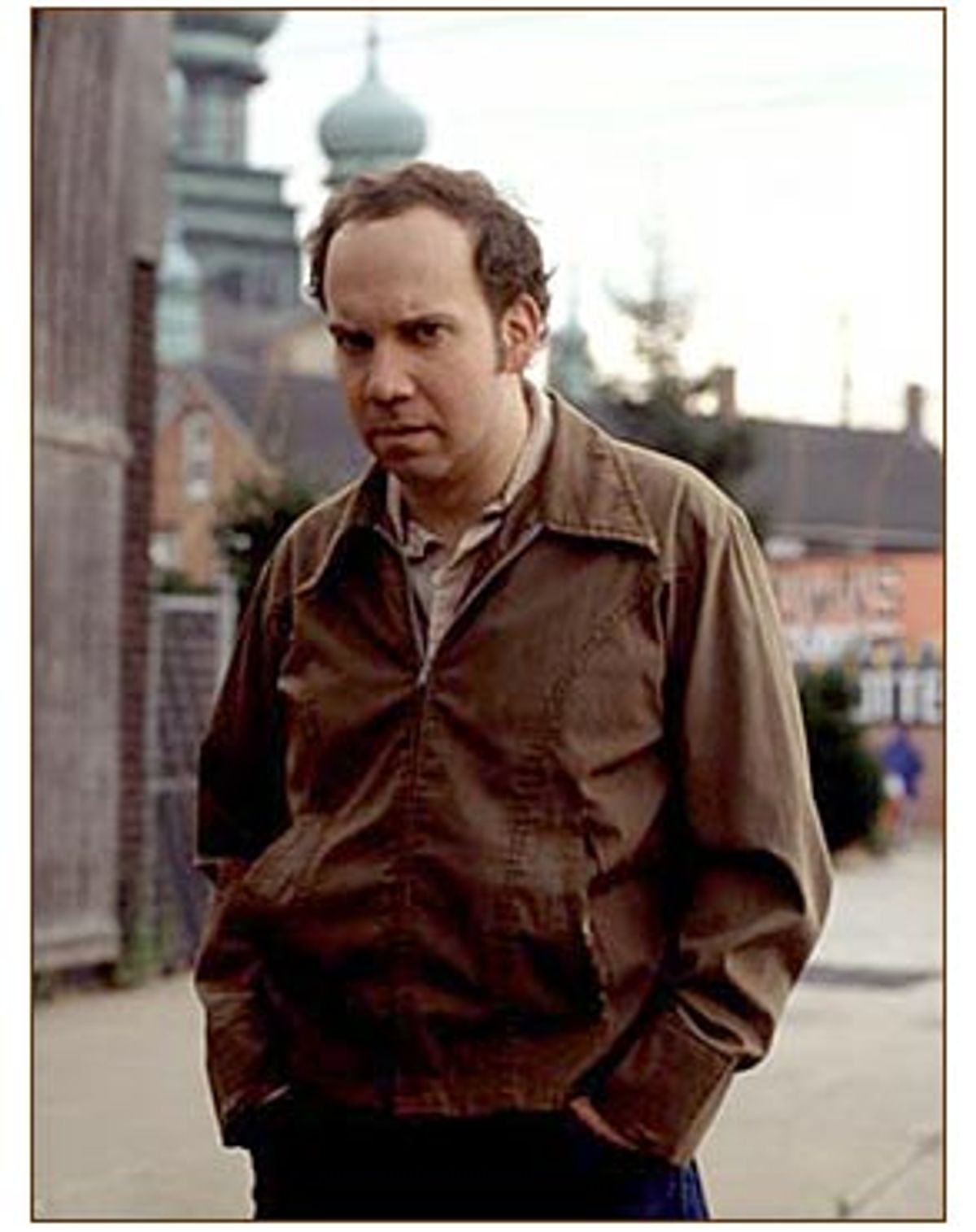 Paul Giamatti has fashioned a career out of being humbled and humiliated, giving oddball life to an assortment of schmucks, nebbishes and clowns.

In "Private Parts" he appeared opposite Howard Stern as a much maligned radio exec nicknamed "Pig Vomit." In the Martin Lawrence vehicle "Big Momma's House," he was an undercover cop chastened by snarling pooches and Bundt-bearing Southern matrons. And in "Big Fat Liar" he played a shady movie producer pummeled into submission by vengeful, sitcom-cute tweenyboppers.

He's so adept at playing losers that his lofty pedigree might surprise his audiences; his late father, A. Bartlett Giamatti, was an esteemed scholar who taught Italian, English and comparative literature at Princeton and Yale. Bart Giamatti became the youngest president ever of Yale and went on to serve as commissioner of baseball (he died in 1989 just days after banning Pete Rose from the sport).

Paul Giamatti, 36 and also a Yale man, first drew notice as a stage actor, garnering accolades for his work in productions of "The Iceman Cometh," "The Resistible Rise of Arturo Ui," "Three Sisters" and "Arcadia."

On-screen he hasn't fared quite so well. Until recently, Giamatti seemed doomed to permanent what's-his-name status. He's had big parts in bad movies, small parts in big ones ("Saving Private Ryan," "Man on the Moon," "The Truman Show"). But in the last couple of years, he has slowly emerged in bigger, better roles -- most notably in 2001, when he starred as hapless documentary filmmaker Toby Oxman in the Todd Solondz film "Storytelling."

Now Giamatti's career-making role comes in the biopic "American Splendor," which opens in limited release this month. The winner of the Grand Jury Prize at the Sundance Film Festival, the film chronicles the life and times of V.A. hospital file clerk Harvey Pekar. Unable to draw even a stick figure, Pekar nonetheless launched a comic book series -- the autobiographical "American Splendor" -- in 1976, enlisting Robert Crumb and other artists to illustrate his work. Giamatti stars as the persnickety Pekar opposite Hope Davis as Pekar's wife, Joyce. Appearances by the real-life Harvey Pekar and a 2-D animated Harvey punctuate the main narrative.

Directed by Shari Springer Berman and Robert Pulcini, "American Splendor" marks the first time Giamatti has had to carry a film -- which he does with a nervy and risk-taking performance.

Salon spoke to Giamatti by telephone:

Sure. He was kind of a theatrical guy himself. My brother was an actor and my mother's an actress, and my father was very much into the arts. He died before I ever started acting and I'm sure he would have wanted me to know what I was getting into, but he would have been all for it.

You're generally described as a character actor. Is that a label you would choose for yourself?

I'm not exactly sure what it means, but sure. I think people regard me as quirky; they don't see me as a leading man.

Could you talk about the challenges of playing a "real" person in "American Splendor"? Did you feel any pressure to be "authentic," or did you approach Harvey Pekar as you would any other character?

When I met with the directors, they said, "We're pretty sure we want Harvey in the movie, so we're thinking we want to cast someone who can be as much like Harvey as possible." There was a certain amount of pressure and challenge involved because I'd never done that kind of thing before, specifically been told, "We want you to be like this guy." On the other hand, what you're seeing in most biopics is a character based on a person; it's always ultimately a fictional character. I've played real people a bunch of times and have finally reached the point where I realize that you do have a lot of room for interpretation with these roles and you can confine yourself too much if you forget that you're playing a character.

Did you and Harvey talk much during the filmmaking process?

I met him a couple of days before filming began and he's a really nice guy. We didn't hang out a whole lot but we did talk; he's a chatterer. He seemed to get a big kick out of the whole process, and he was remarkably relaxed with the idea of someone else telling his story.

You've said you're playing the "comic book version" of Harvey. Could you talk about the challenges of conveying a persona that feels at once larger than life and credible?

Someone else told me I said that and I'm like, "I said that?" I don't know what I meant by that. Harvey created a persona in his work and I'm taking on the character he already created. You're right that comics are slightly larger than life, and Harvey is certainly larger than life, so as an actor I felt permitted to go in that direction, because Harvey slips in and out of a persona himself. He's got kind of a shtick. He's a bit of an actor and performer. He knows when to turn on the character. He's a heightened guy to begin with, just sort of physically strange and a little unreal.

I'm not the most subtle actor in the world, I like to play things a little heightened, so this all felt comfortable for me.

The directors have described Harvey as a hero. Would you?

He's a heroic figure in the sense that anybody who can get out of bed in the morning without putting a bullet in their head is a heroic figure. There's heroic effort being made just to put up with everything. What's heroic about this guy is that he doesn't just sink into this morass; he makes something out of it. He's a really smart guy. The funny thing to me is that people always describe him as an Everyman. He is but he's not. He's very eccentric, an odd guy. It shows that there's no such thing as ordinary.

You and Hope Davis have such a strong connection in this film. Could you talk about your collaboration on this project?

Frankly, I think she makes the movie. We didn't have a heck of a lot of time to work on the film, we didn't rehearse it, but Hope picked up her character really quickly. She and I talked about how we wanted to make this film as completely unsentimental and unromantic as possible.

Hope met with Joyce once before filming, and she said Joyce told her that she and Harvey really did get married after knowing each other just two days. The feeling Joyce had when she met Harvey was "He liked what I was selling and I liked what he was selling." Hope wanted to convey this feeling in the film, this image of two people who are way past anything else but the notion of "I like what he's selling, I like what she's selling." There is that matter-of-factness to both of them. I thought this was a great detail to bring to the film; without it I might have had the tendency to overact.

You've appeared in such a broad range of work  everything from "Planet of the Apes" to "The Iceman Cometh." Do you invest more of yourself when you're working on "serious" projects like "American Splendor" as opposed to something like "Big Momma's House"?

I have to tell you that "Big Momma" took it out of me. Movies like that present their own set of challenges. I appear in comedies a lot, but I don't feel I actually have the greatest comedic skills in the world. I don't think I should only be playing King Lear but I think there are some people with that extraordinary ability to hit the laugh every time. I just don't have that. "Big Momma" was purely about getting laughs through physical comedy, and I wanted to see if I could do that, because it's not something I feel very comfortable doing. I think I'm pretty terrible at it. A lot of things were very tough about that movie. Sometimes the films that appear to be the most lowbrow choices end up being the most difficult.

When "Storytelling" came out, Todd Solondz told Salon that he despises directing. He described the production process as "assaultive and nightmarish and horrible" and said the only reason he directs is because he doesn't want anyone else directing his scripts. Could you talk a bit about his general approach on the "Storytelling" set?

He said that? That surprises me. His scripts are tricky because they're written in a very specific voice and style. They're not easy to get a hold of. He really wants you to stick to it, which I like, this sense that the script was written exactly as he intended the actors to read it. He's an incredibly warm and pleasant presence on the set, but I guess he's miserable. I didn't know that. He's really a perfectionist; he does lots of takes and really lets you work.

Could you discuss your role in the upcoming John Waters film?

It's a really funny script, but I'm not sure I'm going to be able to do it. I might have a scheduling conflict. It's about people who get concussions and develop these specific sex fetishes, so you have characters wearing diapers, humping trees, stuff like that. It's like one of the old John Waters films. It's insane.