No bitches, no hos

The hyper-literate women of New York-based hip-hop trio Northern State represent for the sisterhood. Just don't ask them about Fannypack. 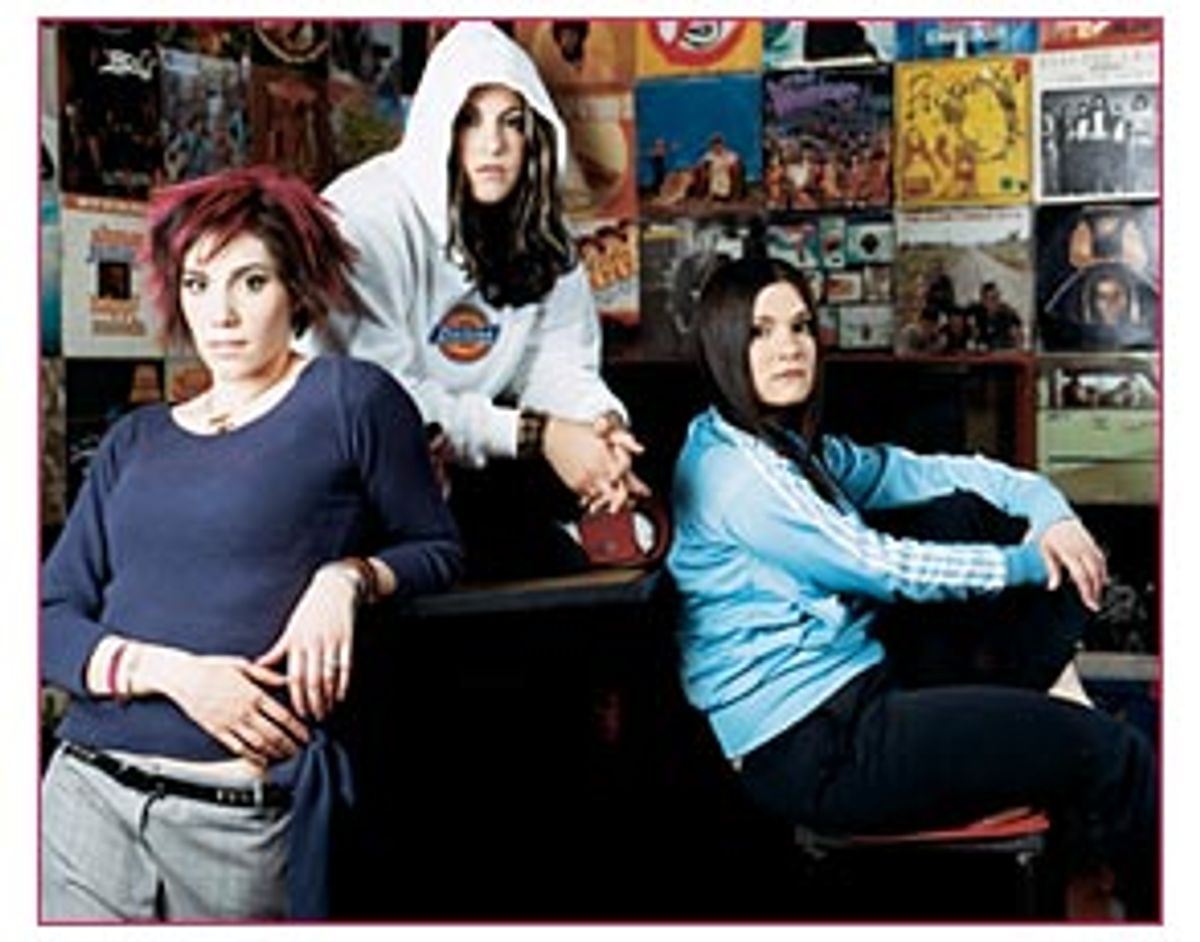 Talk about sisterly. The members of the all-woman hip-hop trio Northern State are so closely girl-bonded that they dream about each other's female mentors. "I totally meant to tell you, I had an HRC dream about you," says Coreene Spero ("Spero") to Julie "Hesta Prynn" Goodman, referring to Prynn's once-employer and still-idol, Hillary Rodham Clinton.

I'm at a diner in Chelsea with Spero, Prynn, and the third member, Robyn "DJ Sprout" Goodmark, 27. Having seen Northern State perform a week before at the Coney Island Siren Festival, I was a little intimidated before we met. I mean, these girls can bust a rhyme in blistering heat, whereas I can Lindy.

But the minute they show up, we totally girl out -- French manicures are evaluated, my orange mules are admired, boyfriends and peeing are discussed -- and everything is all right. By saying that, I'm not trying to out Northern State as prisses by day, posers by night; on the contrary. I'm saying these ladies are the real deal: cool girl-geek feminists who talk about politics and clothes in the same breath ("keep choice legal, your wardrobe regal"), who rhyme the word "chest" with "palimpsest." They write their own rhymes, complete with props to Parker and Plath (plus hip, kitschy nods to Nigella Lawson, Kavalier & Clay, Dawson's Creek, and Professor Plum "with a candlestick in the conservatory"). They don't "speak jive." They don't hide or deride their upbringing as Fresh Princesses of Dix Hills, a Long Island town with a median household income of over $100K ("I'm more European than an English muffin").

Bottom line, Northern State is neither a Beastie-Betties novelty act, nor a one-note campaign to prove that white girls can rap (the kind of venture that usually proves the opposite).

"We believe wholeheartedly that we are part of the women's movement, and we're just trying to put ourselves out there in a way that is inspring to young women," says Sprout.

It's noon, but Prynn and Sprout are still on breakfast, ordering eggs with dry toast and hash browns, well done. Spero advances to lunch, ordering chicken salad after a group discussion of what foods would and would not be "gross at a diner." Prynn and Sprout met in grade school; Spero (formerly "Guinea Love") joined the posse-to-be sophomore year. A brunette with blond streaks, wearing a cargo skirt and a football shirt; she ran in to the restaurant scribbling rhymes in a notebook (which is just what I'd hoped someone would do). She's always been a "hardcore feminist," she says, recalling a high school social studies debate in which she argued the merits of women's rights against a classmate who failed to see what the fuss was about. "She was like, 'Just do your best and everything will work out,'" says Spero. Her opponent apparently went on to drop from a size 10 to a size 2 in one semester and garner the yearbook superlative "Best Body." "She was so hungry she didn't know what she was talking about," says Prynn. "Eat a cracker and get a clue!" says Spero.

Prynn, back then, was voted "Most Likely to Save the World." She's still doing what she can, hoping that the band will be invited to play at "HRC's" inaguration ("We're coming out of retirement, ladies!") and performing random acts of kindness to smitten Smith College groupies: "I told them they could stay at my house -- with me and my husband," she says. Prynn's the one Parker Posey would play in the Northern State movie: lean and long-fingered with a thrift-shop skirt and a bonus cleft in her chin. Her feminist "click" came while watching her mom not leave her dad because she couldn't afford a lawyer on her own; Reviving Ophelia also helped. "I remember asking a lot of questions in Social Studies and not really being satisfied with the answers," she says.

Sprout, with long brown hair and camo-green pockety pants, looks like your favorite camp counselor. She figured out feminism when she finally got that her mom's choice to stay at home totally counted as "work." "I finally realized that obviously, it's about choice and finding out what's best for you and not letting obstacles stand in your way," she says.

They studied music and dance, enjoyed the rap and hip-hop du jour, were politically active in college, came back to New York, pursued careers in music engineering, acting, and teaching. Their "let's make a band" moment came one night in Julie's Brooklyn basement. On what you might call a serious whim, they decided to go off and write rhymes separately and meet back the following week to work on them together. "It was like a book club," laughs Sprout. (Sample early work: "I'm Hesta Prynn / let me begin / I like my coffee with lots of gin / you can always tell what kind of mood I'm in / 'cause I let it out / take it, DJ Sprout!")

They kept at it until, after a house party "audition" three years ago, they found themselves opening for a friend's band at Luna Lounge on Manhattan's Lower East Side. Their sold-out show got them more gigs, and they soon reached coveted quit-their-day-jobs status.

Neither sexism nor white-girls-can't-rap-ism has been a big problem for them, they say. "The people that we work with believe in us already, so it doesn't come up with them," says Sprout. "Otherwise, people are gonna say or think whatever they're gonna say or think before they hear us, but we've been able to win people over once they listen to us and especially when they see us live."

The misogyny that really bums them out, not surprisingly, is that of rap of the "bitches and hos" school. "Sexism is ill, and that's not creative, it's boring," says Prynn. Adds Sprout: "Even if you hear a track you think is slamming and you feel and and want to listen to it, but it's all about bitches and hos, that's damaging. I used to listen to that stuff when I was like nine and sing along to NWA -- at camp, we were like, 'Somebody say hey, we want some pussy!' The music sounds good, you're dancing, you're singing, but it definitely affects your perception of self, your self-confidence, your understand of how relationships should be."

But ask them about Fannypack -- the pre-fab Brooklyn girl group with the flash-in-the-pants hit of the summer, "Cameltoe" -- and all of a sudden they're not so sisterly. Well, at first they try. They really, really try. "At this point a lot of people are gonna realize that there's a gap in hip-hop that could be filled by females, and white females, and the question is how are people gonna go about filling that gap. They could be coming from different angles, and I would say that their camp is coming from a different angle," says Spero.

Prynn pipes up. "I would say -- fuck it, I would say I think it's wack to have boys write your rhymes and all your music and then put on hot pants and show your ass in New York magazine. Yeah, that's wack."

For Northern State, the sheer act of doing what they're doing, doing it themselves, and doing it well -- "we're perfectionists" is the consensus -- speaks for itself. "For us, that's activism," says Prynn.

Hmmm. Kinda sounds like, "Do your best and everything will work out." Maybe -- hopefully -- Miss Best Body at Dix Hills High was really just ahead of her time.