When my friends ask me for help with their personal ads, I edit them the way I do writers at my magazine, with a firm but gentle hand. 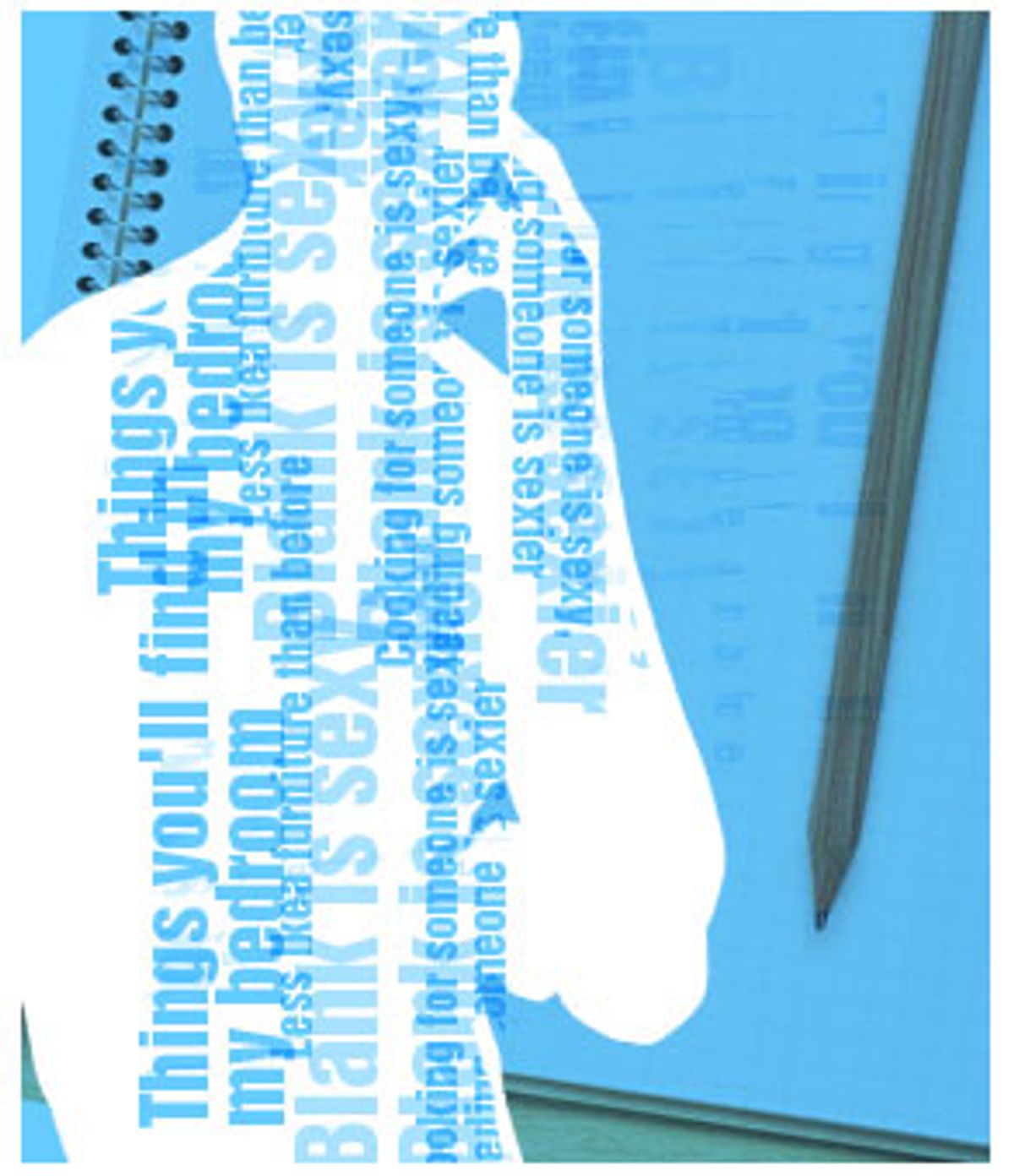 As an editor by trade, I get the odd request to look over a fellowship application, a vituperative letter to AOL Time Warner cable customer service, a story pitch/TV proposal/film treatment. But lately, friends have also been asking me to edit their online personal profiles. It can't be my own dating résumé that qualifies me for such a job, but the directives are fairly straightforward: Don't tell anyone I'm doing this, and do make me sound like I don't suck.

My ambivalence toward Internet-abetted dating turned to opposition when a friend wanted to set me up with a co-worker, who had his own profile posted on Nerve.com. I qualified for a mortgage more easily than satisfying the preferences of this fellow, who listed an atheistic/agnostic/Buddhist, Caucasian/Latina/Middle Easterner, with a graduate degree, at least 5-foot-2, as his ideal (me: none of the above). Who wants to go on a date already handicapped? Still, I understand the limitations of a screen's worth of one's wants and desires. In the spirit of "those who can, do; those who can't, teach," I do my best to help my friends, though perhaps they should know that my favorite personal ad, from a local Seattle newspaper, described what a date could come to expect as "stony stares, long silences and blunt objects."

As with all writers, my friends want me to help them present their best selves. As with any editor, I try to do so without leaving footprints. I don't always succeed. Sometimes I make them sound like someone I'd want to date. (Or try editing the profile of someone you have a crush on -- I almost want to make them sound bad. On the other hand, I now have good intel.) But a career editing fussy writers serves me well with this job. The general rule I use as a magazine editor -- be firm, but gentle -- applies to personal-ad editing as well. As with some writers, my friends get defensive ("You're basically saying it sucks") or lazy ("Fine. You write it"). When one friend described her favorite on-screen sex scene as "the one with Jude Law as a Russian officer," I told her to do some reporting, and sent her to IMDB.com to get the title ("Enemy at the Gates"). As with magazine editing, you part cheerlead, part ask for more, part ignore their protests and insist they trust you. And, of course, always let them think they've come up with the final product themselves.

Editing is subjective. One editor's treasure is another's trash. Under the "Five things I can't live without" section I can't delete intangibles like "laughter" and "the ability to dream" fast enough. Or, under "Things you'll find in my bedroom," "bare walls," "piles of paper" and "free stuff I get from work" says little. "Less Ikea furniture than before," tells me more (you're creative and upwardly mobile). I encourage them to be inventive (without inventing), as every answer might be the difference between someone hitting "reply to profile" and logging off.

Sometimes they're their own best editors: Wanting someone "who can use the word 'eschew'" or "name the members of the Supreme Court" are details I couldn't come up with for them. Though I wish all profiles would banish the section, "Blank is sexy, Blank is sexier." For that one, my friends and I usually come to an agreement after a debate as confrontational and exhausting as a Thai massage. One male friend wrote, "Intelligence is sexy, sincerity is sexier," which I thought I had read before in the New York magazine personals. Instead, I suggested changing "sincerity" to "curiosity" -- he wouldn't really want to go out with someone who was too sincere, anyway. He hated that, as well as "Watching sports with me is sexy, discussing sports with me is sexier." (He didn't want to come off as the ESPN "SportsCenter" freak that he is.) After too many more potential scenarios, he finally agreed to the Nigella Lawson-inspired "cooking for someone is sexy, feeding someone is sexier."

Now that I've been doing this for a while, I've started to feel responsible for the outcomes: It will be my fault if a profile doesn't thwart a Friday night flipping between the History Channel and the Food Network. But the pleasant byproduct is learning more about my friends and how they view themselves. What surprises me is that, perhaps in some exercise in modesty, they don't write about the things that make them shine, at least to me. I ended up telling one friend in an IM exchange all the traits I found appealing, ones I thought he ought to consider mentioning.

"You are equally as comfortable at the theater as in a pool hall, as happy dining on foie gras as scarfing In-N-Out burgers."

"You can talk to anyone in a room, whether they're a film director, sports barfly or wanderlust-bitten nomad."

And you're such a nice guy. Why aren't we dating? He didn't use any of my lines (I checked), but we understand each other a little better. I've also learned about my friends in regard to what they're looking for, what's important to them, what floats their boat. I thought I knew. Or assumed. Or never bothered to ask. One friend won't date a vegetarian (points for him). Another friend is willing to wait if his partner doesn't want to have sex until marriage. Who knew? I am impressed by their candor, their openness to risk, their willingness to be vulnerable. After all, my name or photo appears nowhere; editors work behind the scenes.

Whether or not the steak dinners they've scored (and one blow job, after a first-date brunch -- brunch!) are in some way attributable to my edits, in the end I think they just want to be told it's OK, it's great, you're OK, you're great. Don't change a thing. I love your profile. Don't change. You will be loved.

Juliet Gabriel is a pseudonym for a magazine editor and writer living in New York City.