He's a pornographer and First Amendment fighter, a zealot in the war on hypocrisy. Now that he's running for California governor, he says a certain movie star should be very, very nervous. 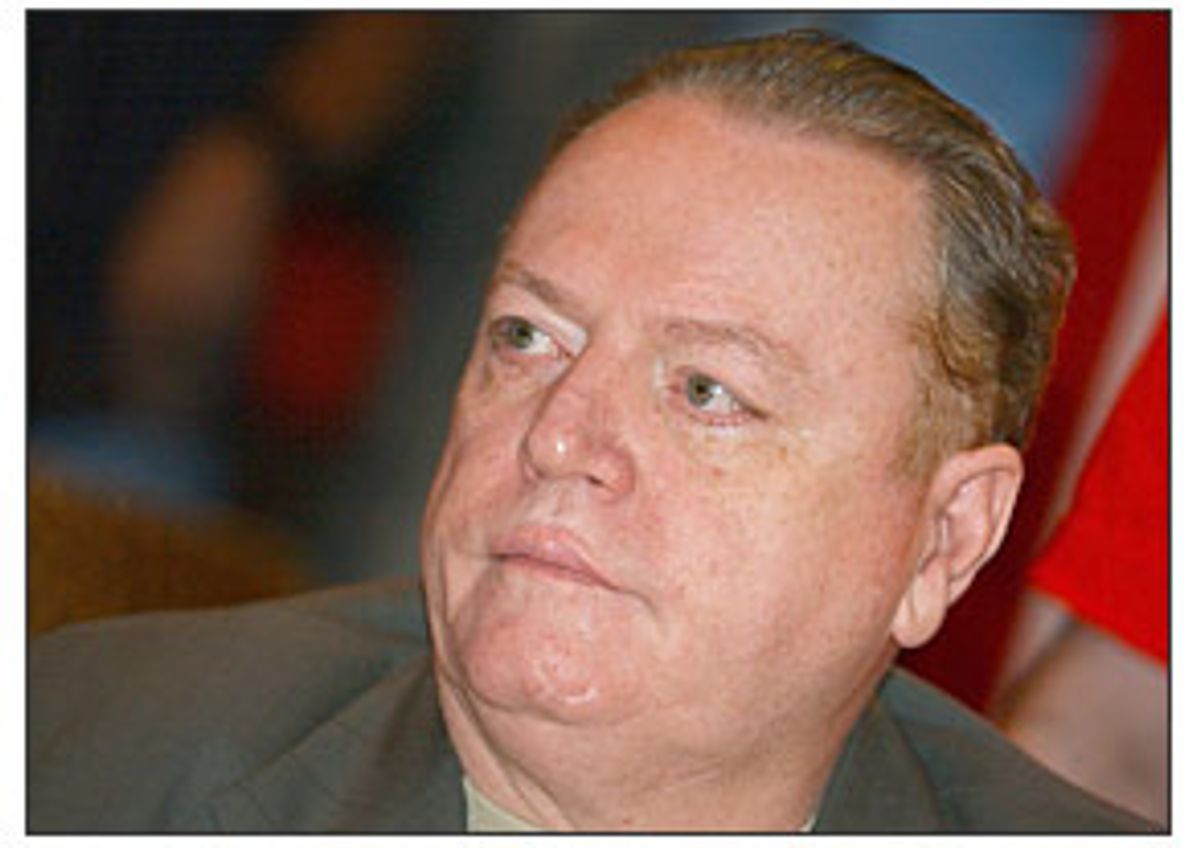 Reprising the slogan from his brief 1983 presidential campaign, multimillionaire Flynt calls himself a "smut peddler who cares," and says he's the only one in the race with a plan to fix California's record deficit. That deficit is the most tangible reason Gov. Gray Davis is being recalled -- the state, even after the universally loathed budget that Davis signed on August 3, is still $8 billion in the red. The solution, says Flynt, is simple -- he'd legalize slot machines in private casinos and tax the proceeds at 30 percent, which he says will raise $3 billion a year. He's also nearly alone among high-profile candidates in taking on the politically volatile issue of illegal immigration.

None of this means the 61-year-old Democrat has much of a shot at winning the Oct. 7 election, in which Republican Schwarzenegger is the front-runner, followed by Lt. Gov. Cruz Bustamante, a Democrat. But Flynt has commissioned pollsters to study his chances, and if they find that he can possibly get 10 percent of the vote -- in some scenarios, enough to win a race with 135 candidates -- he's ready to throw himself and his considerable resources into the campaign.

On one level, the fact that a man whose holdings include the magazine Barely Legal soberly disdains his frivolous competitors signals just how surreal the recall has become. Even weirder is that Flynt hints he'll attack Schwarzenegger on his personal life. Schwarzenegger, after all, might be dogged by his past steroid use and by accusations of groping and sexual harassment, but Flynt, who's on his fifth wife, is the man who published a Hustler cover with a naked woman being fed into a meat grinder.

Yet in his own way, Flynt has had as enduring an engagement in American politics as some of the race's political pros. His First Amendment battles, culminating in a 1988 Supreme Court victory against preacher Jerry Falwell, were immortalized in Milos Forman's 1996 biopic "The People Versus Larry Flynt." In 1984, in the best journalistic tradition, he refused a court order to disclose who gave him an embarrassing FBI surveillance tape of undercover agents engaged in a high-profile cocaine sting. Somewhat less traditionally, he wore an American-flag diaper to court and was thrown into a federal prison.

During Bill Clinton's 1998 impeachment, he offered a million dollars for information about Republican sexual improprieties. His investigation led to the resignation of incoming House Speaker Bob Livingston and to the release of an affidavit by the ex-wife of Rep. Bob Barr saying that Barr, a staunchly antiabortion Clinton foe, consented to her 1993 abortion and even paid for it. A Washington Post poll at the time showed that Flynt was one of the most popular figures to emerge from the whole impeachment imbroglio.

Of course, not all Flynt's forays into politics have come with high-minded ideological justifications. In 1974 Hustler published naked paparazzi shots of Jacqueline Kennedy Onassis, and Flynt has offered $10 million for nude photos of the Bush twins. Still, he has consistently inserted his libertarian politics into Hustler -- the magazine's articles and publisher's statements, with their often scathing criticisms of George Bush and the war in Iraq, reach an audience that publications like the Nation (and Salon) barely touch.

Flynt was in Los Angeles when Salon spoke to him this week by phone.

On Aug. 4, you told MSNBC that you were still waiting to decide whether you were going to go all the way with this campaign. Are you now committed to throwing your resources into it?

We're doing polling now. In the next week to 10 days, we will poll throughout the state of California, and if people are taking my candidacy seriously and if they can separate it from my profession, I'm prepared to go the distance. If it's too big a hurdle for them to have someone with my background in the office, obviously, I've got money but I'm not going to pour it down a dark hole. I want to get the results of my polling. If I've got 10 percent or better, I'm prepared to spend a lot of money and go after my opponent.

So this campaign isn't just a way to satirize the whole recall exercise or to inject yourself into the debate.

Absolutely not. I don't have any delusions of grandeur about being governor. There's no ego involved. The state has a lot of problems, and I feel I have a solution, and I'm the only person running who has come up with a way to balance the budget. I would expand California gaming to allow slot machines for private casinos and the tax from this would very easily enable the Legislature to balance the budget.

Before Schwarzenegger entered the race, you'd said that your name recognition was a big advantage because the field is so large and many candidates so obscure. Has Schwarzenegger changed that calculation?

I think that as many or more people know me as know Schwarzenegger. It's just that they would prefer an actor over a smut peddler. I don't suffer from my name recognition.

Are you going to go after Schwarzenegger the way you've gone after people like Bob Barr?

I think he's vulnerable in two areas. First, there's his lack of experience. I've been a businessman for 35 years. The second issue is his private life.

Are you in a position to attack him about his private life?

Please understand my position. I don't want to go after people because I'm concerned about their sex lives, but if people live a public life contrary to the way they live their private life, they're fair game. I don't have any skeletons in my closet. I wear them all on my sleeve. That's one advantage I have over my opponents.

No one's addressing the real issue. The huge strain on California's budget is illegal immigration, because we have to pay benefits and Medicare for these people. We need to close down these borders once and for all. I think the federal government would work with the California government to do that, even if they had to call the National Guard down.

That's not a popular position. Sixty percent of the voters in California are Latino. [According to UC-Berkeley's Survey Research Center, 14 percent of California voters in the 2000 election were Latino.] But I could care less about being socially acceptable. I'm more concerned about solving problems.

Another thing that California has done in the last two decades, it's spent billions of dollars on new prisons to warehouse people who are there only for nonviolent drug issues. We need to spend more money on intervention and a lot less money on incarceration. It costs more to incarcerate people than it does to treat their drug problem.

Doesn't California need illegal immigrants? Who else is willing to do things like pick grapes and work as nannies?

That's the argument they give, but how about the billions of dollars that the state is spending on education and benefits? I'm not sure if they balance out, but I know that we need orderly immigration. There's nothing wrong with immigration. This is a country of immigrants and we still need them, but it should be something that's done orderly and not for just anybody who can drive across the border and have a job the next day.

If you ever study my life or know me or know people who know me, I'm never politically correct. I just believe that there's a right and a wrong way to do things. That's the reason why I'm not interested in politics. Even if I was elected, I wouldn't run for another term. I'd fix this budget mess and serve out Davis' term. I see politics as the art of compromise, and I can't think of anything worthwhile ever accomplished by a compromising person. We have had some renegades in the system that have accomplished a lot, but they're few and far between.

You were a vigorous campaigner against impeachment. Isn't this recall drive similar, in that Republicans are trying to overturn the results of a lawful election just because they lost? Isn't there something anti-democratic about it?

I don't agree with that. Gray Davis can't point to anything he's done as governor. The only thing he's really done is make a bad situation worse. I think that the governor is responsible for most of the state's problems. Not all of them, but most of them. There's a provision for the voters to recall him and that process is taking place now. I think you're really seeing democracy in process.

But how is it democracy when Davis could get 49 percent of the vote, but be replaced by someone who got 10 percent?

Unfortunately, that's the way it's structured. I would bet you that next year the recall process will be changed. I don't think anyone ever anticipated that it would turn into a gong show.

Doesn't your candidacy contribute to making it a gong show?

You try to raise yourself above it, but it's kind of impossible to do because your opponents are all part of the fray. I think people will start dropping out, especially people with no money. They will start falling by the wayside and there will only be a handful in by election day.

If you go the distance, what type of campaign will you run? Are you planning any of the kinds of stunts that have made you famous?

What are your thoughts about the larger political scene in this country? You've been a fierce critic of Bush -- how much damage do you think he's doing to America?

I'm not a doomsayer. Over the last three decades, the pendulum has swung back and forth. The Democratic Party has a lot of problems now, but I think eventually they'll get their house in order. I think Bush has made several blunders, primarily with the tax cut and the invasion of Iraq, and I think they might be his undoing. But I don't like to predict politics because you know what they say, a week could be a lifetime in politics.

If you don't pursue this race to the end, are there any other candidates you'd support?

Arianna [Huffington] is a good friend and I would support her in a second, and if I decide not to run I would offer my support to her.

So if you'd support her, why run yourself?

She's not getting out the same message that I'm getting out, and I think my message is important. Maybe she'll change somewhere along the way.

If you say you're not doing this for your ego or to further any ideology, why are you doing it? What makes you care so much about California's finances?

I said in the beginning, I'm a smut peddler who cares. I care about the same social ills that all of us do, and I don't think because somebody has a profession that you may consider tawdry that really has that much to do with their ability to be governor.

I've always been a political animal. I've always been interested all of my adult life. I just see California as having some huge problems and no one is addressing them. I felt this would give me a platform to address those problems. If the people want to listen, fine. If they don't, at least I did my part.