This week should mark my second anniversary, but my wife died in the Sept. 11 attacks. When will the Bush administration tell the truth about what happened? 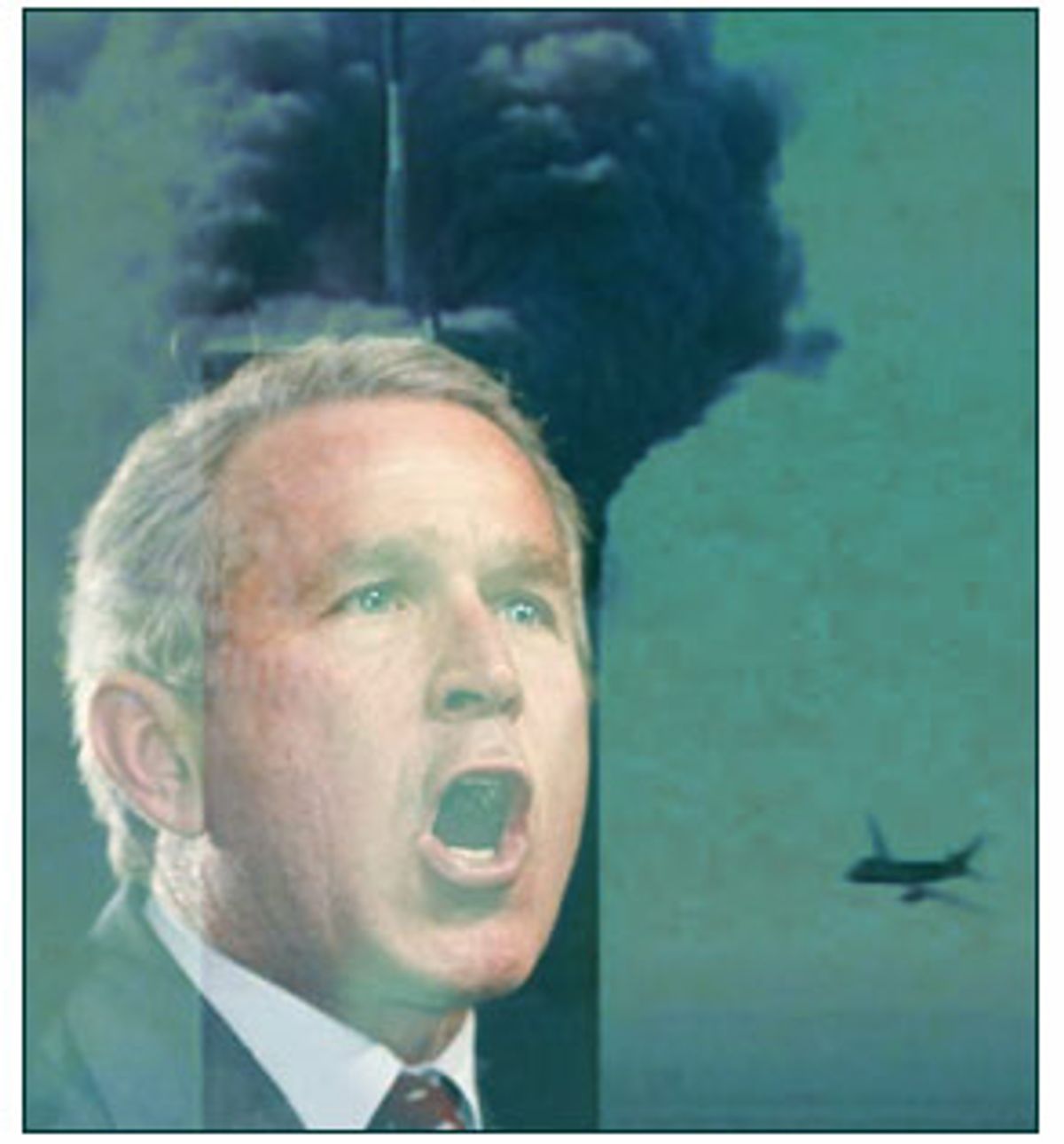 I should be celebrating my second anniversary this week. Instead, my marriage lasted exactly one month. My wife, Sara Elizabeth Manley, was killed on Sept. 11, 2001, in the 93rd-floor offices of Fred Alger Management in 1 World Trade Center. She was 31. We were married on Aug. 11, just a month before.

Expecting to see the twisted wreckage of a wayward Cessna, I instead saw a gaping hole in the side of the building and the dark smoke that was billowing from it. My heart sank. The hole on the northern façade of 1 WTC was very close to Sara's office. The second plane hit while I stared at the television, and all mystery about the catastrophe departed with the plane's arrival; I knew at that moment that the country was under attack.

I turned on my cellphone to call Sara, ignoring the voice mail messages that were already piling up. No answer -- then a fast busy signal. I redialed repeatedly, with the same result. I called my voice mail. Nothing from Sara, only concerned friends and family.

It wasn't long before my father and I were driving toward New York, listening to false reports that a bomb had been detonated at the State Department. From the height of Wisconsin Avenue, near the National Cathedral, I could see the smoke from the Pentagon rising above the city.

It struck me then that it was like a scenario from Tom Clancy's novel "Debt of Honor." In the book, terrorists crash a commercial airliner into the Capitol during a presidential address to Congress. In the book, hundreds if not thousands of people, including the fictional president of the United States, are killed.

The radio jogged my wandering mind back to reality with news that one of the Twin Towers had fallen. I furiously called and emailed friends and colleagues in New York in an attempt to find out which tower it was. It would be the last time I would give any thought to Tom Clancy until the next year.

"I don't think anybody could have predicted that these people would take an airplane and slam it into the World Trade Center," National Security Advisor Condoleezza Rice told reporters in May 2002, "...and that they would try to use an airplane as a missile." While only Rice knows her intention in making this statement, the rest of us now know it to be utterly false.

Let's forget about Tom Clancy for now. Even without using a novelist's imagination, the United States had plenty of information that could have led to the conclusion that terrorists "would try to use an airplane as a missile" -- precisely what Rice denied -- and it should have been preparing for the possibility. Government leaders had known of terrorists' intentions to use airplanes as missiles for at least seven years before Sept. 11. In 1994, French commandos stormed a hijacked aircraft while it sat on an airport tarmac awaiting refueling, preventing the Algerian hijackers onboard from flying the plane into the Eiffel Tower. Dubbed "the Marseilles plot" because of the location of the commandos' successful action, the details of this terrorist operation were well known to international intelligence agencies. The 1995 "Bojinka plot," in which terrorists planned to hijack 12 planes as they flew over the Pacific Ocean and crash them into high-profile American targets, was also known in the American intelligence community long before Sept. 11.

This June, citing a report in the Christian Science Monitor, former CIA analyst Ray McGovern wrote in the Miami Herald: "In the weeks before Sept. 11, Jordanian intelligence had warned U.S. counterparts that bin Laden terrorists were planning a major attack using aircraft inside the continental United States. The Jordanians had intercepted a crucial al Qaeda message that dubbed the operation 'the big wedding.'"

Even more damning for Bush administration's claims of ignorance about the chance that terrorists would use planes as weapons is the following exchange, which seems to expose the administration's pre-Sept. 11 knowledge about reputed "20th hijacker" Zacarias Moussaoui. The Monitor and the Washington Post both reported that upon learning of the attacks during breakfast that awful day, CIA director George Tenet told former Sen. David Boren, "This has bin Laden all over it ... I wonder if it has anything to do with this guy taking pilot training."

If the administration cannot tell a simple truth on this topic, one is forced to wonder what else it is lying about. While few of the other "truth discrepancies" that have emerged from the White House and other executive branch departments and agencies can be refuted as definitively as Condoleezza Rice's claim that the administration had no way of knowing al-Qaida "would use an airplane as a missile," a pattern of politicizing intelligence can be demonstrated.

Most recently the administration's history of politically manipulating intelligence and keeping its mistakes secret jumped into the news when family members of those killed in the Sept. 11 attacks called for the 28 redacted pages contained within the Joint Intelligence Committee Inquiry (JICI) report to be declassified. A bipartisan group of congressional legislators have added their voices to that demand.

The 28-page redaction is especially galling to the Sept. 11 families because we know the Bush administration has fought any serious inquiry into the events of that terrible day almost from the start. It opposed the formation of the 9/11 commission until it realized that the political groundswell that had developed following testimony before the JICI made it inevitable. Once the 9/11 commission was created, the administration did everything it could to neutralize it.

When told that commission member and former U.S. Rep. Tim Roemer, who had coauthored the JICI report as a member of the House Intelligence Committee, was denied access to that same report, Republican Sen. John McCain, one of the principal authors of the legislation that created the 9/11 commission, said, "While I don't want to believe such a basic lack of cooperation was intentional, it nonetheless creates the appearance of bureaucratic stonewalling."

The biggest open secret in Washington this summer is that many of the redacted pages in the JICI report address the connection of members of the royal family of the Kingdom of Saudi Arabia to terrorism. How do I know this? The same way I know that the sun is going to rise tomorrow morning -- I just know.

It is disingenuous -- at best -- for the president to claim that the release of all of the information contained within the 28 pages might compromise intelligence-gathering "sources and methods." Two members of the president's own party with expertise in intelligence matters, Sen. Pat Roberts, the current chairman of the Senate Intelligence Committee, and Sen. Richard Shelby, the past chairman of the same committee, have both called upon the president to release at least some of the information contained within the redacted pages.

Shortly after the Sept. 11 attacks, President Bush said that the United States "will make no distinction between terrorists and those that harbor them." It was a bold statement that signaled a new era in American foreign policy. Yet almost two years later, it is clear that the administration has carved out a special exception for Saudi Arabia.

My suspicion is that the redacted pages contain information that might reflect poorly on this administration and previous ones. The links between members of the Saudi royal family and the various "charities" that fund al-Qaida and other terror groups have been documented in the press as well as by authors such as Robert Baer and Dore Gold. What information -- beyond what is already in the public record -- does the JICI report have on the royal family's connection with the World Association of Muslim Youth or the International Islamic Relief Organization?

If the administration's demonstrated record of manipulating intelligence for unknown political purposes prevents the president from declassifying the remaining 28 pages of the JICI report, the Senate needs to take action. Sen. Bob Graham has called for his colleagues to use an unusual alternative method of declassifying the redacted material. A rarely invoked rule allows a member of the Intelligence Committee to initiate the release of classified material by calling for a vote that must be scheduled within five days. If a majority of the committee votes to declassify, the president then has five days to make a decision. Should the president refuse, the committee would refer the matter to the full Senate for vote. And if a simple majority of senators votes to declassify the information, the Intelligence Committee may do so.

I hope Graham goes ahead with the move. The American people deserve to know the true nature of our supposed allies. I deserve to know what my government knew about "the big wedding" that destroyed my marriage after just one month.

R. William Harvey is a member of the Family Steering Committee for the 9/11 Independent Commission. He lives in New York City.