Kevin Costner tries to become John Ford with his new western, but the real victims of the lethargic shoot'em-up are his actors. 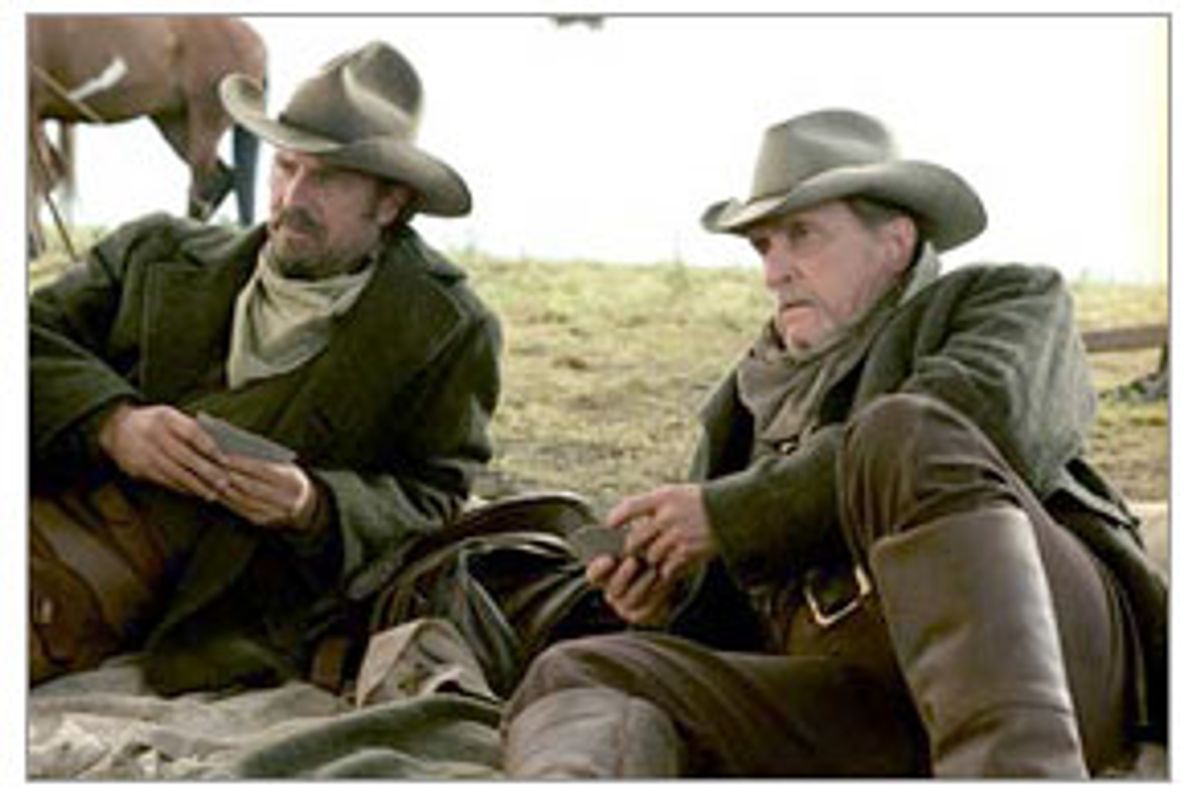 Bracing ourselves for the two-hour and 19-minute running time of Kevin Costner's "Open Range," a colleague asked me "Whatever happened to those guys who could make westerns in an hour and a half?" He was talking about the movies made in the '50s by Budd Boetticher, pictures that starred Randolph Scott and were often written by Burt Kennedy, most of them weighing in at around 75 minutes and no less full because of the abbreviated length. And he was talking about the series of westerns that Anthony Mann made with James Stewart in the same years, most of them no more than an hour and a half.

There isn't a frame of "Open Range" that doesn't proclaim its link to traditional, old-fashioned westerns and to what it sees as the bedrock American values of independence and fortitude. And yet in terms of our movie past "Open Range" is in every way a regression. It's not particularly damning to say that Costner's movie can't compare to the great westerns made by John Ford and Howard Hawks. Few can. In terms of craft, complexity, maturity, concision of narrative, suspense, "Open Range" is miles behind the work that was done quickly and on the cheap by Boetticher and Mann in the '50s.

A falseness has set into the way we think about westerns, tending to divide them into the "traditional" work of the studio years and then the "revisionist" westerns of the counterculture years. Sure there were plenty of square, conventional westerns in the '40s and '50s, and in the '60s and '70s there were pictures like "Little Big Man" and "Soldier Blue," the Vietnam westerns that existed to tell us we were and always had been a nation of baby killers. But none of the great westerns fits so easily into those molds. For all the violence and grit he brought to westerns, Sam Peckinpah was more of a traditionalist than he is commonly seen as. And Hawks and Boetticher and Mann often muddied the archetype of the clean, invincible western hero. Whether he was John Wayne in "Red River" or Randolph Scott in "Comanche Station" or James Stewart in "Winchester '73" the hero of these westerns was often conflicted, bitter, haunted by something in his past, and, in some essential way, distant. None of the values that we think of as traditional -- home, community, the role of women as wife and mother -- are left unexamined in these pictures. (The experience of women who don't conform, like Maureen O'Sullivan's spinster in "The Tall T" or the young bride Shelley Winters in "Winchester '73," are rendered with a keen awareness of the social limits put upon women at the time.) There is still plenty of tradition to be found in these westerns, admiration for hard, honest physical labor, a steadfast belief in right and wrong and the ability to distinguish between the two, a reliance on swift Old Testament justice. But they have a capacity for addressing what can go wrong in the American character as well as what's right about it. And they are more adult than the way many of us grew up watching them on Saturday afternoon TV would lead us to believe.

westerns are no longer part of our steady moviegoing diet. So when they come to us they arrive freighted with the weight of our mythic past. "Open Range" isn't the chore to sit through that Costner's "Dances With Wolves" was. The boring quality of it may at times feel like a relief after a summer of car chases and explosions. And if you're partial to the genre, the familiarity of it may get you through.

But the movie is slow, ponderous, weighed down by Costner's naked attempts to make it a classic. The movie hasn't even begun when we're asked to admire the diffuse Remington blues and wispy clouds in James Muro's cinematography. The honest faded cotton dresses of the movie's requisite good woman and the grimy, sweaty clothes of the cowboys are given the same sort of period fetishization.

The script by Craig Storper cobbles together plot elements from "Red River," "My Darling Clementine" and "Rio Bravo." Costner plays Charley Waite who, with his partner of Boss Spearman (Robert Duvall) are on a cattle drive. They're "free grazers," using the land they come upon to feed the cattle. That doesn't sit well with an Irish cattle baron (Michael Gambon) in one of the towns they pass through. He sends his thugs to force them off and they wind up nearly killing the young hired hand (Diego Luna of "Y Tu Mama Tambien" who's been given the Hawks-ish name Button). With Button being tended to at the home of the town doctor, Charley and Boss hole up in the town preparing for the final showdown. That the showdown commences when there's still 40 minutes of the movie to get through should give you an idea of how slowly it moves.

The problem with "Open Range" isn't that it's old-fashioned or melodramatic (though it's a drag that Costner resorts to the cheapness of having the bad guys shoot his faithful dog). It's that Costner can't simply tell the story without presenting every development as if it were chiseled in stone. The idea of the laconic Westerner translates for him as lugubrious shots of landscapes and pauses so pregnant you expect the Dionne quintuplets to burst forth. Costner isn't content to make "Open Range" a tale of two men attempting to complete a cattle drive. It's a leather-tooled metaphor for the American pioneer spirit, an ode to the independence that's roused when somebody tries to push us around. He's put the metaphorical meaning before the story and directed the whole thing so that we can never lose sight of its import.

It wasn't enough for Costner to be Gary Cooper (the dull later Cooper, not the sexy young star of "Morocco"); he wants to be John Ford, too. But even Ford at his most mythmaking didn't have this calculated self-importance. And as an actor, Costner simply doesn't have it in him to play a man conflicted and tormented about his propensity for violence. You don't feel there's anything potentially dangerous in Costner's silences, nothing unpredictable. When Charley Waite refuses to return the greeting of someone he just met, it doesn't appear as if there's anything being held back. He just seems to be rude. Costner has never been better than in the two movies where he was directed by Ron Shelton, "Bull Durham" and "Tin Cup." He was loose and funny in those movies; as an actor he found himself as a romantic goofball. But there's nothing in him to suggest the hard-won experience of the men he's drawn to playing, or the agony of the tough choices they're faced with.

With no real awareness of his own talents, it's not surprising he does badly by his actors. Michael Gambon as the corrupt Irish cattle baron gives one of the worst performances I've ever seen a talented actor give, chewing the scenery shamelessly. Duvall gets by with his lovable old codger routine because it's livelier than anything else here. An appealing young actor like Diego Luna shouldn't be choosing roles where he spends most of the movie unconscious. And when exactly did Annette Bening become Annette Benign? I don't know that I've ever seen an actress go so quickly from mean, lascivious, and funny (as she was in "The Grifters") to the removed dignity of "respectable" roles. (She had some great moments of comic hysteria in "American Beauty" but the misogyny of the movie made it impossible to enjoy them. And though I wouldn't trade Jamie Lee Curtis' performance in "Freaky Friday" for anything, you wonder what Bening, who dropped out of that movie at the last minute, might have brought to the part.)

That she's bad in "Open Range" isn't entirely her fault. Playing the spinster sister of the town doctor, Bening is stuck with the "Be careful, Matt" role of all time. She's the good little woman who has to stand by fretfully while her man's gotta do what a man's gotta do. (You can be excused for laughing when, right before the final showdown, Costner says to Bening, "Men are going to be killed today, Sue. And I'm gonna kill 'em.") Still, does Bening have to accede so easily to the faded-gingham softness of this role? Does she have to introduce the saccharine-sweet note into her contralto voice every time she pronounces Costner's name? There is reason to balk at the conventionality of Bening's role here (especially in light of how much more complexly women are treated in Boetticher and Mann) but if Bening is going to accede to her own declawing she has to bear some of the blame. Best of all in the cast is the late Michael Jeter as the character who runs the town stables. It's a Gabby Hayes role, the scraggly old eccentric, but it's a small blessing to have Jeter's talent for such eccentrics with us again for a few too-brief moments.

The big showdown that closes "Open Range" would seem to make nonsense of all of the fretting about violence that Costner's Charley Waite is called on to do here. The gunplay is fast and brutal (though not particularly well staged or shot) and there's not much regret in it. I don't think that there necessarily has to be. It's not a sign of moral degradation on the part of an audience to be happy to see the bad guys get it. And though there is an extended moment when Duvall stops Costner when he tries to go too far in exacting revenge, it's not a sufficient addressing of the uses of violence, given all the hand-wringing that's preceded it. But then nothing seems to be addressed in "Open Range" besides Kevin Costner's determination to put himself up there with Frederic Remington and John Ford. Given the inertness of the movie, the guys who design the dioramas for the Museum of Natural History would seem more attainable role models.