I'm a hardcore baseball guy not usually into mushy stuff, but this Harlequin romance really put cork in my bat. 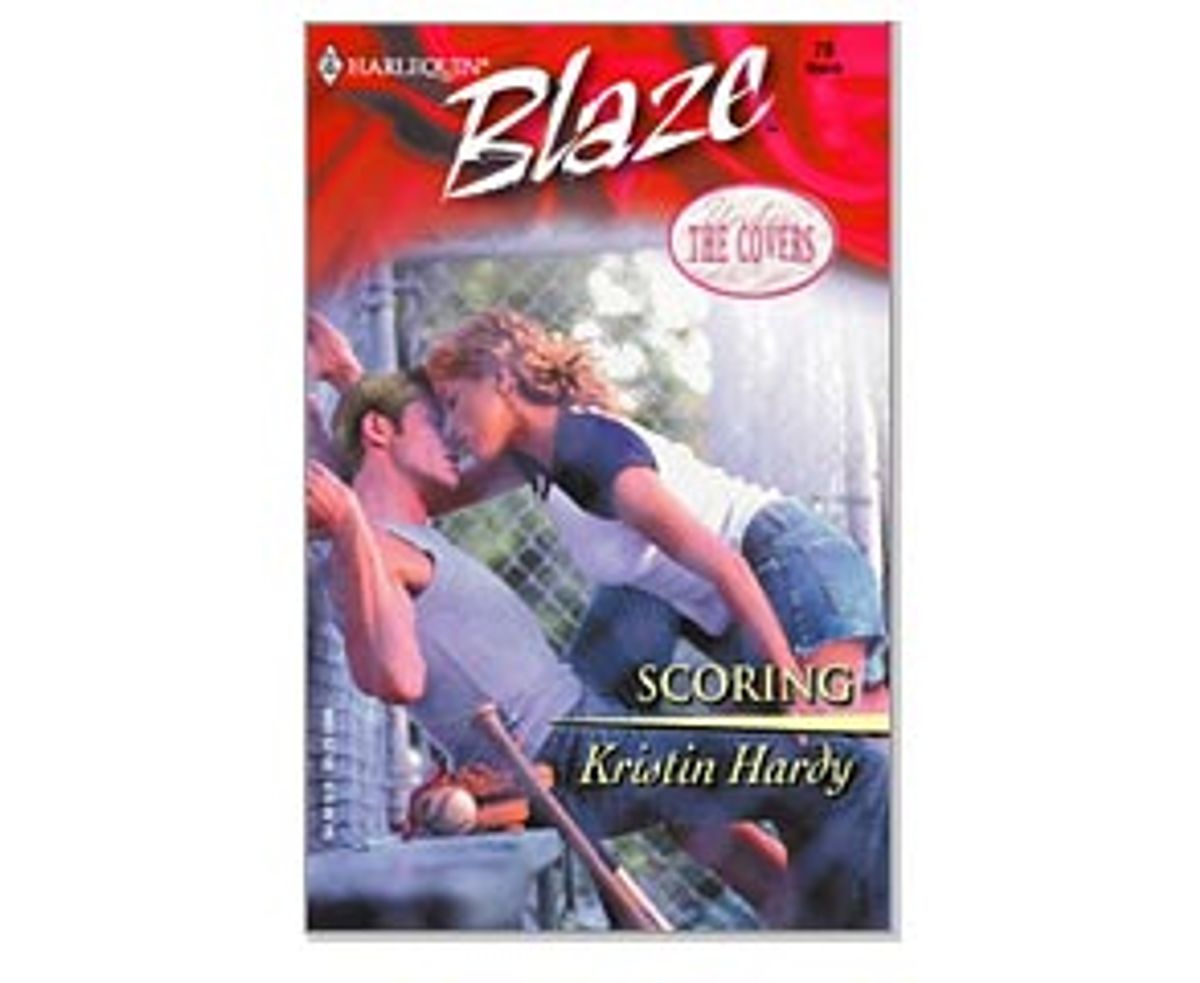 "You need to get your whole body into the swing, not just your arms." Mace put his hands on her hips. "These should rotate along with your torso." Heat bloomed from where his palms rested on her. "When you swing, your hips should turn, just like this." The heat disappeared for a moment as he reached up with one hand to pull the bat away from her, then held her hips again. "Now swing," he ordered, and his hands rotated her hips. "Again," he ordered, rotating her with such force that she spun around to face him.

His eyes flashed with surprise, then darkened as he took a step closer. His hands on her hips pulled her in against him. "Well, you seem to have the rotation part down," he said softly. "Now the key part is making contact. You've got to get wood on the sweet spot."

Getting wood on the sweet spot indeed, Becka thought, feeling the beginnings of his erection against her belly.

Will Mace Duvall and Becka Landon stay together? What if anyone finds out about their illicit love affair? And does having sex against a batting cage leave a permanent mark? These are some of the questions I've been asking myself since I finished reading a Harlequin romance about minor league baseball called "Scoring."

I'm a 32-year-old man, and I have been reading a romance novel. I'm not entirely sure how this happened, except that my girlfriend wanted me to read it. She told me excitedly that she had found a romance novel containing both explicit sex scenes and baseball, which happen to be two major interests of mine. How could I not read it? And she was right -- the sex scenes were hot. I was reading it for the baseball, although I did wonder whether my girlfriend might have intended this gift to be instructional. Perhaps it might be a good idea to take some notes.

Apparently, this novel by Kristin Hardy is not your ordinary Harlequin romance. "Scoring" is part of the Harlequin Blaze series, which means the sex scenes are a lot more explicit than in normal romance novels. There's oral sex in a moving car. Mace and Becka go at it for the first time while watching pornography on a hotel television. And then there's the aforementioned batting-cage sex scene that takes place in front of an empty stadium:

"Of course, I seem to remember you telling me earlier to get a firm grip on the wood and stroke." She tightened her fingers around him and began to slide up and down on him. The rush of sensation sent need surging through him and he cradled her neck in his hand and kissed her hard, trying not to concentrate on the touch that threatened to send him over the edge ...

He caught her and whirled her around, pressing her up against the chain link fence. His hands pinned her wrists to the wire, and he pressed his body lightly against hers. A thrill shot through her, and arrowed down into the pit of her stomach.

OK, the sports part isn't that good, but it's not bad, especially if you're an avid baseball fan like me. I'm pathetic enough to recognize minor leaguers, so I was pleased to find that the story revolves around the Lowell Weavers. The Weavers are based on the real-life Lowell Spinners, a minor league affiliate of my Boston Red Sox. And there's even one scene that takes place during a game at Fenway Park, a setting that I suspect had been quite underutilized in the world of romance novels until Hardy came along.

It's also odd to read a romance that is set in Lowell, Mass. Nothing against the fine people of Lowell, but I've spent time there, and romance is not the first thing that comes to mind when thinking of this old factory town. Becka doesn't actually fall in love with anyone from Lowell. Instead, she is fixated on Mace, the sexy Southerner. There's much talk about the "cadence" of Mace's Southern accent. Apparently, she isn't quite as interested in the cadence of the local boys: "Hey, Becker, wicked pissah about the Sox, huh?"

As for the plot, Mace is a former baseball star who has come to Lowell to help the Weavers with their hitting, and Becka is the team's trainer. She thinks Mace is just a little too dangerous for her. (That would be why he's called Mace.) She resists as much as she can, but finally after about 70 pages she succumbs to his manly charms. In fact, she succumbs quite a lot -- in many different positions and with mirrors.

There's a lot of plot. From my previous, limited experience with adult entertainment, I'm not used to this much plot. If it's there I don't notice it because I'm too busy hitting the fast-forward button. Here, I would get all worked up from some scene, and suddenly there would be another 20 pages of frustrating story to get through. There are several supporting characters as well (including the hot female bartender and the young rookie), though none of them get involved in the action.

The plot gets particularly noticeable toward the end, when Becka finally decides she loves Mace. She figures this out when they attend the wedding of her childhood friend. The emotion of the day overtakes her, and what follows is an overly mushy chapter that contains such words as "magical," "incandescent," "forever" and "love." (This is not nearly as good as Chapter 14, which includes the words "voluptuous," "tongue," "shaft," "convulsing" and "cleft.") By the end of the chapter, Mace's "face held all the meaning of her life," and I was laughing at the pure sappiness of it all.

Or was I? Ashamed as I am to admit it, there was a small part of me that got caught up in all the romance. (I had to do something while waiting for the sex and baseball.) At one point, when they start having problems, I found myself thinking, "Oh, Mace, just tell her the truth. Confide in her. Tell her that you love her," until I came to my senses, put the book down, and just turned on a ballgame instead. What was happening to me?

The ending is a happy one, and I felt a little surge of joy to know that everything had worked out for them. I was hoping that the couple would celebrate this happy ending with one final sex scene or at least some good baseball but, alas, I was disappointed. Still, there is a marriage proposal and Mace is promoted two levels to become the new batting coach for the Pawtucket Red Sox. By the end of the book, he's just one step away from being back in The Show. I almost cried.

Joe Lavin is a freelance writer who lives in Cambridge, Mass.