The wildly popular "Fight Club" novelist Chuck Palahniuk is back with more fodder for his army of disenfranchised Everymen, delivered with all the grace and poetry of a blunt object. 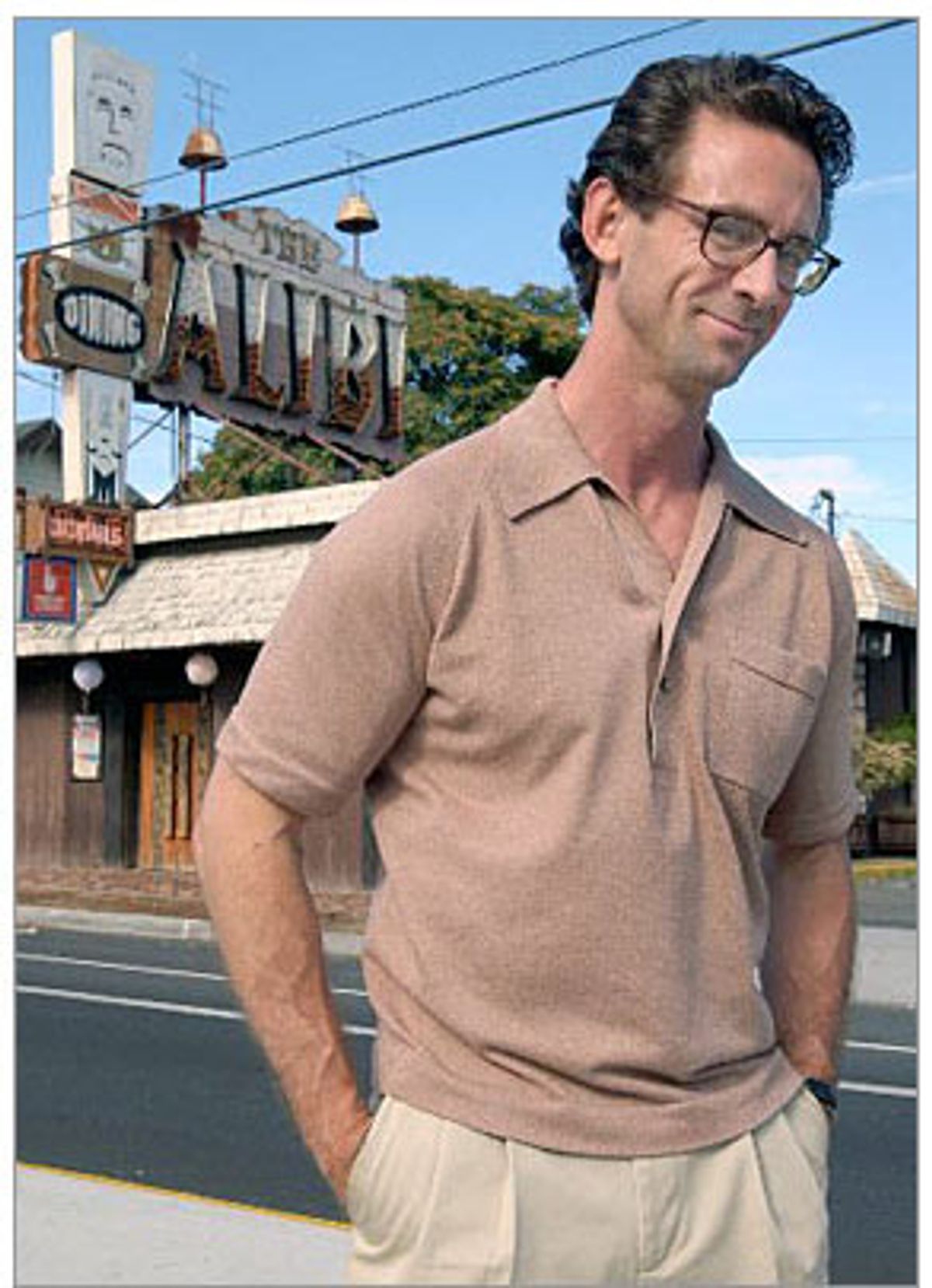 Imagine some crappy novels. Imagine that they're all written in the same phony, repetitive, bombastic style as this paragraph, all hopped-up imperatives and posturing one-liners. Imagine that they're sloppily put together. Imagine that everything even remotely clever in them has been done before and better by someone else. Imagine that each one flaunts the kind of "research" that can be achieved by leafing through a trade magazine for 30 minutes and is riddled with grating errors. Imagine that these books traffic in the half-baked nihilism of a stoned high school student who has just discovered Nietzsche and Nine-Inch Nails. Does it hurt yet? Now, imagine that every five pages or so the author of these novels will describe something as smelling like shit or piss because the TRUTH is fucking ugly, man. Imagine that he affects to attack the shallow, simplistic, dehumanizing culture of commodity capitalism by writing shallow, simplistic, dehumanized fiction.

But, heck, why go to all the effort of imagining any of this when a new Chuck Palahniuk novel arrives at your local bookstore annually?

The latest is "Diary," the story of Misty Marie Wilmot, who works as a waitress on a tourist-plagued island off the New England coast. Peter, her building-contractor husband, lies in a coma after a suicide attempt. Early on, it's fairly obvious that Misty's 13-year-old daughter and mother-in-law are colluding with the rest of the island's old-family residents in a homicidal plot to drive the tourists away by forcing Misty to become a painter. Misty, however, remains clueless about this despite everyone's egregiously suspicious, "Rosemary's Baby"-style behavior and despite the fact that shortly before Peter shut himself up in the garage with the car motor running, he went around scrawling graffiti about the plot in the houses of his clients, then walling off the vandalized rooms to make it look as if they'd never existed. (By the way, the car now smells like urine.)

If this sounds like an incoherent mess, it is. The gimmick of "Diary" is that it's supposed to be a journal Misty is writing for Peter should he ever emerge from his coma. Employing that kind of ventriloquism in a suspense novel would be a tricky thing to pull off for even an accomplished and careful writer, and since Palahniuk is neither, he makes a real hash of it. The narrative wobbles between an unlikely but probably easy-to-write third-person, an aggrieved second-person addressed to Peter, and another second-person narrative addressed, bafflingly, to Misty herself. Eventually, when Misty is kept imprisoned and blindfolded by the townsfolk, it's not clear who's writing it. In any event, at no point does the novel resemble a diary, nor does it sound or feel like the voice or thoughts of an overworked, grief-stricken single mother. Alice never lived here.

A great novelist excels on the small scale and the large, the individual leaf and root as well as the forest; good fiction convinces us that the imaginary is real by selecting exactly the right detail and rendering it perfectly. Reading Palahniuk is a revelation of sorts because it shows that bad fiction works exactly the same way: It's execrable on a sentence-by-sentence basis as well as in overall form and theme. The bad writer, it turns out, picks exactly the wrong detail, flubs it, and then tosses it like a stink bomb in the path of the reader dutifully struggling to follow him. This is a signature Palahniuk technique. In "Diary" there's everything from a glass of "bright orange" wine (when was the last time you saw wine the color of Tang?) to summer homeowners whose initial failure to notice that one of their rooms is missing is shrugged off as a result of too much familiarity -- "After you live anywhere long enough ... it just seems too small" -- even though a paragraph later it says they inhabit these houses only "two weeks each year."

In a typically calculating bit of Palahniukian grotesquerie, we are told that in Peter's "kind of coma ... all the muscles contract ... they shrink and pull your head back until it's almost touching your ass," and, who knows, perhaps this really does happen -- though you'd think the also-shrinking abdominal muscles (not to mention the spine) would prevent such contortions. But as for the bit where the comatose person's "fingers curl under with the fingernails cutting the inside of each wrist," well, gentle reader, I invite you to try that one right now. Perhaps if you're an exceptionally limber concert pianist you might manage to press your nails against the "inside of each wrist," but not by curling your fingers.

In the realm of social observation, ostensibly Palahniuk's forte, we have the "rich strangers" who flock to the island, with their diamonds and "shiny sports cars," demanding "the power seat" in the restaurant where Misty works, tofu instead of veal, and "chelated silver or carob sprinkles or soy-based anything" in their coffee. That might describe a known demographic, but certainly not one whose females wear "so much black eyeliner they could be wearing glasses," "dark brown lip liner," and "long, hooked fingernails" or whose males spray "black flock" on their bald spots, as Palahniuk would also have it. Nor do rich people make a habit of frequenting billboard-studded beaches where "floating in every wave, you see cigarette butts" and there are "sticky used condoms in the sand," let alone "syringes washed up on the beach." (The latter is a nasty side effect of urban waste-disposal problems, not tourism, anyway.)

Blunders like those are rife in Palahniuk's books and more or less glaring, depending on your areas of expertise. A few examples: In "Invisible Monsters," which is about a disfigured model on a crime spree, he's got a "top-drawer party girl" wearing a "Bob Mackie knockoff" of astronomical price. (Knockoffs aren't expensive -- that's the whole point of them -- and no fashionable woman would be caught dead in a Bob Mackie original.) In "Lullaby" he thinks Athena is the Greek god of love (in "Diary" he thinks it's Apollo), and he writes that "experts in ancient Greek culture" believe that "when ancient Greeks had a thought, it occurred to them as a god or goddess giving an order," when in fact this is a fringe theory advanced by Princeton psychology professor Julian Jaynes. Realtors, Wiccans and antique furniture dealers can probably find even more.

Palahniuk maintains his commitment to the slipshod at the level of plot as well. In "Diary," Misty befriends Angel Delaporte, a client of Peter's, who is intrigued by the rage-filled invectives he finds written all over his walled-off kitchen. Angel helps Misty track down and analyze other samples of Peter's pre-coma handiwork. Later in the book, it's revealed that Peter was Angel's lover and planned to flee the island with him on the very night of Peter's "suicide" -- now unveiled as an attempted murder by the island's conspirators. But if Angel was Peter's friend and not one of the hated "summer people," then why did Peter paint Angel's kitchen with curses and wall it off?

Spotting gaffes big and small can be a minor diversion -- a sport of sorts, like bird watching -- while you are slogging through the wastelands of Palahniuk's fiction (surprisingly vast feeling, given the books' actual page length). There's not a lot else to relieve the monotony, especially when the author indulges his penchant for repetition. Reading this is like being cornered by a dimwitted and semi-belligerent drunk possessed by an idée fixe he keeps reciting over and over again, jabbing your shoulder each time. Several dozen paragraphs in "Diary" begin with "Just for the record ..." for no detectable reason. The joke of bitterly reporting Misty's mood as if it were the weather gets pounded into the ground, as does treating the trials of her miserable life as cues in a drinking game. Several references to everyone being in a "personal coma." Many things smelling like shit and piss. Countless anecdotes about suffering artists ... Hey, wait, there's another blooper over there!: Lord Byron didn't fast and purge for his art; he was always fighting his own unfashionably un-Byronic chubbiness. How fitting to run into the old poseur in this neck of the woods.

The emotional range of "Diary" is similarly stunted. Misty isn't the only Palahniuk hero who doesn't sound like whoever she's supposed to be. This problem is endemic to his novels: Everyone in them sounds like Chuck Palahniuk. They have one of two moods: gleeful, sloganeering wrath and sullen self-pity. Not surprisingly, this makes his work very appealing to teenagers and the sort of young man whose disaffection springs from hazy origins. (In Palahniuk's best-known novel, "Fight Club," guys oppressed by desk jobs and the availability of inexpensive and stylish yet flimsy Swedish furniture can find relief only in beating each other up. That's "up," not "off," though you gotta wonder. Anyway, the more or less veiled homoeroticism in Palahniuk's fiction is in turn just a veil for narcissism.) As with SUV commercials, the target audience seems painfully clear: It's that strangely oversize fellow you sometimes get seated next to on airplanes or in bars, the one who loudly testifies to "laughing my ass off" all the way through Palahniuk's "fucking twisted" books and then glares, as if daring you to deny that such a thing is possible or that he is one dark and edgy dude.

The object of all this anger is, vaguely, the overall shoddiness, greed and hypocrisy of contemporary life. It is the culture that promises Misty a "special safe place where she'll live, love and be cared for, forever." (Would that be the same culture that gave "American Beauty" an Academy Award?) Misty's fury at being betrayed in this is the wail of a disappointed child, disgust at a world that turns out not to be all about "Flowers and Christmas lights ... what we're programmed to love." And so, according to the pendulum extremism of adolescence, life must instead be a lie, a fraud, a joke, shit and piss. The excessiveness of this attitude makes Palahniuk's ever expanding popularity less dispiriting. His fans may yet grow out of his cartoonish fiction and into a better remedy for debased consumerism: art about the complexity and paradoxes of human beings and their fate. Until then, a hair of the dog that bit them will have to do.