Fragging for fun and dollars

A new wave of gaming sites reward shooters with cash. Gambling regulators are not amused. 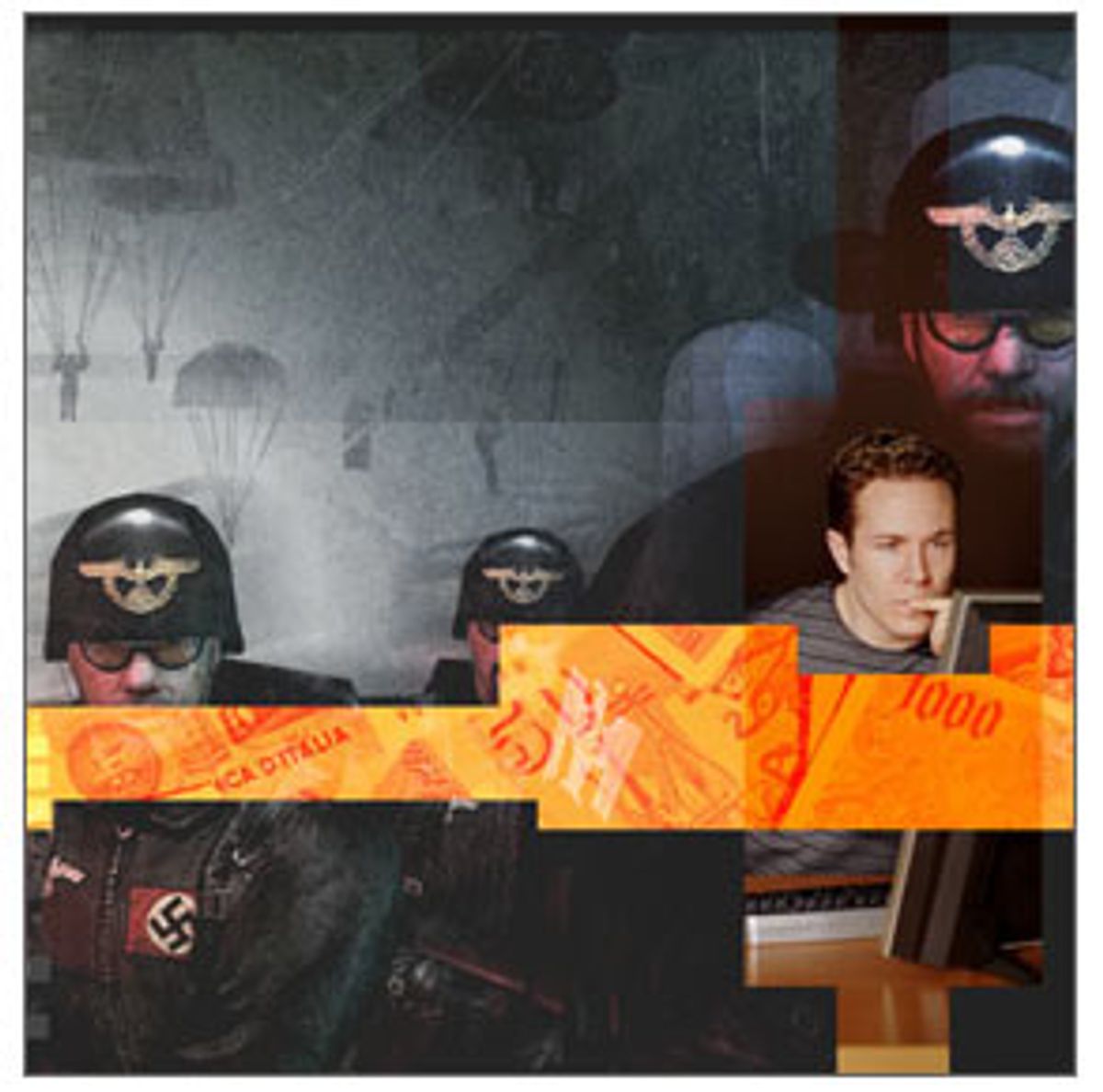 James Rogers is a stay-at-home father by day. After hours, he makes money as an assassin. Rogers, a 33-year-old from Buford, Ga., an out-of-the-way town he jokingly describes as "basically nowhere," is one of thousands of first-person shooter (FPS) addicts nationwide signing on to new gaming sites that allow gun-crazed video gamers to kill for cold cash.

In the past, gamers had to play on public servers for nothing but bragging rights. Cash could only be won at national tournaments hosted by gaming publications and software companies. But now players can wager 24/7 at sites such as Ultimate Arena and YouPlayGames.com. "My wife calls me a dreamer," says Rogers, who plays Activision's "Return to Castle Wolfenstein" at YPG. "But this is exactly the kind of thing that I'd want to do for a full-time job."

Though he's not banking significant coin just yet and his wife is a little frustrated with his obsessive four to eight hours of daily play -- she just doesn't get it sometimes, he says, incredulously -- Rogers is certain that it's only a matter of time before he's paying rent with his winnings. "She bitches at me a lot. It's hard," laughs Rogers, who's in charge of their 7-year-old son during the day while his wife sweats it out managing a nearby Wendy's. The way it is now, he makes just enough to pay "a couple bills a month. But I tell her it's like when kids started riding skateboards or doing BMX. It started as fun, but later turned into a moneymaker. The thing is, if I wasn't playing I'd probably be watching TV."

YPG was the first kill-for-cash site of its kind. Launched last April with the World War II-themed "Return to Castle Wolfenstein," it heralds a new generation of gaming sites that, though legal, are sure to test the murky territory of federal gambling laws as they grow in popularity. In its first four months of business, YPG has racked up 18,000 registered users, and Ultimate Arena, launched in June, already has 10,000.

Chris Grove, executive director of YPG, lives and runs the company on the endlessly sunny island of Antilles, just off the coast of Venezuela and -- surprise -- out of reach of U.S. legislators. Along with a few islands in the Caribbean, Antilles is headquarters to many other online casinos, not to mention a handful of Fortune 500 businesses there to escape Uncle Sam's heavy taxes.

"As a big gamer myself, I'm really into the world that exists outside of reality," opines a dreamy Grove, 31, who had a previous life as an online casino entrepreneur but who says he's been a huge shooter fan for years. "YPG allows players to fulfill their offline fantasy online and actually make some money doing it."

Ultimate Arena set up shop in Menlo Park, Calif., and hosts a slew of big-title FPS games including "Counterstrike," "Unreal Tournament," "Unreal Tournament 2003" and "America's Army," a government-produced game that no doubt adds a certain amount of credibility to the emerging platform. Plus, its chief gaming officer is Dennis "Thresh" Fong, a professional gamer in his own right. After becoming the world champion of "Quake," "Quake 2" and "Doom," winning thousands of dollars at tournaments and a slick red Ferrari (which he still drives), Thresh has picked up a prickly -- not to mention envious -- fan club.

"I get hundreds of e-mails a day from people talking garbage and saying they want to take me on," says Thresh, 26, who founded Ultimate Arena with two other young entrepreneurs. "And I always wished I could say to them, 'Are you willing to put high bucks on a game' -- which wasn't a reality until we put up Ultimate Arena."

That's the nature of these gamers. They're hardcore. It's more than entertainment. It's an ego thing, and they don't take losing easily. Which makes the cash element an interesting addition to their world. Call it the wild card.

Both sites essentially work the same way with a few minor differences in payouts and transaction fees. After signing up and depositing at least five bucks into an account via credit card or PayPal, players pony up entry fees, typically ranging from 50 cents to a dollar, sums that could increase down the road if demand rises. At YPG, players get paid per frag, or kill. You kill another player, you get a buck. At UA, shooters get paid per round.

At the end, all winnings get automatically transferred to the victor's account minus the commission paid out to each of the companies. UA pockets 15 percent of the pot while YPG takes an average of 3 percent from the winning side of each kill, depending on the game's level and your ranking. As far as cheating goes, internal security teams at the sites work with Even Balance's patented PunkBuster anti-cheat software to guarantee that everyone gets paid honestly and fast.

Most mornings and afternoons, there's not much happening at either site, a dramatic contrast to the perpetual, 24-hour betting going on at online casinos. A lot of the action takes place after hours, possibly because many gamers haven't heard of the sites yet. The dearth of players not only limits the amount of money gamers can make but also puts a big question mark on the viability of such a business. Though YPG and UA say they have thousands of registered users, executives at the companies admit that an average of only about 20 or so gamers play at one time and neither company will say how much money they're making -- or losing -- right now.

Still, it's a young business. And as one UA gamer said, "We're just getting used to the money part." The biggest single pot yet at UA was about $90, but serious shooters are starting to rack up thousands in extended play. Add to that the fact that these sorts of games are notoriously addictive, and you've got a business model that seems compelling. People who get into games like "America's Army," "Unreal Tournament 2003" and "Return to Castle Wolfenstein" get into them intensely. And for UA, with the launching this week of "Counterstrike," one of the most popular first-person shooters, players are sure to swoon.

"This is the difference between playground ball and pro play," moons gamer "Sergeant Bigman," a top shooter at Ultimate Arena. "On the pubs [public servers], most of the players screw around. But now you got money riding on it and there's more on the line. It definitely kicks up the level of play. Makes you want to go nonstop."

So it could be just a matter of time before those nearly 15 million FPS gamers out there discover these sites and play just as often as the poker and blackjack players do at the many online casinos. That's a $6 billion-plus business. Surely, the advertisers will follow. And the profits.

Yet it's exactly this addictive quality of gaming in general that concerns Rep. Spencer Bachus, R-Ala., who recently co-sponsored a bill that prohibits financial institutions and creditors like PayPal and Citibank from completing transactions for electronic wagers made on illegal sites.

"It is up to the states to determine what is legal," says Bachus. "Internet sites are not above the law. If proponents of YPG (and others) believe that their site should be legal, they should submit an application to a state gaming commission."

Bachus asserts that the bill is an attempt to curb betting, chiefly by chronic and underage gamblers. "Internet gambling sites live off addicts and seek to continue their business by creating new ones," says Bachus.

YPG had a run-in recently with an underage player. In its first months of business, the site had a 13-year-old playing and winning money, a situation that was brought to light by James Rogers. "He was beating everyone. He took a lot of my money quickly," says Rogers. The company says that it disqualified the minor and has not had another problem since.

Game site operators disagree vehemently with the perception that their ventures are similar to gambling.

"We don't offer gambling. People win money based on skill," says Fong. Gambling is regulated by the federal government and includes any "game that involves chance." Games of skill are state-regulated. Currently, 39 states allow wagering for games of skill, which are defined roughly by three elements: It is impossible to win a game without skill, players know the standards of skill necessary to play, and rules for the game are objectively enforced.

Fong describes the wagering-for-cash issue at UA this way: "Think of it as a softball tournament. Every team puts in five or 10 bucks and the winning team takes away the pot."

Sure, but as Michael Mount, a copyright and technology attorney with the San Diego law firm Gray Cary, says, "This isn't a local softball game. It's a national-level game using federal communication systems."

The question of the legal status of these sites will only become more pertinent over time. Other gaming-for-cash sites are beginning to raise their heads, including Arkadium, Viasta.com and Iongamers. Iongamers, a New York start-up that launches in the fall, will not offer the wagering option until perhaps next spring after developing a population of gamers from its offline tournaments. Instead of paying transaction fees, users cough up a $9.95 monthly membership, which allows unlimited access to popular games such as "Quake 3," "Unreal Tournament" and "America's Army." Though cash-starved gamers won't get the instant payoff of a frag or a winning round, winning online could have monetary benefits down the road. If you're good enough and play out three months of qualifying rounds on the site, you could end up at one of the offline tournaments around the country where the stakes go as high as $65,000.

Provided this new generation of gaming sites actually gets off the ground. Right now, with more users adopting the service weekly, it looks promising. In the meantime, "It's a cat-and-mouse game between these gaming sites and lawmakers," says Lawrence G. Walters, a partner at the Los Angeles law firm Weston, Garrou & DeWitt. "Lines continue to blur with technology. But I don't think regulators will catch up anytime soon because they haven't even caught up with standard gambling.

"There are numerous proposals to regulate and criminalize gambling online," Walters adds, "but no one really understands the Internet. I'm guessing that it will be a long time before lawmakers catch up with the goings-on in the Internet world of 20-somethings."

Perhaps, but the early history of the Internet is littered with companies that thought they could run faster than the law and eventually got caught. Case in point: Napster. Napster's demise is something for these new companies to consider, counsels Mount. "I think how these companies promote this new form of gaming will be an important issue. Napster didn't help itself by the way they appeared in the press. They liked the idea of being pirates. And that attitude only made their issue worse," says Mount. "Let's just see how these companies successfully go from below to above the radar. That's going to be the real challenge."

Christopher S. Stewart lives in New York City and is looking to sell his first novel.