Why Dean and Franken are so hot right now

After years of being kicked in the teeth by GOP bullies, Democrats have finally found two brawlers who know how to give it back. 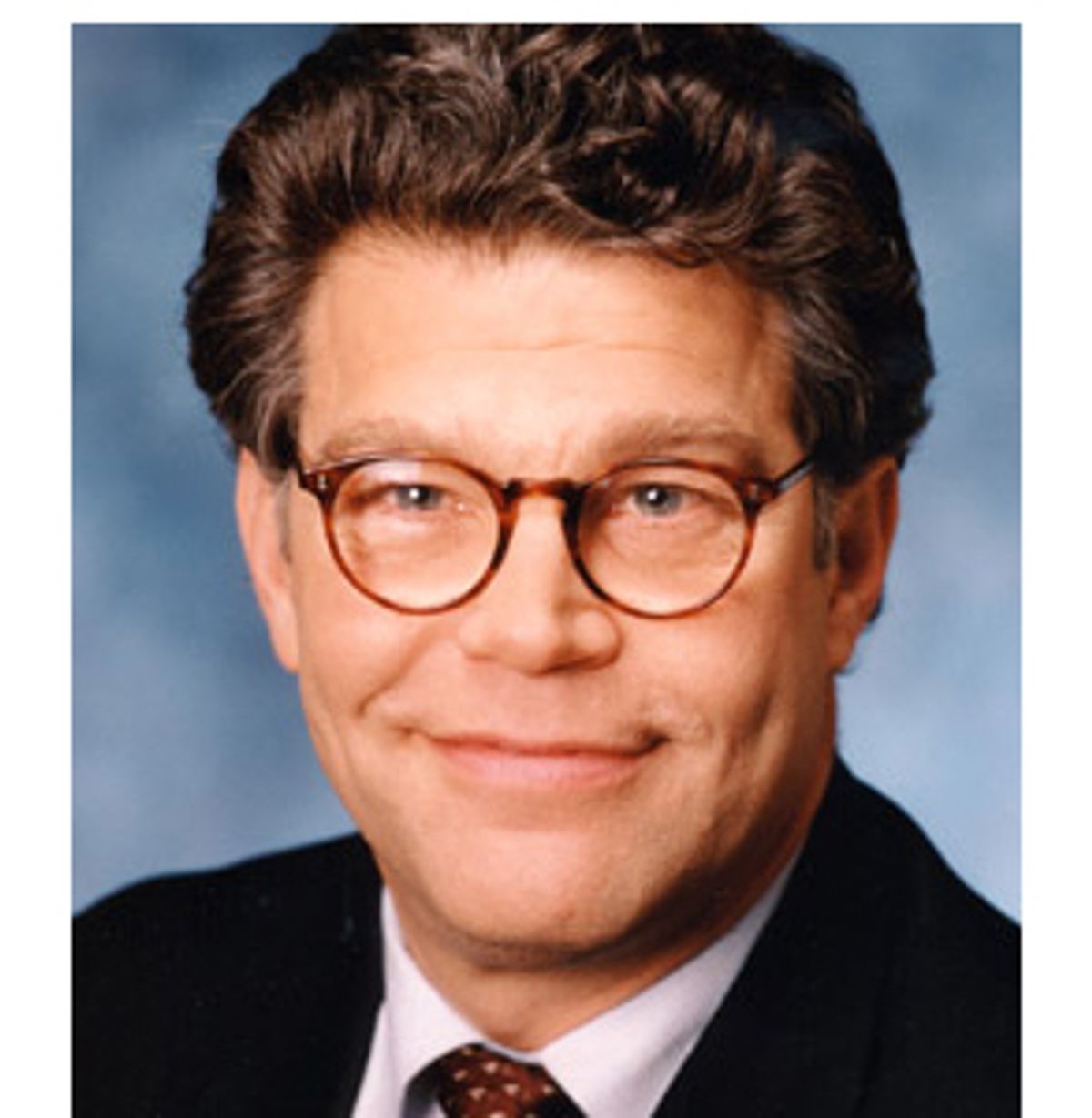 Nothing is so gratifying to a movie audience as the moment when a sorely abused hero (man, woman or animal) finally feels his strength and gives his tormentors what they richly deserve. From "High Noon" to "Rocky" to "Seabiscuit," America loves to see a comeback, a righting of wrongs, a bully brought to his knees. Which is why, I think, Al Franken and Howard Dean are the men of the hour. For years, we have suffered while right-wing bullies hijacked American politics and media -- persecuting a president for a consensual sex act; stealing the 2000 election; trashing the country's economy, environment and constitutional safeguards; handing the government over to the highest corporate bidders; deceiving the public into a bloody quagmire; and then brazenly smearing anyone who dared to criticize this orgy of dreadful leadership as un-American.

After Clinton left office, and in particular after 9/11, Democrats seemed to lose the will or skill -- or both -- to fight back. The opposition party was a sad palooka slumped to the canvas, cowering in anticipation of the next blow. Think Tom Daschle, the party's "kick-me" standard bearer, being gleefully libeled as a Saddam-hugging traitor by GOP carpetbaggers in his own state while his brave colleagues... ran for cover. This wasn't the give and take of a robust democracy, it was a blood bath.

But month after month, the resentment grew -- you could see it and feel it on Web sites that the corporate media dismissed as fringe. And then finally, it came pouring out, in a wave of money and volunteer energy for the Dean campaign. And it's still cascading, turning a candidate once scoffed at by the punditocracy into the Democratic front-runner -- and forcing his rivals to amp up their Bush-bashing rhetoric to match the party faithful's passionate mood.

On Monday, the New York Times' Adam Nagourney reported that the White House and the Democratic Party have both concluded that because of the increasingly polarized and evenly divided political landscape, the 2004 race will focus mainly on turning out the parties' core voters, rather than appealing to swing voters and independents. This means a campaign unlike 2000, with its muted, centrist tones, but one that delivers red meat to the parties' respective bases. And what is the temper of the Democratic Party base? They loathe Bush and everything he stands for -- he's become a lightning rod for dark and febrile passions in the same way Bill Clinton was (and is) for the GOP core. It's not just his harebrained ideological nostrums for how to reorder America and the world. They hate him and it's personal. They hate his frat-boy smirk, his phony fly-boy act, his cringe-inducing mangling of the language, his born-again sanctimony, even his Texas twang and his godforsaken, tumbleweed ranch where only someone as fence-post-dumb as W. would hole up in August. They hate him like their lives depended on it, lives that will certainly be unbearable if this bumbling extremist is reelected (or elected) in 2004.

The Democratic faithful lust for someone who will knock the cocky look right off George W. Bush's face -- as well as the arrogant mugs of Rove, Cheney and all the rest. Someone who knows how to fight just as hard as the men who scrapped and scraped and stopped at nothing until Florida, and the nation, was theirs. Right now, that looks like Howard Dean, the blunt-talking former wrestler. As one-time Clinton aide Sid Blumenthal, who knows a thing or two about taking off the gloves, says, "Candidates have to fight back hard, or else voters don't believe they'll fight for them."

By the sound of his official presidential announcement speech on Tuesday, John Kerry seems to have gotten this message. Kerry's rhetoric was tough and unflinching -- the Bush White House is ruled by "a radical ethic that ... glorifies a creed of greed" and a "swagger(ing)" foreign policy. "Being flown to an aircraft carrier and saying mission accomplished doesn't end a war," said the decorated Navy veteran. "And the swagger of a president saying 'Bring 'em on' will never bring peace. Pride is no substitute for protecting our young men and women in uniform. Half the names on the Vietnam Memorial are there because of pride -- because of a president who refused to admit he was wrong."

These are the kind of plain-spoken words that will rally today's Democratic voters. Kerry -- who has seemed to be sleepwalking on the campaign trail, guided by an old Al Gore, play-it-safe manual -- needs to keep saying them loud and clear if he wants to take the momentum from Dean. It was Kerry's one burst of hot lead -- a fiery putdown directed at chicken hawk Tom DeLay for impugning his patriotism -- that brought his campaign the biggest injection of Dean-like Internet donations so far. The message, again, could not be more clear for Kerry and the Democratic presidential pack (a group that seems more and more eclipsed by Dean's grass-fire campaign): Anti-Bush voters want a fighter -- not, God help them, a self-righteous Joe Lieberman who refused to muddy his trousers and stoop to the Bush team's level in Florida.

Those seeking to replace Bush in the White House would do well to read the New York Times No. 1 bestseller, Al Franken's "Lies and the Lying Liars Who Tell Them: A Fair and Balanced Look at the Right." The instant, runaway success of Franken's new book is not just a result of Fox News' inexplicable decision to shoot itself in the foot and head by launching an idiotic trademark-infringement lawsuit, but also the author's bold -- and roaringly funny -- knack for confronting the Bush presidency and its prevaricating apologists. The best parts of "Lies" come when Franken literally gets in the faces of Bill O'Reilly, Sean Hannity, and a surprisingly mean Barbara Bush. After watching National Review's preppy editor Rich Lowry denounce the Democrats on C-SPAN for "sissifying" and "feminizing" politics, Franken calls him up and challenges him to a "Fight Club"-like mano a mano in his parking garage. "I'm 50 and have a bad back. But I think I could take you," the humorist tells him. A flabbergasted Lowry asks to sleep on it, but then wimps out the next day when Franken calls him again.

Again and again, Franken finds that the bullies of the right quickly fold when confronted, or are unable to back up their big talk about liberal perfidy and treason when challenged on their facts. Why did O'Reilly come so embarrassingly unhinged earlier this year at the notorious Book Expo showdown with Franken ("We were both there to promote our books," writes Franken. "Bill was hawking his latest, 'Living With Herpes,' while I was promoting -- with evident success -- the book you are enjoying right now")? Because O'Reilly and his fellow thugs on the right are so used to having the stage to themselves that they can't take the heat when it finally comes their way.

Franken clearly gets under the skins of the right-wing bully boys. And he does it by smiling right in their faces and letting them know he's on to them. "They used these (lying) tactics to cripple Clinton's presidency," writes Franken. "They used them to discredit Gore and put Bush into office. And they're using them now to silence Bush's critics. Bush is getting away with murder -- just like Clinton did. See? That's how insidious the right-wing modus operandi is. Even I bought into the Clinton murder thing there for a second. And that's my point. We have to be vigilant.

"And we have to be more than vigilant. We have to fight back ... Let's call them what they are: liars. Lying, lying liars."

Al Franken for president. Or at least governor.