Bark if you love Howard Dean!

They can't vote, debate or even read. But that isn't stopping political Fidos from endorsing The Doctor for president. 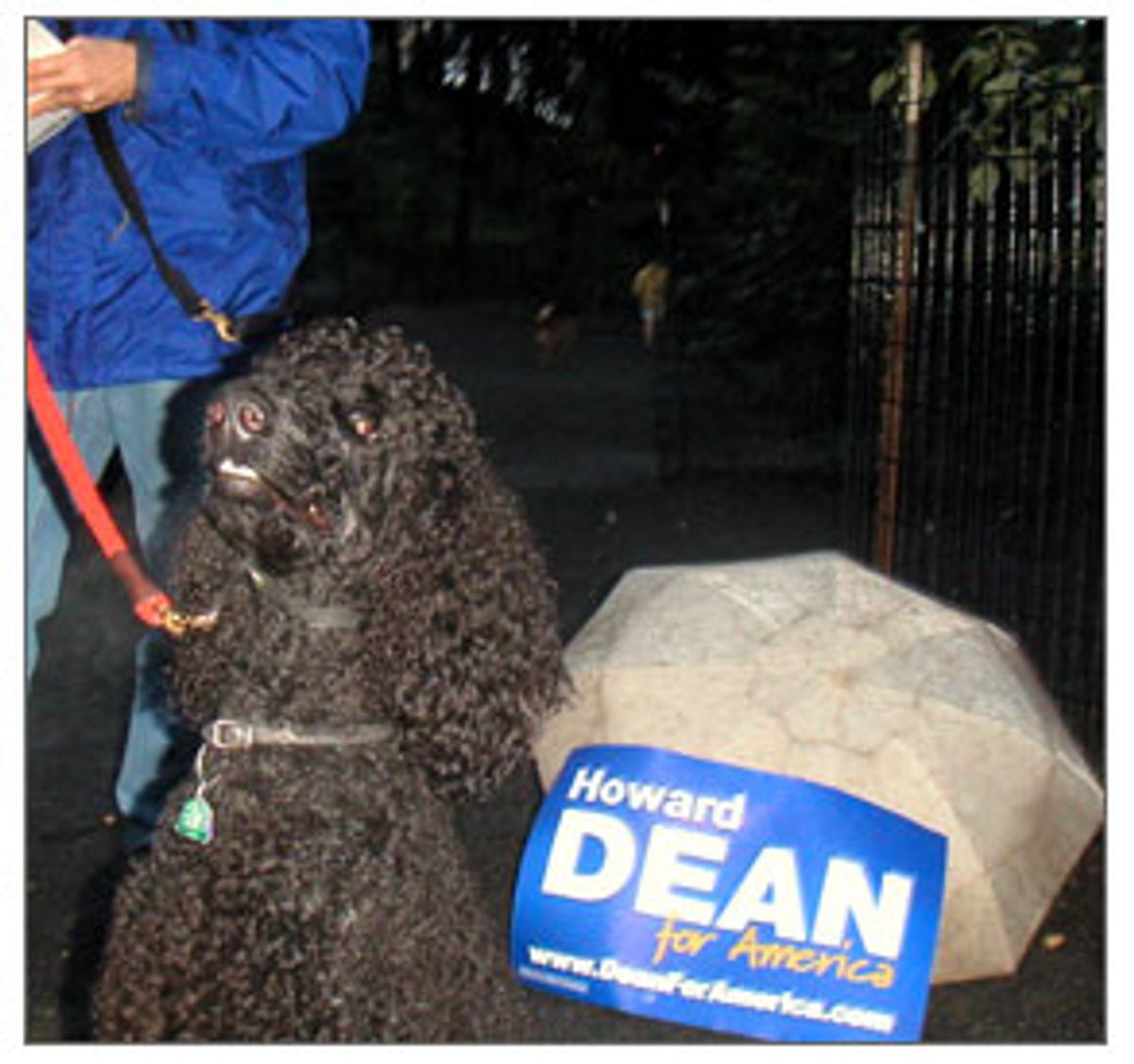 Presidential dogs never had it so good. A big lawn for Checkers (president: Nixon; breed: cocker spaniel). A Rose Garden for Him and Her (Johnson; beagles). Air Force One for Barney and Spot (George W.; spaniel, Scottie). But while a handful of privileged beasts have wandered the halls of the White House, the rest of the dogs -- the hounds of the people -- have made their own political mark. Yesterday, for example, a few fleabags at the West 87th Street dog run, in Manhattan, weren't just chasing balls or razzing squirrels in the rain. They were devoting their coveted playtime to Dogs for Dean, the small but hearty wing of the Howard Dean for America presidential campaign, whose constituents are made up of, yes, Canis familiaris and the Homo sapiens who walk and feed them.

"She's definitely smart," said Matt Gomillion, a mild-mannered anesthesiologist, of his standard poodle, Lola, who stood by his side, panting. "Yeah, she's pretty liberal." If Lola, who is 7 years old and weighs about 55 pounds, were to someday land in Washington, Gomillion surmised, "She'd be first lady. But she's got a funky skin disorder; she'd need to get a hair transplant." Lola seemed indifferent. She sniffed the air.

Henry, Lola's fellow canine volunteer, is also a standard poodle, but with healthy black ringlets, a pompom for a tail, and a decidedly more political past. His owner, Beverly Chassler, a 60-ish Upper West Sider who helps resettle refugees, explained that Henry fell into her lap when her daughter, "distressed as she was by the Bush administration's business, took her baby and her husband and moved to Scotland." No child left behind; just 56 pounds of excitable flesh and fur. "I try to make him political," said Chassler. If Henry were to go into politics, she believes he'd be "some sort of hatchet man."

As the rain pattered and the West Side Highway thrummed, Henry, Lola, Beverly and Matt frolicked and talked politics, respectively. James Armstrong, the 28-year-old Dean for America volunteer in charge of the event (no dog, but he brought a Snoopy doll, because "Snoopy's for Howard Dean!"), kept the dialogue buzzing. The tone was serious-casual, which typifies the vibe at other Howard Dean MeetUp events, most of which are advertised on the Dean Web site, and held at bars or cafes. They aim to revive what participants call "the Great American Conversation."

"If Dean becomes president we can get our economy back," said Armstrong, as a lightning-quick Jack Russell whizzed by. "When that happens, dogs can eat dog food instead of people having to eat dog food." "I have a problem with his stance on the death penalty," said Chassler (Dean's for it). "[But] I like Howard Dean because he will tell me the truth as he sees it -- at least most of the time." A second Jack Russell joined the chase. And so it continued. The humans shared their political thoughts and worries (Iraq quagmire, the environment, unilateralism, bad information about WMD). The dogs shared the occasional tennis ball or stick or blood lust for a passing squirrel.

After an hour, the rain let up, and the Dogs for Dean pack grew slightly. Ira Hayes, owner of one of the aforementioned speedy Jack Russells (name: Higgins; age: 2), stopped by to see what was going on. "I can't stand Bush, and I'd vote for anybody who could beat him," he said. Hayes guessed that his muscular terrier would be lousy inside the Beltway. "He'd be the Pied Piper. They wouldn't give him a real job. He's too joyous." As for his own politics, Hayes told the group he's just "listening and processing it all." He said he'd check out the Web site.

Even some non-dog owners showed up. Mary Workman, a teacher from California, recently joined the Dean campaign because she "can't understand how it's not clear to everyone" that the Bush administration is up to no good. "Look at Bush's whole postwar, flight-suit, aircraft-carrier scenario," she said. "It's so 'Wag the Dog.'"

Despite his endorsement from canines and their owners, Howard Dean is not a dog owner. He has a three-legged cat named Katie, but his staff is quick to point out that "the governor also likes dogs, and believes in equal rights for all animals." At the moment, the best-known pooch in the Dean camp is a West Highland terrier named Kasey, who belongs to a staffer at headquarters in Burlington, Vt., and knows one political trick. It goes like this: A human will say, "Kasey, would you rather work for George Bush or be dead?" Kasey then rolls over and strikes her best corpse pose. But Vermont is a far cry from Pennsylvania Ave., which means the honor of Most-Political Canines still goes to Barney and Spot. Some Dean supporters, however, suggest that said spaniel and terrier aren't necessarily thrilled with the arrangement. "When Bush gets off the plane, he has to carry Spot," said Leslie, a Manhattan psychologist who stopped by the event. "You know why? Because if he put the dog down it would run away."

Eventually the sky grew dark, and the people and dogs went home.