This lazy, lurid saga starring Macaulay Culkin as '90s club kid-turned-killer Michael Alig is horrible, all right. But not for the reasons its creators think. 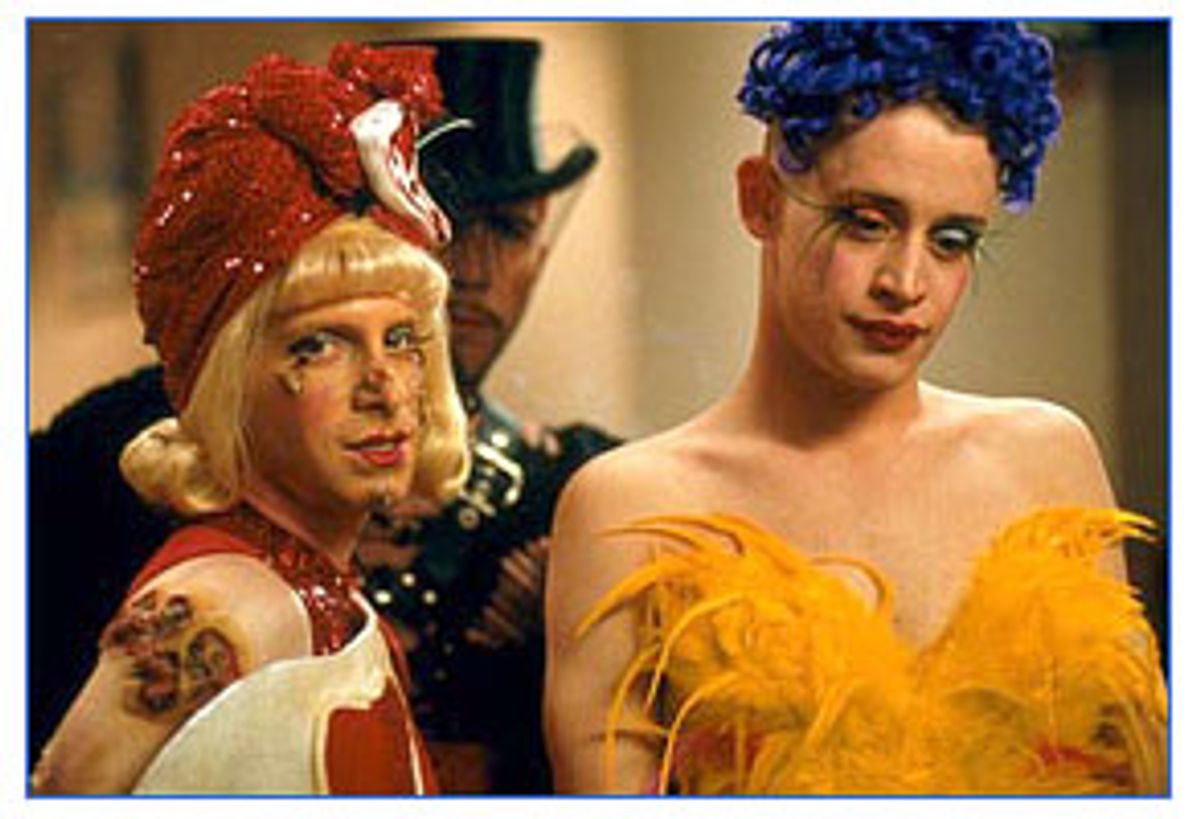 Do you think that Bret Easton Ellis is an important voice in American fiction? Do you wait breathlessly for Michael Musto's Village Voice column each week? Do you spend hundreds of dollars every month on glossy magazines so you can see who went to which parties? Have you been longing for pissy little queens to return to the movies, albeit with a blasé, post-Warhol veneer? Then, darling, "Party Monster" is for you!

The movie is the story of the rise and predictable fall of Michael Alig, the New York club kid of the '90s who had his 15 minutes and then, for a second act, bashed in the head of his drug-dealer lover with a hammer. (When that didn't do the trick, Alig suffocated him and injected him with Drano.) It's about how Alig, as a nobody just arrived in Manhattan, glommed onto James St. James, another self-created scenester, and, stealing ideas and styles from him, eclipsed his mentor. It's also unwatchable. If I hadn't had a professional obligation to stay until the end, I'd have disappeared faster than the coke that's snorted up Alig's nose.

"Party Monster" is based on the book St. James wrote about Alig, "Disco Bloodbath," and on the documentary that was also called "Party Monster" and was directed, like this film, by Fenton Bailey and Randy Barbato ("The Eyes of Tammy Faye"). The press materials provided for the movie suggest why Bailey and Barbato would be drawn to a self-promoter like Alig. The first paragraph of their bio is a classic of fatuousness:

"Award-winning film directors Fenton Bailey and Randy Barbato once had a band called the Pop Tarts and still feel the name describes their unashamed passion for all aspects of popular culture. But while delighting in the fusion (or confusion) of highbrow and lowbrow in today's society, they are also moved to make films about people both marginalized and misunderstood by the media."

How exactly was Michael Alig marginalized? Here's a kid who comes out of nowhere, worms his way into New York nightlife and convinces Peter Gatien (Dylan McDermott, the closest thing to a human being in the movie), founder of the nightclub Limelight, to bankroll his unprofitable parties -- all while living in an apartment on Gatien's dime and, if the movie is to be trusted, getting his benefactor thoroughly fucked up on drugs. He neglects his cat so much it dies. He pisses into a champagne glass and serves it to a rival. Do Bailey and Barbato think Alig was misunderstood because he was gay? In New York? In the '90s? They make fun of that attitude near the beginning when Alig recounts (quite proudly) that he was seduced by his Sunday school teacher. But finally the movie really wants to portray Alig as a Poor Little Mary lost in the big bad city.

Also from the production notes:

"Instead of demonizing Michael as a freakish killer, 'Party Monster' creates a very real connection between him and the audience. 'When we look into his heart, we are looking into our own,' continues Bailey. 'Who has not at some point in their lives wished that they could stay young forever or wished that they did not have to get out of bed in the morning and go to work?' To quote Austin Powers, 'I'd like a solid-gold toilet but it's not going to happen.'"

Shot by Teodoro Maniaci, "Party Monster" looks as atrocious as most digital video, blurred and hazy with the garishness of the colors and costumes only emphasizing how washed out everything appears. You have to wonder about directors who speak out against treating Alig's Goth-queer style as freakish when they've done everything they can to make the people in the movie look like freaks (as well as shooting fat women in diners to look as grotesque as possible).

Macaulay Culkin, who purses his oversize lips and prances through the movie in short shorts, has been cast as Alig precisely for his freak appeal, for the sheer scandal of seeing Mr. "Home Alone" swish around as a drugged-out gay killer. (Interestingly, though, the directors cut away before Culkin has to kiss any guys.) It's an insufferable display -- you can't call it a performance. Similarly, Marilyn Manson has been cast as a transvestite club habitué and does nothing more than groan and coo and show his lipstick-smeared teeth.

Inevitably, in a movie devoted to scene-makers, Chloë Sevigny (who had better decide whether she wants to be an actress or a sideshow) shows up as a girl who drifts into Alig's orbit, and so does Natasha Lyonne, padded in a fat suit with pierced lips, Ingrid Sischy glasses and ropes of black hair. But then, "Party Monster" is the kind of movie in which it doesn't pay to be a talented actor. Seth Green, as James St. James, succumbs to the freakazoid atmosphere and executes a turn nearly as bad as Culkin's. So does Diana Scarwid as Alig's mother.

Obviously, Bailey and Barbato think there's something significant going on in this dull, sordid tale -- a look at a corner of gay culture or a glimpse into what passes for a counterculture. Or something. But what they've done is to play right into Alig's narcissism and given him yet another few minutes in the spotlight. If they really believe that style counts this much, even for killers, then they'd have to acknowledge that given half a chance, Leopold and Loeb wouldn't have hesitated to take out this showboating little shit.