Democrats who gave Bush a blank check on Iraq in Congress but attacked him in Albuquerque might have to step aside for the good of the party, and the world. 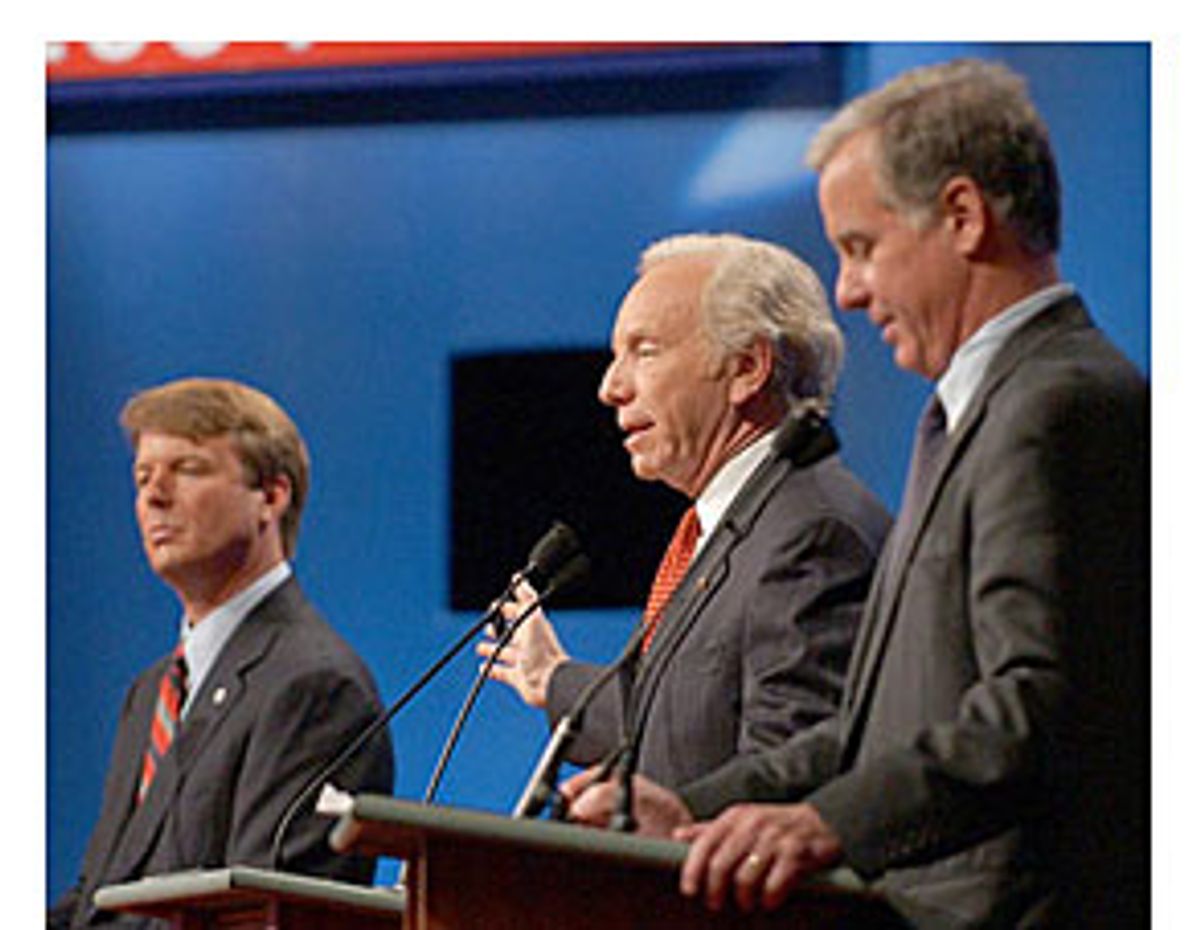 I never agree with Charles Krauthammer, but I really had to grapple with his Friday column, assessing Sen. John Kerry's failure to catch fire with Democratic voters this year. The dark, dyspeptic Krauthammer is of course rooting for Kerry and all Democrats to fail, so you have to read the column that way. But he put his finger on Kerry's toughest task: trying to act as if he always opposed the Iraq war, even though he gave Bush a blank check to wage it. In his campaign kickoff Tuesday, Krauthammer noted, Kerry "claimed that he had voted just to 'threaten' war with Iraq, which is an odd way to characterize voting in favor of a resolution that explicitly authorizes the president to go to war if and when he pleases."

Thursday night's debate raised the same tough issue for all the Democratic presidential candidates. It may well be looked back upon as a turning point for the party, when even its most pro-war contenders savaged the president's increasingly disastrous war against Iraq. But even for a Democrat, the scene was a little unsettling. Relative hawks Rep. Dick Gephardt and Sen. Joe Lieberman were attacking Bush's war, even though last year, they tried to set themselves apart from more dovish Dems by enthusiastically defending it. And Kerry and Sen. John Edwards, whose support was more nuanced but whose congressional votes for Bush's blank check last October counted just the same, joined them in the Bush-bashing.

I thought the pile-on was unseemly -- and again, yes, I'm a Democrat. Come January, if Bush has repaired Iraq, front-runner and war critic Howard Dean might have to head home. But if Iraq is as sad and bloody as it seems today, everyone who voted for this war might have to pack their bags and turn their war chests over to the war opponents, for the good of the party, and the world, and their souls.

Let's be honest: When war supporter Gephardt attacked Bush's Iraq performance Thursday night -- "It's incomprehensible that we would wind up in this situation without a plan and without international cooperation to get this done" -- it was a little bewildering. Frankly, I found it equally incomprehensible how someone could support the war as Gephardt did, and now pretend that he didn't know the president had no plan and no international cooperation to get it done. I knew that, sitting behind my desk in San Francisco, raising my teenage daughter. Why didn't anyone tell Gephardt, the savvy House minority leader?

I'm still feeling bad for John Kerry. I think he's a better candidate than he's shown us. But Kerry too is going to have a hard time shaking his completely political bet-hedging vote on Iraq. (As would pro-war Sen. Hillary Clinton if her hardcore supporters succeeded, as they won't, in pulling her into this race now.)

There's still a worthwhile debate here: Kerry insists we should increase troop strength by adding international forces, not more Americans; I think that's Dean's position, too, though it's being debated, while Lieberman says we should send more American soldiers, regardless of what the rest of the world does. Lefty Dennis Kucinich says, without evidence, that it's time "to bring our troops home," not saying what he'd do to contain the firestorm of Islamic terror and oppression that would follow. But Kucinich doesn't seem to expect to be president. Anyone who does knows we can't pull out now. Yet engaging the rest of the world in finishing what Bush started is the country's most urgent problem, and nobody should expect it will be easy, even if a Democrat were to be given the job tomorrow.

I think the Democrats would do far better than Bush in engaging an international coalition as needed, so I hope they topple him. But as the campaign unfolds, I have a modest proposal. I think the folks who supported the war should be forced to sit down on "60 Minutes" for a mea culpa chat as humiliating and yet character-building as the one Bill Clinton endured after the Gennifer Flowers revelation in 1992. They'd have to confess to their faithlessness and bad judgment in voting for the Iraq war, and promise to try to be true to the American people from now on. Hillary Clinton might have to show up too, but this time she'd be the hang-dog bad guy, not the wronged party. It would be good for her, good for the party and good for the nation.

But until that happens, pro-war Democrats need to show a little humility about their pro-Bush vote last October. If they really want to challenge Howard Dean, some unorthodox, unexpected honesty might be the place to start.