Can this marriage be saved?

MTV's "Newlyweds" serves up a riveting spectacle of jealousy, cluelessness and raw onions with its running battle between popster Jessica Simpson and boy-band hubby Nick Lachey. 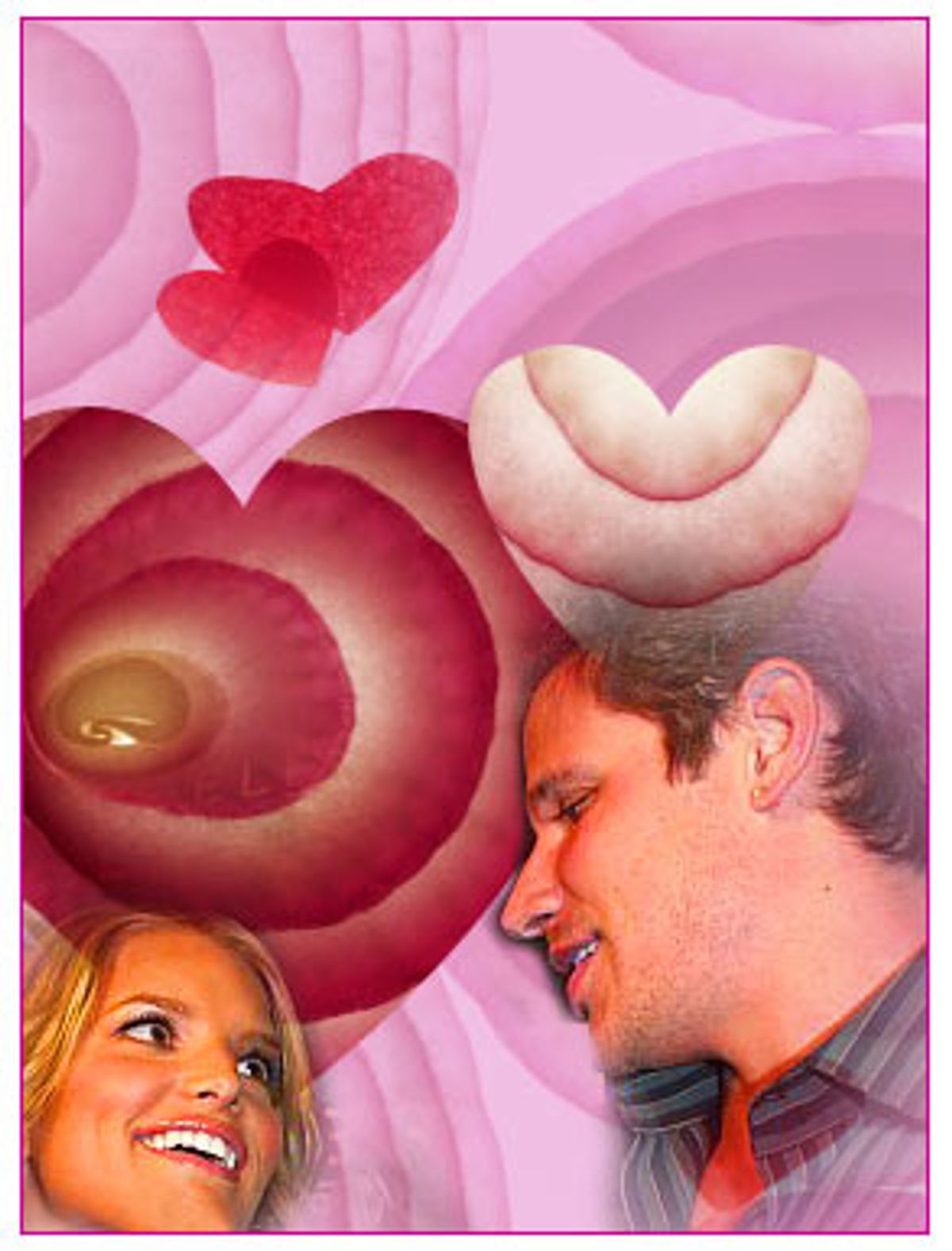 Americans are hopelessly romantic about marriage. Little girls grow up daydreaming about their weddings, believing that their lives from that special day forward will be summed up with the phrase "happily ever after," when the truth is much uglier and more complicated and often includes words like "debt consolidation," "ectopic pregnancy" and "compulsive infidelity."

For those of us who've sidestepped enough flawed long-term relationships to adjust our expectations considerably, transforming ourselves from dreamy princesses in white to financially solvent pragmatists in sensible shoes, the tearful monologues and soulful kisses presented in romantic comedies no longer soothe us. What we find soothing is the specter of supposedly perfect relationships dissolving into pointless bickering, reckless insults, and inconsolable sobbing.

Which is only natural, considering the fact that everyone from movie stars to mere mortals has a bad habit of describing their relationships in unnaturally glowing terms. For those of us who walk around assuming we're the only ones whose relationships are more Archie and Edith than Romeo and Juliet, seeing other couples quarrel with impunity can be a cool salve for the red-hot diaper rash of romantic disappointment.

Thus, it is with open arms that we welcome "Newlyweds: Nick and Jessica," the latest reality experiment from MTV featuring the shockingly untested marriage of pop singer Jessica Simpson and Nick Lachey, former member of the boy band 98 Degrees. Far from the shots of matrimonial bliss through a Vaseline-smeared lens that you'd expect from the title, "Newlyweds" lets all the insecurity and clashes and shocking revelations play out, to the unmitigated delight of viewers at home. Not only do the oddly unguarded squabbles and tense silences dished up by Simpson and Lachey never fail to prove entertaining, they can make even old married couples feel grateful to be past the point of unwelcome surprises.

Thrillingly enough, Simpson and Lachey don't seem to know each other well at all, despite having dated for three years. The honeymoon seems to be ending as the cameras roll, and there's something absolutely mesmerizing about watching these two stare at each other in shock, wondering who replaced Dream Barbie or Dream Ken with such a crabby, impatient jerk. "Being married is definitely everything I thought it would be, but it's different, too," Simpson remarks. "It's not the fairy tale. It's not like you're having picnics every day." Indeed! At least not unless you're homeless.

Simpson fulfills her role as the high-maintenance wife so convincingly, she's sure to inspire cold feet among countless engaged men nationwide. Not only is she unrealistic in her demands on her new husband, but she seems to seek out trouble at every turn. She shows up at the studio where she knows Lachey is auditioning hot female dancers and glares at the girls as they gyrate around her husband.

Later, Simpson retreats to a lingerie store in the hopes of finding something sexy to get her man's mind off those voluptuous sirens, then calls him on his cellphone, distraught, when she discovers that she's just spent $750 on two bras and two pairs of panties that she can't return or exchange. In a sitcom scene out of every little green monster's nightmare, Lachey is forced to take a minute from his lunch with a gaggle of sultry dancers to quietly urge his wife to check out the price tags before she pulls out her credit card.

Despite Lachey's patience, like so many misguided young wives, Simpson treats him like a bad dog that merely needs to be trained to behave. Ever the princess, she complains when Lachey doesn't open the car door for her, and she often sits in place and makes him fetch her things -- and then gets pouty if he comments on the absurdity of her behavior. She may coax coyly, but the bottom line is that her needs come before his. Or, as my grandmother used to say, "She just wants what she wants when she wants it, the little stinker!"

To his credit, Lachey stands up to the little stinker more often than not, particularly when she's whining out of insecurity.

Simpson: "You haven't seemed half-interested in half the things I've said today."

Lachey: "Everything that's comin' out of your mouth is cryin' about something. I'm not interested in it."

Simpson: "I have not cried, or bitched! Screw you."

Later, Simpson is appalled by a brazen show of independence by her husband -- he dares to take the elevator downstairs to rehearse his act without her!

Simpson: "Screw Nick! He left without me? He didn't even say, 'Jess, I'm leaving'? Whatever. I'm over him."

Far from being over it or him, Simpson continues complaining about this blatant neglect all the way down in the elevator, and then, while Lachey is rehearsing, she stands, hands on hips, frowning at him from the audience. The episode ends absurdly with the couple singing a sugary duet together onstage. Ah, matrimonial bliss! If only we could all be as happy as Nick and Jessica!

The producers of "Newlyweds" clearly have a firm grasp on the comedy presented by these two. The clever editing and comical music choices echo the style and tone of "The Osbournes" and indeed, the two shows share many of the same producers, line producers and story editors, along with the same music supervisor, Melinda Gedman. While few would dispute that the quality of "The Osbournes" lies in the family's incomparable charms, "Newlyweds" proves that editors and producers who can craft a compelling, witty storyline from countless hours of raw footage play a crucial role in making these shows so entertaining.

In one particularly hilarious use of cross-cutting between scenes, Lachey visits his sexy dancers' hotel room as they change into costume while Simpson talks to her mom in a room a few doors down:

Simpson: "We're getting a gun."

Simpson: "For protection. He's like, 'You just gotta promise me you won't shoot me.'"

Cut to Lachey talking to dancers in their bras. Close-up on a dancer's butt with the word "Nick" written on it.

Simpson: "I'm like, 'Baby, the only time I would ever shoot you is if you cheated on me, and then I'd shoot your dick off.'"

That sounds reasonable enough, right? At least no one can say these two don't communicate openly.

Having grown up with parents who didn't ask her to so much as straighten up her room, Simpson struggles mightily with the simplest tasks, balking at cleaning spills off the floor or doing her own laundry. In one episode, the couple goes camping with Lachey's brother and his wife, and the women spend most of the trip whining about bugs and dirt, or daydreaming about the manicures, pedicures, massages and facials they're going to line up the second they get back to Los Angeles.

Home life seems to be just as taxing. "Is this chicken or fish?" Simpson asks as she eats dinner on the couch with her husband. She's confused, you see, because on the can it says, as she puts it, "Chicken by the Sea." Her husband just stares at her blankly like he can't tell if she's joking around or not. Sadly, she's not, and she quickly becomes angry at him for refusing to answer her question. Indeed, Simpson seems very sensitive about having lived under a rock all these years, and can repeatedly be heard chirping, "Don't make fun of me!"

In contrast, Lachey has done his own laundry "since he was in the third grade," according to Simpson. Instead of hiring movers, Lachey moves himself out of his condo and into the garish house he and Simpson have shared since their wedding. Simpson and her mother find this choice preposterous, of course, and sit around looking baffled as they watch him drag heavy furniture through the door. At one point, while Lachey and his brother are moving a big dresser up a long flight of stairs, Simpson yells to him from the next room.

"It's in these moments I'm glad I don't have a gun," Nick mumbles. "Because I would shoot myself." His brother responds, "Why would you shoot yourself?"

Assuming that their marriage doesn't end in bloodshed, how long can these two stubbornly hold their own ground? Simpson never seems to give up her efforts to bend Lachey to her will, and Lachey rarely backs down from the things that are important to him. Take the classic marital dilemma presented by raw onions:

Simpson: "You know you can get it without onions. Always ask to do that. You know you'll get more kisses."

Lachey: "I'm not gonna blow a good meal for a kiss!"

As henpecked husbands and raw-onion fans alike shed tears of joy at Lachey's courage in the face of oppression, we're reminded that, in the end, the health of a marriage boils down to a few simple choices: A good meal or a kiss? An endlessly whining wife or a cleaning lady? One night of passion with a hot stranger or the family jewels?

Even with such telling moments captured on camera for all eternity, it's impossible to tell where Lachey and Simpson's marriage is headed. Will the relationship become more solid as Simpson learns to enjoy camping, folding her own laundry and delaying gratification, almost like a real live adult? Or will the marriage crumble under the strain of their differences, devolving into alienation and contemptuous outbursts? Either way, we can only hope that cameras are rolling on that fateful day when the picnics come to an end.