Attorney General John Ashcroft takes his weird "we must save the USA PATRIOT Act" roadshow to New York. He's finding it a much tougher sell now than it was six weeks after 9/11. 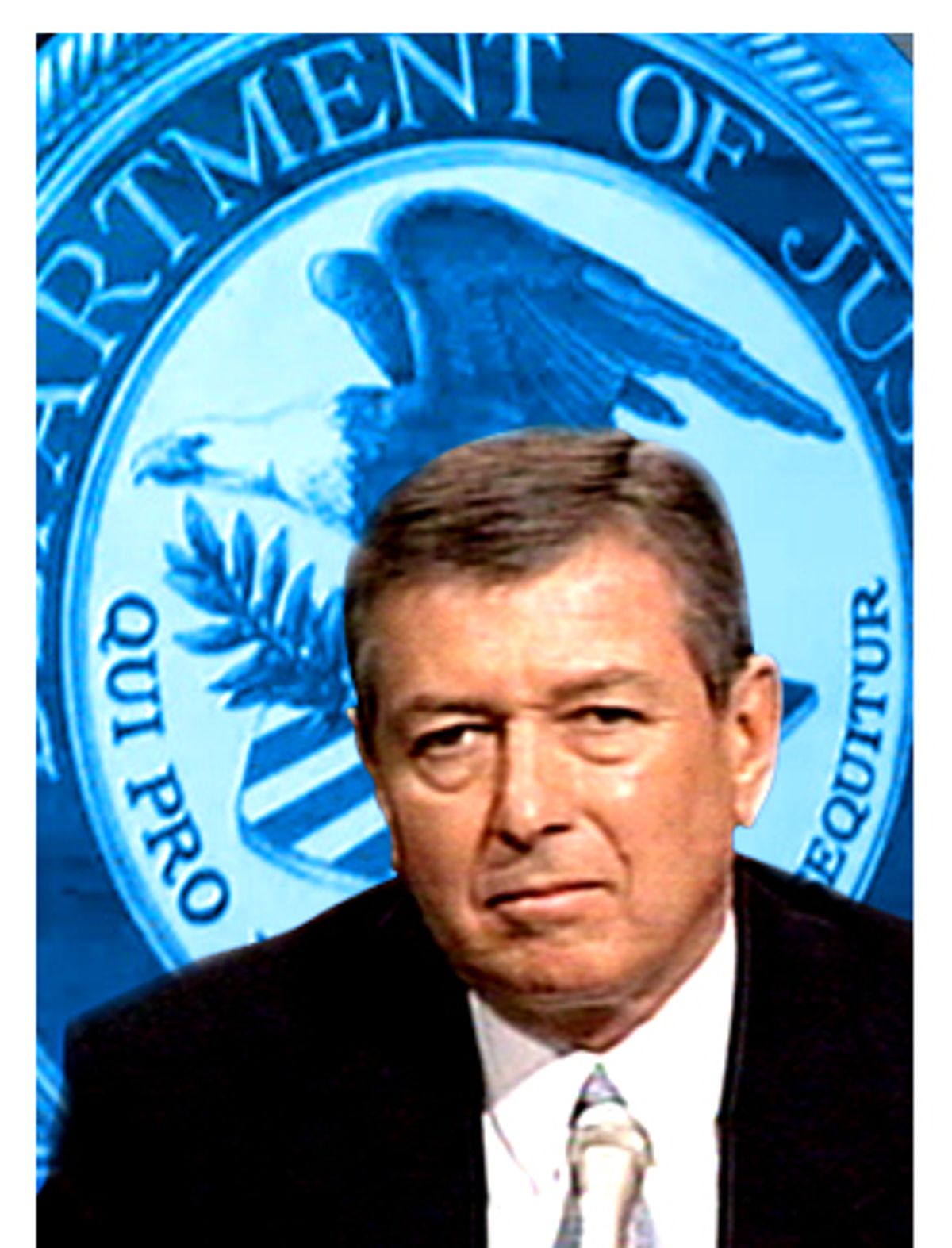 New York's Federal Hall is where George Washington was inaugurated, where America's first Congress wrote the Bill of Rights, and where Attorney General John Ashcroft stood on Tuesday to lecture a wary nation that its fate requires faith in the USA PATRIOT Act. His message, he assured listeners, was "worthy of this setting."

In a blue suit and blue tie, backed by nine American flags, Ashcroft told a small invited crowd of law enforcement professionals, "It is critical for America to understand that the PATRIOT Act is vital to our success in the war on terrorism." He implied that those who oppose this crucial tool have forgotten what it was like on Sept. 11, "when New York was hallowed by the blood of innocents. It's already become difficult for some Americans to remember the shock." He wanted to remind them.

The speech was the last stop on a three-week multi-city tour that critics have called Ashcroft's "secret roadshow." Though the audience was polite (if hardly enthusiastic) and the lunchtime throng of protesters relatively small, Ashcroft seemed an oddly diminished figure on the stage, far from the stern behemoth who steamrollered all opposition in the days after 9/11. His highly unusual campaign to convince Americans that his pet law is legitimate demonstrates how much he's on the defensive. So too does the strange Web site the Department of Justice has set up atwww.lifeandliberty.gov, to celebrate the PATRIOT act, which tells visitors that without the law, "The government's success in preventing another catastrophic attack on the American homeland since Sept. 11, 2001, would have been much more difficult, if not impossible."

All this is necessary because unlike Bush, Ashcroft has succeeded in bringing together people of wildly different political persuasions to fight him and his legal agenda. Right-wingers like Bob Barr and staunch liberals like Anthony Lewis alike regard the PATRIOT Act as a dangerous invasion of civil liberties -- or, as Richard Leone writes in his introduction to the new book "The War on Our Freedoms: Civil Liberties in an Age of Terrorism," "arguably the most far-reaching and invasive legislation passed since the Espionage Act of 1917 and the Sedition Act of 1918." The USA PATRIOT Act (which is short for "Uniting and Strengthening America by Providing Appropriate Tools Required to Intercept and Obstruct Terrorism") expands the government's power to access personal records (for example, individuals' library records, retail purchases and Internet searches) and conduct secret searches without probable cause. The legislation was pushed through with little opposition soon after 9/11, but since then many have reconsidered. Across the country, 155 cities and towns and three states -- Alaska, Vermont and Hawaii -- have passed resolutions opposing the PATRIOT Act. City councilman Bill Perkins has introduced a similar resolution in New York that will be voted on in the next few weeks, and a group called the New York Bill of Rights Defense Campaign has formed to fight for its passage.

Congress, too, has begun curtailing some of the attorney general's attempts to expand his power. In July, the House passed an amendment by 309-118 to remove funding for a section of the PATRIOT Act that allowed for secret "sneak and peak" searches of private property. Of those who voted for what the Justice Department angrily denounced as the "terrorist tip-off amendment," 113 were Republicans. In February, a leaked draft of the so-called PATRIOT ACT II (which, among other things, would have provided ways for the government to strip Americans of their nationality and thus their rights as citizens) sparked condemnations from Bill O'Reilly and representatives of the right-wing Eagle Forum and American Conservative Union. That bodes ill for the VICTORY (Vital Interdiction of Criminal Terrorist Organizations) Act, which further expands the attorney general's powers by allowing his office, among other things, to prosecute drug dealers as terrorists. Congress is expected to take up the bill in the fall.

In the face of such opposition, Ashcroft has taken to the road to try to convince America of two somewhat contradictory propositions. On the one hand, he argues that without the PATRIOT Act, the government cannot protect Americans from terrorist atrocities. On the other, he insists that the PATRIOT Act contains only "modest, incremental changes in the law." Apparently, the PATRIOT Act is both crucial and negligible.

In New York, as he has elsewhere, Ashcroft argued that the PATRIOT Act simply allows investigators to use the same tools to fight terrorism that were already available to combat drugs and organized crime. "Most Americans expect that law enforcement tools used for decades to fight organized crime and drugs be available to protect lives and liberties from terrorists," he said.

As an example of the act's effectiveness, Ashcroft touted the bust of the arms dealer Hemant Lakhani this summer. "Lakhani is charged with attempting to sell shoulder-fired missiles to terrorists for use against American targets," he said. "I think all Americans understand the devastation such a missile is capable of inflicting on a commercial airliner." Lakhani was arrested "as he allegedly prepared to finalize the sale of the first missile," Ashcroft said, neglecting to mention that the both the buyers and sellers of said missiles were undercover agents -- there were never any terrorists involved at all.

The devoutly Christian Ashcroft ended by invoking "Providence which has bestowed upon America the ability to lead the world in liberty." The assembled New Yorkers, some in police uniforms, others in suits, clapped politely, but they remained in their seats until, after several awkward moments, one of their number stood up and the rest tentatively followed.

Outside, two officers stood watching a quartet of men in "Stop The Police State" T-shirts screaming about Bush and Hitler. What did the policemen think of Ashcroft? One shook his head, but just barely. The other said flatly, "I thought it was good," to which the first deadpanned "I'll concur," with a wry half-smile. They declined to offer further encomiums.

Most of the protesters were cordoned off a block away from the door where Ashcroft's audience entered and exited, so there was no interaction between them. Representatives of the American Civil Liberties Union, People for the American Way, United for Peace and Justice and the New York City Bill of Rights Defense Campaign had called the rally, and 100 to 200 people stood around chanting and holding signs with slogans like "Dissent is Patriotic," but, as is so often true, the people with the biggest banners were those accusing Bush of planning Sept. 11 as a pretext for war with Afghanistan and replacing the "S" in his name with a swastika.

As Ashcroft's audience filed out, a black-haired poetess was howling into a microphone like a cut-rate P.J. Harvey. "I'm in a rogue state, papa Ashcroft," she wailed, dragging out the words "rogue state" over and over as if they were slicing up her vocal chords. "The National Missile Defense System got nothing on me/ I can pierce through the genome project with cyborg vitality." Watching her, a few office workers on their lunch hour seemed mildly amused.

More accessible was the Rev. Peter Laarman of Judson Memorial Church, a longtime civil rights activist who spoke of how the attorney general insulted the very landmark he purported to honor. "We are in danger of losing our own history, of losing the achievement that is America, and I place the blame squarely at the feet of Attorney General John Ashcroft," Laarman said.

Ashcroft's problem is that increasingly it's not only progressives like Laarman who feel that way.