File sharing isn't just a problem for the music industry. It's a threat to anyone who depends upon intellectual property for a living. 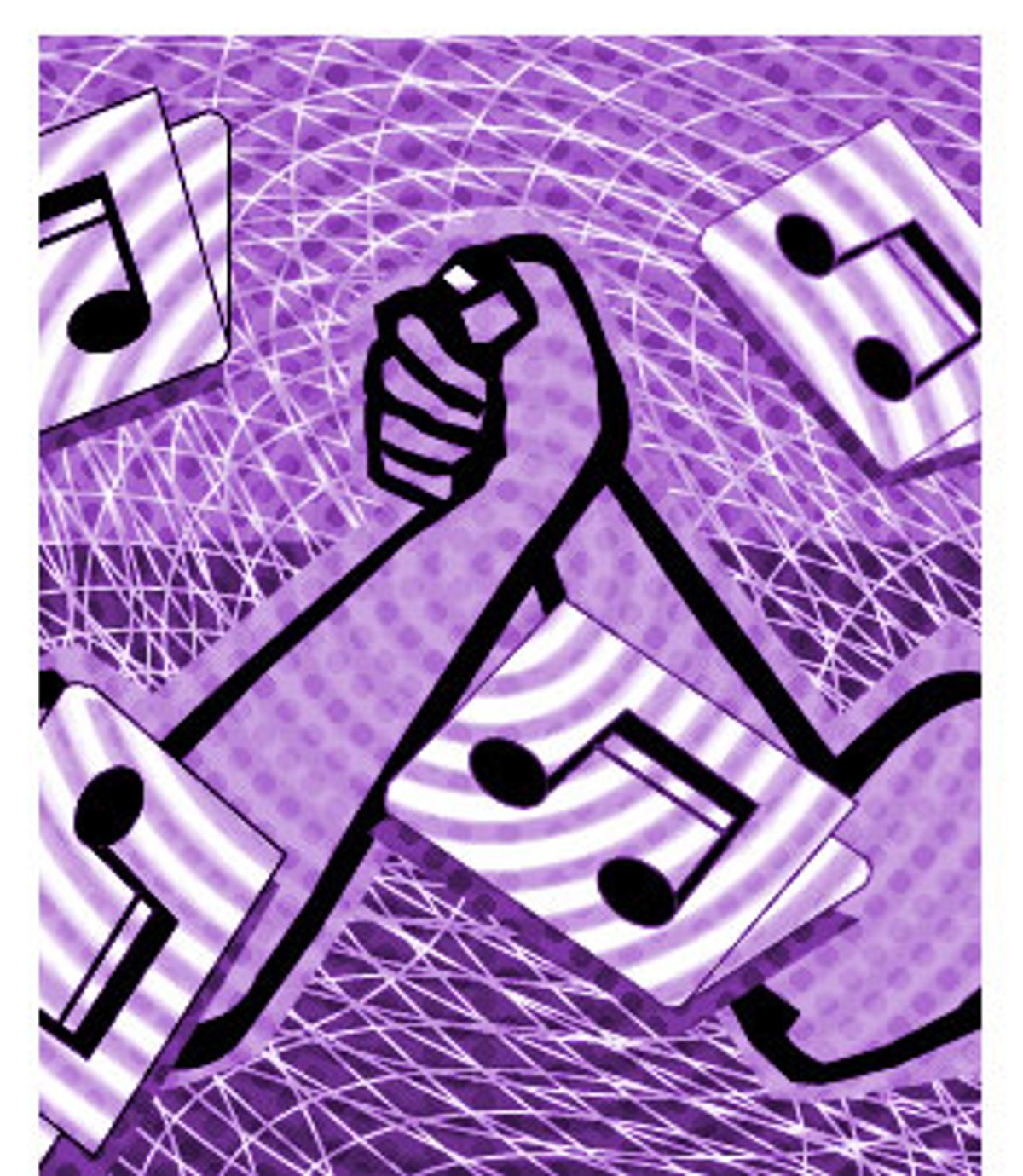 As the record industry prepares hundreds of lawsuits targeting people suspected of illegally copying music over the Internet, a broad coalition of leading academics and civil libertarians is standing up for "file sharing" with the intention of ushering in a new copyright system.

Case in point: The Electronic Frontier Foundation, longtime defender of free speech and privacy online, is sponsoring an advertising campaign with the slogan "File Sharing: It's Music to Our Ears." Seeking to recruit new members who are "tired of being treated like a criminal for sharing music online," the ad's message is clear: It's cool to copy music, regardless of the copyright status.

The EFF's goal, like that of many legal scholars, software coders and media pundits, is a new system of compensation for copyright holders that would legitimize file sharing, generally through some new tax on Internet use that would be redistributed to content creators.

But the tacit endorsement of copyright violation seems intended to force the change rather than open it to debate: The more people engage in file sharing, the stronger the case that it can't be stopped, and that our current system of copyright must therefore be scrapped.

This is a bad idea propagated in bad faith. Rather than cheering on file sharing, the EFF should be presenting us with the details of its alternative so that we can measure it against our current copyright system, and collectively decide which system we prefer.

The major record companies -- mostly in the guise of their lobbying group, the Recording Industry Association of America, or RIAA -- have been widely criticized as being heavy-handed in their response to file sharing. But the tactics and goals of those leading the charge against them have generally avoided scrutiny. It's time to take a closer look.

Music industry critics would have us believe that their objective is to rein in an evil cartel, but there's much more to it than that. Their intention is to dictate new terms to all digital authors, regardless of whether they are working for an oligopoly or toiling away in a garage.

As an independent software developer, I don't much appreciate the effort to recast copying others' work as a cool and revolutionary act. What's worse, civil liberties advocates are promoting alternative systems that compromise free speech and privacy, bedrock principles that we have traditionally relied on them to defend.

The first thing to note is that this debate isn't just about music, it is about copyright in general. All leading file-sharing applications are designed to copy any kind of file. If the goal is to legitimize the activity over these peer-to-peer (P2P) networks through a new tax, then we should expect such a system to apply to all digital works -- not just music, but also movies, software, photographs, ebooks and so on.

So how is free speech compromised?

Under these alternative systems, compensation for cultural expression is shifted to governmental control -- the government collects the tax, divides it up, and pays the artists. But this is also the same government that has a long record of denying public funding for "offensive" art.

As a simple example, consider that pornography makes up as much as 40 percent of file-sharing traffic. Are we to believe that those copyright holders would receive their proportionate share of the P2P tax? It seems far more likely that the government will instead decide to exclude "adult" works, drawing a line between art and offense.

There is no reason to believe that the First Amendment would apply here -- after all, nothing would be stopping such works from being exchanged over file-sharing networks. It's just that the government isn't going to pay the author when they are. And since it is not possible to remove the corresponding works from file-sharing networks, such a system further marginalizes the economic opportunity of fringe artists.

This is a genuine free-speech concern, and music industry critics should address it with something better than their reflexive mantra: "Well, the RIAA sucks."

Free speech isn't the only traditional value that civil liberties advocates compromise with the alternative copyright systems that they propose -- privacy takes a beating too.

One of the leading goals of these alternative systems is to better compensate underrepresented works, and that sounds great. But in order to account for every song -- not to mention every movie, photograph, software program and so on -- the government would have to create a vast technical oversight system to track Internet use.

Some argue for a limited statistical sample, but think about the math: To statistically "notice" those less-popular, nonmainstream works you would have to sample the habits of a huge population, if not the entire population. This cannot be a relatively simple, Nielsen-type analysis of 100 TV channels, nor would it be at all analogous to the current system that now tracks what plays on the radio; it's an ongoing record of how we use the Internet.

Next, remember that this isn't just about music and ask yourself: Do you want the government to have access to a running record of what you listen to, what you look at, what you have, what you know? If, alternatively, the intention is to somehow make these records truly anonymous, there would be no way to detect efforts that artificially boost the popularity -- and corresponding compensation -- of a particular work.

This is exactly the sort of privacy threat that civil libertarians should be concerned about. Oddly, the traditional watchdogs of privacy are now embracing the very attitude that they typically warn us about: "Trust us." Gee, no thanks.

To avoid the specter of government control, the EFF and others sometimes call for a "voluntary" solution. Such rhetoric sounds nice, but clearly the record companies would have to be forced into voluntarily licensing their works for P2P, and file sharers would have to be forced into voluntarily paying for it. And music fans can already get music from licensed sources, including Rhapsody, EMusic, Apple's iTunes Music Store, CD Baby and others.

There may indeed be a better way to compensate digital authors, but we deserve a chance to debate the details and choose between alternatives, including our current system of copyright. The tiresome "RIAA vs. freedom" spin oversimplifies the situation and distracts us from making an informed and important decision.

And the more you ask questions, and try to get answers, the more you might realize that you actually prefer the copyright system that we have now, and the less you'll appreciate the efforts to destabilize it.

Record industry critics will undoubtedly heckle as the RIAA sues people for illegally copying music, but the same copyright laws also protect lots of people like me -- independent musicians, filmmakers, programmers, authors and so on. Our lives are mixed up in this too.

The EFF and aligned academics blunder when they trade privacy and free speech for piracy and free music.