The forthcoming President Bush aviator doll is a satirist's dream. But are Americans still too frightened to laugh at their leader? 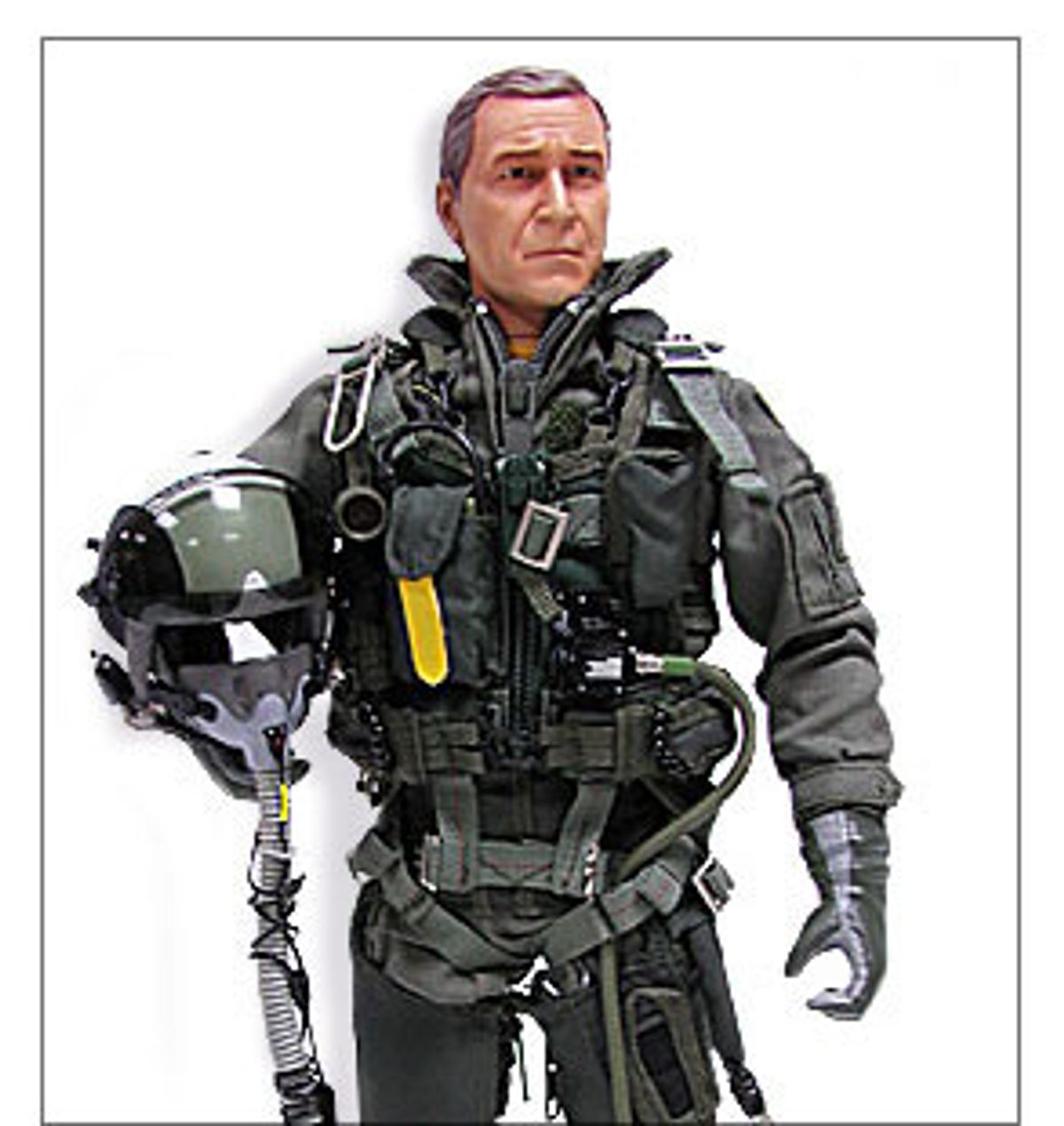 First, President Bush billed taxpayers for a campaign photo-op of himself swaggering across the deck of an aircraft carrier as if he were Will Smith after vanquishing the alien foe in "Independence Day." Now, history repeats itself as farce squared -- coming Sept. 15, a tiny Bush action figure dressed in a naval flight uniform to commemorate the original pseudo-event.

Little Bush is being billed as an "authentic" military figure in Blue Box toy company's line of "Elite Force aviators." What's next? An "authentic" plastic uranium report from Niger?

The figure invites parody, but it also raises concern heading into the 2004 elections: With machine guns and gnawing anxieties still greeting travelers as they get on planes; with blackouts triggering flashbacks; with a president inviting a new jihad against U.S. soldiers as the war drags on in Iraq, free-floating fear persists, and we may still be too terrified to laugh.

Professor Mark Crispin Miller, author of "The Bush Dyslexicon," thinks the shock of 9/11 altered the humor threshold in American culture, though temporarily. "Bush's sudden stature was based entirely on mass terror," Miller said. "Considering what had gone down, people were reluctant, understandably, even to question his policies, much less laugh at him."

For a time, the possibility of terror on American soil immunized Bush almost completely against serious satire. For months, much of the sharpest humor hit foreign targets -- cracks about Osama or Saddam -- while the president was treated to gentle one-liners about his verbal challenges. When a nation is dominated by fear, the national sense of humor suffers.

But over the past two years the comedy climate has changed. Alongside fear, satire is selling, particularly the edgier stuff geared to liberal audiences. Miller points to books like Michael Moore's "Stupid White Men" as well as his own "Bush Dyslexicon" and off- Broadway show "Are You With Me?" To this list add Al Franken's "Lies and the Lying Liars Who Tell Them: A Fair and Balanced Look at the Right," which soared to No. 1 on Amazon.com the day it was released.

Liberals yearn for something or someone with the guts to stand up to the executive branch, if only satirically. But the psychic demand for sharp-edged wit is tempered by terror and pragmatism, according to Charlie Baker, who served as the field director for Michael Dukakis' 1988 presidential campaign. "If you take the partisanship out of it, most people want the president to succeed. If you satirize him, you risk making fun of that," Baker explained. "Nobody wants things not to work out."

Baker adds that the old Republican scare tactic -- "If you criticize the president, you're being disloyal" -- contributes to a climate of fear that stifles send-ups.

Despite comedians' better efforts then, as Baker implies, when it comes to humor the nation has progressed from completely terrorized to deeply ambivalent, while the tension between fear and satire continues to vex political strategists. Fear is still a limiting factor.

What strikes people as funny is also divided along partisan lines. Baker speculated that as many people will buy the Bush action figure as a gag gift as will buy it to show their support for the president.

For their part, the toymakers over at Blue Box claim no political or humorous intent in commemorating the president's campaign stunt with an action figure: "We don't condemn or condone the Bush administration," insists publicist Lauri Aibel.

They advertise the Bush doll as a 12-inch, 1:6 scale model that features a "realistic head sculpt, fully detailed cloth flight suit, helmet with oxygen mask, survival vest, g-pants, parachute harness and much more." Priced at $39.95, the doll is aimed at collectors ages 14 and up who are interested in "U.S. history, military memorabilia and toy action figures." No mention of satire in this ad copy.

According to Aibel, George W. Bush is the first president to become a Blue Box elite action figure. "We are replicating that moment in history on May 1 when George W. Bush became a military figure," she said. In other words, the fact that George W. Bush donned military costume is itself a historic event, worthy of being "replicated" in doll form.

Mark Katz, who wrote jokes for Dukakis during the 1988 campaign and went on to work for both Bill Clinton and Al Gore, raises the relevant historical question: "Has any other president dressed up in a military uniform? I mean, while they were in office? I think this may be the first time ever."

The answer, apparently, is not since 1794, when George Washington donned his old uniform and personally led troops into Pennsylvania against the Whiskey Rebellion. According to Miller, "None of the [other] ex-generals who've served as U.S. president [Jackson, Grant, Eisenhower] would ever have donned war gear while holding that civilian office. Bush -- who never served -- did so." During Vietnam, Bush did manage to secure a coveted place in the Texas National Guard. Critics claim that even there young Bush neglected his responsibilities the year before he started at Harvard Business School in 1973.

The image is hilarious -- to a point: A doll is cast to celebrate a president for dressing up like some third-world despot. But the larger implications are more chilling: A president dons military garb while in office to whip up popular support for a war he sold through trumped-up evidence.

There are historical parallels for finding humor in this type of presidential campaign stunt, though imperfect ones. In the course of the 1988 campaign, for instance, Republicans relentlessly satirized Dukakis' appearance in a tank, comparing him to Snoopy, Charles Schulz's cartoon dog. Even though Dukakis had served his country in the Korean War, as Katz recalled, "Snoopy became the enduring visual thought from the campaign."

But unlike Bush, Dukakis was a candidate, rather than the incumbent whose policies were determining the fate of a shifting world. And the Cold War's nuclear threat, compared to terrorism, often seemed an abstract and almost theoretical concern.

Baker also points out that the Republican handlers today carefully avoid Dukakis' mistakes. The image of the candidate's helmeted head bobbling around in a tank diminished rather than enhanced his reputation. "We broke two major political rules. Never let a political figure wear a hat. And don't ever make him look little. You notice the Bush handlers make a major effort never to let him appear tiny."

Though Bush is never allowed to appear tiny, the issue about whether he seemed larger than life beneath his flight suit gave comedians a new angle. "Saturday Night Live" wondered if the president had stuffed a sock down the front of the jumpsuit. Katrina vanden Heuvel at the Nation picked up this thread in a piece poking fun at conservative Lisa Schiffren, who had salivated over the president's appearance in a Wall Street Journal opinion piece. Subtext: Bush is too cocky to be an effective leader.

Whether a satirical image of Bush playing dress-up in a flight suit plays a role in the upcoming election -- and the Republicans will insist we take the photo-op seriously -- remains to be seen. But Katz, who is finishing a new book, "Clinton and Me: A Real Life Political Comedy," believes something new (and funny) will come along to define the Bush presidency. "The original comic premise of Bush has come and gone," he said. "The next wave of humor will be about his confidence. He comes across as more confident than he should be. Bush is the kind of guy who scored 100 on his IQ test and thought he got a perfect score."

If history is any guide, there is evidence that we can still laugh at a sitting president for being inept even in moments of national crisis. The receptiveness to serious humor increases as elections draw near, and our fears abate as the possibility of replacing the president becomes palpable.

Consider the comic metaphor that contributed to Ronald Reagan's landslide victory over incumbent Jimmy Carter in 1980, even though the president was struggling to resolve a national crisis centered on an oil-rich country in the Middle East. Carter was paddling a canoe on a pond near Plains, Ga., when an angry-looking bunny charged the boat. He fended it off with a canoe paddle. In the campaign, the image of a president being attacked by a rabbit stuck, tapping into the popular view that he was unable to deal effectively with the Iranian hostage crisis.

As Miller sees it, Bush's declining numbers in the polls tells the underlying story -- our willingness to laugh follows our growing willingness to be critical. "What with the faltering economy and the daily news of more dead U.S. soldiers," Miller said, "even his erstwhile supporters are beginning to admit that they don't want to see him reelected."

As November 2004 draws closer, more uncompromising criticism becomes possible, and with it, less compromised hilarity. And perhaps when Americans have the opportunity to hold the little Bush action figure in their hands during an election year the experience will trigger some serious giggling -- just the sort of prop comedians have been searching for to help this country fully recover its sense of humor.