On the new Clooney-Soderbergh HBO series, Hollywood and Capitol Hill are in bed together, nervously prepping for their big love scene. Is this supposed to turn us on, or turn our stomachs? 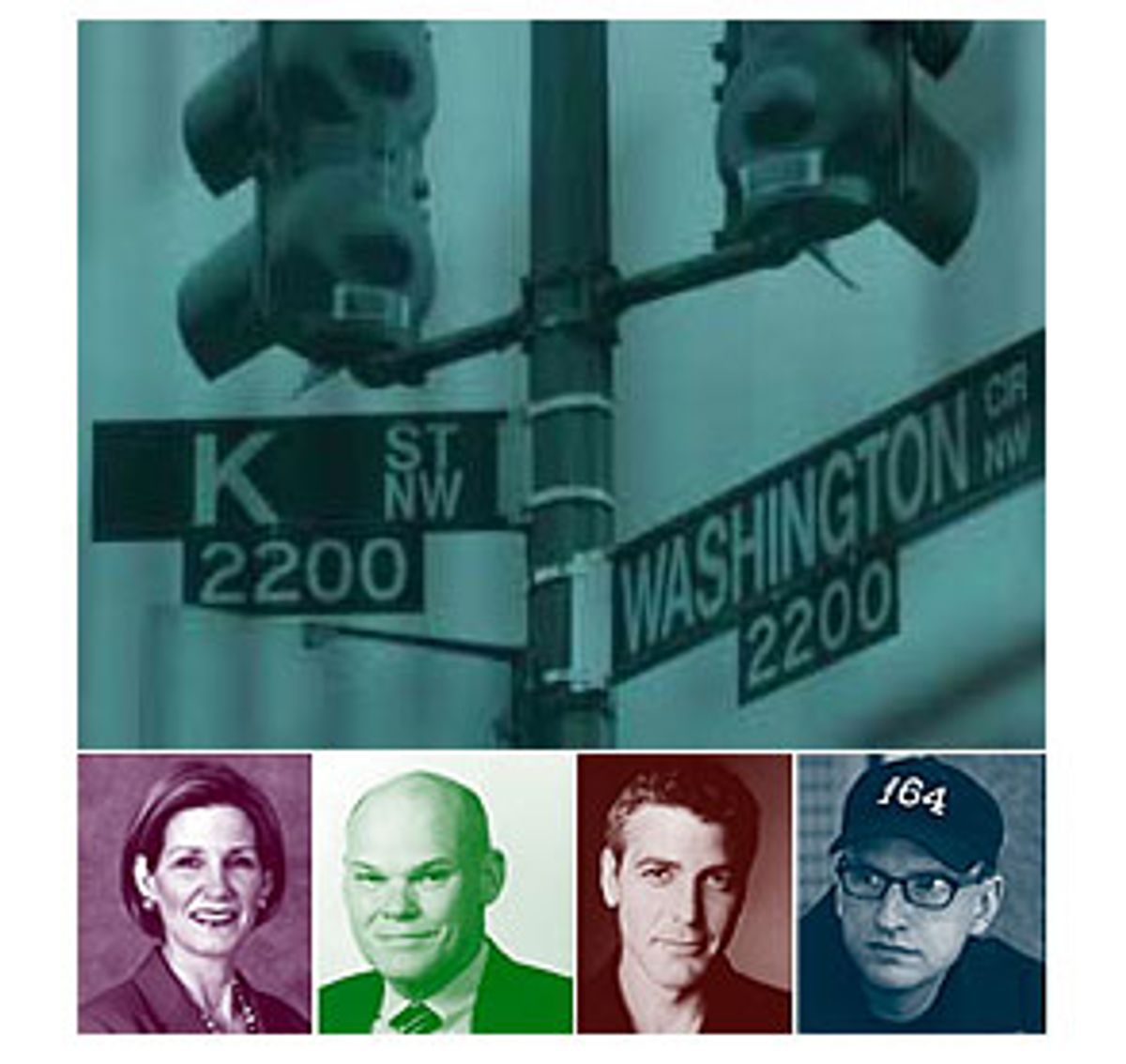 George Clooney and Steven Soderbergh don't have much trouble getting the media's attention. The swooning and curiosity that's surrounded their quasi-fictional political show for HBO, "K Street," never fails to mention Clooney's charm, wit and sparkling grin, and to lavish praise on Soderbergh, glossing over self-indulgent flops "Solaris" and "Full Frontal," and ignoring his obvious embrace of his own celebrity despite humble, "Gosh I just hate this stuff" interviews to the contrary. A few signature leading-man looks from Clooney and a little self-deprecation from Soderbergh and these two are sophisticated, talented, swashbuckling guys just crazy enough to try something new, blurring the line between politics and Hollywood (what line?) and breaking down the barriers between reality and fiction (what barriers?).

"If it doesn't work, you'll let us know," Clooney tells us over and over again with that squinty, dazzling movie-star charm of his, and we're immediately hoping that it does work, oh yes, so we can continue to daydream about jetting off to his Italian villa to drink really good wine and plan more zany pranks to play on his movie star friends.

Sure, these two are sharp and charming, and they do have courage in spades, compared to so many gutless clones in Hollywood who direct and perform and color within the lines for their daily bread. But there's something about "K Street" -- the edgier-than-thou hand-held cameras, the big, artsy symbolic moments, the way these politicians eagerly strain to play themselves on camera -- that can set your teeth on edge.

The show depicts a fictional lobbying and consulting firm in Washington, D.C., run by Mary Matalin and James Carville, playing themselves. These two and their fictional cronies, played by Mary McCormack and John Slattery, interact with real politicians and take on current issues, but, you know, they're acting ... like themselves.

Personally, I hate watching people act like themselves. There's something so awful about that little Seinfeldian grin that they get, the way they stare into their scene partner's eyes so intensely, straining to be as "100 percent natural me" as they can possibly be. When it doesn't work, there's a lot of "Ah, yep, well, no, see --" bumbling, a lot of showy stuttering ("It's so real, I'm even stuttering! I stutter just like that, sometimes!"). But when it does work, that's when things really get ugly. There's that confident tone that comes over Mary Matalin's voice, for example, that tells us she's in the groove. She's complaining about that gosh-darn husband of hers in just the sort of exasperated tone that she would if fabulous internationally known movie star George Clooney weren't sticking a hand-held camera in her face at that exact moment. That little grin registers her victory. "This is gritty, man!" it says. "I could get used to this!"

Wait just a minute. Mary Matalin, complaining about that liberal nut husband of hers? What year is this again? Is this unholy improv after all, or just some found footage from the campaign trail 10 years ago?

The sad truth is, of course, that politicians and political consultants take more naturally to this dog-and-pony show than even actors do, since they've been playing camera-ready, highly honorable versions of themselves for as long as they've been in the game. Despite being banned from filming in the Senate office buildings and in the Capitol complex in a memo from the Rules and Ethics Committee, Clooney and Soderbergh will doubtlessly find plenty of politicians anxious to play along with their little game.

The reasons to play along are clear enough, given the time Matalin, Carville and Paul Begala, for beginners, are free to lay out their big ideas and toot their own horns to their heart's content. Certainly with an election year coming up and with the chaos surrounding the recall in California, the comments and opinions of sharp political consultants like these offer plenty of insights and grist for the mill.

In a debate prep with Democratic presidential candidate Howard Dean -- which Dean agreed to partially because he was thrilled to get some free advice from two of the highest-profile political strategists in Washington -- Begala comments on one of the current president's strengths: "One of the ways that Bush is an enormously disciplined politician is he never answers hypotheticals. He doesn't entertain that option." Begala also says that the best way for Dean to "chip Bush down" is with humor. It's tough not to be interested and engaged with such slices of strategy-building.

But when the fictional elements reenter the picture, despite exceptionally clever editing, they feel awkward and inorganic. When John Slattery (actor!) tells James Carville (real political guru!) on the train, "I know I wasn't exactly firing on all pistons yesterday at the prep, but uh, it's not that easy in the room with you and Paul, you know?" it's impossible not to think, "Yeah, Slattery, Dean might not have cared so much what your thoughts were on his debating skills." After years of documentaries and press appearances, Carville looks like more of a natural in this scene than Slattery does. "Well, get your goddamn helmet on tonight because the press and people are gonna come at us," he says. "Tighten your chin strap."

The net result feels more like a fun time for our enchanting friends Clooney and Soderbergh than a carefully structured, compelling narrative work. "Look how we get to play, play, play wherever we want with whomever we want!" is the smug message of this project, echoed in every chirpy aside ("This is sooo not good." "Tighten up your jock straps!" "You're gonna be sleeping on the couch tonight!") and every extreme close-up. One minute we're inches from Begala's face, the next, we're on the ground below Carville as he paces and talks on the cellphone, in the same room with Dean and Begala, about a fictional plot point in which Matalin and McCormick, or their characters, or something like that, are running damage control on the firm's involvement with Dean. Is Dean distracted by the guy who's lying on the floor on his back, aiming a camera up at Carville's fictional conversation? Because we are.

Instead of blurring lines between fiction and reality, "K Street" sharpens them, making us so aware of the manipulations and setups and improvised moments that we can't remotely get involved in the drama. While such an awareness sort of flies in the face of the concept of the seamless, awesome magic of Hollywood entertainment, our awareness might fade as we naturally adjust to the style of the show. But the chafing truth at the center of "K Street" won't fade. Instead of presenting us with an eerie peek behind the scenes at Washington politics, Soderbergh and Clooney give us a creepy glimpse of how happy politicians are to climb into bed with Hollywood, remaining perky and aroused even as gaffers and makeup artists and merry-prankster directors circle and swoon.

Is that the whole point? Sadly, the egotism and self-indulgence of this glamorous game make it difficult to care either way.