Florida all over again?

Partisan infighting, a crucial election, dubious voting machines -- now it's California, and the Rehnquist gang may decide this one, too. 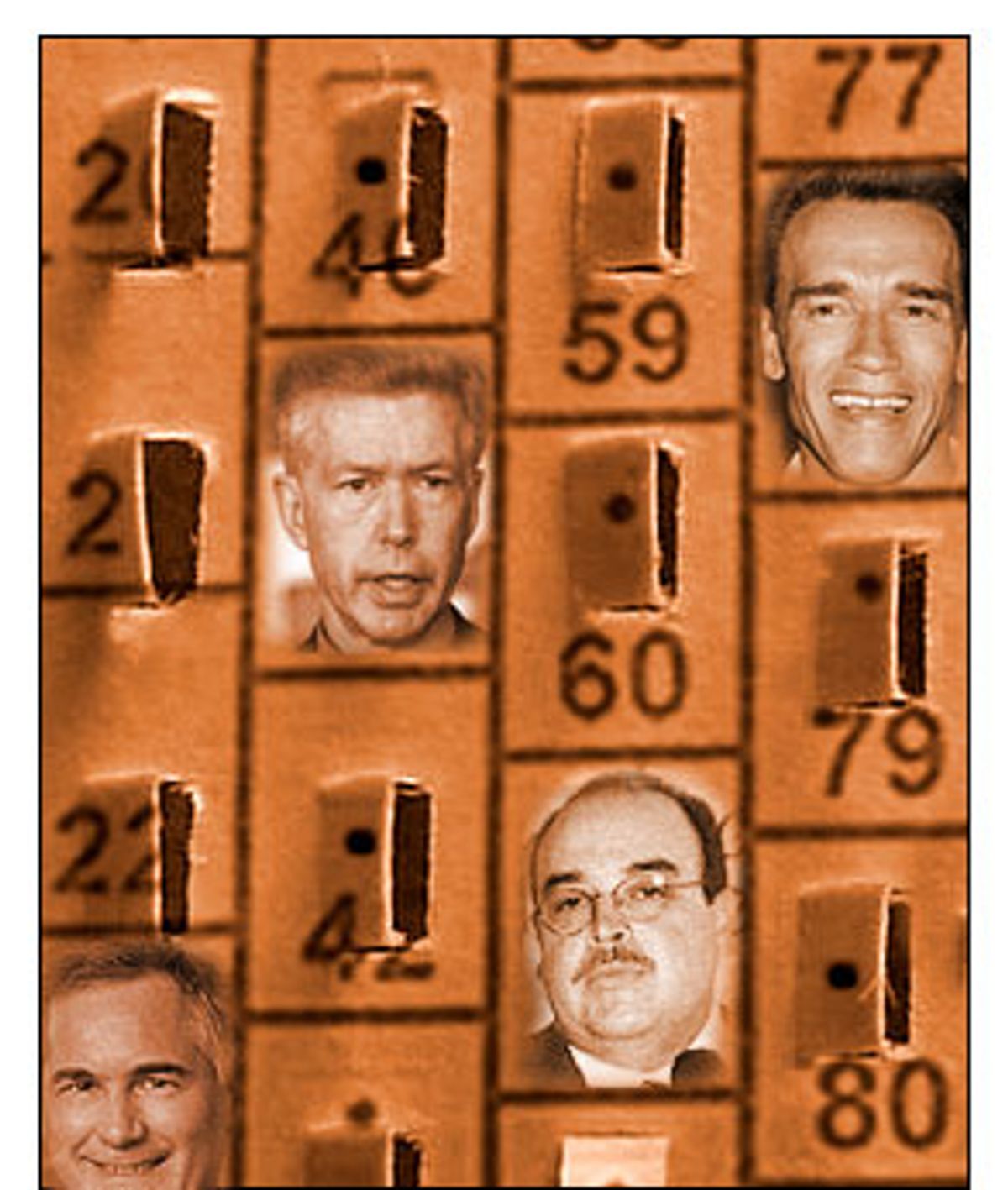 The U.S. Court of Appeals in San Francisco picked a fight with the Supreme Court Monday, and Gov. Gray Davis may prove to be the winner.

In a classic case of "what goes around comes around," three Democratic judges on the U.S. Court of Appeals for the Ninth Circuit held Monday that the Supreme Court's 2000 decision in Bush vs. Gore compelled them to postpone the Oct. 7 recall election. The reason: Punch-card voting machines -- like those that produced the hanging chads of Florida fame -- are so prone to error that voters in the six California counties that still use the machines are 2.5 times more likely to have their votes thrown out than are voters in counties with more modern balloting equipment.

Such county-by-county unfairness "presents almost precisely the same issue" the Supreme Court addressed in Bush vs. Gore, the Ninth Circuit judges held, and it must be resolved before California voters go to the polls. "The choice between a hurried, constitutionally infirm election and one held a short time later that assures voters that the rudimentary requirements of equal treatment and fundamental fairness are satisfied is clear," the judges wrote. "These issues are better resolved prophylactically than by bitter, post-election litigation over the legitimacy of the election, particularly where the margin of voting machine error may well exceed the margin of victory."

In Bush vs. Gore, one of the most controversial rulings in Supreme Court history, the nation's highest judicial body stopped the Florida recount -- and in effect handed the presidency to George W. Bush -- because it ruled that the different standards used in counting the ballots violated the Equal Protection clause of the 14th Amendment.

Recall supporters vowed to appeal the decision either to the full Ninth Circuit court or directly to the Supreme Court, and legal experts agreed that it is unlikely that Monday's ruling will stand. But either way, it appears to be a victory for Gray Davis. If the ruling survives, Davis gets more time to repair his image -- and a shot at having the election on March 2, 2004, the day that California Democrats will likely turn out in large numbers to vote in the state's presidential primary. If the ruling is reversed, the specter of Florida 2000 will be all over the recall race, reinforcing every argument that Davis has already made about the recall being a right-wing power grab in the tradition of Bush vs. Gore.

Democrats jumped on that theme immediately Monday. Ripping right into the raw wounds of 2000, Democratic Rep. Brad Sherman issued a statement Monday afternoon predicting the future machinations of White House strategist Karl Rove and conservative Supreme Court Justice Antonin Scalia. "If Karl Rove wants the election to take place on October 7, Scalia will redefine the doctrines announced in Bush v. Gore to read as he always wanted them to read: Voters have an equal protection right to have their votes counted accurately and the federal courts should intervene to enforce these rights when, and only when, court action is consistent with the needs of the Republican party."

Republicans were just as quick to use the decision as a way to appeal to their base. Republican state Sen. Tom McClintock, who is running third behind Democratic Lt. Gov. Cruz Bustamante and body-building actor Arnold Schwarzenegger in the race to replace Davis, called the Ninth Circuit's decision a "distraction" from a liberal appellate court that has become the "laughingstock" of the nation. "I want to remind people that the Ninth Circuit is the most reversed court -- the same court that banned the words 'under God' in the Pledge of Allegiance," McClintock said in a statement.

If Monday's decision puts the judiciary -- both the Ninth Circuit and the Supreme Court -- uncomfortably in the middle of electoral politics, the judges involved have only themselves to blame.

In the process of handing the White House to George W. Bush in 2000, the conservatives on the Supreme Court had to embrace voting-rights arguments under the Equal Protection Clause of the U.S. Constitution that they likely never would have considered otherwise. And in postponing the recall Monday, the three liberal Ninth Circuit judges slammed those arguments right back in the Supreme Court's face.

The conservatives on the Supreme Court "walked right into this," said Georgetown University law professor Mark Tushnet. By inserting themselves into the presidential election -- and by doing it using a doctrine they normally would not have embraced -- the justices opened themselves up to questions about their political motivations, he said.

And by slavishly following the Bush vs. Gore decision, the Ninth Circuit judges may have forced the Supreme Court justices into an awkward dance of explaining why Bush vs. Gore doesn't really mean what it says. "The Ninth Circuit is sometimes most controversial not when it flaunts Supreme Court authority but when it takes the Supreme Court's words and starts running with them in ways that five justices don't want them to go," said Hasting law professor Vikram Amar.

The Ninth Circuit judges seemed to do a bit of that Monday. They quoted frequently and at length from Bush vs. Gore, and they threw in other taunts at the Republicans as well. In a nod to other Florida 2000 controversies, they noted that the rushed nature of the California recall will make it difficult for voters serving in the military to have their ballots back in California in time to be counted. And in what appeared to be a fairly gratuitous reference to the war in Iraq, the judges noted the importance of modeling good democratic behavior for citizens of foreign lands at this "critical time" in history.

It all seemed like an intentional effort to pick a fight with the Supreme Court's conservatives. And on some level, at least, legal experts predicted that the Supreme Court will take the bait. Richard Epstein, a professor of law at the University of Chicago and a fellow at Stanford's Hoover Institution, said he thinks it is likely that Supreme Court will reverse the Ninth Circuit decision almost immediately. While he is no fan of Bush vs. Gore, he said the Ninth Circuit's decision is even worse. "This is a case of judges taking a bad decision and extending it in a grotesque fashion," Epstein said.

While Epstein believes that the Equal Protection rationale behind Bush vs. Gore was dubious at best, the right way to apply that rationale, he said, is after the fact (as the Supreme Court did in Florida) and then, only if it matters. In the Ninth Circuit's decision Monday, the court accepted the argument that approximately 40,000 voters would have their votes thrown out if punch-card ballots are used. Epstein's solution: Hold the election, and if the result turns on 40,000 votes or fewer, wade into the Bush vs. Gore morass then.

Tushnet predicted that the Supreme Court will take just such an approach, but in a slightly more oblique way. Rather than reversing the Ninth Circuit, the Supreme Court could simply stay the effect of the Ninth Circuit's order until after the recall election. "They could say, 'We can figure out ways to sequester the challenged ballots, and let's see if it makes a difference.'"

Whatever the Supreme Court does, though, the Ninth Circuit's decision brings the specter of Florida to California. Democrats are already eager to nationalize the California debate. Bill Clinton campaigned with Gray Davis in Los Angeles Sunday, and other major national Democrats -- including, possibly, Al Gore -- are expected to appear in the state in the coming weeks. If the Supreme Court is seen as intervening in California, the "recall as right-wing power grab" argument becomes a much easier sell for Davis.

In the meantime, however, both Davis and the candidates to replace him seem committed to campaigning as if the Ninth Circuit decision never happened. With an eye toward the judicial politics of it all -- and aware that the Ninth Circuit is indeed the most-reversed of all of the federal appellate courts -- Davis and his challengers continued to campaign Monday with the assumption that there will be an election on Oct. 7.

The most recent polls show the recall race drawing ever closer: A Los Angeles Times poll shows voters favoring the recall just 50-45, a significant slide from earlier numbers. Bolstered by the poll, Davis made buoyant campaign stops in Southern California Sunday and Monday. Schwarzenegger, who was unable to shake McClintock's conservative challenge at the Republican state convention in Los Angeles over the weekend, appeared Monday on Oprah Winfrey's show with his wife, Kennedy cousin Maria Shriver, who had to put her hand over the candidate's mouth to stop him from dipping into the lewd and crude language that has drawn criticism from women's groups and conservatives alike.

Meanwhile, independent candidate Arianna Huffington expressed hope that a delay in the voting could give her -- and other lesser-known candidates -- time to make inroads on the lead held by Bustamante and Schwarzenegger. In a statement issued Monday afternoon, Huffington said the Ninth Circuit's decision, if upheld, "will give voters more time to get to scrutinize all the recall candidates -- which is good news for democracy but bad news for those candidates hoping to win based on name recognition and celebrity or the fact that they happen to be the next guy in line."