The Pentagon's new public-private military was supposed to be a lean, mean fighting machine. It isn't working. 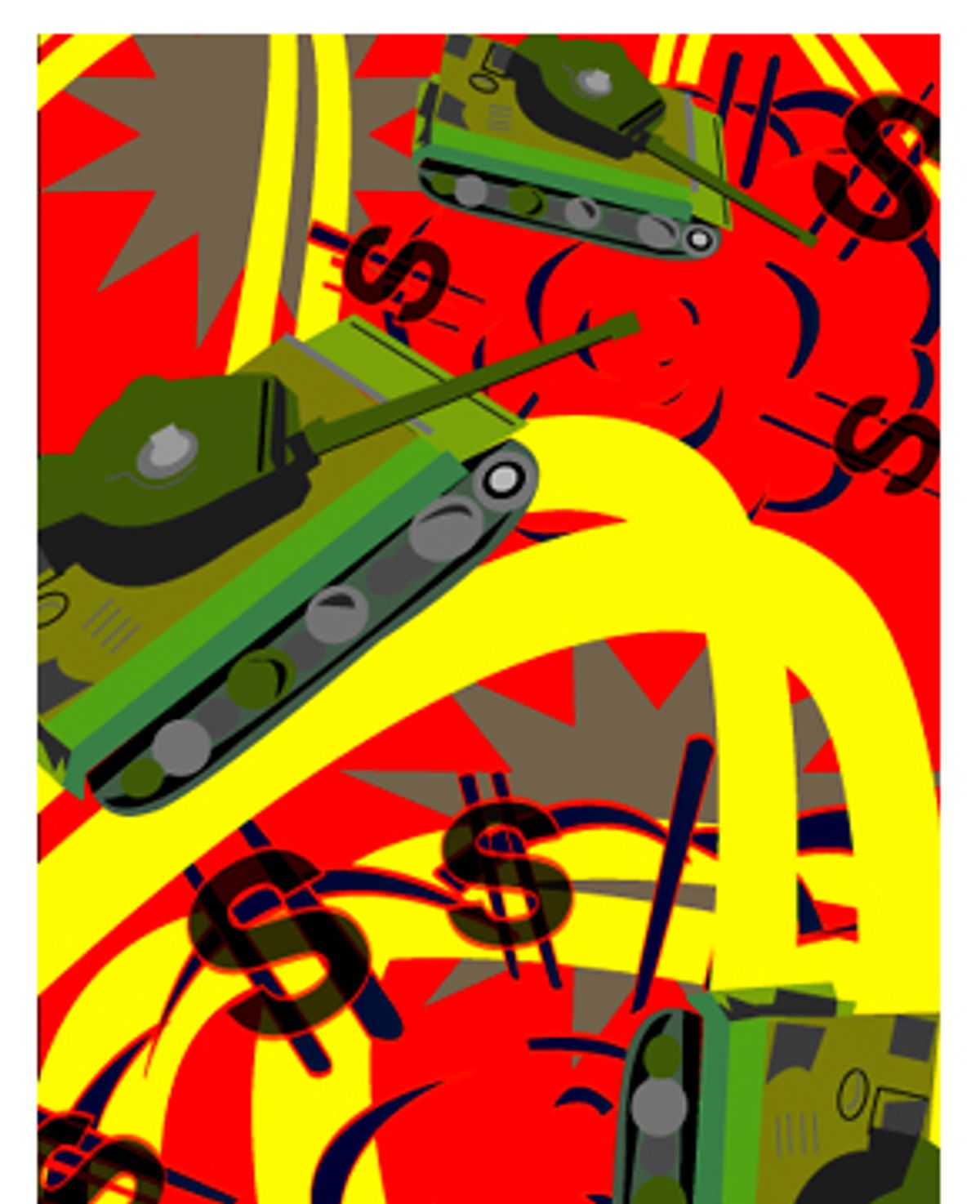 Any occupying army would be hard-pressed to contain the terrorist attacks, the warring political passions, and the anger erupting right now in Iraq. The powerful explosions in August that targeted in quick succession the head of the U.N. legation, a moderate Shiite cleric, and an Iraqi police chief made it painfully clear that the war has entered a new and deadly phase. Now, facing a protracted guerrilla war, the vulnerabilities of the U.S. occupation force spring from what Secretary of Defense Donald Rumsfeld must have supposed would be its greatest strength: the fact that it is being managed like a corporation.

From the beginning, Rumsfeld assumed the role of a corporate CEO, downsizing the infantry and outsourcing many of its logistical functions in an attempt to create a more nimble and cost-effective fighting force that could be deployed in multiple hot spots around the globe. Some corporations may serve as better models than others, however. It is telling that Rumsfeld has clung to the fantasy of a "fast" war, ignoring history and the advice of seasoned generals, and running the Pentagon along lines better suited to a fast-food franchise than to the complex task of nation building. His choice of the fast-food model of warfare exposes several fallacies that underlie the administration's ideology of privatization.

Not all of it is Rummy's fault. Corporatization of the military has been rampant for the past decade. Peter W. Singer, a fellow at the Brookings Institution and the author of "Corporate Warriors," uses the term "privatized military firm," or PMF, to refer to the growing number of companies that provide services linked to warfare. PMFs emerged in the 1990s, while the world's armies were shrinking by more than 6 million in personnel following the end of the Cold War. Today, annual revenues of PMFs are estimated at roughly $100 billion, and they're rapidly expanding. Fortune magazine lists Armor Holdings, one of the biggest PMFs in the U.S., among its annually published "100 fastest-growing companies."

Many PMFs operate as "virtual companies," in the fashion of Internet firms with little in the way of bricks-and-mortar assets. Most do not maintain standing forces, but rather draw from databases of qualified personnel -- South African mercenaries and ex-KGB agents, for instance -- and specialized subcontractors, all on a contractual basis.

PMFs supply everything from combat troops to cluster bombs and jet fighter squadrons. They can provide strategic and organizational analysis, drawing on the expertise of recently retired generals. Or, like Halliburton's Brown & Root division, they can remove land mines and provide logistical and infrastructural support. Clients range widely, from the government of Saudi Arabia to South American drug cartels, from mining companies in places like Sierra Leone to the U.S. government's peacekeeping operations in Somalia and Kosovo.

War, in short, is being outsourced. And although highly profitable, it tends to reward companies that are not particularly competitive in the marketplace. Singer observes that Brown & Root received a $1 billion contract to augment U.S. forces in Kosovo, despite having allegedly failed to deliver, or severely overcharged, in four out of seven of its contractual obligations during the Balkans conflict. Shortly after, Halliburton picked up a $1.7 billion no-bid contract with the Army Corps of Engineers for taking over Iraqi oil production and making infrastructure repairs.

The wider impact of corporatized warfare on international affairs has yet to be understood. PMFs hired by both sides may have prolonged the bloody conflict in Ethiopia, and they may be reducing the Bush administration's accountability in Colombia, where the American military force is almost wholly privatized.

Even in the role of peacekeeping, privatization has been linked to human rights abuses -- as in Kosovo, where a Salon investigation last year found that employees of DynCorp allegedly bought and sold girls as young as 12 as sex slaves. Privatization also blurs the boundaries in international relations in unexpected ways: When a small plane carrying U.S. missionaries was shot down in Peru two years ago, it turned out to have been targeted mistakenly by a U.S. contractor, a relatively obscure Alabama-based company called Aviation Development Corp. The item quickly disappeared from the news.

The present war in Iraq has to be viewed against this background. And its failures present George W. Bush with an ideological dilemma. Why? Because quite apart from the administration's known ties to the oil industry and to Halliburton -- most famously in the persons of Enron's Ken Lay, an early contributor to the Bush campaign, and Vice President Dick Cheney, who is clearly Halliburton's man in the White House -- there is, beyond the Beltway, a less cynical Republican constituency composed of honest folk who truly believe in the idea of individual initiative and old-fashioned free enterprise. So on the one hand, Rumsfeld's orchestration of the invasion and occupation was to be a vindication of the principles of privatization and corporatization that have driven the Bush administration with the force of a religious crusade. On the other hand, the administration's predilection has been for short-horizoned and monopolistic companies of the sort that undermine honest competition. Eventually, small-town Republicans and veterans groups alike are going to see through the charade.

Much of the left's attention has been focused on the administration's more obvious end goal, of gaining control of Iraq's oil fields and carving up the country into corporate fiefdoms. What should not be overlooked is the new hybridized fighting machine itself -- which we might as well dub "McArmy," since it arguably embraces those principles set forth by George Ritzer in "The McDonaldization of Society."

The aim of McDonaldization, Ritzer said in a recent interview with Salon, is to create a highly controlled, hyper-rational distribution system that maximizes efficiency. The skills and the humanity of the employee are supplanted by technology and by a rigid script. This yields a predictable experience for the consumer. Walk into a McDonald's in Hong Kong and, with minor adaptations to local cuisine, it will be the same as a McDonald's in Miami.

Some of these qualities -- the dehumanization, the emphasis on technology, the predictability of the consumer's experience -- are common to modern armies. What Rumsfeld and his coterie have brought to the Pentagon is the mindset shared by many of the Bush administration's big donors -- the culture of growth-oriented hypercapitalism.

The consumer, in this case, is the enemy, whether Saddam Hussein or the Taliban or another foreign foe. McArmy is intended to serve not just as the instrument of American hegemony but also as the very embodiment of militant hypercapitalism. Iraq was to be a showcase. It was intended to send a message of invincibility to militant Islam. McArmy's planned triumph in Iraq would have sent a message both to the Bush administration's critics at home and to its reluctant allies abroad: Hypercapitalism works against jihad as well as against ma-and-pa restaurants.

But McArmy is failing the test. Rumsfeld's downsized force of 140,000 troops -- including some 40,000 mostly Hispanic green-carders -- are stretched too thin to protect themselves, let alone prevent looting, sabotage and attacks on Iraqis who cooperate with Americans. They lack the language skills and cultural preparation necessary for effective peacekeeping. They were trained and equipped to deliver "shock and awe" and little else. They were prepared only for cookie-cutter roles, for the short horizon, not for the more complex constabulary role that would be required of them.

McArmy might have been adequate for the first phase of the war, George Ritzer told Salon. "In terms of fighting the war, the McArmy idea apparently worked well. It's with winning the peace that it doesn't work well. You can't just go in and level town after town and still win the hearts and minds of the Iraqis."

While it is true, he says, that those whom McArmy is fighting or occupying are its consumers -- "reluctant consumers," he adds -- Americans back home are consumers at another level, and they are seeking a predictable experience. "The message in fighting the war both times in Iraq was: We can do this pretty easily and without much cost to us," he says. "And then we're kind of ill-prepared for what we now face." The expectation of a predictable experience has created, in Ritzer's view, "a crisis of expectations."

Privatization itself -- apart from McDonaldization -- has led to other problems. Many of the logistical components such as modular barracks, field kitchens, and mail delivery were outsourced to private contractors. The result? Months into the war, GIs were still camped out, still eating the loathed MREs, and are still without adequate water. Mail is backlogged for weeks.

"We thought we could depend on industry to perform these kinds of functions," Lt. Gen. Charles S. Mahan, the Army's logistical chief, told journalist David Wood in an interview for Newhouse Publications last summer. But, as Linda K. Theis, who oversees some civilian logistics contracts, reminded Wood: "You cannot order civilians into a war zone." Replacing 1,100 Marine cooks with civilians seemed like a bright idea to someone two years ago. But during the bloody Battle of the Bulge in 1944, Army cooks doubled as riflemen; in McArmy, civilian cooks can walk off the job.

Similarly stalled is the task of rebuilding Iraq's infrastructure -- outsourced to Halliburton, Bechtel, and other big contributors to the Bush campaign. Baghdad stays paralyzed, without reliable electricity. Even in Basra, where the Shiite clerics were most oppressed by Saddam Hussein, anger is growing against the occupiers. The desert is hot, the stench of sewage ubiquitous, potable water scarce.

Assessing all this, one has to ask of the Pentagon's new planners: What were they thinking? The answer, perhaps, is that they were not thinking. The privatization zealots running the Pentagon and the White House are paid handsomely not to outthink their corporate sponsors. Which highlights the glaring flaw in the neocon mythology: The profit motive does not always serve the public good.

In the final analysis, as McArmy demonstrates so poignantly in Iraq, the neoconservative ideology is the expression, not of "free market" capitalism, but of monopoly capitalism as practiced by subsidy-bloated companies like Halliburton and Bechtel, whose insider position allows them to dip into the pockets of American taxpayers.

At bottom, the whole adventure in Iraq is a house of cards. The Bush administration's reluctance to acknowledge the financial cost of the war steals a page from Enron's accounting practices. Bush's tax cut, before the initial $87 billion bill came due, was reminiscent of the boxes of cigars given out by glad-handing Enron executives at the last stockholder meeting before the jig was up.

But the administration's accounting sleight-of-hand is only an extension of the something-for-nothing fallacy of privatization that inspired the move to eliminate Head Start from the federal budget and transfer it to the states under block grants. Or the plan to replace dedicated National Park Service employees with outsourced McRangers. The difference is one of degree and visibility.

In the end, the cheap meal is not so cheap. If Iraq becomes a rallying point for militant Islam -- not just in Iraq, but wherever Western cultural encroachment is perceived as a threat -- then our military capacity is likely to be drained on a scale unprecedented since Vietnam.

Now, of course, the administration would like nothing better than to outsource peacekeeping to the United Nations. The task of nation building requires specialized skills and is highly labor intensive, even at the constabulary level -- to say nothing of its being politically untenable. In the meantime, every car bomb that explodes, every oil pipeline that ruptures, every mob that surrounds American soldiers, is a reminder -- surely even to Donald Rumsfeld, the Ronald McDonald of warfare -- that there is no such thing as "fast war."