He mangled his position on the congressional Iraq resolution, and when the going got tough, he summoned a press aide with a cry of "Mary, help!" Tell me again why this guy should make Howard Dean and John Kerry quake in their boots? 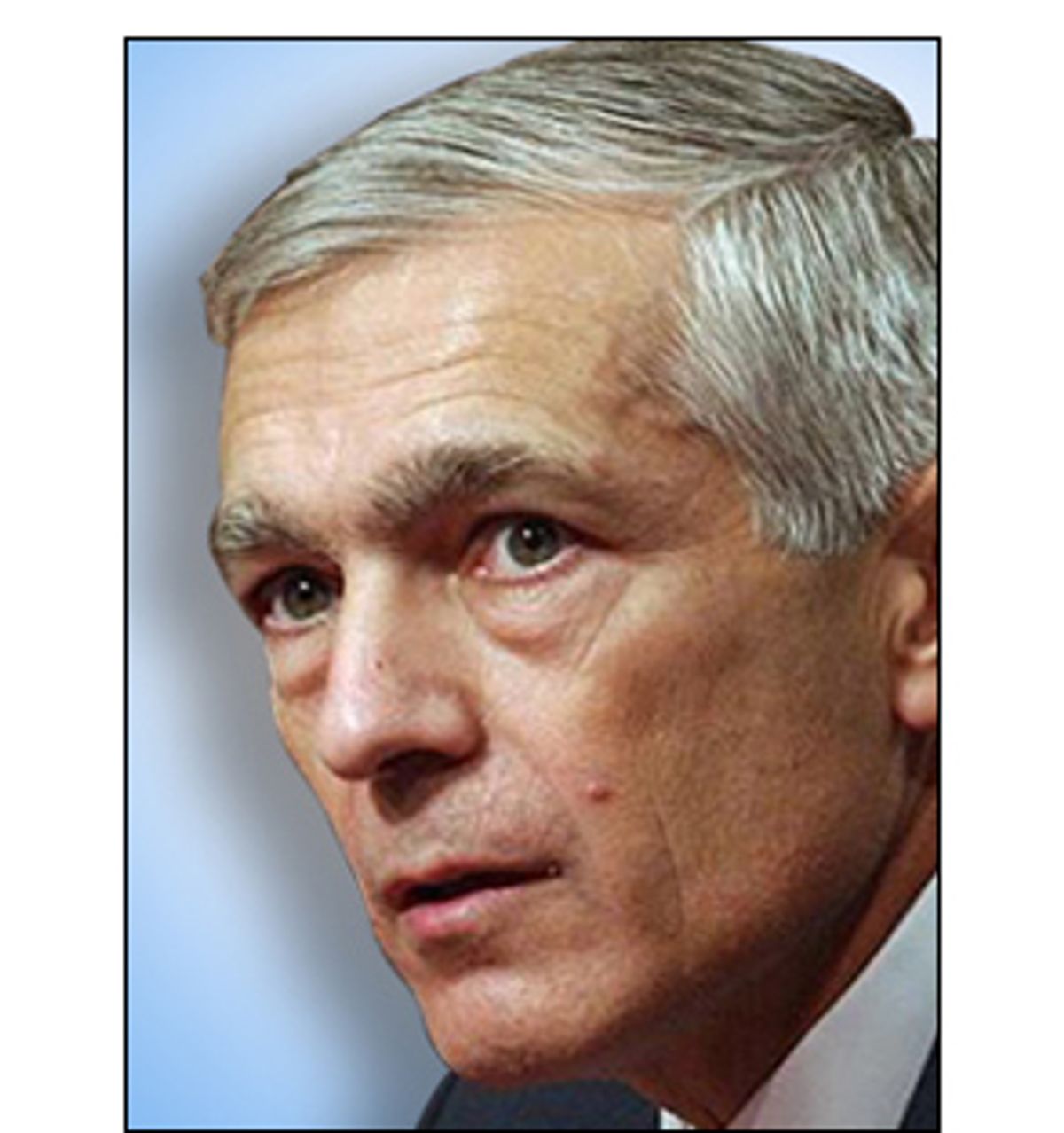 I'm not ready to declare Wesley Clark's candidacy doomed after his embarrassing afternoon of free-association with political reporters Thursday, and his flip-flop on Friday, but it's kind of tempting. It's tempting because Clark's melange of candor and equivocation and "probablys" and "I'm not sures" captured in the interviews, most notably on the enormous and divisive issue of Iraq, showed he's not ready for prime time. And it's tempting because it would just feel good, in a way. A dead-in-the-water Clark candidacy would be a great rebuke to party big shots who are trying to foist him on Democrats because he's more "electable" than Howard Dean or John Kerry. We're going to see about that. It should be interesting.

It's not time for panic about the Clark campaign, or rage about the top-down groundswell behind him, only questions: What was the retired general spending his time on in the last three months, while the world knew he was only his wife's blessing away from declaring his candidacy? Wasn't there a minute to catch up on the Brady Bill, to figure out whether he'd have voted for the Iraq war declaration in Congress last October and exactly why, to research whether or not he voted in 1972 -- "I hope I voted then," he said, "and I would have voted for [Richard] Nixon." And why are party big shots so enamored of this politically untested general who admittedly performed well in CNN studios but doesn't seem ready for the rough and tumble of campaign trail journalism?

It wasn't the political positions Clark stated that were disturbing as much as the apparent lack of thought behind them. His confessing that despite his doubts about the Iraq war he "probably" would have supported the resolution in Congress isn't indefensible -- John Kerry made the same decision for much the same reason (although he's finding the nuances of his choice tough to defend politically). What's disturbing is Clark's appearing to have hardly thought about it much until now, and the vacillating way he defended his position once he took it.

A moment after saying he'd probably have voted for the resolution, he added, "I don't know if I would have or not. I've said it both ways because when you get into this, what happens is you have to put yourself in a position -- on balance, I probably would have voted for it." But later, talking about Howard Dean's opposition to the resolution, Clark said, "I think he's right. That in retrospect we should never have gone in there. I didn't want to go in there either."

The most surreal moment came when the Iraq questions were getting tougher, and Clark called for his press aide Mary Jacoby. "Mary, help!" the retired general cried, in a moment that could define him, and not as the tough military leader his supporters tout him as. The soothing Jacoby reminded Clark, "You said you would have voted for the resolution as leverage for a U.N.-based solution."

And then on Friday he backtracked again, telling the Associated Press "Let's make one thing real clear, I would never have voted for this war," Clark said before a speech at the University of Iowa. "I've gotten a very consistent record on this. There was no imminent threat. This was not a case of pre-emptive war. I would have voted for the right kind of leverage to get a diplomatic solution, an international solution to the challenge of Saddam Hussein." OK, glad we got that straight, 24 hours later.

There were other omissions and equivocations in his Thursday interviews, which wereconducted on his campaign jet with Adam Nagourney of the New York Times, the Washington Post's Jim VandeHei, the Boston Globe's Joanna Weiss and Johanna Neuman of the Los Angeles Times. (Only Nagourney's account, by the way, included the exchange with Mary Jacoby.) Clark pronounced himself a staunch supporter of the Second Amendment and admitted he didn't really know what the Brady Bill did or whether change was needed to it. He suggested he would probably oppose President Bush's request for $87 billion to rebuild Iraq, but didn't give specifics about what he would support.

And later, in an interview with the Miami Herald, he seemed to endorse a moratorium on the death penalty, because there has been "a lot of discrimination and a lot of injustice," and suggested cases be reviewed with DNA evidence. But when the reporters asked if he'd back a halt to executions, they noted, "Clark sat up straight. 'Stop. Stop,' he said. 'I promised I wasn't going to take a strong position.'" He defended his lack of policy prescriptions and "strong positions" by noting that he only made his decision to run on Monday, VandeHei noted, and asked that voters give him time to think things through.

I couldn't help thinking that the general is sounding a little like Arnold Schwarzenegger, another political newcomer who's been short on specifics and has asked voters for their patience. Of course, Clark lacks many of Schwarzenegger's negatives -- his notorious past with women, for instance -- and he deserves credit for meeting with the nation's toughest political reporters on his first day on the trail (he gets points for courage, but not for judgment, given how green he seemed). But there's something arrogant and entitled about both of them, who seem to think their star power should make up for their lack of clarity about policy and inexperience with elective office. Voters haven't been charmed by Schwarzenegger; we'll see if they're wowed by Clark.

I would never vote for Schwarzenegger, of course, and I may still vote for Clark. But Thursday's performance confirmed my worst fears, not about the general, but about the party elders who've decided Howard Dean's a bad frontrunner and John Kerry is toast. I might be able to live with their decision if they were right, and if they brought forth a candidate head and shoulders above either man. But they don't seem to have managed that. In ABC's "The Note" this morning, one angry Democrat is quoted anonymously savaging the draft-Clark pooh-bahs in the darkest tones.

"I have read the accounts of the Clark interviews and my reaction is despair and anger. Why did my party's best operatives think it would be a good idea to subject their neophyte candidate to the country's savviest reporters for over an hour? Why have my party's elders rallied around a candidate who is so shockingly uninformed about core issues and his own positions? I am not a Dean supporter -- but I am angry that our party's leaders have anointed an alternative to him who seems even more ignorant and unprepared -- and that this supposed 'anti-war' candidate turns out to have been in favor of both the war resolution and Richard Nixon!! And let's not even talk about the Clintons. Today I am embarrassed to be a Democrat."

And while that angry Democrat isn't a Dean supporter, expect the Deanites to be even more outraged. As Moveon.org's Eli Pariser told Salon's Eric Boehlert this week, there's a civil war brewing between the Democratic base and its loud Dean component, and party elites associated with the Democratic Leadership Council and the consultants clustered around the Clinton-Gore campaigns, who think Dean's too radical to be elected. A couple of more stumbles like Clark's on Thursday, and the Dean folks will be even more furious that their man, who fought to be the frontrunner on the tough field of campaign battle, is being dismissed for a supposedly antiwar general who can't clearly articulate his own stand on the Iraq resolution, which was a defining moment for this generation of Democrats.

It's too early to pronounce Clark's candidacy gravely wounded. But he took some self-inflicted fire yesterday, and it's not a good sign. And the sniping from fellow Democrats -- let alone the Bush machine -- hasn't yet begun. Let's hope he has a better battle plan when the race gets going for real, or else a campaign he was hoping would be as successful as his Kosovo crusade could turn out to be more like Iraq.