In this predictable Mike Figgis thriller, Sharon Stone and Dennis Quaid buy a cute old country house. Then the creepy guy with the bed-head 'do shows up! 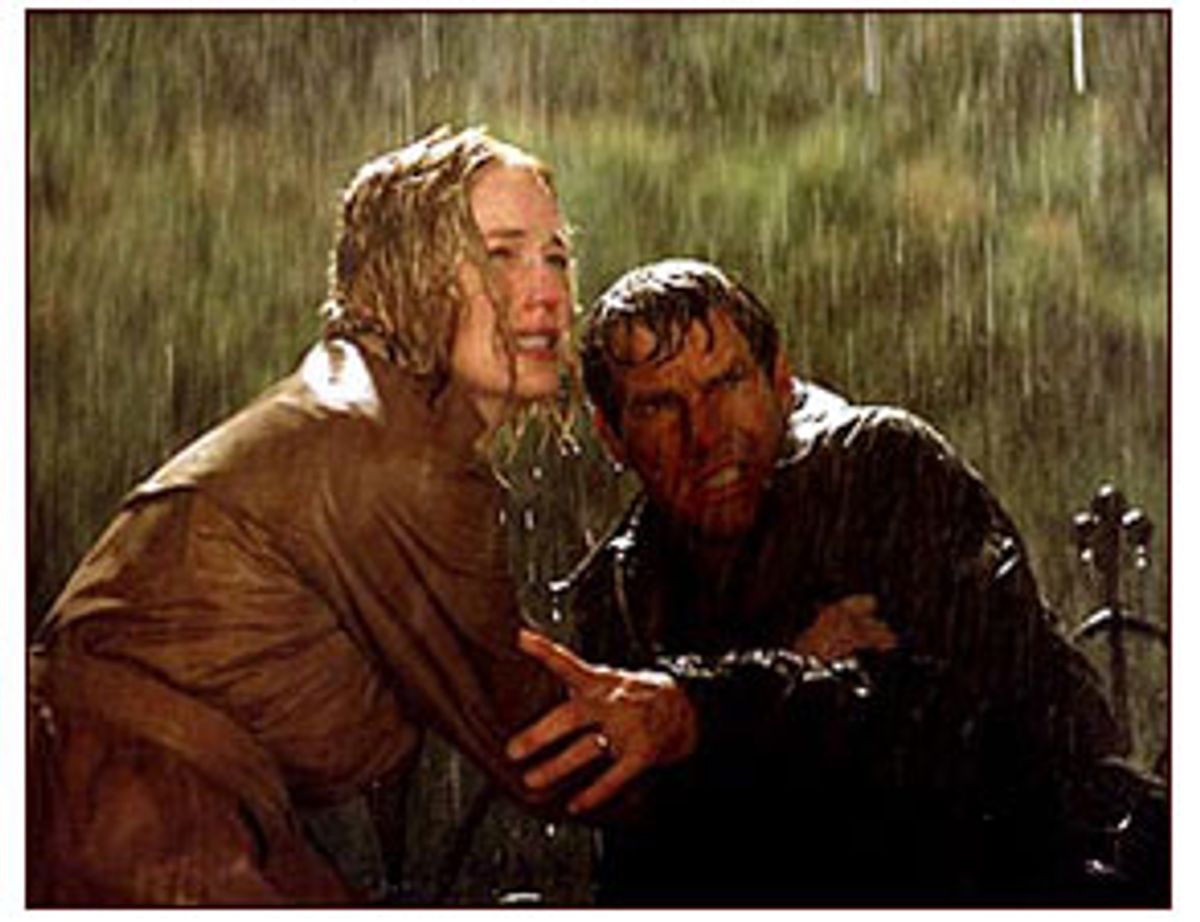 The grand and ghoulish joke of "Cold Creek Manor" is that city folk really should know better than to move to the country. There, as we all know, the happy chirping of crickets is actually a secret code for mobilizing blood-sucking cultists who look like regular people but are all at least 200 years old, the ghosts of disgruntled old ladies burned for witchcraft in 1762, or, in the most disappointing scenario, your average garden-variety family of mass murderers.

"Cold Creek Manor," directed by Mike Figgis (he also produced the movie and, as he generally does, wrote its score), is wholly in on that joke for the first hour or so. "We've got to get out of the city!" a shaken Dennis Quaid implores his wife, hotshot businesslady Sharon Stone, after one of their two children is nearly killed outside his private school by a typically aggressive city driver in an SUV (which, incidentally, is pretty much like the SUV Quaid himself has just used to drop the kids off, minutes before the accident happened).

So they pack up that SUV and go a-huntin' for a peaceful country retreat. A bank foreclosure might be nice, they've decided, impervious to karma. On their happy house-hunting jaunt, they pull up to a rural filling station and a sullen Juliette Lewis, decked out in pure trailerette couture, reluctantly shambles out to fill their yuppie-ass tank. Ah, country life! Not like the city, where people are so cold and unfriendly.

Figgis doesn't play those moments for broad laughs -- his style of filmmaking here is taut and controlled, which gives the first chunk of the movie a creepy sheen. Figgis has made several astonishing pictures, some of which people have actually seen ("Leaving Las Vegas") and others most of them haven't ("The Browning Version"). He's a director who works mostly, but not exclusively, outside the mainstream, yet he fully understands and relishes the pleasures of basic Hollywood craft. (His "Stormy Monday" is a beautifully constructed noir.)

At the very least, you think "Cold Creek Manor" might end up being a good example of what a smart director who's had a break from mainstream filmmaking can bring to workaday material (the script here was written by Richard Jefferies). In fact, "Cold Creek Manor" feels very nicely made, at least until it falls apart: By its midpoint, you start to recognize that it has acute creepy-thrilleritis, which means that it promises us some things at the beginning that it has no intention of actually following up on.

For instance, when the local sheriff (Dana Eskelson) expresses vague interest in the idea that the little city family might purchase the deserted manse known as Cold Creek Manor, she recognizes that their presence could benefit the locals. "We could use some new blood in the county," she says blankly, her eyes hidden by a pair of regulation aviator shades.

It's a line that's as old as the hills, even the ones that don't have eyes. Before long, Stephen Dorff shows up, unannounced and uninvited, at the family's house, which they've purchased and energetically set about spiffing up, after selling off much of its contents, which include spooky Victorian engravings of Abraham sternly securing Isaac to the chopping block. Where has this stranger come from, with his bed-head Strokes hair, his trucker's cap, and his tight-fitting '70s western shirt shot through with Lurex threads? Is he a messenger from New York's Lower East Side, come to taunt them with visions of the nightlife they're missing? Actually, he's just gotten out of prison -- for what, we don't know -- and he's shown up for no reason other than to rustle up trouble.

"Cold Creek Manor" features some jumpy stuff with snakes, a horrible accident in which a cute little pony gets killed (we don't see the event, but we get a gander at its aftermath) and some halfheartedly terrifying nighttime driving stuff that's straight out of "Joy Ride" (which itself came straight out of Steven Spielberg's "Duel"). The point isn't that the stuff isn't surprising enough -- most of us go to these creepy thrillers with a stock set of expectations, anyway. All we want is to see them fulfilled in a way that keeps us on edge and occasionally makes us laugh at our own involuntary jumpiness.

At the beginning, "Cold Creek Manor" almost makes you believe it could deliver all that and more. Instead, it follows the weary, well-worn path of so many contemporary scare-fests, including a protracted wrap-up of the action that hardly feels like a wrap-up at all. Neither Stone nor Quaid gives much of a performance, but then, they don't have to: They're merely place markers, cutouts around which the action, such as it is, is destined to happen.

If "Cold Creek Manor" had cut loose, particularly within the framework of Figgis' careful control, it could have made for an outlandish diversion. Any thriller that features Christopher Plummer as a now-bedridden old coot of a farmer who, in younger days, took pleasure in bashing the skulls of sheep with a medieval-looking customized tool known as a "killin' hammer," has got to be crazy. "Cold Creek Manor" is maybe a little crazy. But in the end, not crazy enough.