Neal Stephenson's new "Quicksilver" takes a fantastical, circuitous tour of the 17th century in search of the roots of science and the nature of the universe. 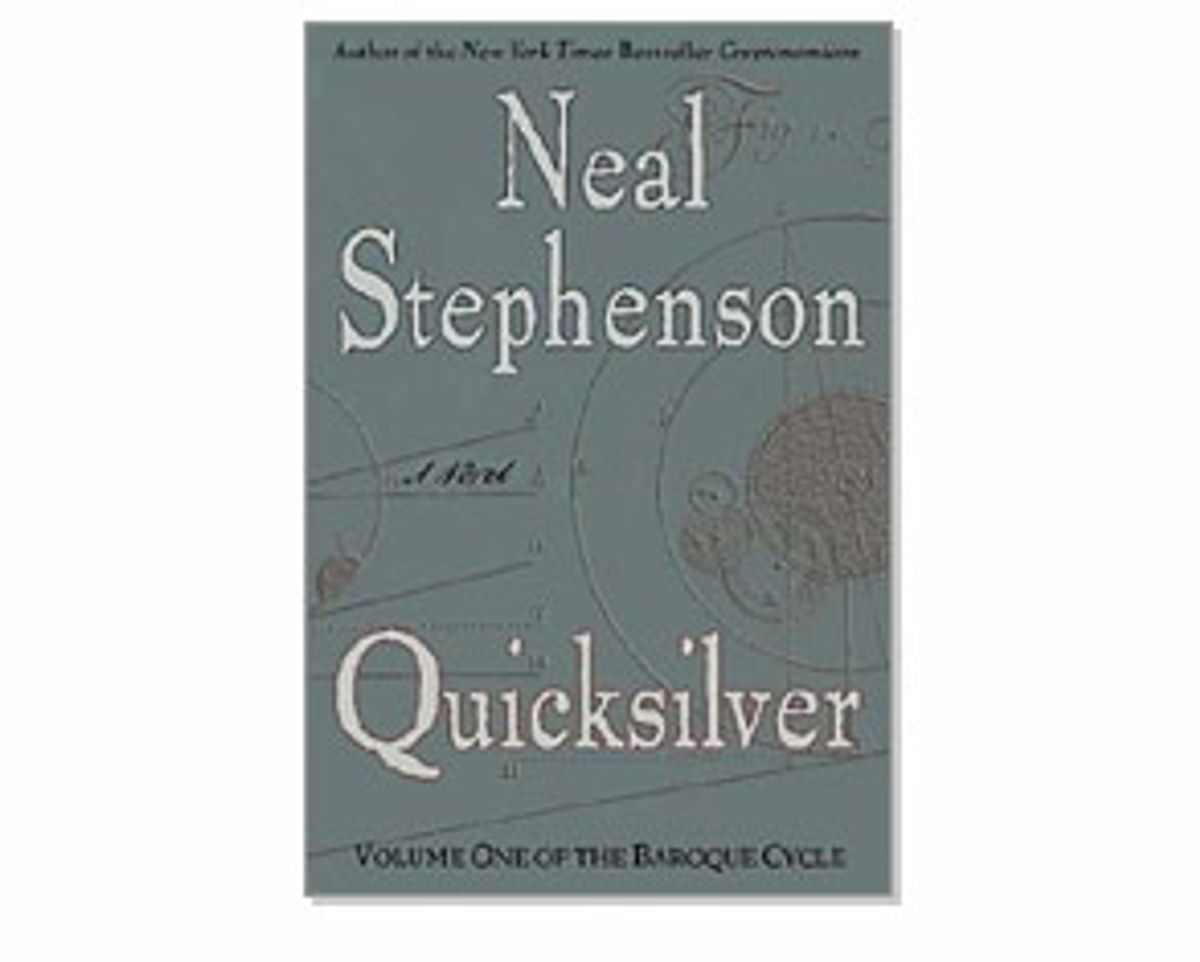 A little more than a third of the way into "Quicksilver," the new novel from Neal Stephenson, Jack Shaftoe, King of the Vagabonds, gallops on a stolen Turkish war horse to chase an ostrich through a tunnel under the city of Vienna. He ends up in a large underground room where Turkish soldiers are systematically murdering the harem women of their own (just defeated) sultan.

Never mind why Jack is chasing the ostrich, how he came to be in possession of a charger, or what impels him, once in the subterranean chamber, to suddenly act like a hero and rescue a damsel in distress. All the reader needs to care about is that it is a ludicrous, delirious scene, the kind of thing we've come to depend on from Stephenson -- the author of, among other novels, "Snow Crash" and "Cryptonomicon," two books that rank high on the top-10 lists of many computer geeks.

In "Quicksilver," Jack (who happens to be the ancestor of Bobby Shaftoe, the World War II-era Marine who is one of the four main characters of "Cryptonomicon") repeatedly gets himself into trouble on a gigantically absurd scale. The incident in the tunnel is just a warm-up for the nuttiness that ensues later in the novel when Jack (mounted on the same horse) crashes a costume ball held by the Sun King, Louis XIV of France.

We expect nothing less from Neal Stephenson than sustained ecstatic zaniness. In his first novel, "The Big U," a food fight in a college cafeteria is staged as if it were a replay of the battle in which Zeus and his cohorts overthrew the Titans. In his second novel, "Zodiac" -- an "eco-thriller" -- there's a laugh a sentence as the "granola James Bond" rockets around a polluted Boston Harbor. "Snow Crash" somehow figured out how to mix virtual reality and Sumer. Its successor, "The Diamond Age," is a nanotechnology lark lavished with heaping doses of neo-Victorian China. And "Cryptonomicon," a huge sprawl of a novel, plumbs the depths of modern computer geekdom more exhaustively than any other novelist has hitherto dared, while at the same time rollicking along through the many theaters of World War II action.

But if you're looking for a reprise of "Cryptonomicon" in "Quicksilver," which despite its thousand-page length is billed as only the first volume in a three-volume "prequel" to "Cryptonomicon," then you may need to look again. "Quicksilver" is a different beast. It is a novel in which plot seems to be a secondary, or even tertiary, concern. More important to Stephenson, it appears, is bringing to life the world of the late 17th century in such a way that he can have fun with some big ideas about science and God and history.

The clear connection between "Quicksilver" and "Cryptonomicon" extends beyond the amusement of the former being populated by the ancestors of the latter's characters. In "Cryptonomicon," Stephenson traced out the roots of the digital computer age; Alan Turing, one of computing's pioneers, is a key character. In "Quicksilver" we go back much further, to an extraordinarily fecund period of history in which Isaac Newton, Gottfried Leibniz, and other giants of science and philosophy are laying down the basics of the scientific method -- making discoveries that would set the stage for the entire Industrial Revolution and ultimately the computer age. As befits the descendant of a family of engineers, Stephenson has always been interested in how things work, and in "Quicksilver" he seeks the source of the Nile, as it were, for how modernity has come about.

And yet, somehow, the novel isn't quite as fun as his previous efforts. I teased out the ostrich incident at the beginning of this review because to the best of my recollection it was the first time I laughed out loud while reading "Quicksilver." Reading previous Stephenson novels, I erupted in gut-wrenching chortles on nearly every page. In "Quicksilver" it's as if Stephenson is in such a rush to tell you what kind of clothes a particular earl is wearing, or what the derivation of the word "saboteur" is, or how the dynastic relationships of Europe's ruling families are interwoven, that he loses sight of his story, and of his ability to delight.

But that's OK. As seen through Stephenson's eyes the late 17th century is endlessly fascinating, and so is the focus on the intersection of religion and science. Once I stopped worrying about where the novel was going, and just let myself relax and settle into it, as if it were a giant hot tub, I found myself unable to put it down. And I began to wonder whether maybe the whole volume, all 927 pages of it, was just an elaborate stage-setter: Tune in next year for the real action.

"Quicksilver" is an odd duck, because at the same time that one could argue that it's not really about anything, one could also say that it's about everything. Like the metal quicksilver (mercury) itself, which pops up in all kinds of unexpected places in the novel, it slithers, holding no fixed shape -- shiny and attractive, but in the end difficult to grip firmly.

The Sun King, Kings Charles II and James II of England and William of Orange are all significant role players, as are Newton, Leibniz and a gaggle of other extraordinary men, the founding members of England's Royal Society, geniuses all. Religious factionalism, dynastic intrigue, war, plague, fire -- just by describing the late 17th century in minute detail, Stephenson has conjured up a world as fantastic as any of his science fiction creations.

We might think we live in kooky times now, but the present day doesn't hold a candle to the late 17th century. While the Royal Society's "natural philosophers" are figuring out gravity and the basics of biology and optics and calculus and a score of other revelations, the Sun King is waging war on Protestant heretics, the Turks are besieging Vienna, the stock market is gathering steam in London and Amsterdam, paper money is being introduced, Puritans are flocking to the New World, and the Dutch are about to take over England.

In the midst of these events, Jack Shaftoe, Daniel Waterhouse (a brilliant would-be natural philosopher who finds himself outshone by the likes of Newton and Leibniz) and Eliza, Duchess of Qwghlm, bounce from intrigue to intrigue. What is their purpose? Where are they headed? It's difficult to say. All we know for sure is that they are involved. When big things are happening, they are around and, as often as not, actively taking part.

Stephenson has declared that he wrote "Quicksilver" in longhand, by pen. If one was uncharitable, one might suggest that the result demonstrates what happens when it's too much trouble to go back and revise. The novel reads as if, after masticating upon every datum he could discover about life in the late 17th century, he then wrote the novel in a headlong rush, without looking back.

But it's worth noting that "Quicksilver" is labeled "Volume One of the Baroque Cycle." The dictionary on my desk defines "baroque" as "a style of art and architecture characterized by much ornamentation and curved rather than straight lines." And the baroque period is precisely the period that Stephenson is writing about.

"Quicksilver" is not only about the baroque era, but it also is baroque in its own construction. There is ornamentation aplenty! The only lines connecting any two points in "Quicksilver" are scribbled with all the mad detours and crisscrosses of a 3-year-old armed with Magic Markers.

Relatively early in the novel, Waterhouse is sitting in a cafe in London, when he sees an old enemy, Louis Anglesey, the Earl of Upnor, crossing the street. Here, in abridged form, is how Stephenson describes him:

"Today, walking across Charing Cross, he was wearing a suit that appeared to've been constructed by (1) dressing him in a blouse with twenty-foot-long sleeves of the most expensive linen; (2) bunching the sleeves up in numerous overlapping gathers on his arms; (3) painting most of him in glue; (4) shaking and rolling him in a bin containing thousands of black silk doilies; and (5) (because King Charles II, who'd mandated, a few years earlier, that all courtiers wear black and white, was getting bored with it, but had not formally rescinded the order) adding dashes of color here and there, primarily in the form of clusters of elaborately gathered and knotted ribbons -- enough ribbon, all told, to stretch all the way to whatever shop in Paris where the Earl had bought all of this stuff... He had a wig that was actually wider than his shoulders, and a pair of boots that contained enough really good snow-white leather that, if pulled on straight, they would have reached all the way to his groin, at which point each one of them would have been larger in circumference than his waist; but he had of course folded the tops down and then (since they were so long) folded them back up again to keep them from dragging on the ground, so that around each knee was a complex of white leather folds about as wide as a bushel-basket, filled with a froth of lace..."

It keeps going. Excessive, absurdist, descriptive, presented for the pure delight of readers -- the snapshot of Upnor serves as a kind of miniature fractal representation of the entirety of "Quicksilver": baroque as all get out. The plot lines of "Quicksilver" are like Upnor's knotted ribbons, offering dashes of bright color throughout the narrative, consuming yards and yards of material.

How do you describe a ferment? Perhaps the best approach is to evoke it, by engaging in the process of fermentation itself. Reading "Quicksilver" one can sense Stephenson wrestling with the same issues that his characters bang their heads against. How do the laws of physics and God intermingle? How does science work? Why are things the way they are -- our language, our financial systems, our concepts of free will and destiny? The late 17th century saw an explosion of intellectual brilliance that resembles nothing so much as it does an overflow from a boiling cauldron. So does "Quicksilver."