"Survivor" and Rob Lowe return -- as does the late, great "Dynasty." Jessica Simpson stumped by "Buffalo wings." Plus: The hopelessly ethical "West Wing" staff finally gets its comeuppance. 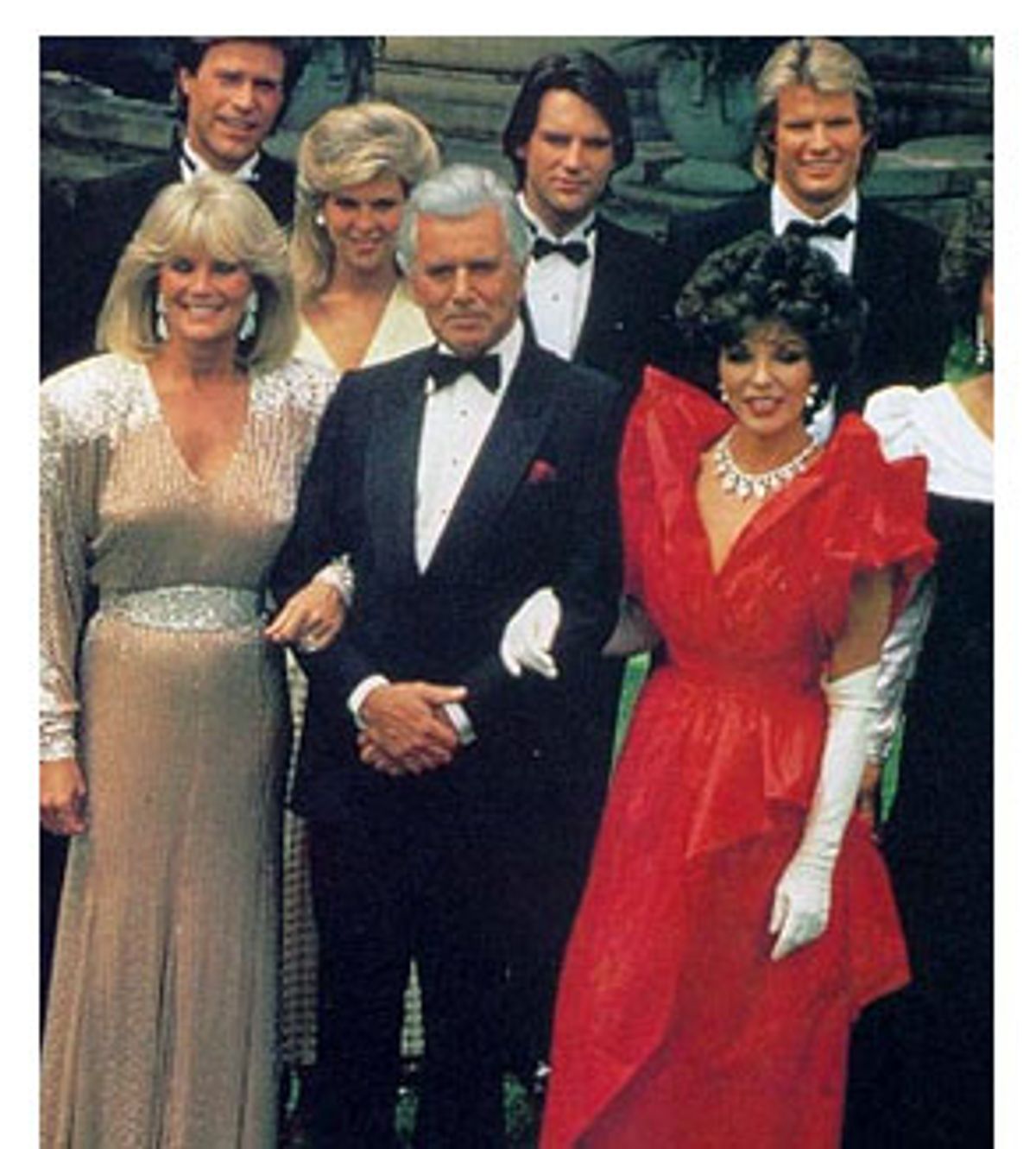 In richness and in wealth
Just as I was lamenting the fact that the "Dynasty" reruns on Soapnet were lingering in some late, unfamiliar, Krystle-less era, along comes the first season of my all-time favorite show as a kid. Those manicured hillbillies on "Dallas" always seemed a little pedestrian to me, compared to the nouveau-riche opulence of the Denver Carringtons, with their snobby butlers and their 30-foot ceilings and their fur-lined private jets. OK, maybe that last one is some Surrealist Concorde the French had planned before they went belly up, but still. Back when I was 9 years old, nothing was better than seeing middle-class Krystle turn to the Dark Side, to join spoiled slut Fallon and sensitive, gay Steven in pouting with impunity at the dinner table. But then, what kid didn't dream of gold toilet seats and rooms filled with furs and jewels? We wanted to eat roast beast on silver platters and shout at each other over miles of mahogany table, then throw on our riding boots and take our favorite stallion out for a run, only to fall into a grassy ravine, twisting our ankle and requiring a square-jawed stranger to drive us to safety in his jewel-encrusted Jaguar.

The crazy thing is, "Dynasty" holds up pretty well over the years, as long as you're just a little giddy over the incomparable feathering of Linda Evans' hair. When Blake gently prods Fallon to take up with that Colby boy, and she snipes, "You're not talking about a marriage, you're talking about a merger!" your heart rate might spike a little, just enough to have you anxiously awaiting the entrance of Heather Locklear (Sammy Jo), not to mention Joan Collins, whose Cruella de Ville turn as Alexis truly put the "nasty" in "Dynasty." Thank you, Soapnet!

Copy cataclysm!
If confusing an imitation with the genuine article is a major foul in our authenticity-obsessed culture, then my proclaiming Fox's "The Ortegas" "the most original show around" recalls the shame of failing a blind Classic Coke vs. New Coke taste test. Apparently "The Ortegas" is based on a popular BBC comedy called "The Kumars at No. 42," in which an Indian family living in London builds a talk show studio for their son in their backyard. Not only that, but there's an Australian rip-off of the same show called "Greeks on the Roof," which is reportedly "painful."

Monumental missteps aside (I never confused Classic and New Coke, just for the record), one reader wisely pointed out that the success of such international imitations lies in the writers' ability to adapt them to another culture. Thus, while the British "Coupling's" characters are fun because they approximate certain varieties of London hipster, the charmless lovelies of NBC's "Coupling" have little in common with real New Yorkers and, thus, have little in common with "funny." Maybe if they all had British accents?

Still, you have to wonder what kind of a crazy, mixed-up global culture we're living in, that we're all watching copies of each other's sitcoms. If we keep seeing each other's movies and buying each other's food and ripping off each other's most popular ideas, I can tell you right now, we are headed for a dark, dark time indeed, a time when Americans will get the obscure jokes about jelly and football on those nutty British comedies almost as well as people around the world get the crappy jokes from "Bewitched." Memo to the World's People: Don't make us resent the worst that your culture has to offer the way you resent those scary twins on "Full House." You have no grasp of how uncomfortable it is, being born in the country that's responsible for "Knight Rider," and believe us, you don't want to know.

Then again, when I lived in Australia in the mid-'70s, the first graders seemed to think I was pretty cool for being American despite the fact that "Mr. Ed" repeats were running in prime time there. And, I came home with the complete works of ABBA. Maybe sharing is caring after all!

In: Pirates. Out: Tube dresses
The premiere of "Survivor: Pearl Islands" started with a sadistic splash as contestants were forced to hurl themselves from a boat, fully clothed in formal attire, and swim a long, long way to shore, leaving behind the backpacks they hoped to take with them. Instead of the usual first-episode lollygagging, tension was palpable as the two teams scampered through a local village, scrounging up supplies for the days ahead. "Sweetums" look-alike Rupert gave the Drake tribe a bad-karma head start by stealing a bunch of stuff that the Morgan tribe left unguarded, then selling the booty -- which seemed to consist mostly of Size 8 women's wedgies -- to the local villagers. Meanwhile, Drake member Sandra spoke Spanish, enabling real wheeling and dealing where the other team flailed, shouted the same words repeatedly, and then paid too much for everything. Indeed, Drake emerged with everything from barbecued chicken to toothbrushes while Morgan looked positively bewildered and empty-handed.

No surprise, then, that at the immunity challenge, which required lugging a massive cannon through an obstacle course, the pirating Drake team made a strong showing. In a desperate ploy to appear devil-may-care (or to rival last year's Heidi and Jenna Boob Festival), the Morgan men stripped naked during a backup in the race, only to end up flinching and wincing their way through the bramble-covered course. It was a devastating loss for the Morgan team, made all the more shameful by their blushing bare asses. Despite the "weakling" stamp given to middle-aged girl scout Lill and Rob Cesternino-alike Ryan, it was snippy Nicole who was sent packing for her remarks that Tijuana should be the first to go. The way the tribe reacted, it was clear that Nicole had been talking a lot more crap than we saw on camera. Sadly, there was too much shelter-building, fish-spearing and pirating action to warrant an adequate dose of griping, hair-swishing, and eye-rolling action. Which is why we watch "Drunk Asshole Hotel." But good going, Nicole. Way to fly under the radar. When my 15 minutes come along, I hope to God that I'm not wearing a turquoise-blue tube dress.

Rip Torn between two lovers
With the countless premieres lined up for this week, it's tough to catch everything unless you're a shut-in or have three TiVos (insert drooling sounds here). If "The West Wing" premiere constituted your only date with the TV, and you don't get HBO or you dislike what you've seen of "K Street," you might want to check out Rob Lowe's new show, "The Lyon's Den" (Sunday at 10 p.m. on NBC). Lowe plays an idealistic lawyer at a firm staffed with sleazy schemers, but the scope of the show seems to transcend the steady parade of hopeless cases and unrealistic twists found on "The Practice." Judging from the pilot, Lowe might not have been out of his mind for leaving "The West Wing" after all. "The Lyon's Den" looks like a multifaceted drama with a lot of depth, sharp dialogue, a strong cast, and some pretty flashy subplots going for it. But the real reason to watch is to see Rip Torn breathe whiskey-soaked life into his role as Lowe's father, a high-profile senator whose concern for power is the yang to Lowe's scrub-faced do-gooder yin.

Tastes like chicken
Just when you thought "Newlyweds" couldn't get any better than the episode where Jessica Simpson mistakes "Chicken of the Sea" for chicken, the pop princess bride trumps her own finest hour. This week, our new favorite couple are on vacation in the Bahamas, hunkering down for some appetizers with Nick's brother, Drew, and his wife, Leah, when Jessica makes an important discovery.

Leah: (motioning to Buffalo wings) Have you tried these?

Jessica: Then why are they called Buffalo wings?

Nick: Baby, come on. You know that.

Jessica: I don't know this!

Drew: Because barbecue wings started in Buffalo, or something like that. You know, it's kinda weird that buffaloes don't have wings?

Jessica: I never thought about it.

Tune in next week, when Jessica gets confused about corn dogs.

Newsflash: Republican madman in the oval office!
Last night's premiere of "The West Wing" did not disappoint, picking up where last season's excellent finale left off with the kidnapping of the president's daughter, Zoey Bartlet. You'll recall that back in May, President Bartlet (Martin Sheen) opted to invoke the 25th Amendment out of fear that he might behave with irrational vengeance, what with his daughter in the hands of wily terrorists and all. Eerily, the White House staff kept reassuring each other that Bartlet's decision was for the best, soothing worries about any potential conflicts with the ominous refrain "Leo will know what to do." Wait, we're thinking. Will Leo know what to do? Isn't he a little too close to this himself? Didn't he have a drinking problem way back when?

Meanwhile, the hour for back-patting over how honorably Bartlet has behaved in the face of a crisis is over, due mostly to the fact that the new president, formerly known as House Speaker Walken (John Goodman), is immediately proving himself to be a scary Republican whack job. "Find her, and find her fast," Walken intones to the staff. "But if Zoey Bartlet turns up dead, I'm gonna blow the hell out of somethin' and God only knows what happens next." Whoa. The look on Leo's face says it all: Irrational vengeance is this guy's middle name.

Finally, all that idealism comes back to bite the denizens of "The West Wing" on the ass! How long have we been waiting for this? It's like cheering for Cybill Shepherd and Bruce Willis to get down on "Moonlighting" after multiple seasons of watching them bicker. After years of seeing these hopelessly ethical characters one-up each other relentlessly, it's not just nice but dramatically satisfying to witness them at a serious crossroads, with power slipping out of their hands. As Leo and Josh come to the realization, separately, that doing the right thing, in this case, may not have been the right thing to do, the effect is downright chilling.

But pretty much everything about this episode is great. The fact that Walken immediately brings his annoying dog to the Oval Office is just the sort of touch that really brings home the powerlessness and queasy discomfort of the situation. The staff has a sense that the country is slipping out of their control, that they've made a huge mistake, one that might be impossible to undo. There's a veritable madman in power, after all, one who will stop at nothing to send a message, neglecting all feedback that the global community is at odds with him. We can only imagine how horrible they must feel! Their country, at the brink of war, with a bully at the helm!