Bush's tax cuts for the rich have to go, Democrats agreed at Thursday's debate. But when the Vermont doctor took some barbs, he flashed his famous temper. 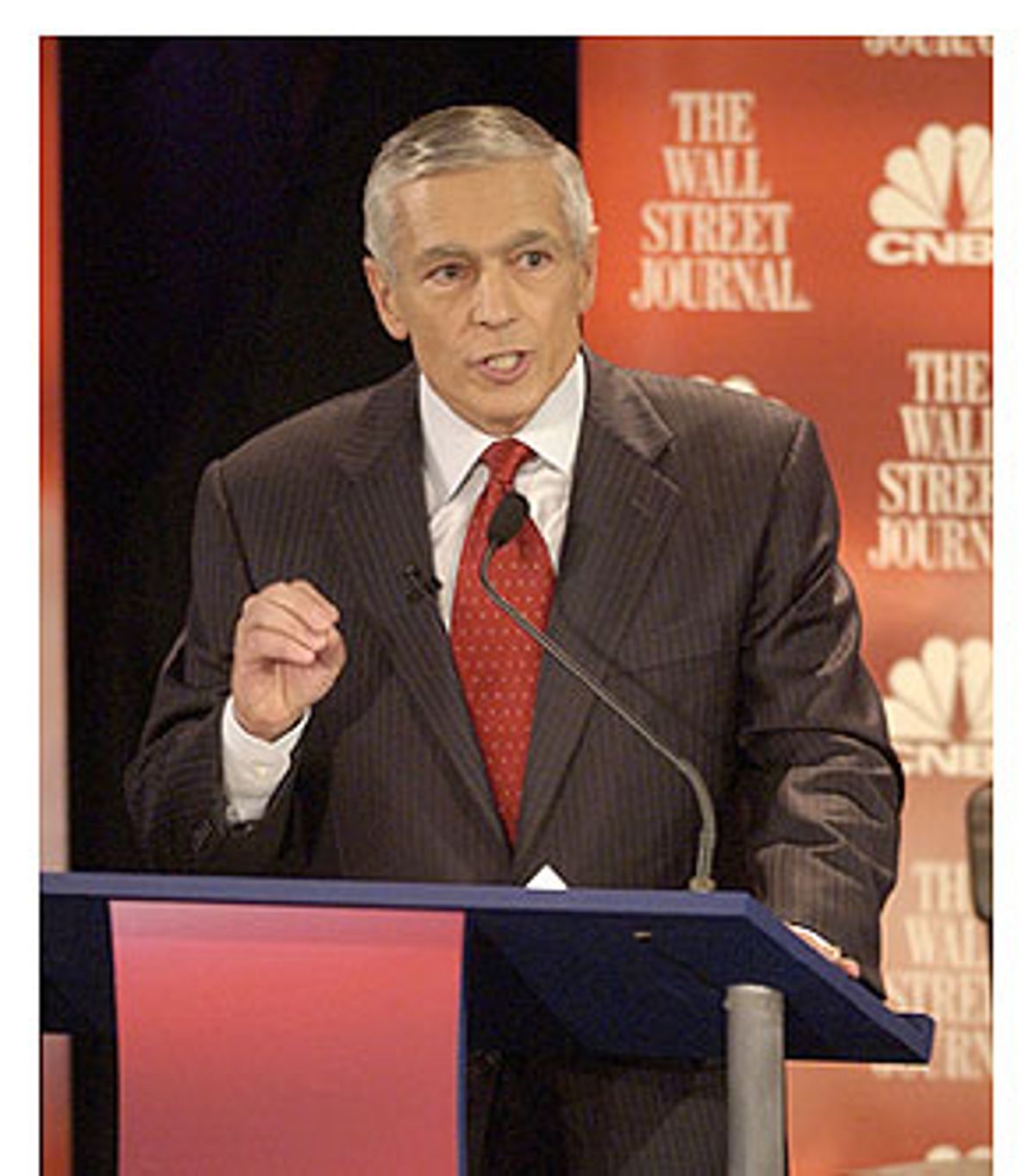 With retired Gen. Wesley Clark's making his debut appearance and a fresh batch of national polls showing President George W. Bush sinking to the lowest approval ratings of his term, Thursday's Democratic debate in New York felt like the real starting point for the race to the White House. And although the debate doubled as Clark's coming-out party, it was Howard Dean, whose surprisingly powerful fundraising machine continues to lap the field, who again found himself sustaining the most attacks. And it was Dean again who flashed his now-famous temper.

First and foremost, of course, the debate served as a communal Bush-bashing session. Sen. John Kerry, D-Mass., warned that if Bush rebuilds Iraq the way he does America, the country will soon have 3 million fewer jobs. Targeting corporate greed and no-bid Iraq-rebuilding contracts for Vice President Dick's Cheney's cronies at Halliburton, Connecticut Sen. Joseph Lieberman complained that with the Bush White House, "the foxes are guarding the foxes, and the middle-class hens are getting plucked." Pause. "I want to make clear I said 'plucked.'"

The night's best line belonged to the Rev. Al Sharpton. Surveying the newly expanded field of candidates, he pronounced it to be "eight professional politicians, an officer and," pointing to himself, "a gentleman."

Early on, most eyes were likely focused on Clark, who, helped by a crush of press attention, has emerged as the field's most intriguing figure. For some Democrats, the retired four-star general represents a dream candidate who has the credentials to attack Republicans on the issue of national security. Others though, are skeptical after Clark's late arrival and his unimpressive first few days on the campaign trail as he seemed to flounder before the national press corps.

But during the debate, supporters must have liked what they saw up on stage. A former member of the West Point debating team, Clark still has the touch. Given the afternoon's first question -- Are you really a Democrat? -- Clark lit up the small screen with a combination of swipes at Bush's "reckless tax cuts," as well as a cogent statement of his Democratic identity: "I am pro-choice, I am pro-affirmative action, I'm pro-environment, pro-health. I believe the United States should engage with allies. We should be a good player in the international community. And we should use force only as a last resort. That's why I'm proud to be a Democrat."

The answer itself was good but not great. But maybe because he's only been a full-time politician for nine days and hasn't had to listen to his own answers dozens or hundreds of times already, Clark seemed genuinely engaged and excited about the prospects of running for president.

Later in the debate, Clark was given a question he probably did not cram for: the possibility of a solvency problem with federally backed mortgage programs such as Fannie Mae. "Home ownership is critical in this country," began his non-answer. But it was a perfectly serviceable non-answer, and he ended on an optimistic, Reagan-esque note by insisting that in a Clark administration, "we'll fix it."

The problem with the two-hour debate was there was not enough Clark, not enough Dean -- not enough anybody, for that matter. With 10 candidates spread out on the stage (just one shy of an NFL squad, noted moderator Brian Williams), along with strict 30- and 60-second limitations on answers and virtually no direct back-and-forth, the debate lacked spontaneity. There was little of the free-wheeling verbal combat featured in Wednesday night's raucous California recall debate. Until the presidential field is trimmed or a freer format is adopted, the debates will do little to educate voters.

Worse, some Democratic candidates on Thursday just disappeared for chunks at a time from the debate flow. There were stretches of 10, even 15 minutes straight, when Clark or Dean or Kerry simply never spoke; minutes ticked by while others droned on about the single-payer healthcare system. Unless you plan your Sunday nights around "K Street," the debate was definitely a Tivo affair.

One key fast-forward spot however, came about an hour in when Rep. Dick Gephardt, D-Mo., revived his attack on Dean and Medicare. Gephardt suggested that back in the 1990s, during the Democrats' "darkest hour," then-governor Dean stood by former Republican Speaker Newt Gingrich in calling for a $270 billion cut in Medicare.

Mocking Dean's rhetoric about political pretenders and how he represents the Democratic wing of the Democratic Party, Gephardt said, "I think you're just winging it."

"That is flat-out false, and I'm ashamed that you would compare me with Newt Gingrich," Dean the doctor shot back. "Nobody up here deserves to be compared to Newt Gingrich." There was a real fire in Dean's glare when he said it, like he wanted to kick Gephardt's ass. The Missouri congressman just smiled back, enjoying his time spent underneath Dean's skin.

Dean's sharp temper is not a media creation. It's for real. And following the exchange, Sharpton had some sage advice for Dean: "Don't get too personal, brother Howard."

On other occasions, Dean fended off attacks more gracefully. He laughed off a reference to Lieberman's warning about the "Dean depression" that would supposedly ensue if the governor's economic plan were ever implemented. Later, Kerry leveled a charge that, if the current middle-class tax cuts were completely repealed, as Dean has urged, hardworking lower- and middle-class families would suffer. "With all due respect," Dean responded, it was promise-them-everything politicians like Kerry who passed the irresponsible tax cut.

Dean smartly turned the issue into insider/outsider one, and gave himself the starring role of the plain-talking reformer. "Tell the truth," he urged Kerry.

Democrats are giddy over their quickly improving White House prospects for one reason, best captured in a question from last week's Newsweek poll: "In general, would you like to see George W. Bush reelected to another term as president, or not?" The response was 44 percent yes, 50 percent no.

White House insiders show no signs of panic about the polls, the economy or the situation in Iraq. But historians among them must know that precisely 12 years ago, in late September 1991, then-president George H.W. Bush enjoyed an approval rating of 64 percent in a survey by the same Wall Street Journal polling operation. Even more troubling for the current president, Bush Sr. had just a 41 percent job approval for his handling of the economy. Young Bush, according to the latest Wall Street Journal poll, wins just 43 percent approval for his economic smarts.