Sensitive, feminized and resentful, today's young men no longer have the sexual authority to please a woman -- no matter how much oral sex they perform. 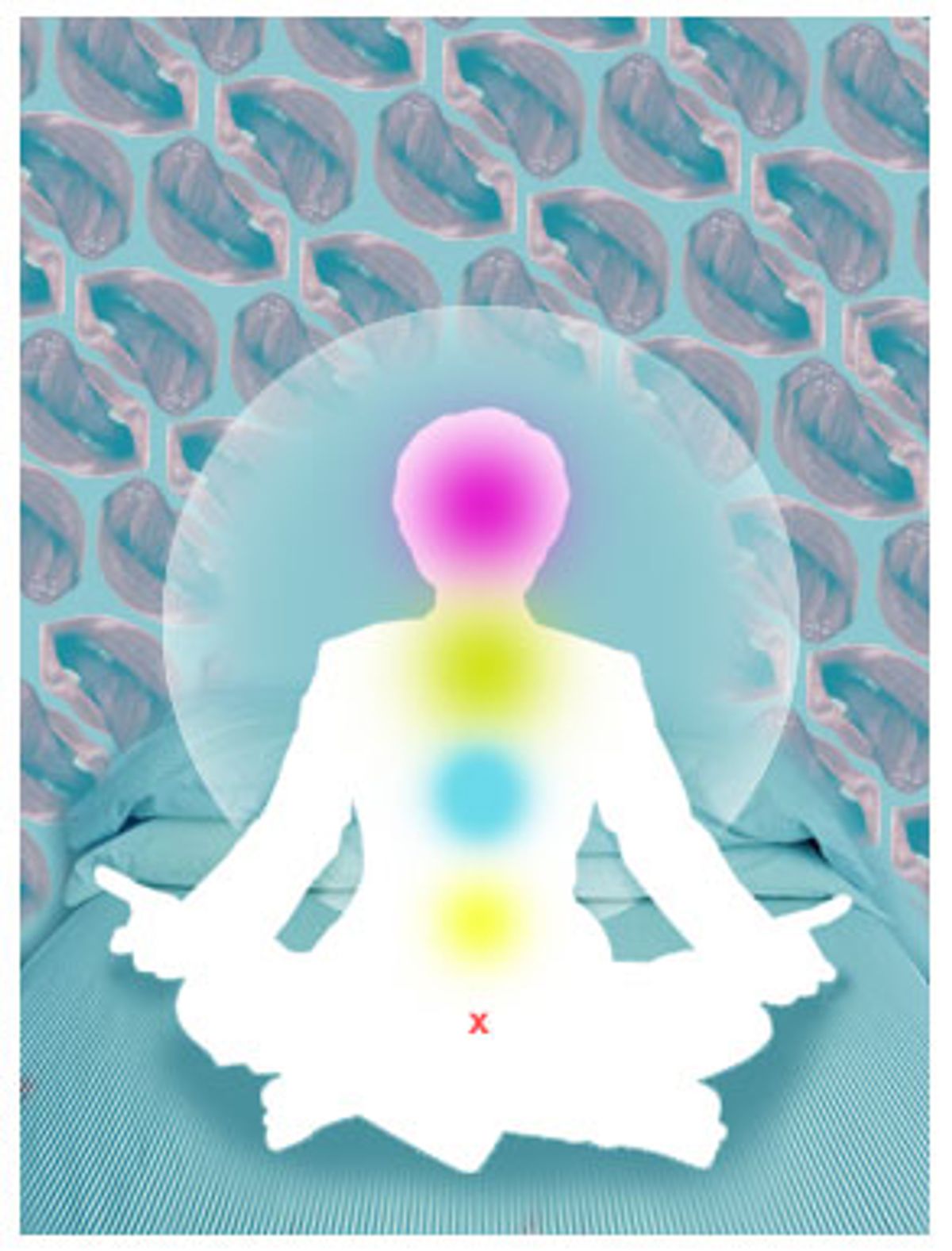 It was after seeing "Thirteen" and noticing the display rack of handcuffs at Sam Goody on Sixth Avenue that it hit me: The polymorphously perverse, gender-is-just-a-construct future that radical feminists and academics used to dream of has actually arrived. Men no longer have any authority, either in their own eyes or in women's, the genders are distinguished socially mainly by stuff they buy, and eroticism has fled from the bedroom to the store. It's sexier for most of us to go shopping than to make love, and so we do. As a friend said when I told her I'd spent much of the weekend in bed with a man, "Who has time for that? The weekend is the only chance I have to do my shopping."

And handcuffs -- well, seeing them at Sam Goody made me wistful. Once upon a time, you could still shock a guy by pulling them out. I suspect that there's a connection between the collapse of masculine authority and the mainstreaming of S/M; neither gender is too good at distinguishing power and authority, and nostalgia for male authority can translate into fetishizing symbols of power. Women secretly want men with authority, but they fall for insecure passive-aggressive guys who view every aspect of life as a power struggle, or for cranky killjoys or petty sadists.

The collapse of the patriarchy was supposed to make women happy -- we were supposed to get more sex, freer sex, better sex, more loving sex and better relations between men and women. If you went to an Ivy League college in the last 20 years or had a professor who did, you probably heard something about this.

This is especially true of those in their 20s. Here's a relevant confession: Ever since I've been in my early 30s I've tended to date younger men. I'm now 45, and in the last five years I haven't been able to get interested in men in their 20s, no matter how cute or buff. Men in their 20s -- well, the Ivy League, professional sorts I meet, with their yoga classes and exquisite sensitivity about treating a woman any differently from a man -- just aren't masculine enough to be bedable.

Thus the legacy of two decades of feminism in academia. Younger people have bought into the idea that your lover or spouse is a friend of the opposite sex -- although one who will exhibit bad manners you wouldn't expect from your friends' pets, much less your friends. The bad manners and androgyny go hand in hand; along with the erotic aura, tenderness and respect have disappeared. These young guys feel free to admit to physical fears, grooming preoccupations and social anxieties their fathers had the good sense to conceal, if they had them. They dress like overgrown toddlers, in oversize T-shirts and baggy pants, clothing that begs you not to take them seriously as grown-ups. They're pussy-whipped and tamed by 30, but just below the surface they seethe with hostility and resentment at women, because they're quite aware that their girlfriends or wives treat sex as a commodity to be doled out in return for something better. Neither the young men nor the young women enjoy it as much as they were told they would. Maybe the situation is worse for the women because, after all, it's the men who are more like women, not the women who are more like men.

The women have won, if you've won when you have worse sex than your grandmother did. Secretly they don't find these men very exciting, either. And they don't feel feminine when they're with them. What does "feminine" mean anyway, besides the result of a lot of grooming rituals drag queens can do too? Maybe it means having a baby. Sex is for corralling a man long enough to secure a "commitment" and then a baby.

The new joylessness: Talk with someone in their 20s about marriage and they bring in the word "work" in the first three minutes. I didn't think like that when I was with a man for seven years in my 20s, and I don't recall that my friends did either. This "work" goes along with the ubiquitous use of the word "relationship" in the romantic sphere, a word first used for a sexual connection in 1944, according to the OED; before that it was only used in a business context. And now that the patriarchy's gone, everything isn't pleasure, as radical theorists imagined, but business.

It makes perfect sense that the most popular sex act among younger people is oral sex, which lends itself so well to exchange. One for you, one for me. Check any online dating service and you'd have the impression that the male sex organ was the tongue. A recent scan revealed that of the 4,108 men on Craig's List seeking women for "casual encounters," 209 used the word "fuck" in their ads, 219 referred to their "tongue" and 363 to their "oral" predilections. Heaven knows what the rest of them planned to do in bed.

Oral sex is what American women say they want, and they have their men trained to do it, but do either men or women really prefer it to intercourse? No one dares say it, but the clitoral orgasm might be as much a myth as the vaginal -- or as little. If you return to the original article that debunked the idea that women enjoy fucking, Anne Koedt's "The Myth of the Vaginal Orgasm" (1970), you'll notice that she gave no medical evidence for her belief that the clitoris rather than the vagina is the source of female sexual pleasure. You'll also notice that she has a strong aversion to the vagina. It's one thing to say that women only have clitoral orgasms, but one doubts the sanity of someone who writes that "women need no anesthesia inside the vagina during surgery." Who's first in line for that?

My bet is that just as many or more women have orgasms from fucking as from oral sex while many others don't have either and fake them. That's right, they fake the clitoral orgasms their boyfriends congratulate themselves on having the sensitivity to bestow. If we're ready to believe that many women fake vaginal orgasms, even over many years with their husbands, why are we so sure some women don't fake their clitoral orgasms too? It's likely that many men believe they can tell more easily that way -- and that, not some extraordinary new access to kindness and generosity, might be the source of the new male "enthusiasm" for oral sex. But pin them down and they'll admit they can't be sure.

Meanwhile, women who have orgasms from being fucked have learned to be quiet about it. Fucking is a suspect preference these days, as handcuffs used to be; after all, everyone knows that penetration is politically incorrect, involving all sorts of issues of gender difference and dominance and submission. Women who want a man to do what only a man can do in bed have to stick to over-40s or men from the Third World who haven't heard that they're supposed to pretend to like cunnilingus. But most American men have to pretend if they want to get laid, just as many women over the millennia have pretended to enjoy intercourse.

The new American ideal is an equal relationship, satisfying our craving for justice and for simplicity. When I hear American women in their 20s and early 30s talk about their boyfriends, they seem preoccupied with whether they do 50 percent of the dishes and whether they spend 50 percent of the time talking about their problems and anxieties. Of course this is compensation for years of institutionalized unfairness, but it also sounds a lot like a defense against the powerful feelings they have for the men they love. And so with oral sex. It fits the 50-50 ethos better than fucking.

It also fits our new suspicion of deep emotions. Another reason fucking is out of fashion is that it makes us feel too much. Part of the appeal of oral sex -- and why it is rapidly becoming a favorite of teenagers -- is that it's lite sex. No one loses control, loses track of where they are, forgets that music is playing, screams, or weeps, when someone performs oral sex on them. But fucking stirs deep emotions that go to our core as animals and humans. And with the absence of tenderness and trust between men and women, we're more and more inclined to banish deep emotion from our post-patriarchal lives.

What's often lost in the insistence on equality is quality -- how the people feel about each other, how much love they can give each other. We now feel queasy about the romantic language of our ancestors, who used the metaphors of slavery and devotion unabashedly. But is there another language with which to speak of love? Love does involve two people putting themselves in the power of each other. We've forgotten that what we are looking for between men and women is fairness and compassion, not identity, and there can be justice between people who acknowledge that their balance of power is unequal. The heterosexual act of love does involve women putting themselves literally in the power of men. And we no longer trust enough to do so.